And that's part of the charm of this old-school "Saloon & Eatery," which still hearkens back to an era when stained glass windows and ornate wooden bars were the norm and hospitality was the name of the game.

Speaking of the bar, you can pull right up to it and enjoy a fish fry every Friday beginning at 11 a.m. Options include fried or baked cod in two, three or four piece servings ($9.50, $11.50 or $13.50), lake perch ($13) or a combo fry that includes two pieces of cod, two pieces of perch and three shrimp for $16.50. Each fish fry comes with buttered marble rye, housemade cole slaw and tartar sauce and your choice of side (housemade chips, spicy vermouth carrots, a cup of soup, french fries or potato pancakes). 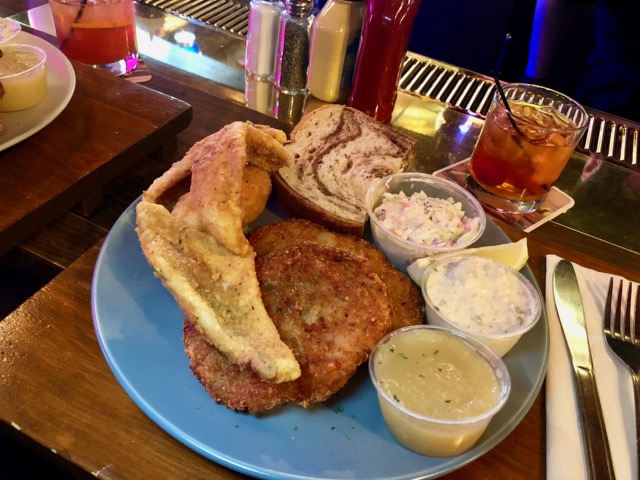 The lunch portion of lake perch included two butterflied fillets. The perch were lightly coated in seasoned flour, so the exterior was slightly crisp while the interior was tender and moist. Overall a solid standard preparation for the lake fish.

Meanwhile, the cod offered a nice surprise. The fillets were thinner than many, but they sported a well-seasoned mid-weight breading that added plenty of flavor without completely overpowering the fish.

Sadly, I didn’t find the potato pancakes to be very remarkable. Count these among the ranks of potato pancakes that very closely resemble hash browns. The standardized (scallop shaped) patties were faultlessly crisp, but still somewhat dense. They hadn’t been fully drained, so they erred on the greasier side. As for their flavor; they were potato-forward with a moderate onion flavor.

My recommendation: opt for the spicy vermouth carrots instead. They’re not particularly spicy, but they’re quite delicious.

If you’re looking for very sweet, this is not your old fashioned. My drink was definitely brandy forward with just a hint of sweetness and a few residual sugar crystals in the bottom of the glass.There was no muddled fruit, but there was both a cherry and orange in the glass.