We arrived at about 6:30 p.m. and there was already quite the crowd; in fact there was exactly one open table in the entire place. The crowd did make the restaurant quite loud, and that was exacerbated by louder-than-average music. So, if you’re looking for a quiet place to chat with your dining companions, this may not be the place for you. However, if you like a place with a sports bar vibe, a busy hum and a solid fish fry, it’s definitely worth your while.

On Fridays, guests have the option of ordering off the regular menu. But there are also fish fry options that include beer battered cod ($9.99), baked cod ($10.99), beer battered perch ($13.99), or a fried combo platter featuring two pieces of beer-battered perch, one piece of cod and six beer-battered shrimp ($15.99). Each comes with coleslaw, lightly buttered marble rye and a choice of sides including fries, waffle fries, potato pancakes, macaroni and cheese, salad, housemade tater tots or hushpuppies. 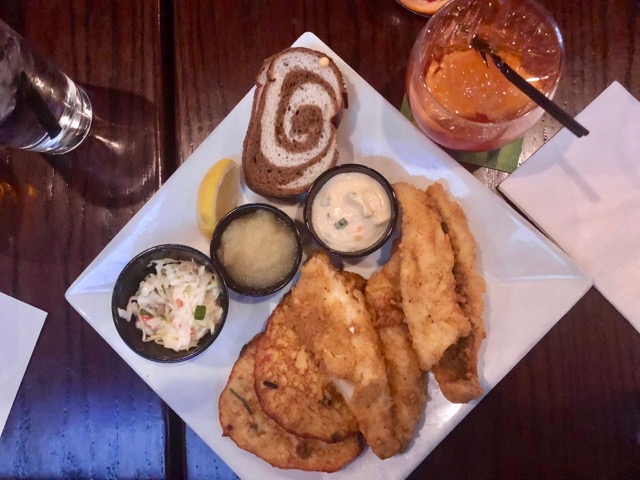 The perch plate came with four good sized pieces of perch. The fish itself was moist and nicely flavored, but the batter – which was crisp and light – was a bit too salty, obscuring any beer flavor it may have offered. The batter itself also had a tendency to flake off of the fish, leaving my plate with a piece or two that were sketchily battered.

The cod, which was flavorful and moist, sported the same batter; however, thanks to the thickness of the fish itself, the saltiness was much less prominent. Seems like a small tweak to the recipe might just be key to taking this fish to the next level.

The potato pancakes weren’t quite my speed, as I prefer my pancakes to be crisp and irregular with plenty of stray edges to nibble. But that isn’t to say they weren’t good. Unlike many served around town, these potato pancakes were true to their name, possessing a very pancake-like texture. They were light, almost fluffy, and their flavor was potato-forward with a hint of onion from the scallions in the batter.

The old fashioned at Brass Tap was a nicely balanced cocktail that wasn’t too sweet. There was a hint of bitters and visible muddling. In fact, if I were to take issue with it in any sense, it was simply that it was a bit lighter on the brandy than I might have liked.