Thank Cod it's Fryday: The Schwabenhof

This end-of-April fish fry marks the last of the season. Those who've looked forward to hearing about a new fish fry each week can look forward to the series again this fall. In the meantime, we've wrapped things up with one of the areas most classic fish fries.

In this series, we’re trying out some of the city’s most popular fish fries. You’ll find commentary, pro tips and ratings of the three staples of a classic Wisconsin fry: namely the fish, the potato pancakes and the classic Wisconsin style brandy old fashioned.  View all fish fry reviews here.

This end-of-April fish fry marks the last of my fish fry reviews for the season, as I make room for a new summer series (stay tuned for that in the coming weeks). For those who’ve looked forward to hearing about a new fish fry each week, you can rest assured that I’ll resume the series again as the weather cools in the autumn. In the meantime, I’m wrapping things up with what might be considered one of the area's most classic fish fries.

The Schwabenhof was founded in 1968 as home to the United Donauschwaben of Milwaukee, a Germanic cultural organization with roots that date back to the 1950s. It’s a venue with old school flair, from its cozy bar to its dining areas, a good portion of which were refreshed this summer with the goal of giving them the look and feel of a classic German beer hall.

It’s among just a few remaining places that continue to preserve the area’s German heritage, through both cultural offerings, a biergarten and a restaurant which has served up its popular fish fry for 30 years, and now offers a full menu that includes both Wisconsin favorites and traditional Germanic fare.

Fish fry offerings, which are served all week long, include fried perch, walleye or cod accompanied by housemade tartar sauce, creamy cole slaw, rye bread and a choice of potato (baked, french fries or potato pancakes). Pricing is $15.95 for perch or walleye and $13.95 for all-you-can-eat cod (or a combination of cod and broasted chicken). Baked cod in lemon, caper, and butter sauce is also available for $16.95, served with baked potato and green beans. 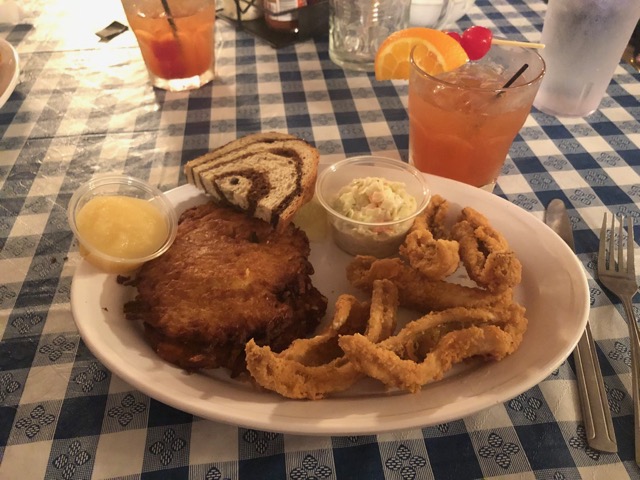 While I’m normally a fan of the lake fish option (notably perch), if I had it to do all over again at The Schwabenhof, I'd likely have opted for the cod (or potentially the walleye). The fish, which is comprised of battered cod loin (rather than fillets) is of a good quality, with a tender flaky interior and a crisp, well seasoned crust. A good example of fried cod cooked well.

The perch fillets (which came five to the plate), on the other hand, were crisp and the light dredge of seasoned flour was flavorful. However, the fillets themselves had been overcooked and lost their tenderness. They were tightly curled with a slightly chewy texture, an indication that they'd given up too much of their innate moisture during the cooking process. It was a busy night, so my guess is that these petite fillets were the simple victim of a few too many moments in the fryer.

The potato pancakes were delicious. These classic cakes were filled with tender shredded potato. Their exterior was nicely browned and very crisp – an impressive feat, considering the sheer volume of plates served on any given Friday. They were well seasoned and flavorful with a nice onion flavor. There's a reason these are a favorite item each year at German Fest.

Meanwhile, the old fashioned was a fair rendition of the classic. There wasn’t any visibly muddled fruit, but the mix used to make the cocktail was redolent of clove, a good indication of the presence of Angostura bitters. It was sweet (but not cloyingly so) and somewhat sparse in brandy flavor. A bit more balance and this cocktail has the potential to be a solid version of the classic.