Victor's is a bit of an anomaly. In the afternoon and early evening, it's a classic bar. In the evening, it's a hoppin' nightclub. But, if there's one thing we've heard over and over again, it's that Victor's has great food. So we tested out the fish fry.

In this series, we’re trying out some of the city’s most popular fish fries. You’ll find commentary, pro tips and ratings of the three staples of a classic Wisconsin fry: namely the fish, the potato pancakes, and the classic Wisconsin-style brandy old fashioned. View all fish fry reviews here.

I've always viewed Victor’s as a bit of an anomaly. In the afternoon, it could be just about any other old school bar. There's Frank Sinatra on the stereo and the bar is filled with a mix of folks – mostly older – who dropped over for a drink or early dinner. Conversely, by night, it’s a popular (and often crowded) nightclub that sports a distinctly 1970s vibe and attracts an exceedingly diverse crowd. Incidentally, Victor's has also developed quite the reputation over the years (either good or bad, depending on who you ask).

But, if there's one consistent thing I've heard from people over the years it's this: Victor's has great food. And the Friday night fish fry seemed like as good a time as any to try it out.

On our visit, which began fairly early on a Friday evening, we dined with older gentlemen wearing power sweaters and colored sport coats. Some were with their wives; others hung out at the bar solo or with a friend or two. There were also groups of middle aged women in glittery silver lamé tops and tables of millennials decked out in hoodies and jeans.

The remnants of the holidays remained, including strings of old school bulbs, silver wreaths donned with multi-colored lights and glittery twinkling icicles hanging from the ceiling. But none of it looked out of place. After all, Victor’s is an eternal haven for kitsch. It’s like a candid photo taken right out of the 1970s, complete with a red carpeted bar, big leather booths set against mirrored walls and black acoustic tile pressing down from the ceiling. 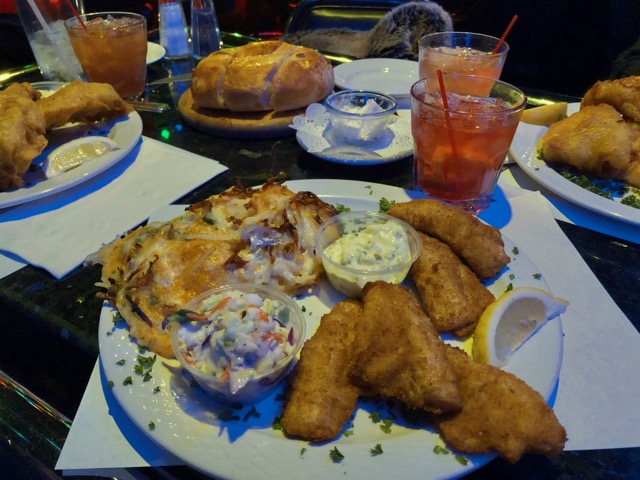 The perch at Victor’s is plentiful, enough so that you’re unlikely to be jealous if your dining companions order the all-you-can-eat cod. It’s covered in a breadcrumb-like coating that’s somewhere in the middle in terms of heft. The crust was crisp and browned (and only a little bit greasy) and bore an unusual sweetness that I could only imagine came from the type of bread used. The fish itself was tender and relatively mild, with only a hint of lake-fishiness. Not my favorite preparation of perch, but it was relatively solid.

On the all-you-can-eat side, I’d defy anyone to eat more than that four gigantic pieces of cod that arrived on each plate. The moist fish was enrobed in an ultra crisp, yeasty beer batter that was good but soaked up the frying oil in a way that I found slightly off-putting after a few bites.

Oops. Just 15 fish fries in and I've already accidentally violated my own rule (namely: the fish fry must feature potato pancakes). In my defense, I could’ve sworn Victor’s had potato pancakes. But, as it turns out, that was either wishful thinking on my part or an offering that has since been 86’d.

In either case, by the time I'd discovered that a key component of the meal was missing, it was too late to turn back. So, I ordered the next best thing: cheesy hash browns.

My justification is thus: It is a real shame, but I've found that an increasing number of restaurants get away with serving ready-made potato pancakes (many of which are strikingly similar to hash brown patties). So, truly, another version of breakfast potatoes isn't all that far off. And, if I'm honest, the idea of cheesy hash browns sounded pretty good.

What I received was a monstrous mound of shredded hash brown potatoes topped with enough cheddar cheese that the potatoes were almost completely obscured. Too much cheese? It depends who you ask. Delicious, yes. Healthy, not so much. I took most of mine home and ate them for breakfast the next day.

While I might be tempted by a pleading friend to go to Victor’s for fish fry again, I’d be unlikely to re-order an old fashioned from the bar. This one is sweet with a hint of bitters and a sufficient amount of brandy. However, the cherry flavor is overpowering, making it reminiscent of a slightly boozy Shirley Temple.