In this series, we're trying out some of Milwaukee's most popular fish fries, serving up commentary, fun facts, pro tips and ratings of the three foundational elements of a classic Wisconsin fry: the fish, the potato pancakes and the classic brandy old fashioned.

In this series, we're trying out some of the Milwaukee area's most popular fish fries. In each article, you'll find commentary, fun facts, pro tips and ratings of the three foundational elements of a classic Wisconsin fry: the fish, the potato pancakes and the classic Wisconsin-style brandy old fashioned. While we're enjoying our fish fries, weekly Burger Trail articles will post on Mondays (follow along here). View all fish fry reviews here.

Wegner’s St. Martins Inn has been serving steak, sandwiches, Italian dishes and Old World German specialties like schnitzel, sauerbraten and beef rouladen since 1997. It’s atmosphere is classic Wisconsin, featuring a large bar and cozy dining room sporting automobile and racing memorabilia on its walls. At the helm is owner and chef Dennis J. Wegner, an MATC graduate whose experience includes work at The Anchorage and Mader’s; he was also part of the opening team at Grenadier’s under Chef Knut Apitz.

But, Wegner’s may be best known for its fish fry, which attracts hundreds of hungry patrons each week with offerings like Icelandic haddock or hand-breaded yellow lake perch served up with coleslaw, a choice of potato, marble rye bread and tartar sauce. Pricing is $9.95 for three pieces of haddock or $11.95 for four; perch is $14.75. Or you can get a combination of haddock and perch for $13.75. Other seafood options include fried jumbo shrimp, pan-seared orange roughy, cajun-style salmon, steamed haddock or the ultimate sampler platter featuring beer battered and steamed Icelandic haddock, shrimp, scallops, and fresh lake perch.

Pro tip: Don’t hesitate to order the clam chowder. It’s creamy and loaded with chunks of skin-on red potatoes, along with visible bits of clam, celery and red pepper. A cup will put you back by $2.95. 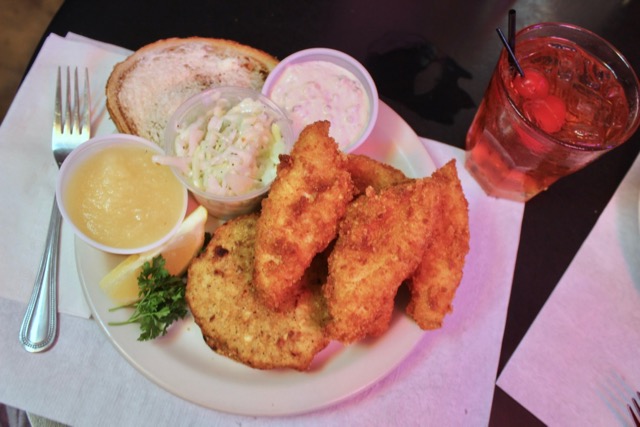 In terms of lake fish, Wegner’s offers one option: hand-breaded perch, which we tried along with beer-battered Icelandic haddock.

The perch comes in whole filets, with a light crispy breading. The fish itself is moist and delicate with a mild flavor and great texture. The beer-battered haddock was a bit on the greasy side in comparison, as the oil gathered in the nooks and crannies of the crisp batter; but the exterior was nice and crisp and the fish was full-flavored.

Both fish came generously portioned along with the prerequisite sides.

Visibly, Wegner’s potato pancakes look like they could go either way. They have a conspicuously molded shape (that means no delicious crispy, straggly edges) and they came out of the kitchen glistening with residual grease from frying. That said, they had a really nice flavor. They were well seasoned and crisp, with a visible presence of onion and spices in the mix. I’d definitely choose them again over French fries.

Wegner’s is a good bet on a lot of fronts, but I’d be likely to skip the Old Fashioned next time. It was heavy on the soda and light on the brandy with a faint hint of bitters, and no evidence of muddling. In my opinion, it tasted quite a bit more like a jazzed up Shirley Temple than an Old Fashioned.