A year and a half ago, John Sidoff sold Hooligan’s, 2017 E. North Ave., to his longtime manager, Mark Buesing. Sidoff took over Hooligan’s in 1978 – which originally opened in 1890 – but decided after 35 years he was ready to get out of the food business.

Five years ago, Sidoff and his wife, Cindy, purchased Von Trier, 2235 N. Farwell Ave., and ran both places; however, he decided to focus solely on lounge ownership.

"I was tired of running a restaurant," says Sidoff. "I thought I’d just run a cocktail lounge and be happy for the rest of my life, drinking red wine at end of the bar. But the problem is, it’s very hard to make it as a lounge and I realized we needed to add food if the place was going to continue to grow."

In 2012, Sidoff made his first attempt to offer a limited food menu at Von Trier, hiring Christian Schroeder (later of Nourri and currently at Buckley's). The effort didn’t work, in part because the kitchen at the time was what Sidoff calls a "glorified prep kitchen.

"I hired a chef, a very talented guy, but he wanted to do too much and the space didn’t lend itself to that, so in a fit of being an angry old man I shut down the kitchen for a year and a half, but then decided I had to try it again," he says.

Over the past few months, the kitchen was significantly remodeled and last week Von Trier unveiled a light German menu.

All of Von Trier’s sausages come from Bavaria Sausage, a 50-year-old German sausage business located in Fitchburg. Sausage offerings include smoked duck sausage, smoked pork and crawfish sausage, bacon cheddar sausage, andouille sausage and a creole sausage. All of the sausages are $8.

The menu also features a curry bratwurst ($6), knackwurst ($7), bockwurst ($7) and a couple of sausage and meat samplers including the $8 "Leberwurst Teller" with braunschweiger liverwurst, goose liver pate and liver sausage.

Appetizers include the mandatory German pretzel for $7 or $9 with a side of garlic dill quark (traditional, spreadable German cheese). Possibly the most unique item is the Bayerische Rettichteller, spiral-cut daikon radishes salted with sea salt and served with rye bread and butter for $3.50. 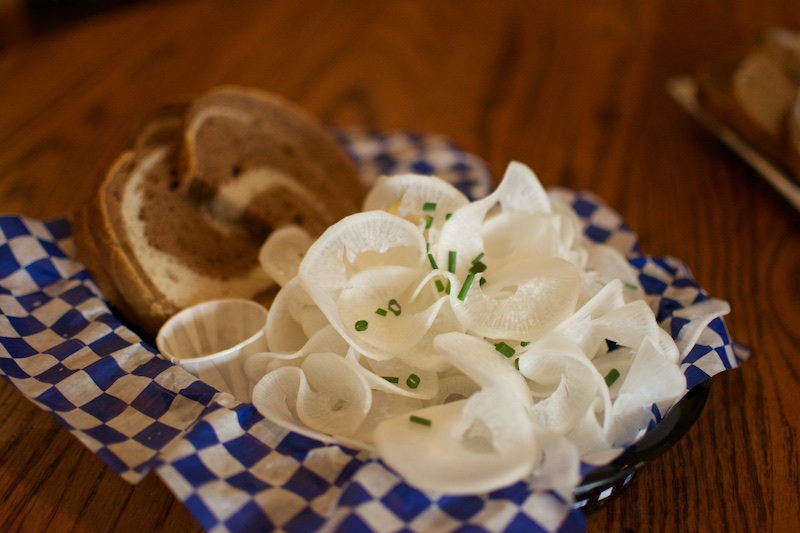 Spiral-cut radishes with a side of rye bread.


Many of the menu items are served with bread, potato salad and / or imported German condiments including sauerkraut, multiple kinds of mustard and a curry ketchup.

For now, Von Trier’s kitchen is open Tuesday through Sunday from 5 to 10 p.m. In the future, Sidoff says he may offer entrees like pork shanks and schnitzels, Saturday and Sunday lunches and late-night dining options.

"We’re starting off slowly," he says.

Sidoff is also making a few changes to the decor. Recently, he removed the large antler chandelier from the dining room for cleaning and restoration. Upon its return, he will rehang it on the bar side of the building. The chandelier was originally in the entrance of The Pabst Mansion and, much to Sidoff’s surprise when informed by the restoration company, is worth around $100,000.

"The detail of the craftsmanship is amazing," he says.

The Farwell Avenue building has housed a bar for almost a century. It was originally called Redier’s until 1978 when Karl Lotharius, the owner of a Downtown disco called Oliver’s, purchased the bar and renamed it Von Trier after a town in Germany.

In 1981, Lotharius was struck by an arrow outside his home on Murray Avenue and died. Bar manager Mark Eckert eventually purchased the building. The Sidoffs purchased Von Trier from Eckert in 2009.

Although he has a lot of possible plans for the future of Von Trier, Sidoff says he is focusing, for now, on offering quality food that people can relax and enjoy or consume quickly before or after a movie or show.

"North Avenue has lost some full-service restaurants and I think this will be a nice addition to the area," says Sidoff. "The East Side’s been good to me." 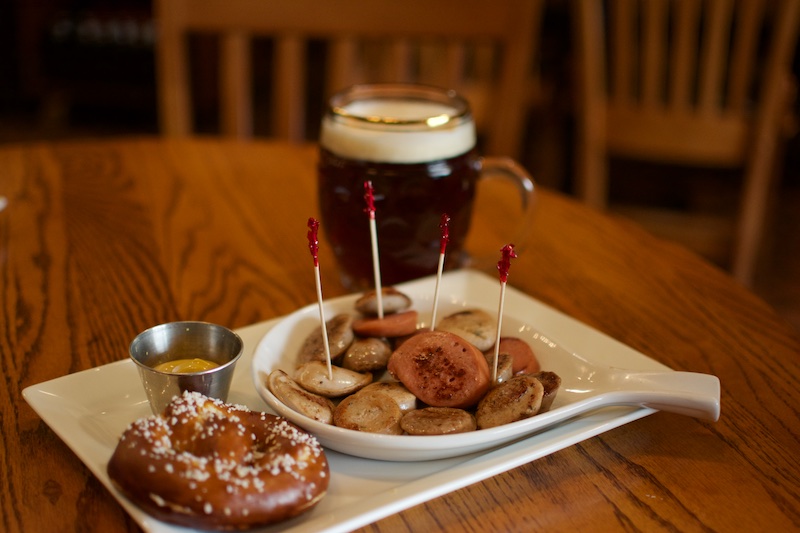 Application seeks to add East Side homes to historic district