A new proposal would replace two former branch libraries with health clinics. One of them would be the Midcentury Modern gem on 14th and Forest Home.

Two years ago, I wrote that the City of Milwaukee had listed the former Forest Home Library for sale after it was replaced with a new branch a bit east on Mitchell Street.

While Voces de la Frontera had considered buying the building, at 1432 W. Forest Home Ave., that plan fell through, and now a new plan calls for tearing down the 1966 Midcentury Modern library designed by architect Robert Van Lanen of von Grossmann, Burroughs, Van Lanen and Associates, and replacing it with a medical clinic. 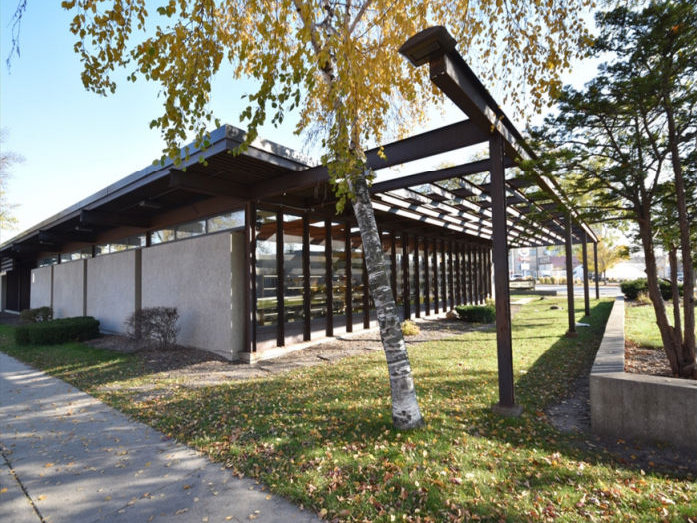 In fact, the proposal that's afoot would have Children's Hospital of Wisconsin erecting a new $5.4 million clinic at the site.

In a Facebook post on Wednesday, the Milwaukee Preservation Alliance wrote, "We're lucky in Milwaukee to have an incredible collection of late 19th and early 20th century architecture, but we also have a treasure trove of more recent gems from the mid-century period. It is tempting to think of Modernist buildings as too new to be historic, but just as Victorian was in danger in the 1920s and Art Deco became endangered by the mid century, we have regularly and unfortunately struggled to recognize the value of the recent past until it's too late.

"Modernism IS significant, however, and we must begin to wrestle with its value and what we can do to protect it in the face of increased danger."

UPDATE: On Thursday, the City of Milwaukee's Historic Preservation Commission received an application from Kelsey Kuehn and Eric Vogel of Vogel Design Group to grant temporary and permanent historic designation on the building an attempt to save it. A public meeting has been scheduled for Monday, Nov. 2 at 3 p.m. at City Hall.

The Historic Preservation Commission will hold a public meeting regarding the application for Temporary Designation within the next 20 days to determine if the property will be given temporary historic status.

"We do very much support the use of the property for a health center but believe there can be a win-win where the health center and building coexist," said Milwaukee Preservation Alliance Executive Director Jeremy Ebersole.