A former lead mining village that is remarkably preserved as a shopping- and entertainment-focused town along the banks of the Galena River, not far from the mighty Mississippi, Galena, Illinois, is just under a three-hour drive from Milwaukee.

As we stood in darkness outside the gates of the old city cemetery in Galena, those of us in the group taking the 8 p.m. Amelia’s Galena Ghost Tour took turns holding electronic ghost-finding devices that occasionally buzzed and illuminated. Others grasped with both hands a pair thin metal divining rods that appeared to move at the whim of unseen forces swirling around us in the ether.

Whether or not we connected with real ghosts at that moment, I did, during a weekend getaway, tap into the spirit of Galena.

A former lead mining town that is remarkably preserved along the banks of the Galena River, not far from the mighty Mississippi, Galena, Illinois, is just under a three-hour drive from Milwaukee. 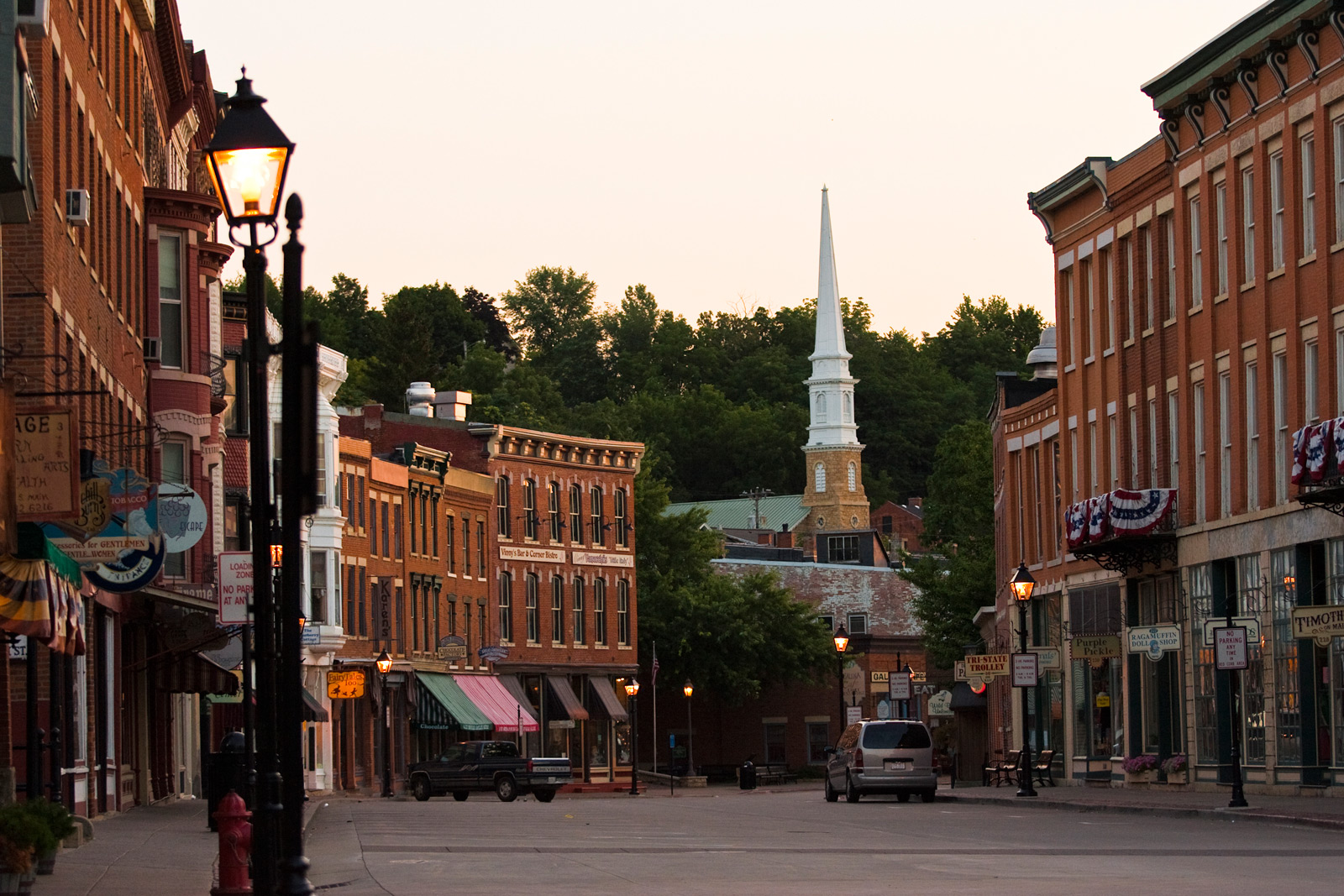 The red brick and pale stone buildings that were built by what was a hard-workin’ and hard-drinkin’ town are now home to one of the most charming shopping- and dining-focused districts you’ll find in the United States.

Galena – in the far northwestern part of Illinois, near the locus of the Iowa and Wisconsin borders – is not only a great place to stock up on candles, taffy and seasonal holiday decorations. The town – briefly home to Ulysses S. Grant, general and president – is also full of history and gawk-worthy residential and commercial architecture.

Grant is most definitely a key part of the Galena spirit and you’ll see his name and image everywhere. You can also do a deep dive into his life by visiting the house in which his family lived, on and off, for a couple years, as well as the U.S. Grant Museum, perched on Bench Street, above the gently curving Main Street. 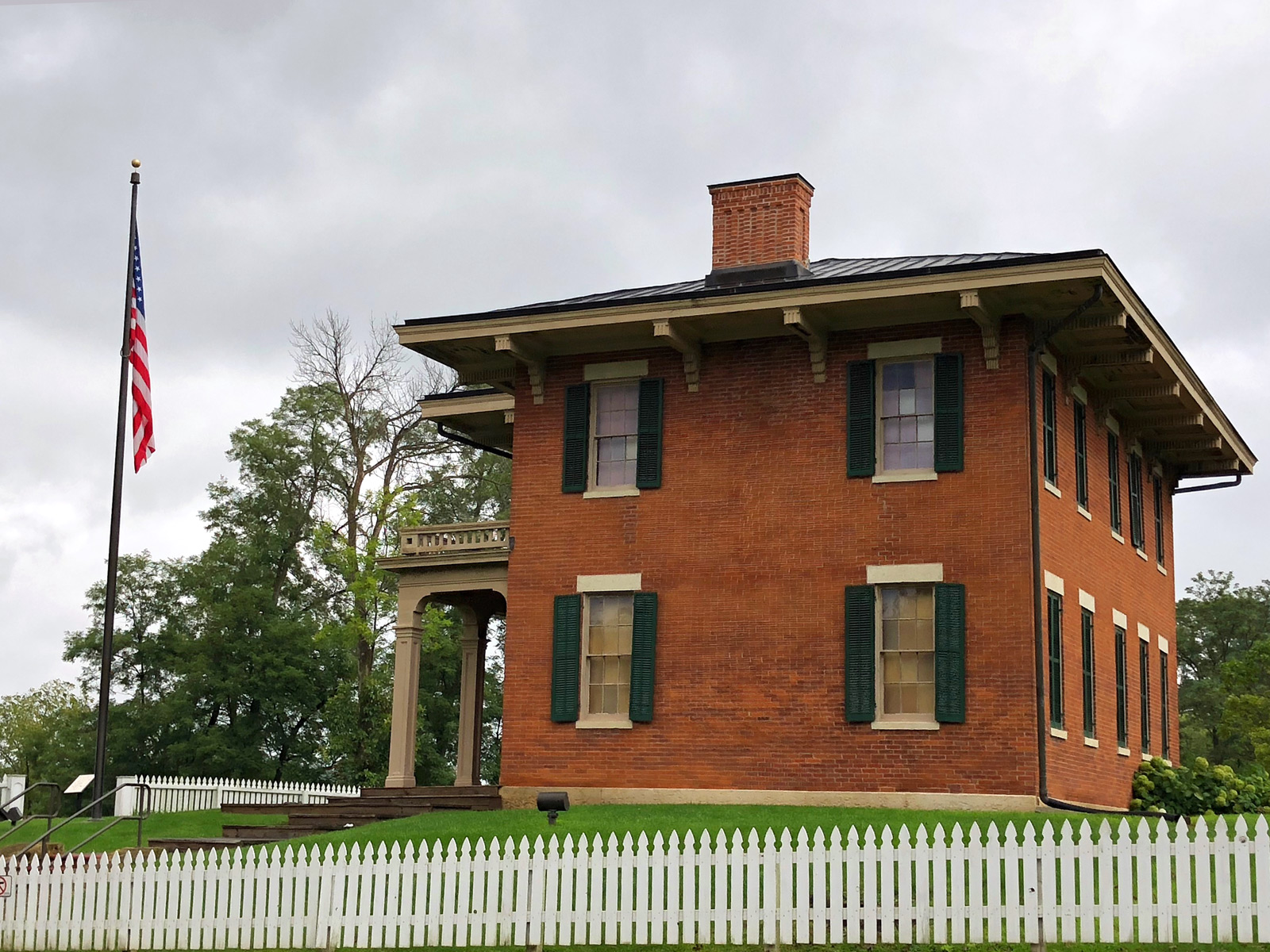 Galena is also home to the oldest operating hotel in Illinois (the Desoto) and some say it has the oldest continuously operating post office in the country.

Expect to do a lot of walking in Galena, because the town is built into a bluff. There are sloping streets worthy of San Francisco and seemingly endless staircases conjuring Montmartre.

But some of the spirit of Galena lies beyond the quaint downtown.

Blaum Brothers distillery, for example, sits barely a mile and a half east of Main Street on busy Highway 20.

Here, in a colonial-style former retail building, brothers Mike and Matt Blaum have been distilling and bottling spirits since the end of 2013. 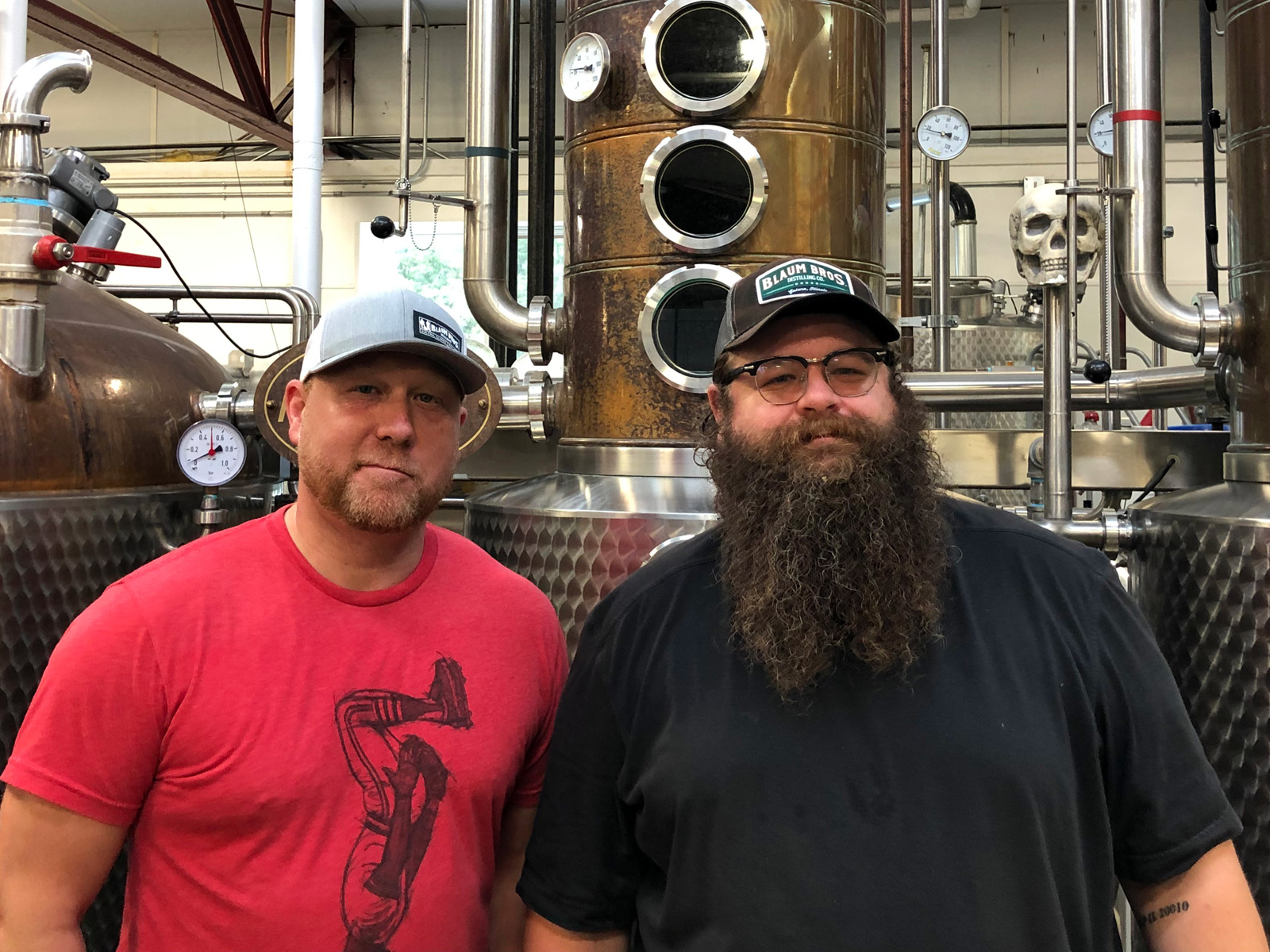 "We don't really have any elaborate back story about how our great-grandfather was distilling in the bathroom," says Mike ... the bearded one. "There's increased competition over the past several years, and you know everyone's looking for their little angle."

The brothers put this same disclaimer on their bottles, but don’t believe it. They do have a story. 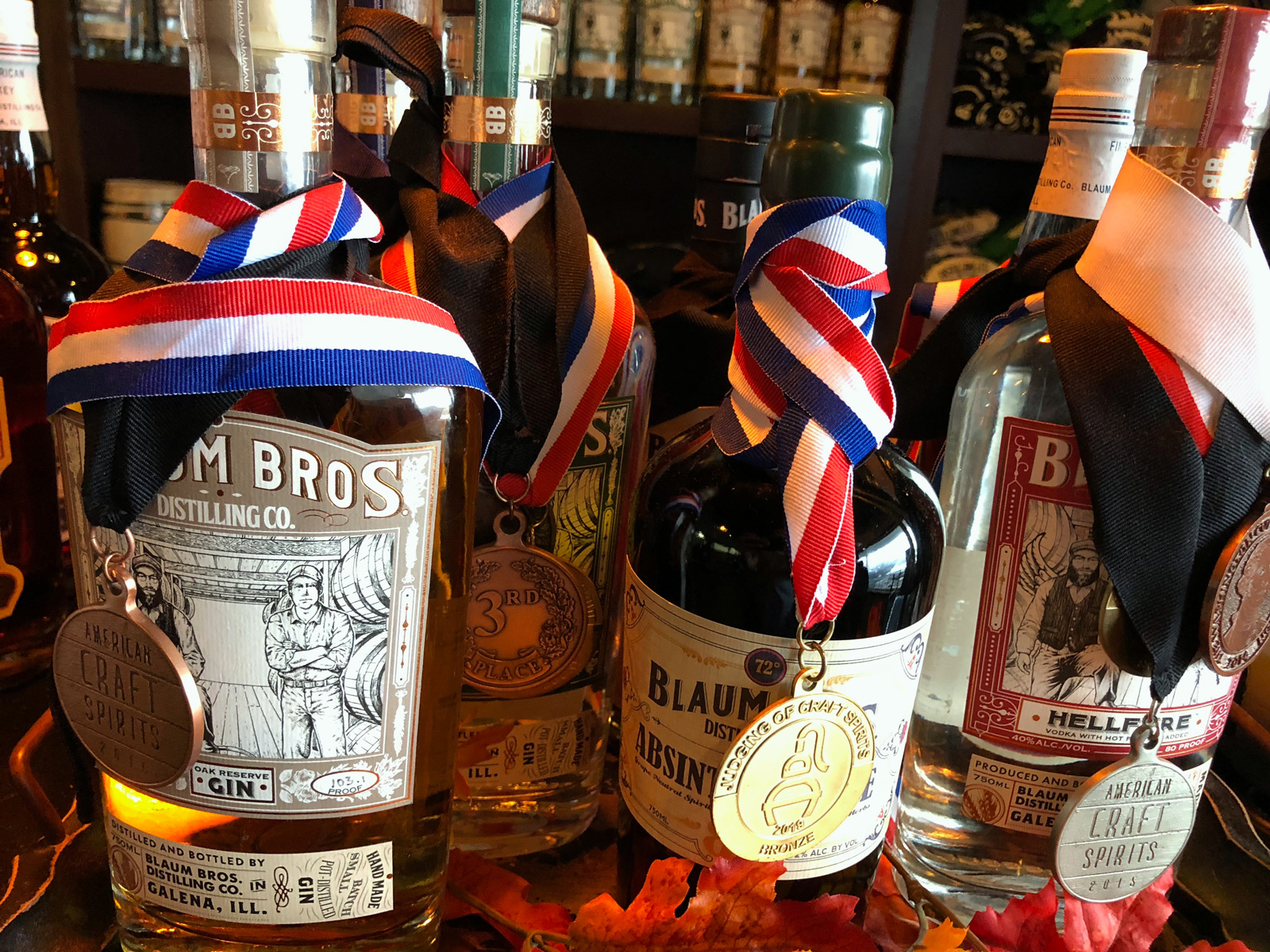 Mike worked overseas for the National Security Agency and Matt ran a nuclear medicine business in Chicago. Tossing aside these successful careers, the brothers moved to small-town Galena and sank their savings into a distillery.

That ain’t a half-bad backstory.

"But it doesn't make the product any better," says Mike. "We're more focused on what's in the bottle."

What’s in the bottles are vodka, one of the smoothest gins you’ll ever taste – plus a barrel-aged version – absinthe, rum, apple brandy and, not least of all, whiskey.

And, the brothers have struck gold. 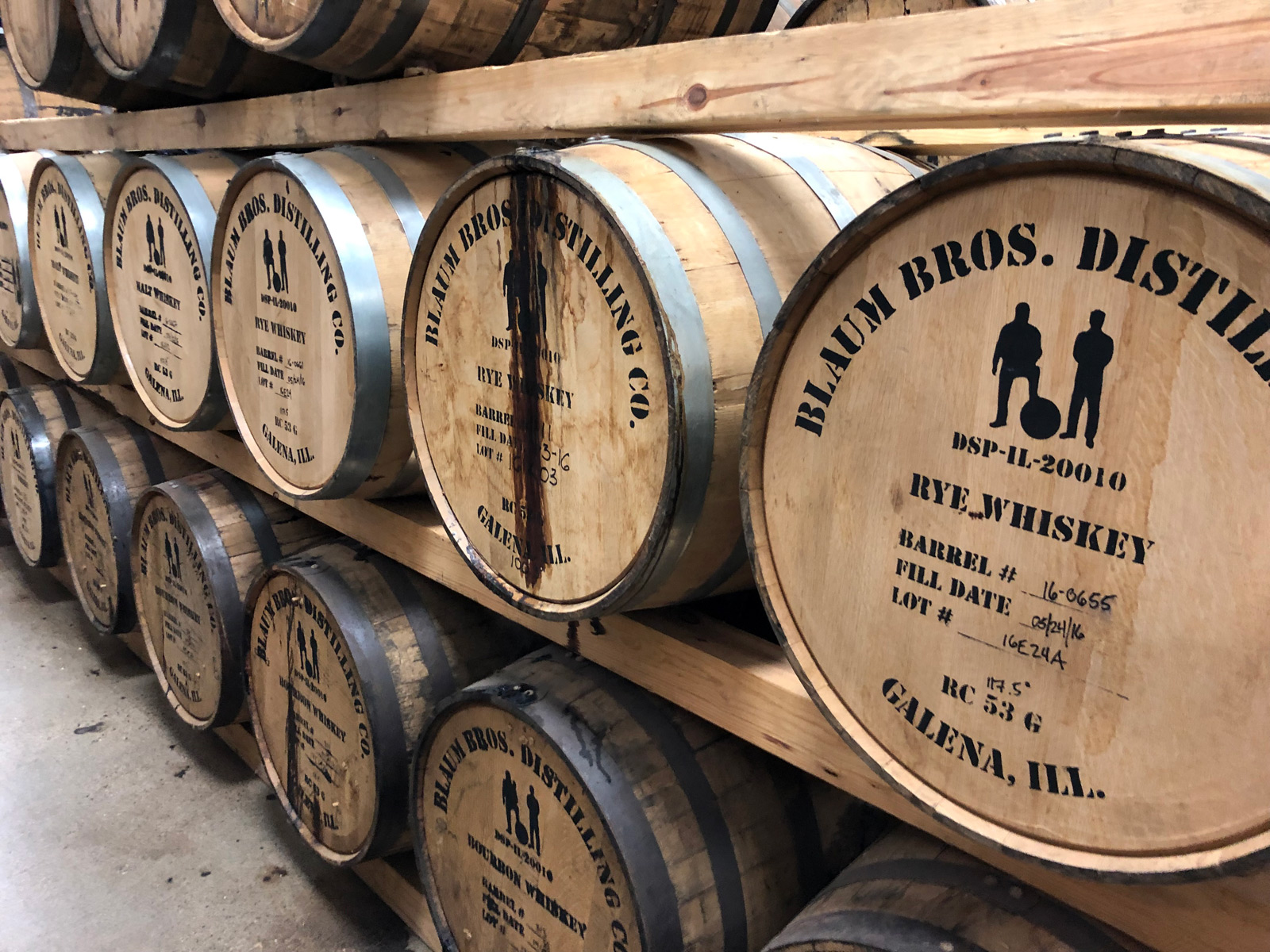 Their products – which bear labels that pay tribute to the long-dead post-Repeal Galena Distilling Company’s labels – are available in Illinois, Florida, Wisconsin, Colorado and a few other states, and there’s been interest from still more.

A sufficient inventory of stock is all that’s kept Blaum Bros. from expanding even further, though a new barrel house down the road will help build capacity.

In the meantime, the brothers and their families have embraced Galena.

"Galena is a nice small town," says Mike. "We both have experienced living in or near a big city and became kind of disenchanted. Being able to live in a small town that has so much tourism has been perfect. It's a good place to raise kids, and we both live here in town and are fully ingrained in the community."

A look at the back bars in taverns and restaurants and on the shelves of retail stores suggests that Galena has thrown its arms around the Blaum brothers, too.

"Yeah," says Mike, "which is tough (to achieve). Galena is a small town and a lot of people say, when you're coming here, 'it's going to be tough.' Because if you're not born in Galena or you don't have a family lineage in Galena, you're always considered an outsider.

Slobo and Birgit Radin are also newcomers who have also found the spirit of Galena, a little farther afield, about 7 miles out of town, just above the left bank of Big Muddy.

German natives who spent their careers working all around the globe in the hospitality industry, they were seeking something special for their retirement. 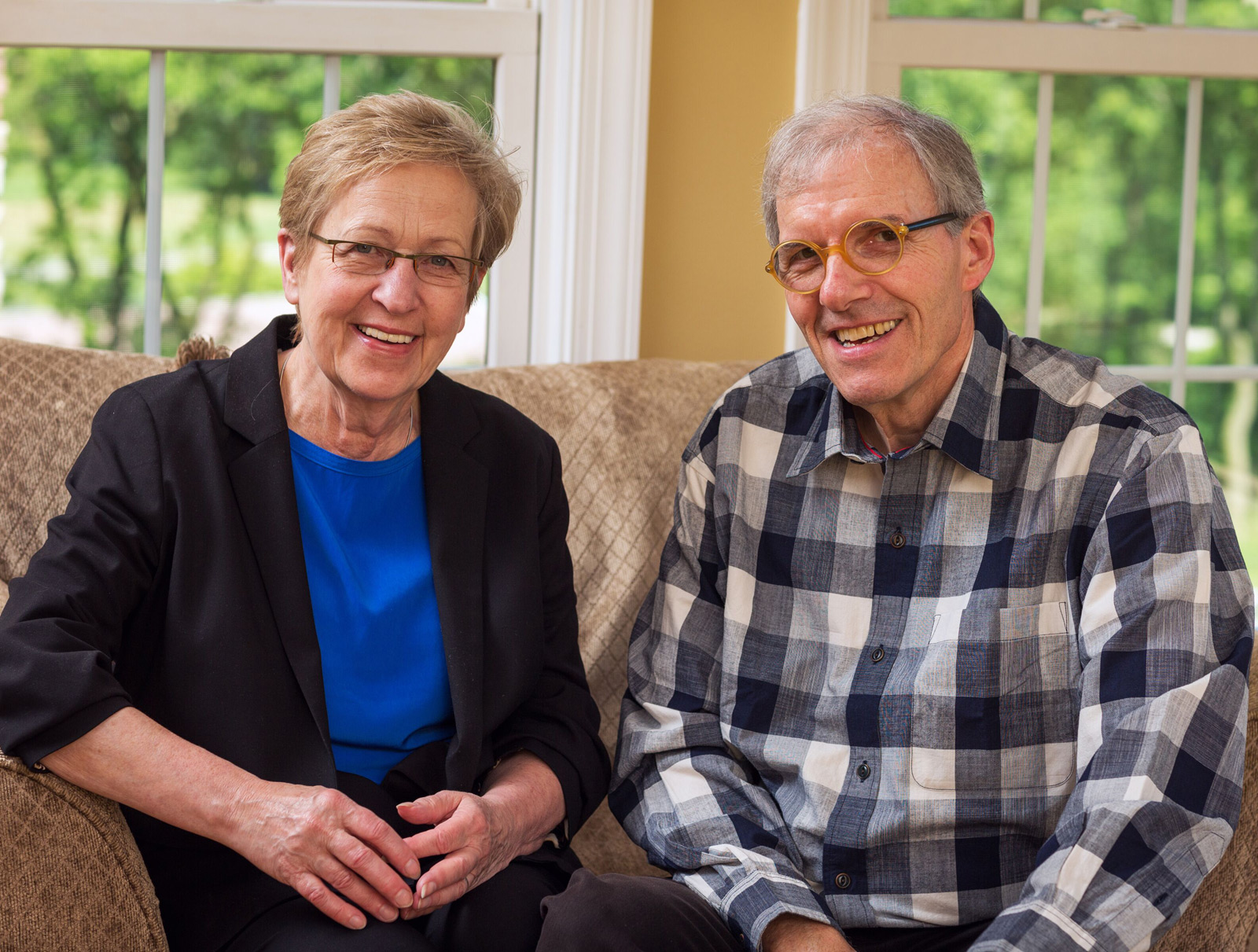 Having worked throughout Europe and the United States and even doing a stint in South Africa, the couple chose Galena, where they operate the Goldmoor Inn, which they bought about five years ago, in a recreated turreted chateau off a peaceful country road.

The 18-room inn – 13 suites, three cottages and two log cabins – offers a commanding view of the Mississippi River below. There’s also a spa on site, as well as gazebos and a covered outdoor space for weddings and other events.

Their few neighbors are horse farms. All day long, there’s little to be heard beyond the sound of birds and, at night, little to see beyond a black sky dappled with a million stars. 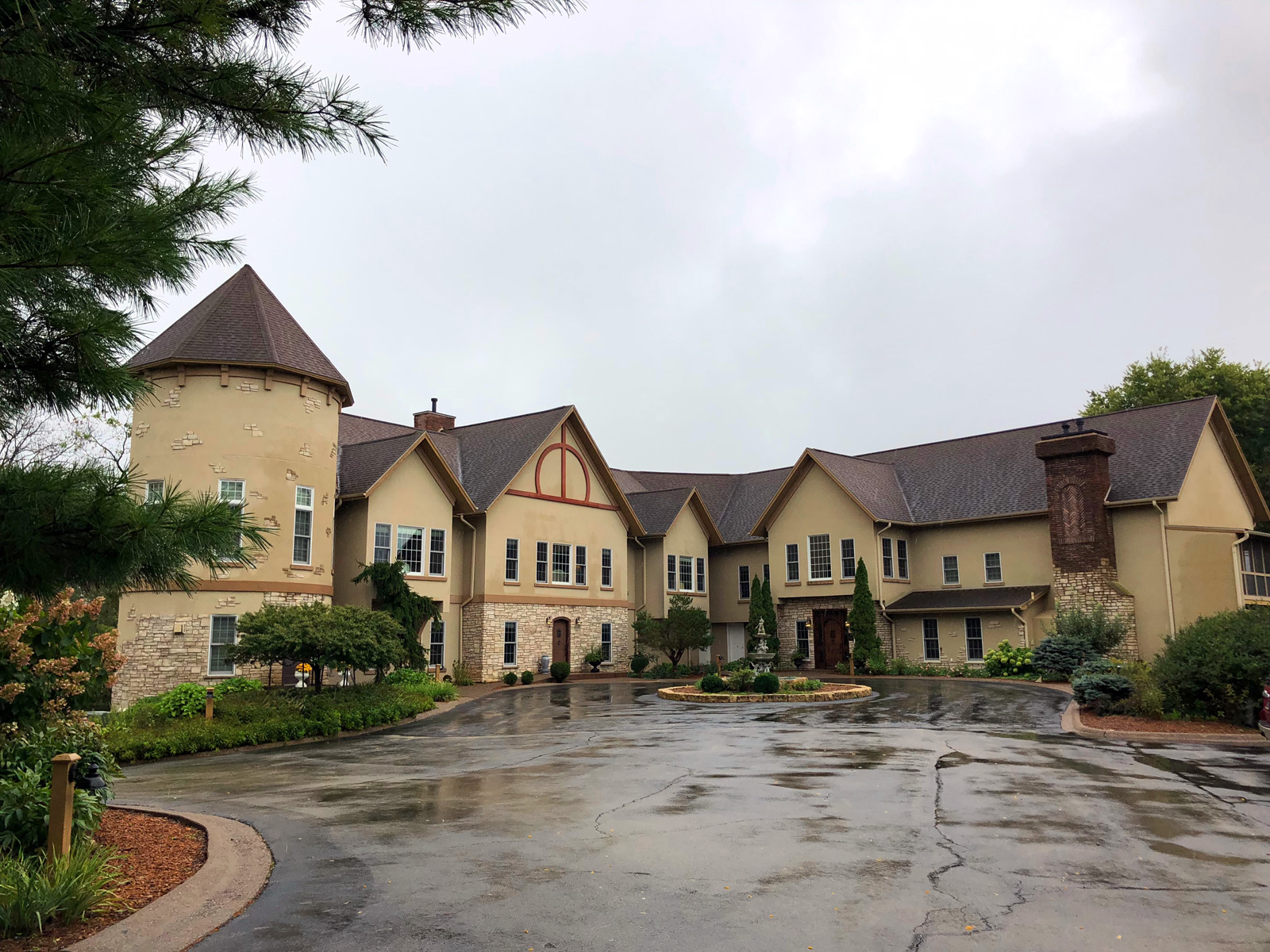 "The business has been around for about 38 years," says the genial Slobo as we tour the inn. "It started out in an A-frame four-bedroom private home. We restored the entire property from the outside to the inside."

The castle-ish wing – with its soaring atrium with comfy seating around an impressive stone fireplace – was added about 12 years ago, says Radin. A few years later an exterior porch was enclosed to become the dining room, where guests are served a gourmet breakfast each morning and which opens to the public as a fine-dining restaurant in the evenings. 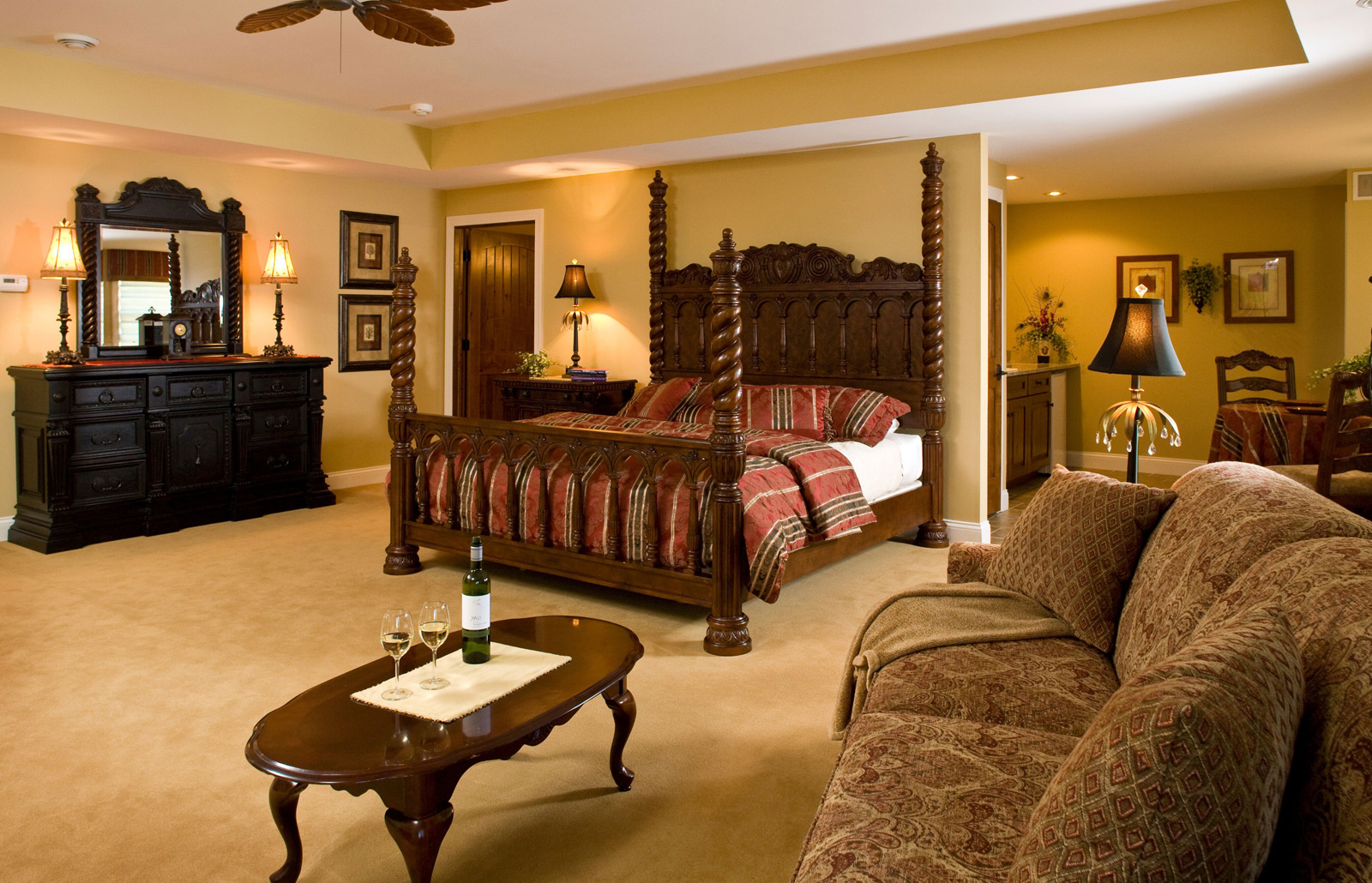 The suites are all between about 750 and 850 square feet and have in-room Jacuzzi tubs, fireplaces, king-size beds, kitchenettes and those river views.

"We were traveling the country for two and a half years to find a place," says Radin. "Even though we lived in Chicago three times, we didn't know anything about Galena. But Galena is such a major component in the history of the United States. This was the frontier of the United States at one time, and this small sliver of land produced eight five-star generals and one President of the United States, which is significant. Today the whole community lives off (Grant’s) name."

The Goldmoor Inn, however, seems to be living more off Mother Nature’s name.

As we talk, Radin points out an eagle soaring above. At breakfast, a couple of birdwatchers at the next tablerecounts the wide variety of feathered friends they’ve encountered.

Taking a walk, I count 11 horses grazing in a pen just below the inn. Later, Radin tells me there are a total of 37 between two horse farms there.

Though the weekend was drenched in torrential rain – it was the day before the official arrival of autumn in the gorgeously hilly driftless region where Galena is situated – I spied a quartet of Adirondack chairs positioned for maximum enjoyment of sunsets over the Mississippi.

In the morning, Slobo comes out of the kitchen wearing an apron and stops to talk to each table of inn guests at breakfast. Chatting with the birdwatchers, he says, "when you live in the city, your ears turn off." 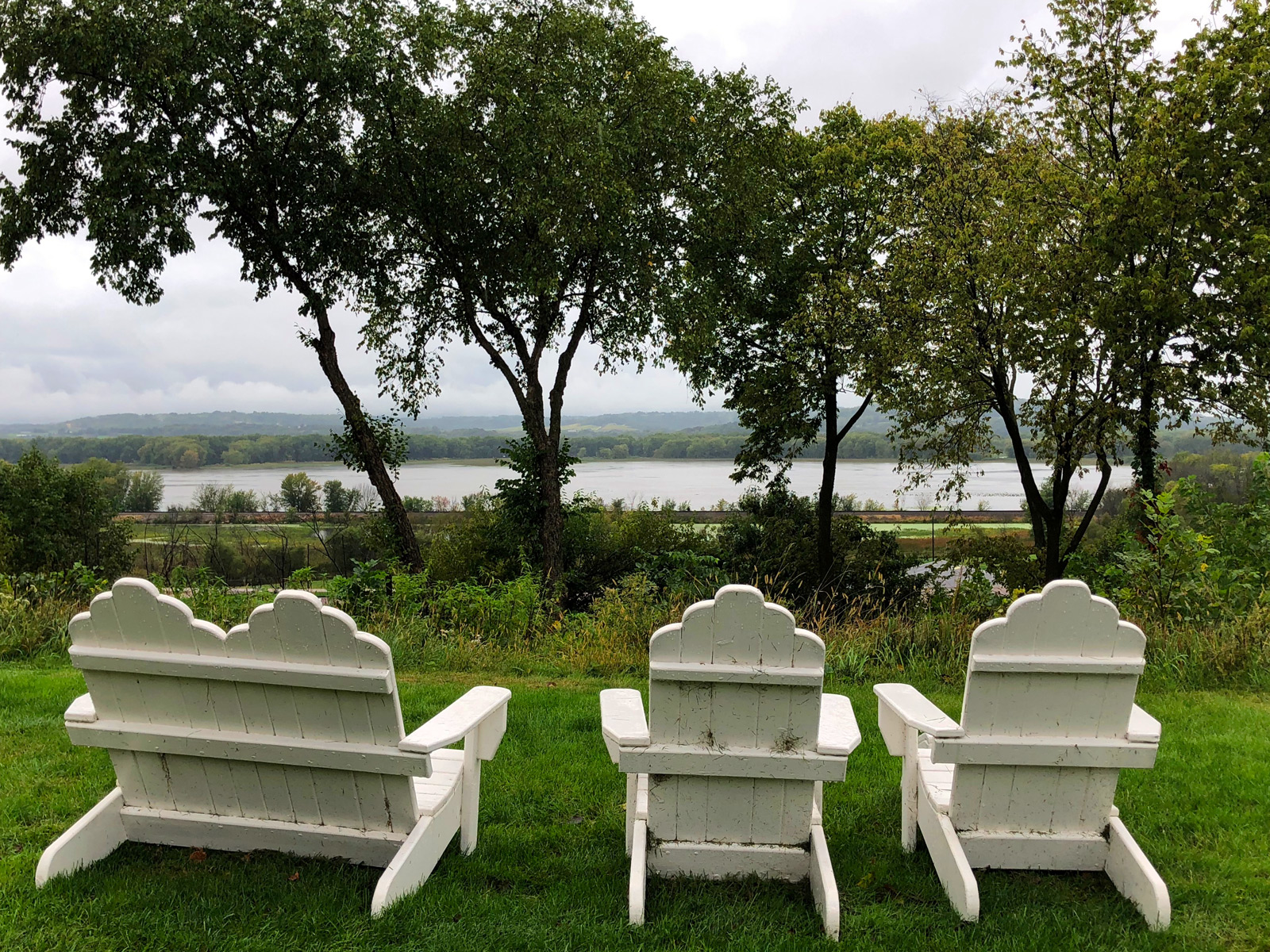 Your ears need some time at a place like the Goldmoor to reawaken to the subtler sounds of nature; the ones we can’t hear anymore thanks to jackhammers and car horns.

"We really found something very special here, and we fell in love with the Galena area because you have the mighty Mississippi here," he tells me as we tour. "You have the only mountains in Illinois, which are here, and then you have the forest around us, and you have the farms and the ranches.

"How many places have all the components in one place? The ecosystem is completely intact. There is no pollution up here. Nobody else can claim it but we can because we are in the midst of it."