Get hungry, Milwaukee: We've got a peek at Glass + Griddle's inaugural menu

Glass + Griddle is part of a new wave of brewery restaurants cropping up across the country where the same level of thought is put into the quality of their food as the flavor of their beers.

Last week, we gave you a peek at the impressive interior of Glass + Griddle, the new beer hall and restaurant located within Venue 42, the new mixed use development at 1130 N. 9th St.

G+G is part of a new wave of brewery restaurants cropping up across the country where the same level of thought is put into the quality of their food as the flavor of their beers. Among them are spots like Surly Brewing Co. in Minneapolis, Minnesota; La Cabra Brewing in Berwyn, Pennsylvania; Stone Brewing’s World Bistro & Gardens in Escondido, California; and even more upscale spots like the Michelin starred Band of Bohemia in Chicago.

G+G is keeping things pretty real. The menu features a nice selection of familiar, beer-friendly foods that won't intimidate casual diners. However, even the slightly condensed opening menu – which will be offered during the grand opening – showcases a unique blend of globally inspired flavors and culinary styles while serving the needs of vegan, vegetarian and gluten-free diners.

That’s thanks to the creativity and talents of Executive Chef Kyle Toner, formerly of Wolf Peach and Chef de Cuisine Daniel Pope, a former Wolf Peach alum who also worked at a variety of Milwaukee venues, including AP Bar & Kitchen.

"I really looked for items that had broad appeal and that incorporated all the tropes of a brewery menu," notes Toner. "But I’m presenting them in a way that’s different from everyone else."

Beer halls are made for snacking, and your list of options at G+G is satisfying.

True nibbles include beer cheese spread made with Louie’s Demise and served up with pickled onions and saltines ($5), crispy pork rinds with brewers yeast and malt vinegar ($5) and Brewery Granola, a sweet and savory snack featuring spent grain, seeds, nuts and dried cranberries sweetened with the help of a wort syrup ($3). 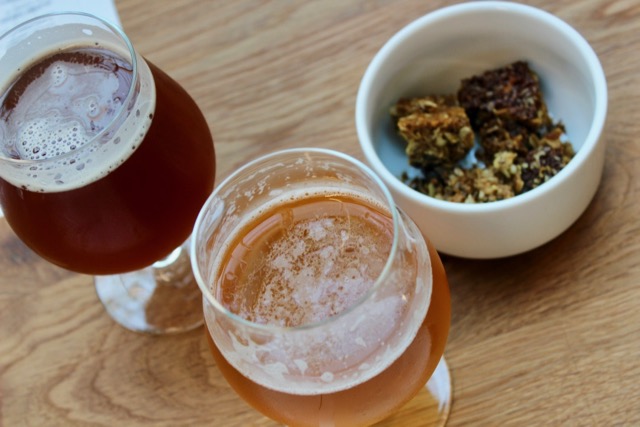 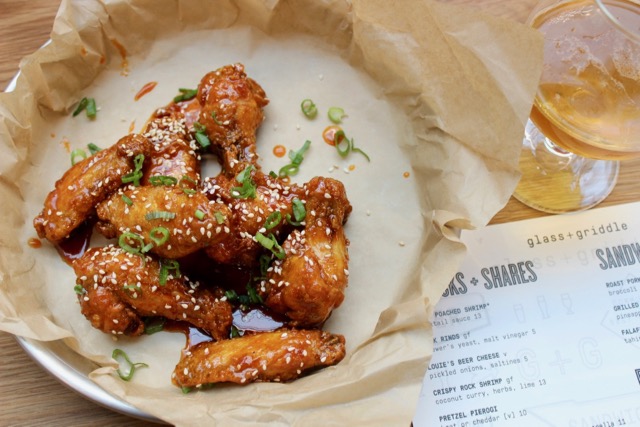 There are also gluten-free jalapeno poppers, bite sized slices of jalapeno stuffed with cream cheese, breaded and fried until crisp. They’re served with salsa verde for dipping ($10). Meanwhile, pretzel pierogi are filled with either bratwurst or cheddar cheese, seared and served up hot with a side of mustard ($10). 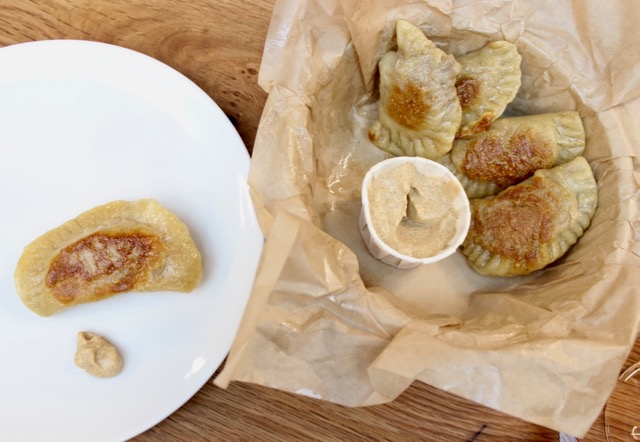 Additional options include beer poached shrimp served with cocktail sauce ($13), crispy rock shrimp served up in a coconut curry with herbs and lime ($13) or sticky ribs prepared with jalapeno grape jelly and peanuts ($12).

Vegetable portions at G+G are generously portioned so they can easily be consumed as a main course or shared among multiple diners. Options include seared broccoli with Caesar dressing and breadcrumbs ($10) and sweet, earthy roasted beets served with mixed greens, creamy avocado, citrus and pistachios ($10). 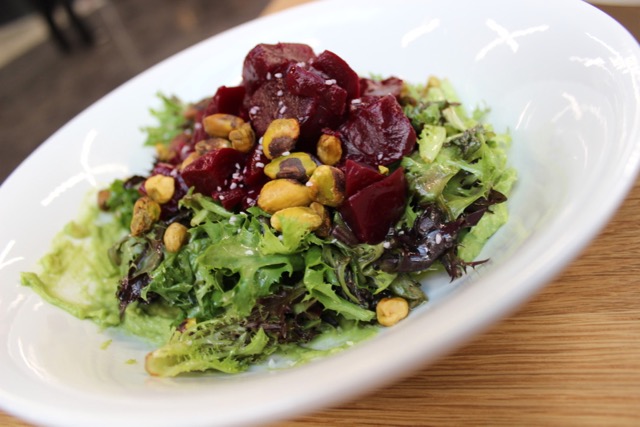 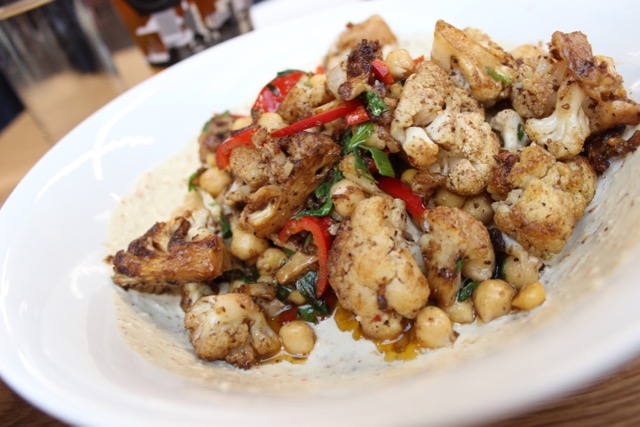 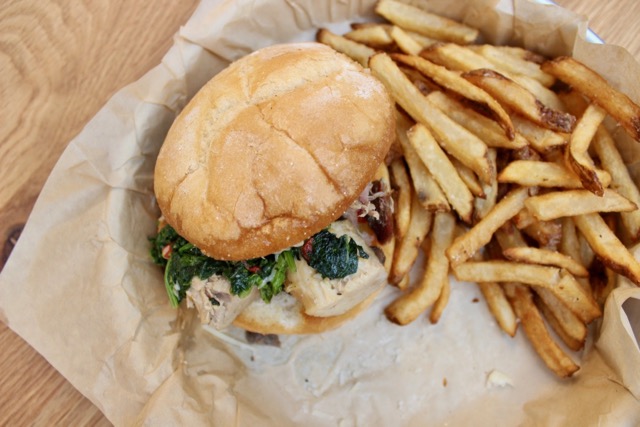 Meanwhile, burgers come three ways: a simple double burger with American cheese for $9; a slightly fancier half-pound burger with beer cheese, onions and sundried tomato ketchup ($12); or in the form of a lamb merguez burger served with feta, cucumber and a fried egg ($13). Add fries or house salad to any sandwich for an additional $2.

Nothing at G+G is overly composed, but you’ll also find a variety of comforting globally-inspired entrees on the menu. Those include a half chicken seasoned with piri piri and served with French fries for $21. There’s also Strauss hangar steak served up with an aged chimichurri sauce and a side of fries for $28. 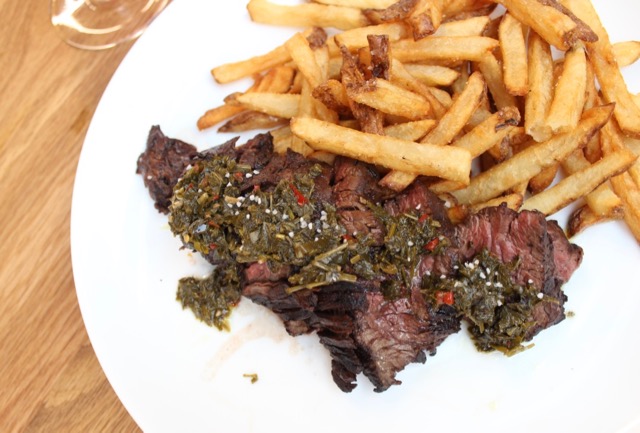 Vegetarians and meat-eaters alike will enjoy the seared lasagna, which features layers of pasta, ricotta and fresh spinach bathed in a flavorful Italian marinara ($18). 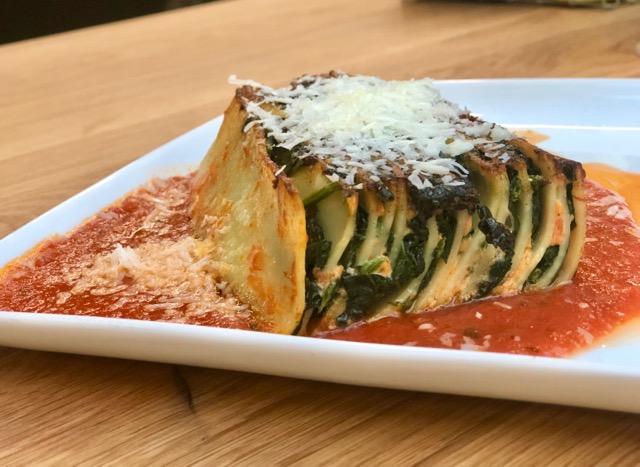 G+G’s current dessert menu is short and sweet. It features two items: a modern take on traditional Southern style banana pudding with caramelized bananas and vanilla wafers for $8 and a warm basket of three full-sized doughnuts (currently cinnamon brown sugar) for $5. You really can’t go wrong with either. 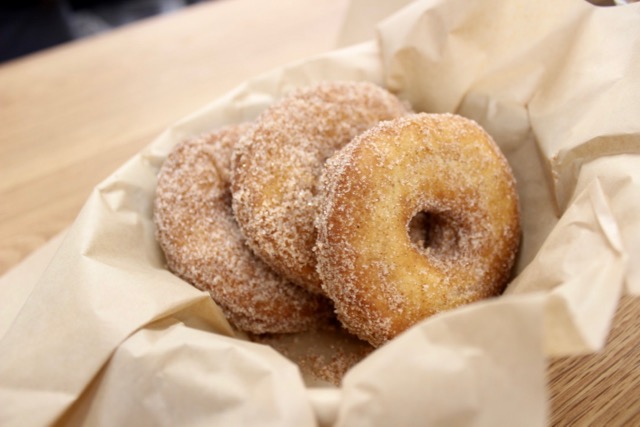 Get your first taste of G+G

Although Glass + Griddle officially opens on Sept. 6, you can get a first taste during Venue 42’s special beer garden concert series, which takes place Aug. 29 through Sept. 2. During the festivities, Glass + Griddle will open at noon, serving food until 9 p.m. and beverages until 1 a.m., and the brewery will be open for beers at the taproom bar and tours of the new space. Meanwhile, throughout the day, local artists will perform at the complex each day from 1 until 10 p.m. (Read more here.)

Beginning Sept. 6, Glass + Griddle will be open daily from 11 a.m. to 10 p.m. Happy hour will take place Monday through Friday from 4 to 6 p.m. and a special late night menu will be available between 10 p.m. and midnight. The venue will also offer shuttles to games at the Fiserv Forum during basketball season.