Staying in Madison? The Graduate Hotel offers both comfort and nostalgia

Always wish you could go back to college? A new Madison hotel can at least help out on the nostalgia front.

MADISON – Always wish you could go back to college? A new Madison hotel can at least help out on the nostalgia front.

The Graduate, a 72-room midscale hotel located at 601 Langdon St. in Madison, is one of five university-themed hotel properties launched by AJ Capital Partners (including locations in Arizona, Georgia, Mississippi and Virginia).

Located in the former home of the Dahlmann Campus Inn, the hotel is cozy and charming -- sporting a bright comfortable lobby where wooden canoes hang from the ceiling and hallway carpeting resembles an aerial view of the State Capitol.

Room keys themed after characters from the 1986 Rodney Dangerfield comedy "Back to School," a movie which was filmed in part on the UW-Madison campus. 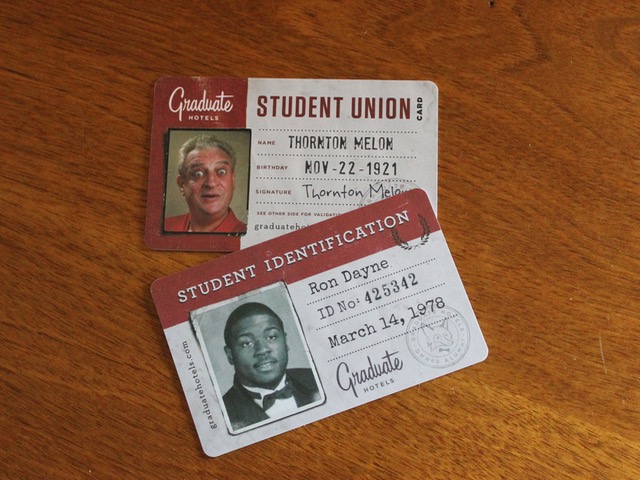 The Graduate is two blocks from the Memorial Union and a short block from State Street. In other words, it is right in the middle of where you want to be for a visit to the University of Wisconsin. It’s also less than a mile from the State Capitol, Madison Museum of Contemporary Art, and other attractions.

Rooms at The Graduate are likely give you flashbacks to the days of grand old dorm living. Ours was compact but functional, featuring a very comfortable triple-sheeted queen bed, a functional desk and corner window views of the UW campus and the surrounding residential area. 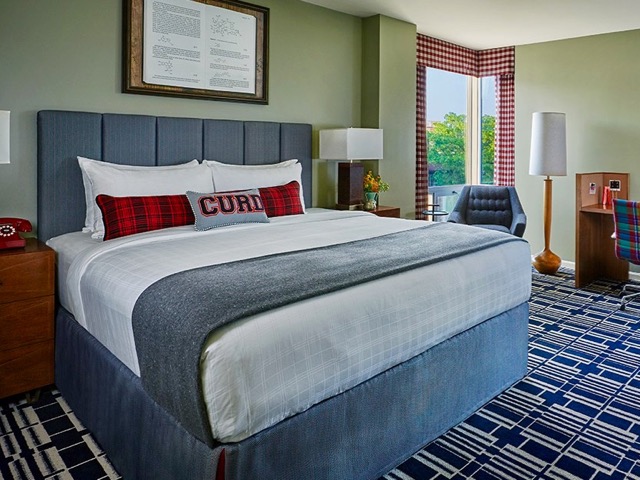 Proximity to campus means a couple of things:

Decor offered nods to both Wisconsin and UW-Madison.  And, as is customary in every room, ours contained an ink drawing of "Scanner" Dan Mathison, a recognizable fringe character who can often be spotted in person along State Street or at the Memorial Union.

Mine was compact and neat, with a standing-only, glassed-in shower and fun wall-paper doppled with cartoony college-esque characters. Towels were stacked below the sink in locker room style baskets, while extra toilet paper and soap were packed into clever linen bags. Stocked with great smelling Malin+Goetz bath products (which are marketed for sensitive skin), the compact space hit the note right between functional and whimsical. 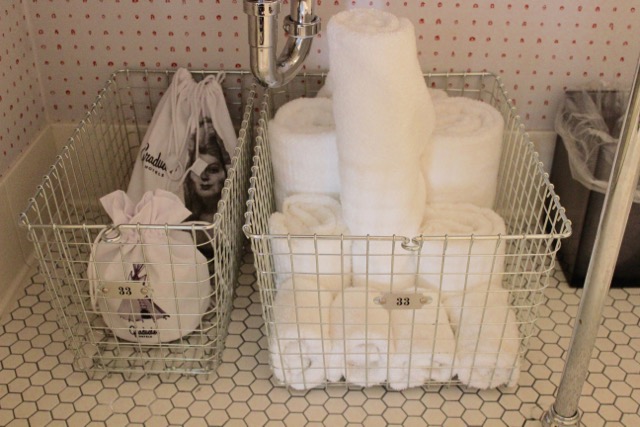 The Graduate offers free underground parking to guests, along with complimentary wi-fi, HD TV and an iPod docking station. Mini fridges and coffee makers are standard in every room. Meanwhile, a fitness center adjacent to the lobby provides guests with the opportunity to work out 24 hours a day.

Local recommendations and concierge services can be obtained at the front desk. Guests can also grab a complimentary bicycle to explore the city during their stay.  Pet-friendly rooms are available. 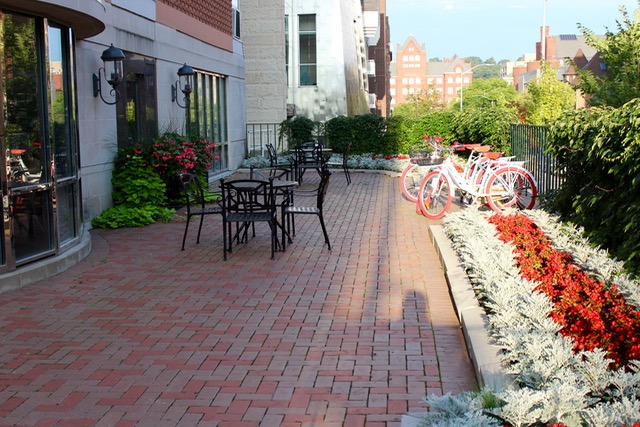 Guests have two choices when it comes to dining at The Graduate. Off the lobby is Portage Pi, a restaurant serving up grab and go items along with panini, salads, coffee, smoothies and (tasty) signature hand pies in both sweet and savory flavors including the Wisconsin with eggs, cheese curds, ham and herbs ($6) and the banana s’more with bananas, chocolate and marshmallows ($5). 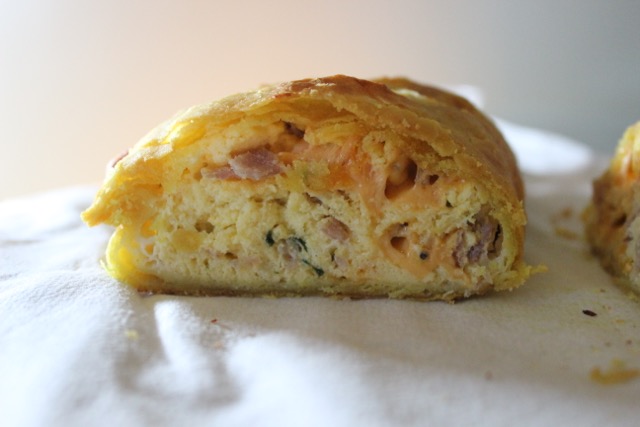 A 20-foot communal table holds banks of outlets to power laptops, phones and tablets, making it the perfect spot to grab a bite and get some work done at the same time. 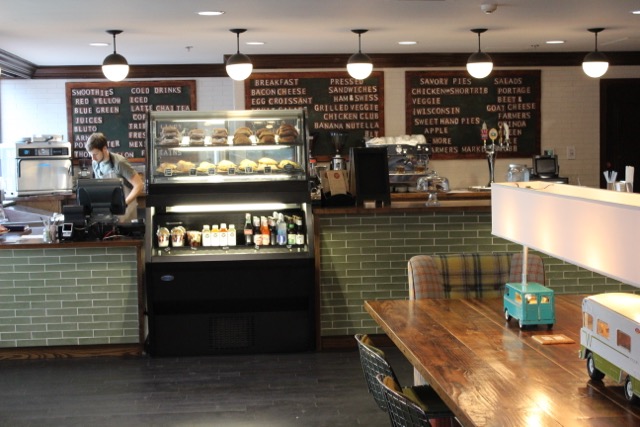 More formal dining can be found at the rooftop bar and restaurant, Madison Blind, which opened in late August.

The patio sports views of Lake Mendota and the Capitol, so it’s the perfect spot to settle with a cocktail at the end of a long day.

Both small and large plates, created by Chef Chris Cubberley, include Wisconsin-inspired specialties like elk poutine and venison meatballs, along with hummus, salads, steak tacos and other entrees can offer up anything from a snack to a more involved meal. 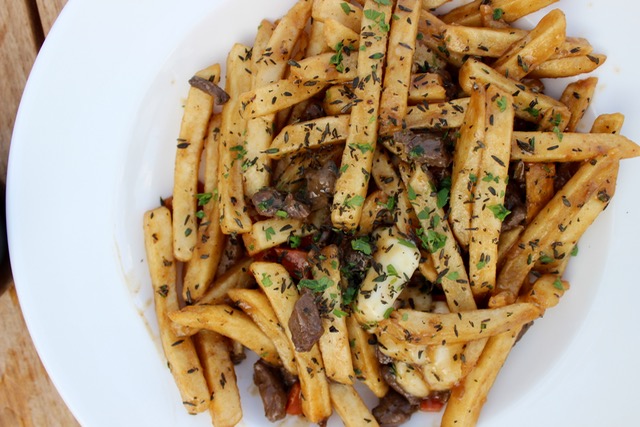 The Graduate is competitively priced with rates starting at $180 for rooms with one double bed. Queen and king options are available for just under $200, with suites ranging from $209 to $254.

This conveniently-located Madison hotel is great for UW alums, families of students at UW-Madison or anyone who wants to stay downtown close to the action. Alumni will get a particular kick out of the sometimes over-the-top branding and myriad "insider" jokes.