Tintype photography is a lost art form and an early phase of American photography that was introduced and practiced primarily in the 1860s and 70s. Because it was popularized during the Civil War era, many of the original tintypes are of battle scenes, military heroes, covered wagons and the "Wild West."

Recently, Eileen Blom and Margaret Muza decided to revive the process after reading an article about tintype photography. Neither of the women, who have been good friends for years, had a background in photography or chemistry – which might be considered prerequisites for successful tintype photos.

The women quickly learned there was practically no information available online or in libraries about the craft of tintype photography. Muza wrote an email to the man who wrote the article that originally sparked their interest, but he wrote back and said the article was published in 1972, he was no longer a tintyper and he was unwilling to help.

Refusing discouragement, Muza and Blom continued to search for tintype information and mentors. Finally, they located a woman in Brooklyn who agreed to teach them. The two flew out to Brooklyn last fall and spent numerous days learning the tedious – and toxic – process.

Tintype photos are developed on a thin sheet of metal – historically, sheets of iron (Muza and Blom use aluminum) – and require the use of highly dangerous and poisonous chemicals. Although the women have had a couple of chemical-exposure scares, they are well informed and regard safety as a top priority.

The women bought the necessary equipment to make tintype photos – primarily a large-format view camera, lights and chemicals – from Craig’s List and elsewhere on the internet. They had a film holder specially made to accept the kind of plates they wanted to use.

They started working in Muza’s basement where they learned a lot through trial-and-error.

"There were times I asked myself what we were doing," says Muza. "Times I thought maybe we shouldn't be doing this because we knew so little about it going in. But Eileen and I encouraged each other. And we kept getting better."

In very early 2016, the women moved their business – which they named Gun Cotton Tintype Photography – into studio space at 1911 S. Allis St., in Bay View. They started photographing individuals and bands and, eventually, they want to set up at weddings. Appointments can be made through the Facebook page or by calling (262) 442-5119.

Historically, tintype photographers worked in fairs and carnivals or as sidewalk photographers. In the same spirit, Gun Cotton will have a tintype photo booth at the Mama Tried motorcycle show, Feb. 19-20 in Walker’s Point. The process takes about 15 minutes, so people will be able to walk away with a 4-by-5 tintype photo.

The appeal of tintype photos is the antique photo appearance that comes from the uneven exposure and the color tone which is not quite black and white nor sepia tone. Basically, every tintype looks like it could have been shot a century or more ago.

Tintypes also last much longer – up to 150 years – than paper-printed photos and provide interesting and artistic imagery that can’t be reproduced through digital technology.

Today, tintypes are an artistic amalgam of novelty and nostalgia.

"We both love history and people, which is really what drew us to this," says Blom.

Here are six photos from our recent visit to the Gun Cotton studio. 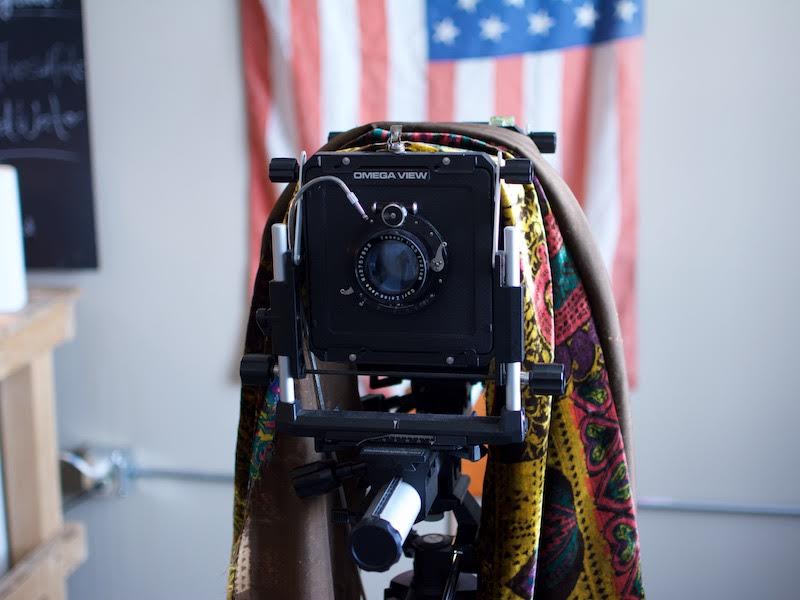 2. Blom and Muza (under the focusing cloth) in their studio 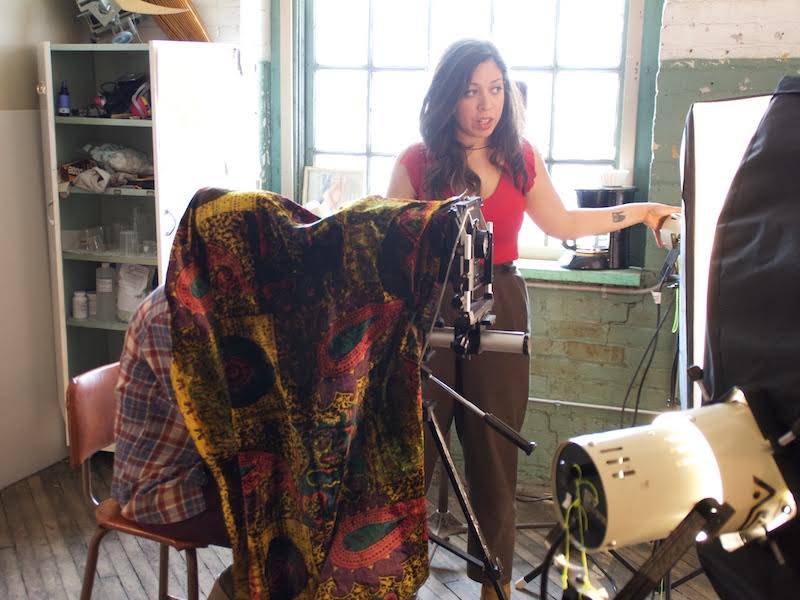 3. A tintype nearing the final process 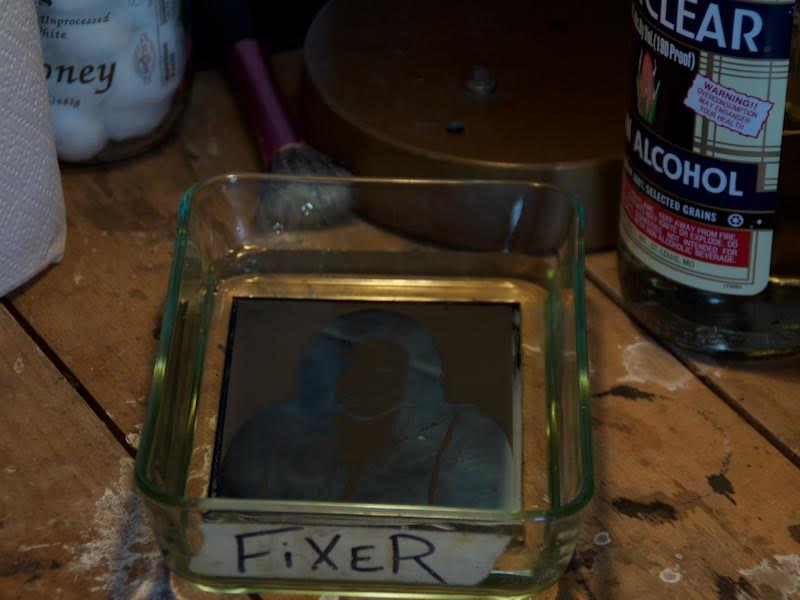 4. Some tools of the trade 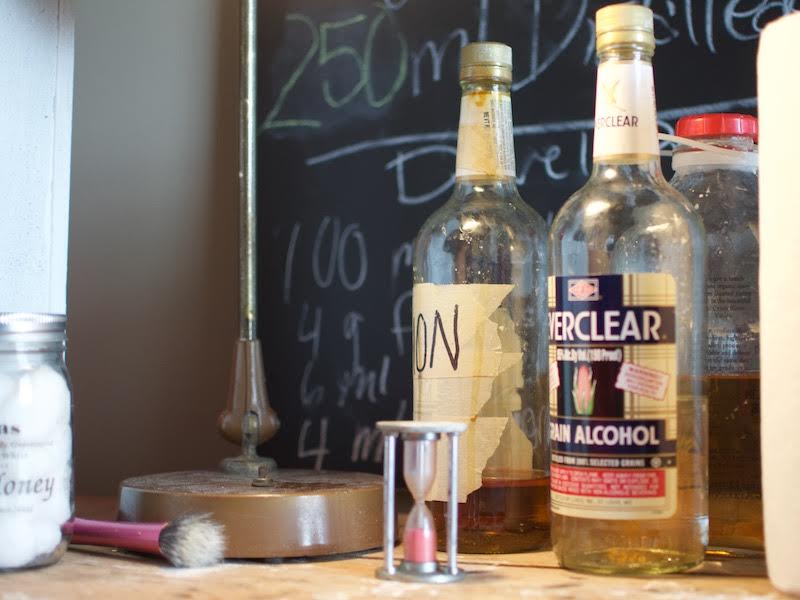 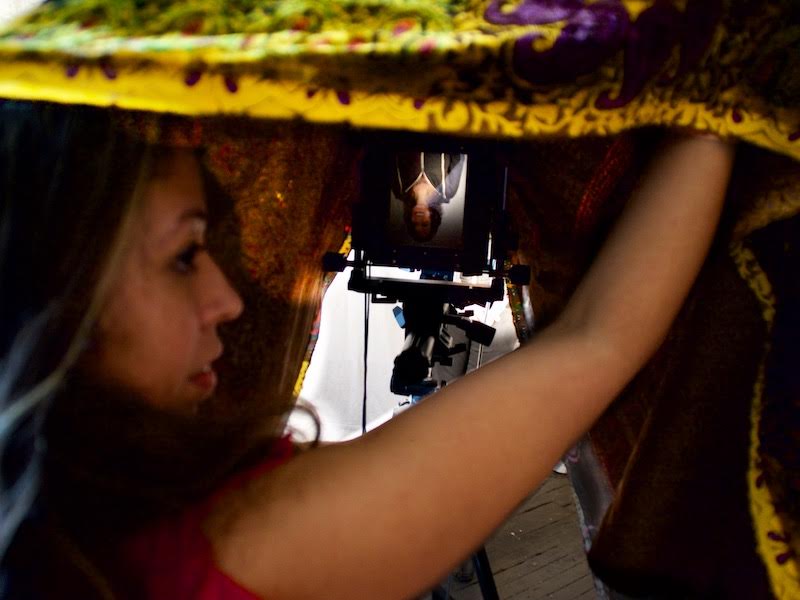 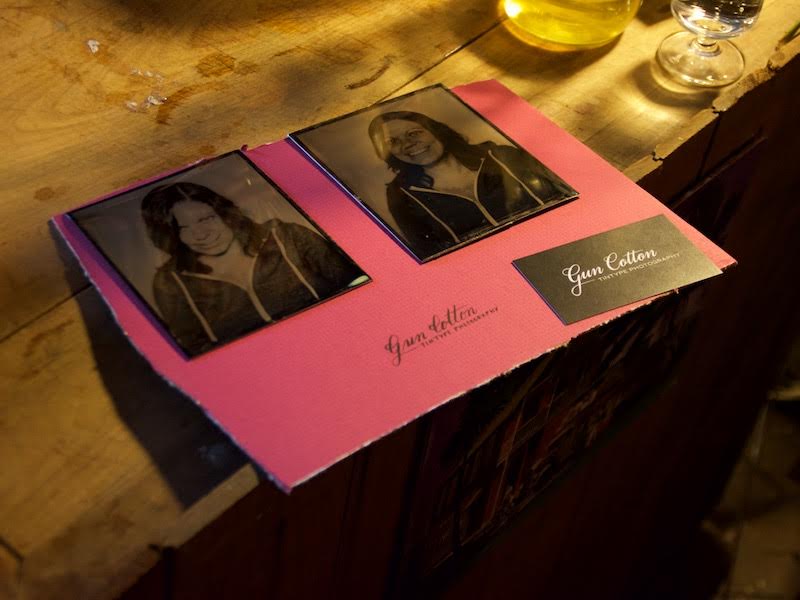