The BBC becomes the HBC: Slick design is at core of Hacienda Beer Co. Taproom

Located on the first floor of the former G. Daddy's BBC, the HBC is the first official tap room for the experimental beer project, an offshoot of Door County Brewing Company which operates out of a 15-barrel brewhouse in Bailey's Harbor, Wisconsin. Due to its size, the brewery has extremely limited distribution. So the new taproom marks an exciting step forward for both the brewery and the Milwaukee market.

Located on the first floor of the former G. Daddy’s BBC, the HBC is the first official tap room for the experimental beer project, an offshoot of Door County Brewing Company which operates out of a 15-barrel brewhouse in Bailey’s Harbor, Wisconsin. Due to limited production, Hacienda's brews are relatively scarce. So the new taproom marks an exciting step forward for both the brewery and the Milwaukee market.

In fact, thanks to the work of 360 Degrees in collaboration with Barthenheier Construction Co., the interior of the taproom incorporates the spirit of the boundary-pushing brand and its charming, eclectic brand aesthetic through a whimsical combination of blue, green and bright orange accents, a variety of wood finishes, unique wall coverings and vibrant furniture.

They were still putting finishing touches on the space when we dropped by, but you can definitely get a feel for the transformation. 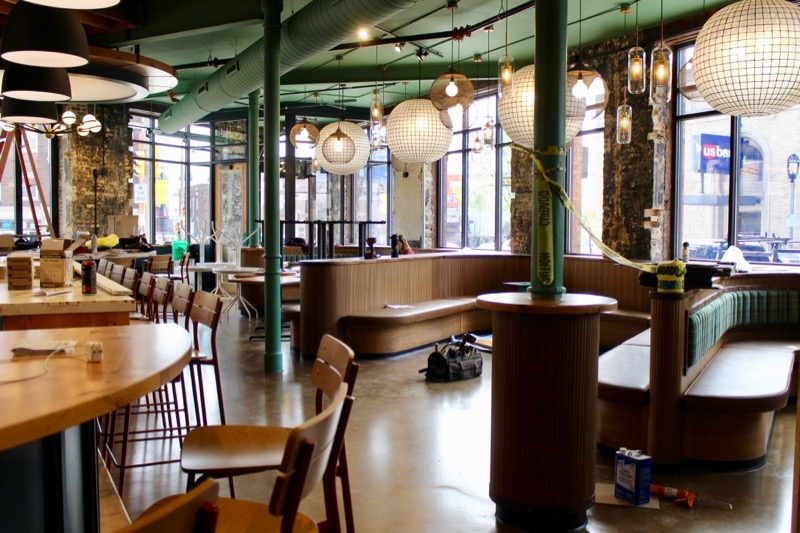 "Our design team went to great lengths to ensure the design concept properly communicates the clients’ brand and speaks intimately to the Hacienda Beer Co. story," says Brian Polster, co-founder of 360 Degrees. "Personally, I enjoy everything about this space. It’s going to be an active place and we built it so there’s plenty to discover in terms of visual elements."

Those familiar with the former BBC are likely to be impressed by the dramatic changes in the space, which has been transformed with light, color and a mixture of eclectic modern and mid-century modern inspired design.

Although the bar is located in the same place as it was in the BBC, its look has been reimagined. The new double-sided alder wood bar trails largely from the front of the space to the rear, its bold base striking a contrast against the vibrant orange and warm wood of accompanying bar stools. 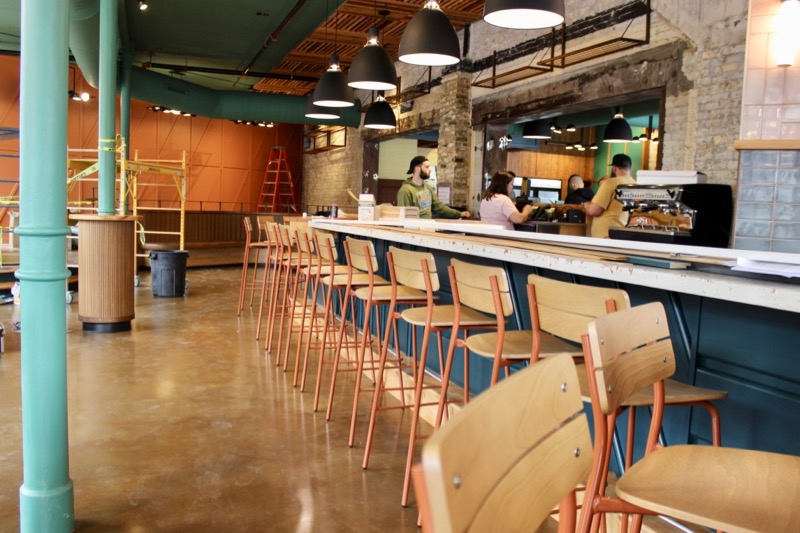 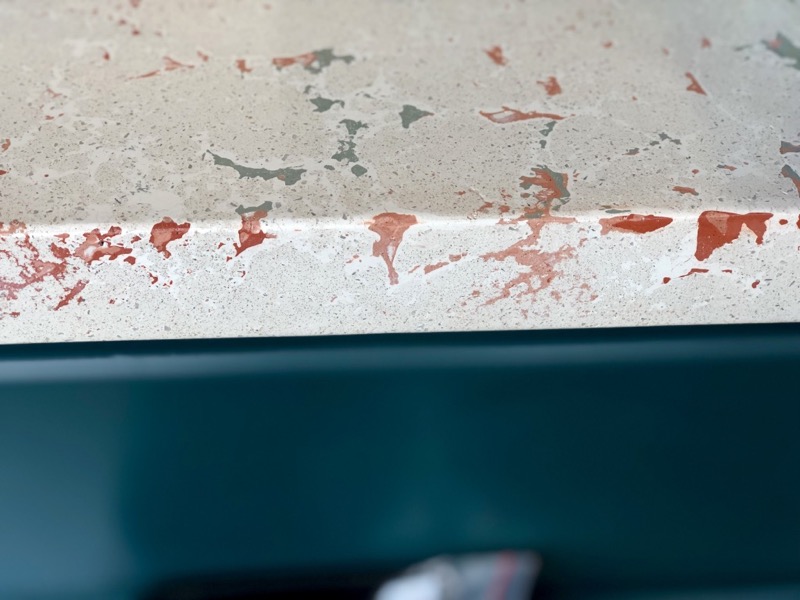 In the western half of the space rolling banquettes mimic the curves in the bar, sporting a combination of custom blue and green plaid upholstery and tambour wood accents. 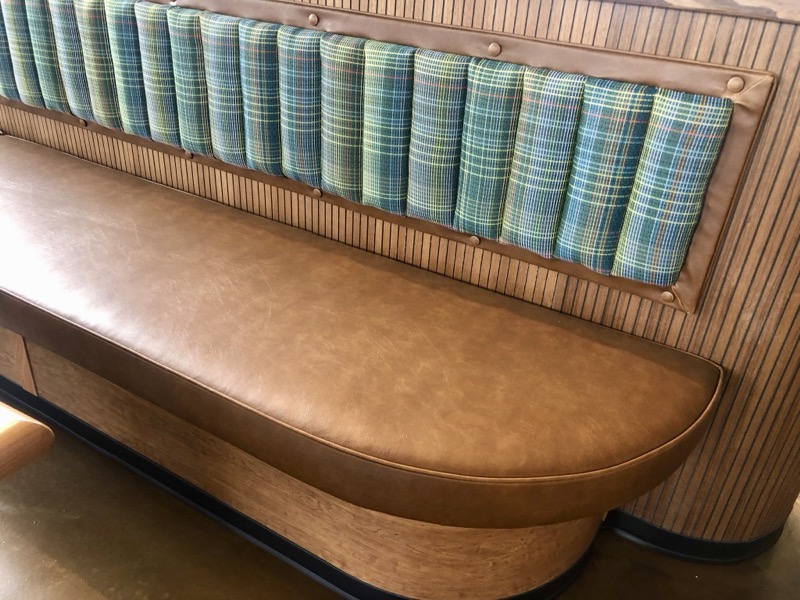 Meanwhile, an eclectic collection of lighting fixtures hang above the banquettes providing a feast of textural contrasts against the raw cream city brick walls, teal ceiling and dramatic windows encased by brick archways. 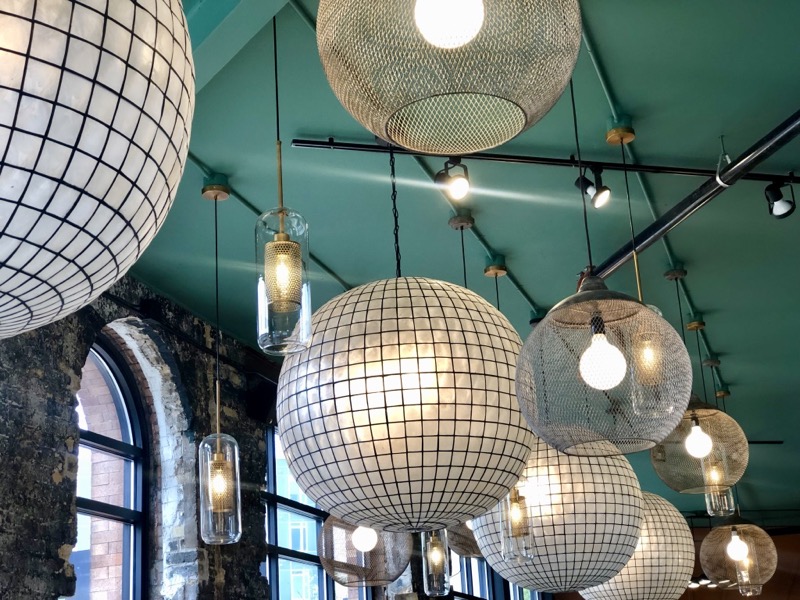 "We wanted to go bold on the fixtures," notes Polster. "When folks drive by at night, we don’t want them to miss it …"

And that’s unlikely to happen thanks to additional features like the accordion-style windows on the front of the building which will open out onto a custom-designed sidewalk patio complete with bench-style banquette seating made from cedar and powder-coated steel and built-in planters. 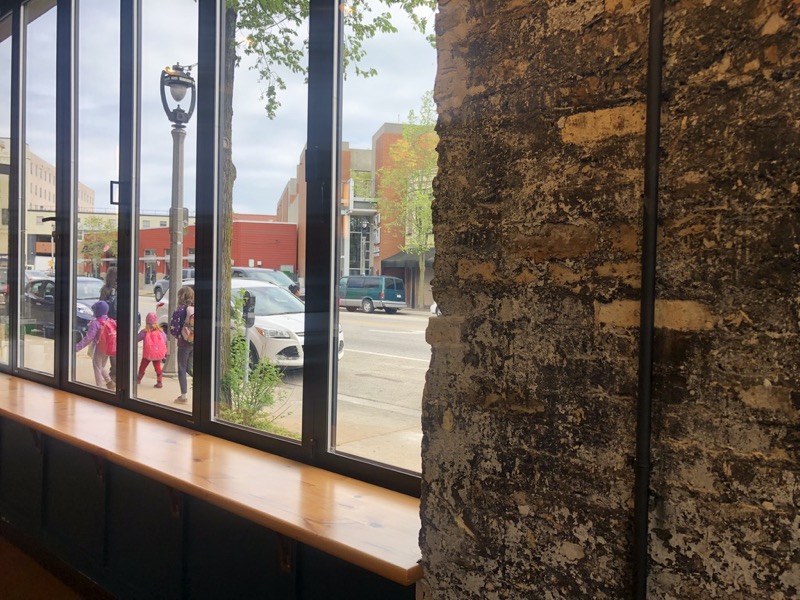 Head to the back of the taproom and you’ll find an elevated seating area framed out by a bright orange wall (complete with a hidden picture rail running through the middle) serves double duty as a stage, which can accommodate live performances, complete with a high tech sound system and roll-down screen. 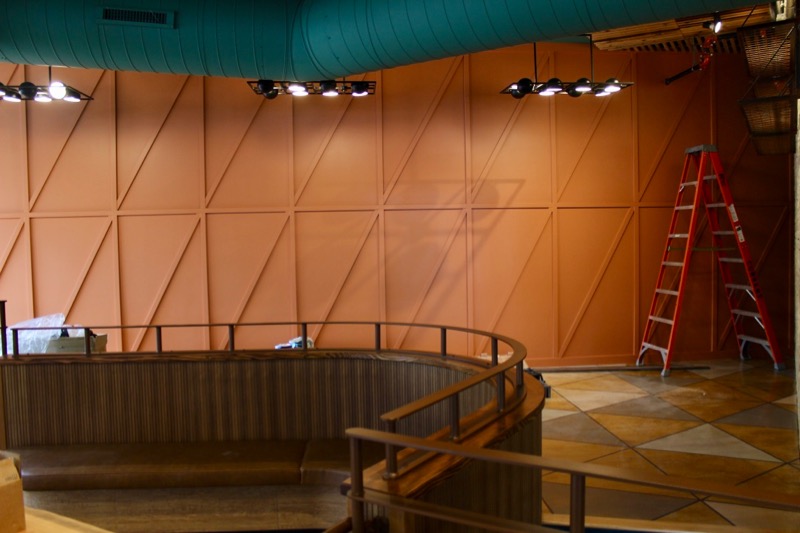 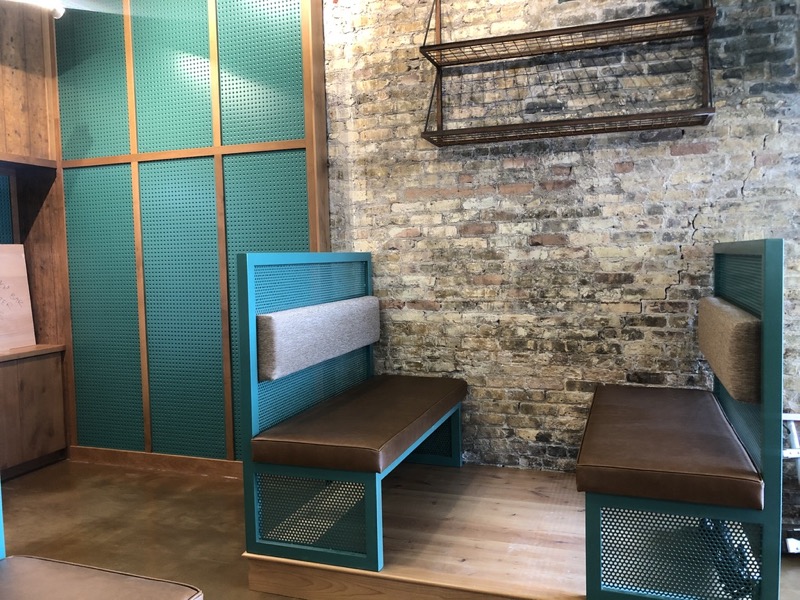 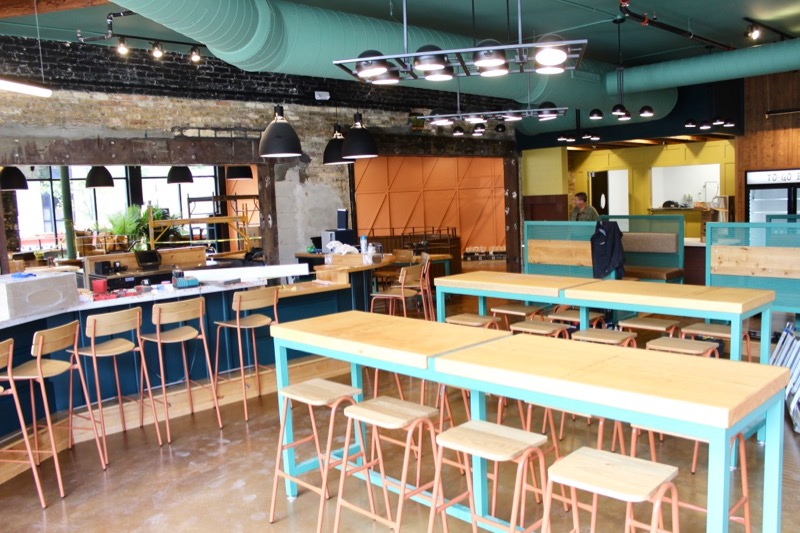 And then there are the restrooms.

A bold neon sign marks their location, proclaiming: FLUSH VIBES, a play on Lush Vibes, a 2017 Door County Brewing rye pale ale brewed with Azacca hops. Incidentally, it was brewed the same year as the launch of Hacienda Beer Co. 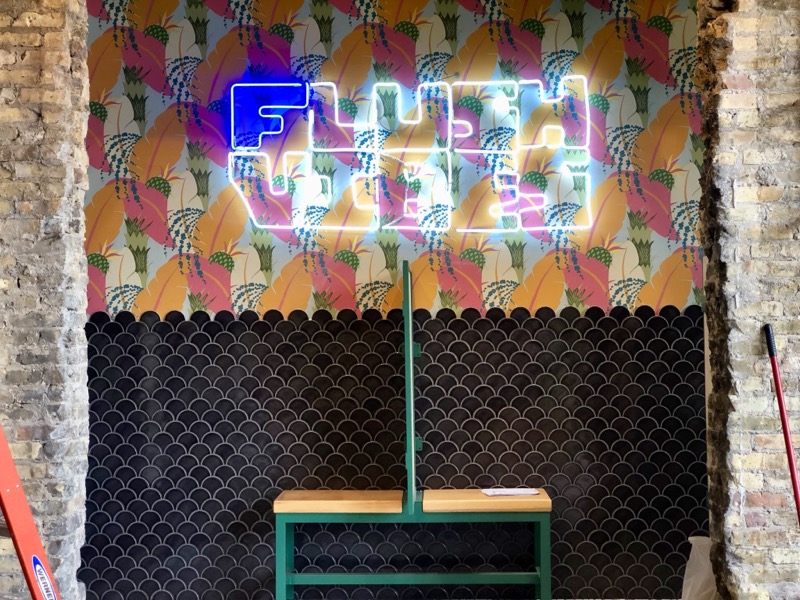 Those who appreciate the subtleties in design will note the beautiful contrast between the half-moon shaped reflective black tile (modeled after the scales in Hacienda’s armadillo-like logo) and the rustic stone flooring grouted in deep charcoal. 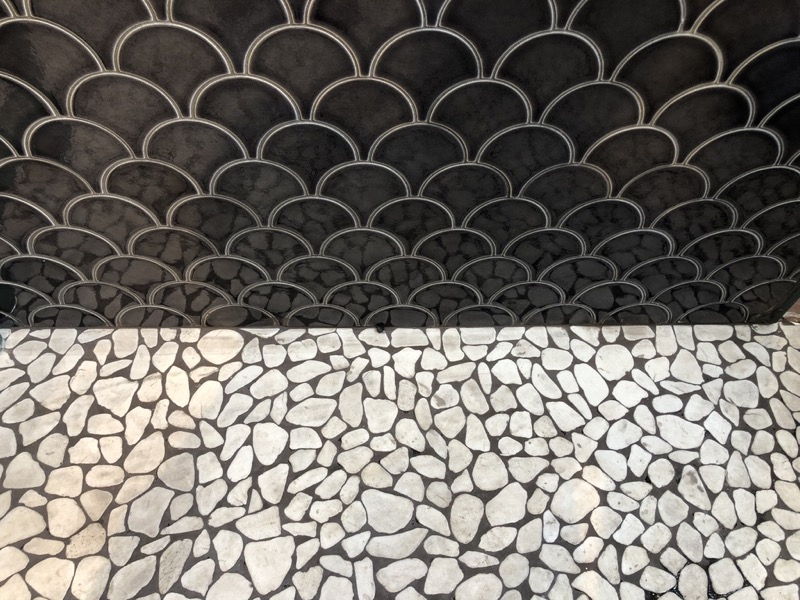 Each bathroom stall sports a contrast in textures thanks to 3D tile, smooth brightly painted walls and whimsical custom wallpaper designed by an artist friend of the brewery. 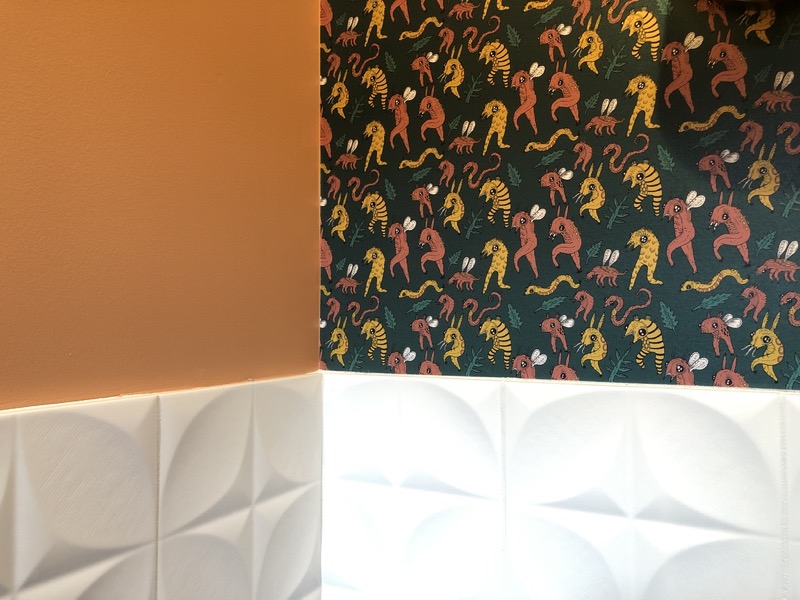 About a dozen beers from the Bailey's Harbor brewery will be available on tap.

Selections will include It Just Does Weird Things (IPA dry hopped with mosaic, el dorado and citra); I’m Not a Doctor (a Thai iced tea-inspired IPA with lactose); Time is an Illusion (double IPA dry hopped with Mosaic, Azacca and Simcoe); Does Anyone Work Around Here? (unfiltered lager dry hopped with Simcoe); and Tropi-Choco (milk stout with cacao and orange peel). 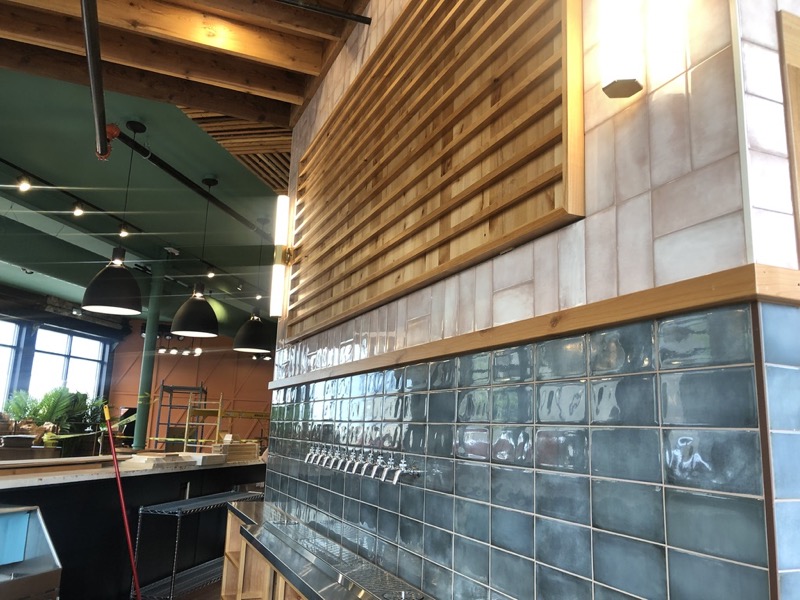 Among funky new brews there’s L’hiver (a foeder-aged mixed fermentation saison with ginger, green cardamom and orange peel); There is No Other Way (gin barrel fermented mixed culture ale with lime zest, lemongrass and pink peppercorns); and Am I Coming in Clear (a saison dry hopped with Motueka and naturally conditioned with brettanomyces).

For those wishing to take beer to go, bottles and four-packs of select brews, as well as growlers will both be available for purchase. Meanwhile, a full espresso bar will accommodate guests seeking an alternative to beer (or a bit of caffeine).

The kitchen, which was still coming together during our visit on Wednesday, may also be up and running for opening weekend. If not, the taproom is likely to call in assistance from a few local food trucks.

Once it’s inspected and fully opearational, Chef Manny Torres – whose experience includes work at c.1880 and Hotel Madrid – will head up the kitchen, which will push out a simple, beer-friendly menu for both lunch and dinner.

Hacienda Beer Co. will be open on Saturday, June 1 beginning at 11 a.m. De la Buena will break in that brand new stage beginning at 9 p.m.