"Christmas at Graceland" may be bad, but it's bad with flavor and a personality. By the end of December when I'm done writing about these movies, I bet I'll still remember this one - and pretty warmly, too.

On Nov. 9, 2017, during an OnMilwaukee editorial meeting, pop culture editor Matt Mueller brought up the craze of Hallmark Christmas movies. It was a decision he would come to immediately regret, as he was quickly punished assigned to watch a new Hallmark movie a week during the holiday season and write about his discoveries and loss of dignity.

One year later, having learned absolutely nothing, he made the mistake all over again.

These are the returning chronicles of Matt's Hallmark Holiday Hell.

Well hey ya'll, won't ya come on in from over yonder, stir up some sweet tea and watch yourself some "Christmas at Graceland," ya hear! And hoooo mama, I reckon this picture show is rougher than an alligator covered in sandpaper comin' down the last turn at Talladega Speedway!

A big-city and/or corporate Kellie Pickler arrives in a small town in the hopes of helping her company complete a buyout of a local banking branch. In the process, she stumbles into a handsome former fling and singing partner who's fallen out of love with the holidays thanks to his job is hard, but also has a big Graceland show to put on. Will she seal the deal and take the stage again, while also thawing his own frozen, Grinch-like heart? And will they find the greatest Christmas gift of all ... love?

Except the small town, in this case, is Memphis. Sure, it's no Chicago in terms of size, but it's still the 25th largest city in the country. And also nobody has fallen out of love with the holidays because nothing bad could ever happen in Memphis. And also this movie was directed by the Memphis Department of Tourism.

Yes, yes, the movie stars "American Idol" finalist and Southern twang enthusiast Kellie Pickler and Hallmark regular (and former "True Blood" performer) Wes Brown. But we can talk about them later. What I NEED to talk right now is Happy the Dog. 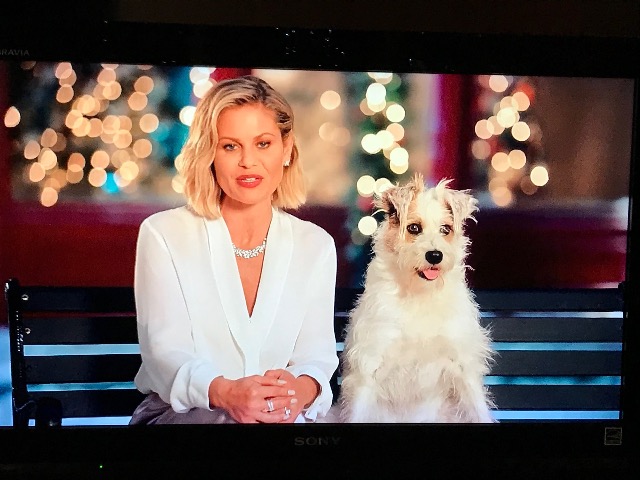 That dog does not look well. He didn't move at all during this little promo segment, either. If I didn't know any better, I would say that glaze-eyed dog died and has been stuffed for posterity. Sure, maybe he just needs a good grooming, but I'm sticking by my theory that Hallmark is "Weekend with Bernie"-ing this puppy.

That's right; this isn't just a Hallmark holiday movie. This is a country-fried Hallmark holiday movie. And much like a country-fried steak with extra gravy, "Christmas at Graceland" is bad for you – but in the best, most delectable way possible. I laughed A LOT watching this movie – mostly not on purpose, but hey, that's still entertainment. It's definitely more than the cold empty void that was "It's Christmas, Eve."

Like that movie, "Christmas at Graceland" stars a country singer in Kellie Pickler. She's like the inverse of Leann Rimes. When it comes to her acting, she's actually rather charming and personable as Laurel Couper. No, she's not technically a GOOD actress, but she's got energy, enthusiasm, big animated reactions and a drawling sweetness that I enjoyed watching and made me root for her character. It's seriously amazing what an accent can do for a Hallmark movie. It's like somebody accidentally got hot sauce and fireworks in my cardboard-flavored ice cream. (Pro tip: Do not eat this.)

Like I said, however, Pickler's not actually good – especially when it comes to sparking anything resembling romance with Wes Brown, who plays Clay, her one-time lover and singing partner who she runs into while visiting Memphis on a business trip. (And now let's play America's favorite game: DIVORCED! OR! DEAD! WIFE! And the winner is ... neither? He's just single? I take everything back; this movie is trash.) He needs a final act for a Christmas show in town, so of course he books Laurel, rekindling their romance in the process ... or so I'm told because frankly these two behave more like BFFs than romantic interests. There's just nothing there, no matter how many cutesy dates and duets you give them. I give them a year.

Weirdly enough, the worst part of Pickler's performance is her singing. Maybe her typical country tunes are better, but somehow her already thick Southern accent cranks the nasally twang up to 11 for these carols, and it is ... a lot. So much glottal nonsense and vocal goop. Then again, it's not like the script gives her much help; she basically only sings one song the entire movie: "Silent Night." Casually singing to her precocious daughter with an acoustic guitar? "Silent Night." Performing a supposedly romantic duet with Clay by the fire? "Silent Night." Caroling with the family? SILENT GALL DANG NIGHT! By the end of this thing, I would've tolerated "The Christmas Shoes." At least it would've been something different!

Things get particularly egregious, however, when it comes to Laurel's hotel, The Guest House at Graceland – a real hotel that REALLY got its money's worth when it bought product placement in here. According to this movie, The Guest House is the fanciest hotel in the world with the nicest staff on the face of the earth – so nice that they'll not only let you bring a real Christmas tree into your room, but they'll help you carry it in! Seriously, Laurel's room is larger and nicer than my apartment. THEY HAVE A PIANO! The script is THIS close to saying that, if The Guest House existed in Bethlehem while Jesus was being born, they would've had room in the inn. Who even needs a story when you have a locale as glorious as THE GUEST HOUSE!? IN BEAUTIFUL MEMPHIS!?

There is, however, a plot – and you know how it goes. Pickler is there to finish up a deal for her nightmare boss Mr. Hatcher, gobbling up a small local bank branch run by the nicest man in the city. I would dare to call him the Guest House at Graceland of human beings. He throws a Christmas party for his employees, and it is the loudest, craziest work party I've ever witnessed – and I'm including the one from the very not-a-Hallmark movie "Office Christmas Party." He also refuses to accept the deal if it comes with any "redundancy" firings or cutbacks, something Mr. Hatcher finds very confusing because he's never had a soul.

But seriously, Mr. Hatcher sucks. He assumes the deal's not done yet because Laurel is bad at her job, so he requires a video conference where the friendly bank guy says that she's great and friendly and a terrific ambassador for his company ... to which Mr. Hatcher harrumphs that he SIMPLY CANNOT BELIEVE she hasn't finished the job yet. True, she's very bad at listening during meetings, and she spends much of the running time saying she's working on ways to cut costs (while clearly never working on ways to cut costs). But she's clearly not the problem with this deal, dude. And just wait until he finds out Laurel has a singing gig while in Memphis.

In conclusion, I nominate we launch Mr. Hatcher into the sun.

So why does Laurel put up with his nonsense? Because there's a promotion awaiting her if she does well – and she could then move up to New York. But this is a Hallmark movie, so she obviously is warmed by returning home to Memphis, running into Clay and getting back into singing. And even though she's called back to the office (and right before the big Christmas show too!) with good odds of a promotion, she nixes it for Memphis – and working for the nicest man on earth rather than the antichrist.

She also stays for the big show, where she OH MY GOD NOT "SILENT NIGHT" AGAIN!? And also she wears this lovely long red gown that ... she apparently packed for this short business trip? And it has no wrinkles despite being tucked assumably in a suitcase this entire film? TRULY ANYTHING IS POSSIBLE WHEN YOU STAY AT THE GUEST HOUSE AT GRACELAND! Everyone in the crowd is also wearing warm coats while she's wearing this sleeveless dress, but instead of snagging hypothermia at the end of the show, she snags a kiss from Clay and a Merry Christmas.

By the end of the movie – and especially when the fourth "Silent Night" kicked off – I cackled. I cackled A LOT during "Christmas at Graceland." It's a dopey, obvious movie – from the plotting to even just the product placement. But it's also nice and warm-hearted and more colorfully shot than the usual beige Hallmark movie. It's even briefly more honest about the classic battle between dreams and responsibilities than most of the channel's movies – even if you know exactly which will win out in the end.

And while Pickler's not great, she seems just so gosh darn happy to be there – and oddly enough, so was I. "Christmas at Graceland" may be bad, but it's bad with flavor and a personality. And by the end of December when I'm done writing about these movies, I bet I'll still remember this one – and pretty warmly, too.

Not that I needed any more excuses to drink heavily while watching Hallmark holiday movies, but thanks to Wide Open Eats, I found this Hallmark drinking game created two winters ago by human saint Brittany Graves and posted on Facebook. So let's go through the checklist and see how crushed we can get off Christmas cliches!

As for the bonus categories, there's obviously no Candace Cameron Bure or Lacey Chabert, so there's no shots. It doesn't snow on Christmas, and there's not really a cynic to be won over by the holiday spirit. Take that back; Mr. Hatcher is a cynic – but he's such a crappy person and an even crappier businessperson that I hope he never finds any Christmas spirit ever. I wish there was a Marvel-style scene at the end of the credits in which his car gets plowed in and the financial company goes out of business and he has to burn his fancy suit for warmth. I may be a little vindictive.

Anyways, I didn't need those final drinks anyways. "Christmas at Graceland" already served up enough booze to give me a voice even more slurred than Kellie Pickler's mid-song.