My final trip into Hallmark hell is "Royal New Year's Eve," the story of a lowly magazine assistant falling in love with a prince and ... wait, did I just get tricked into watching Netflix's "A Christmas Prince" again?!

On Nov. 9, 2017, during an OnMilwaukee editorial meeting, pop culture editor Matt Mueller brought up the craze of Hallmark Christmas movies. It was a decision he would come to immediately regret, as he was quickly forced assigned to watch a new Hallmark movie a week during the holiday season and write about his discoveries and loss of dignity.

These are the chronicles of Matt's Hallmark holiday hell.

JOY TO THE WORLD, I'M DONE WATCHING HALLMARK MOVIES! Let's wrap things up with "Royal New Year's Eve," about a lowly magazine assistant with big dreams falling in love with a prince and ... wait a second, did I get tricked into watching Netflix's "A Christmas Prince" again?! NOOOO!!!!

A big-city and/or corporate fashion magazine assistant arrives in a small town in the hopes of turning into a designer. In the process, she stumbles into a handsome prince who's fallen out of love with the holidays thanks to he's supposed to get married on New Year's Eve and become royalty – what a drag. Will she throw the perfect party and also design the perfect dress, while also thawing his frozen, Grinch-like heart? And will they find the greatest Christmas gift of all ... love?

Except the small town part. And minus the holidays stuff, because despite having New Year's Eve in the title of the frickin' movie, it barely feels like a festive seasonal film. Might as well be "Royal Arbor Day's Eve."

Jessy Schram stars as our perky wannabe fashion designer. No, you do not recognize her from "Pitch Perfect" – though she does look like a composite sketch of all the blonde Barden Bellas. You do, however, probably recognize her from the final season of "Mad Men," when she played Pete's other woman, West Coast real estate agent Bonnie Whiteside. 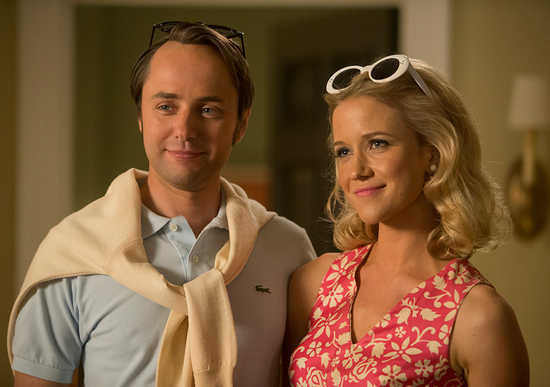 Her British prince counterpart is Sam Page, who is definitely not British. His accent sounds more like a very pretentious Stewie Griffin impression. I admittedly have a bad ear for accents, though, so just to be sure I wouldn't mock an actual Brit for having a goofy voice, I checked his IMDB page and discovered Sam Page is originally from the distant shores of ... Whitefish Bay?!

Oh, and if you were wondering what former Charlie's Angel Cheryl Ladd's been up to, the answer is playing the villain in a Hallmark romantic comedy.

If you're only going to watch one thing this year about a prince falling in love with a lovely everyday American, well, maybe just wait for the real-life royal wedding coverage to start. If you want to start swooning sooner than that, however, "Royal New Year's Eve" is definitely the route to go over Netflix's "A Christmas Prince."

For one, Hallmark's version of the story doesn't look like it was filmed in a dingy Eastern European parking garage. "Royal New Year's Eve" may not have the Christmas trappings of most Hallmark holiday movies, but it does at least have the channel's signature warm, gauzy visual style.

Secondly, its mismatched romantic pair isn't brought together by poor security and laughably unethical journalism. Sure, fashion designer Caitlyn's beautiful, one-of-a-kind designs look more for a prom queen than an actual queen, and its behind-the-scenes magazine drama is like the Kids Bop version of "Devil Wears Prada," but there's nothing as offensive as our lead's notes and deception from "Christmas Prince."

But mostly, you should choose "Royal New Year's Eve" because, well, it's not half bad! As a holiday movie, it falls woefully short on seasonal cheer of any variety, but as merely a cutesy rom-com, it's harmless, competently sweet and occasionally even funny entertainment. The meet-cute between Caitlyn and Prince "Jeff," in particular,  is actually pretty clever, as she confuses him for a mere messenger boy (of course) and he plays along rather charmingly, insisting that if they run into each other again – aka when she discovers who he really is – she can't be embarrassed. Spoiler alert: They do, and she is. And it's truly fun and cute, not even just by Hallmark standards!

From there, the two continue their tenuous flirtation while he's supposed to marry his longtime girlfriend and cold spotlight hound Lady Isabelle and Caitlyn's supposed to make the future princess' breathtaking gown for the big party – which Caitlyn is also organizing because her evil boss Cheryl Ladd is a nepotism nightmare.

In fact, one of the biggest issues with the movie is that Ladd is TOO evil for the film. Most Hallmark villains are merely guilty of, I don't know, thinking Santa isn't real or eating the last candy cane, but Ladd's Miranda Priestly Jr. is legitimately evil, putting her entire magazines reputation and her designer daughter's future at risk to lie and conspire against her own employee. And then the movie just shrugs it off and forgives her at the end because she kind of, sort of apologized for RUINING OUR LEAD CHARACTER'S CAREER? I SAY NO, SIR! The movie should've ended with her character literally getting slapped with an wrongful termination lawsuit. Or maybe her falling out of their office building Hans Gruber-style. Hallmark doesn't usual bust out actual villains, and I can now see why: They're too nice to deliver any satisfying karmic retribution. I DEMAND PUNISHMENT!

Yes, Page's prince never feels like an actual prince either – not only because his accent couldn't sound more cartoonishly British if his dialogue was exclusively, "Tea and crumpets," but because he casually walks around the city with no press or anyone caring. And yes, the big final dress looks more H&M than high fashion. But Schram and Page are sweet and charming together, and the story's premise mostly doesn't get in the way of the classic fairy tale cuteness of an everyday woman capturing the heart of a prince, delivering exactly the fantasy you want – nothing more, but also nothing less.

So maybe "Royal New Year's Eve" doesn't end this column on a high note ("A Christmas Train" was still the best of the bunch), but at least the movie wraps up the season cozily in key.

Not that I needed any more excuses to drink heavily while watching Hallmark holiday movies, but thanks to Wide Open Eats, I found this Hallmark drinking game created last winter by human saint Brittany Graves and posted on Facebook. So let's go through the checklist and see how crushed we can get off Christmas cliches!

Since there's barely any Christmas, there's also no cynic to be won over by the Christmas spirit and no snow romantically falling on the special day. Add in the lack of a Candace Cameron Bure or a Lacey Chabert, and you'll end "Royal New Year's Eve" on the wagon. I nominate a new category, which is popping a bottle of champagne for the new year and then pouring it all down your throat! YAY!

In the midst of this startlingly sober moment, though, I'm also feeling a little sentimental about my time watching these Hallmark holiday movies. What did I all learn from this month of festive spirit, wholesome small towns, fashionable coats and "Full House" cast appearances? Well, for one, there are definitely worse things in the world than Hallmark movies – namely Netflix's imitation of Hallmark movies. Mostly, however, I learned that, when done right, there's something admittedly comfortable and occasionally even fitfully entertaining about a Hallmark movie. Sure, they're made to be beige and there's truly only five scripts spread across about two dozen films, but like returning home for the holidays, what it lacks in fanciness or flair it makes up for in cozy, familiar, predictable comfort.

But mainly I learned to never, ever speak up at editorial meetings ever again.