Located just off the main drag in Hartland, Beer Snobs Ale & Eats isn't exactly a tough place to find. But it's a true gem for Lake Country beer lovers looking for a place to sample something new.

Located just off the main drag in Hartland, Beer Snobs Ale & Eats isn’t exactly a tough place to find. But it’s a true gem for Lake Country beer lovers looking for a place to sample something new.

Walk into Beer Snobs, 122 Cottonwood Ave., and you’re walking right into a piece of Hartland History. The building, built in 1932, was originally a store that sold farm implements. But over the years it has been home to any number of businesses including Haselow Plumbing, the Lake Country Reporter and – most recently – Integrity Travel. 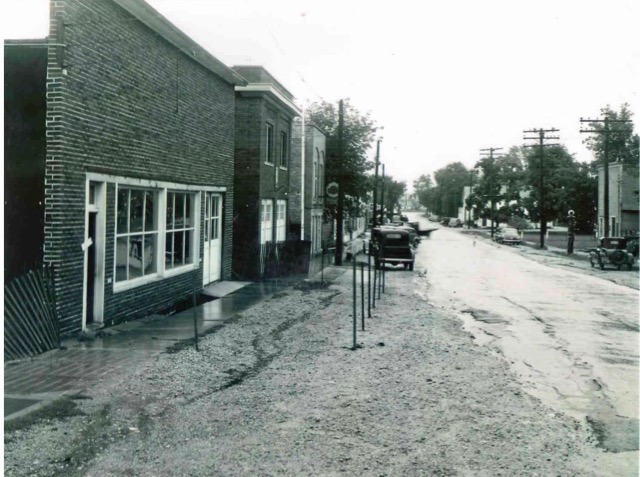 And thanks to the vision of owners Steve Berger and Harry Berg, the building is now a lively gathering place for families and beer lovers alike. 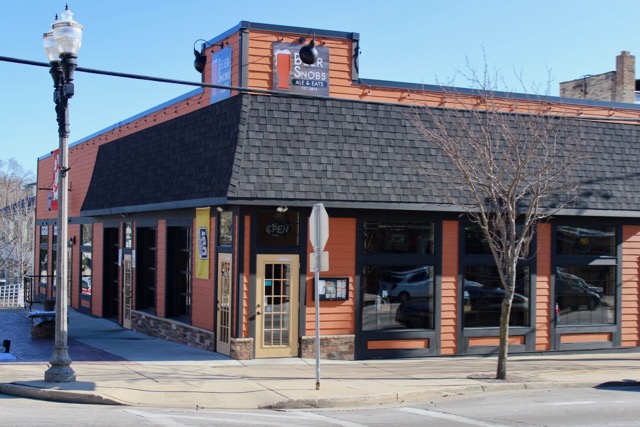 Take a peek inside today and you’ll find a bright, welcoming space that’s anchored by a squared-off u-shaped bar that sits roughly in the middle of the room. It’s a hub where regulars gather to chat, grab a meal and share a pint (or three). It’s also a prime spot to catch a Brewers, Badgers or Packers game. 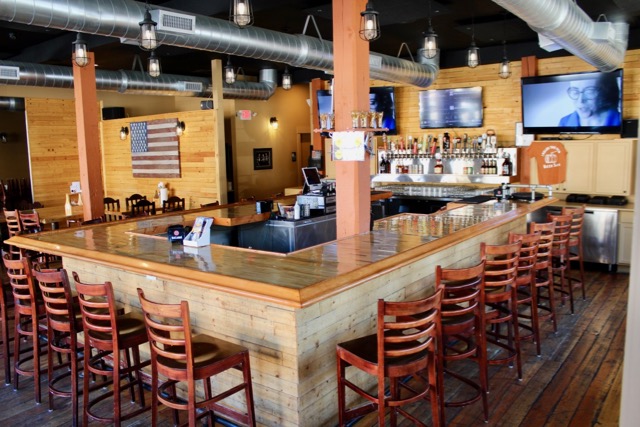 Behind that bar are 24 taps which showcase craft beers from across the U.S., from Maine to California and everywhere in between.

Meanwhile, there's a spacious dining area featuring an entire wall of garage doors that open to the exterior during the summer months. During the winter, a wall of windows provides the perfect (warm) spot to watch the snow fall on brisk winter days. 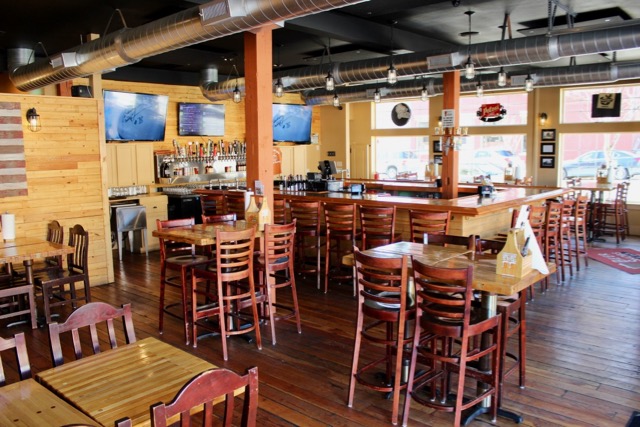 Oh, yeah. And there’s owner Steve Berger. He’s the owner, and he’s a fixture at Beer Snobs. In fact, he’s generally the you’ll find picking up the dishes, cleaning off the counters and talking with customers about beer. 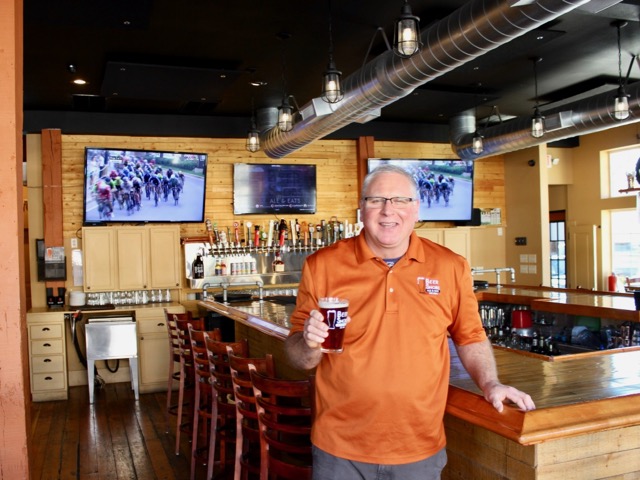 Beer Snobs Ale & Eats opened on Nov. 24, 2015. And the concept was a dream realized for Berger and Harry Berg, longtime friends and colleagues who mused together about what they’d do once they retired.

"We both lived in Hartland and our boys played hockey together," says Berger, who also spent years working for Berg at his business Quality Transportation Services. "One day we were chatting about retirement. He told me he was planning to pack his bags and move to Phoenix. I told him I wanted to open a little pizza place where I could serve craft beer and hang out."

The idea took root. One day, Berger says, Berg looked him in the eye and said "I’m not looking to retire yet. I want to pursue a new challenge. Let’s open a restaurant."

Berger admits he was taken aback.

"I looked at him and said, ‘Are you crazy? You’ve had this very successful business for over 25 years, and you want to open a restaurant?’ From there, I sort of dismissed it as one of his senior moments …"

But weeks passed, and then months. And the two found themselves looking for a place in Hartland to open a restaurant.

"We found the building, talked to the owner and told him our vision," Berger says. "He liked the idea, so we settled on a deal and bought the building. And then we hired a consultant to teach us how to run a restaurant."

They also hired Jim Marriott, a local architect, to assist them in bringing their vision to life.

"We just sat down and talked," he says. "And everything we discussed, he turned into a plan – walls and windows – he brought our vision to reality."

That vision transformed the nearly 100-year-old building into a cozy bar and restaurant with beautiful windows and a warm welcoming feel. Bowling lanes from the former Hartbrook Lanes were transformed into a bar and table tops. And they managed to preserve the beautifully well-worn original hardwood flooring along with the building’s support beams (now painted orange). 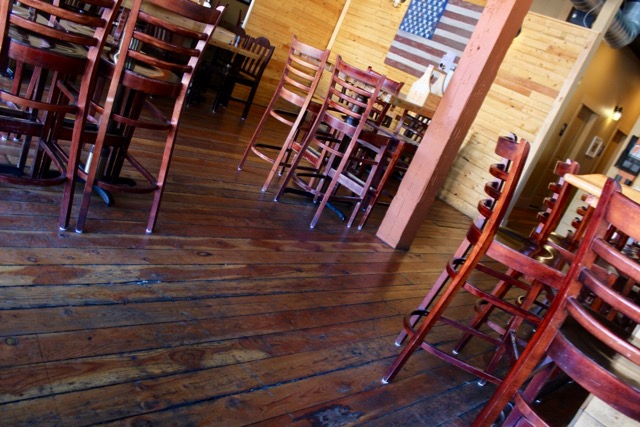 Meanwhile, the sidewalk alongside Beer Snobs was adapted to accommodate an outside seating area that seats up to 40 guests at ten tables. "It’s beautiful in the summer," says Berger. "We put up umbrellas and festoon lights and we turn up the fire pit on cool nights … People love to come here and just hang out." 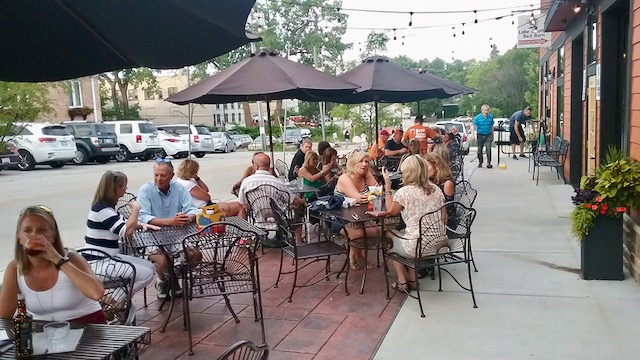 When it came to deciding upon a name, Berger says they were toying with a number of ideas, most of which utilized beer terms like "draught," "keg" or "pint."

"But one day Harry and his wife went to dinner," Berger says. "He was surveying the beers on tap and commenting on the selection. That’s when his wife turned to him and said, ‘You know Harry, you’re a beer snob’ ... He came back the next day and said: 'I have the name for our place.'"

Berg retired in December 2017, at which point Berger purchased his share of the business. "But he’s still part of this place," Berger says. "This was our restaurant, our plan. And he’ll always be part of that." 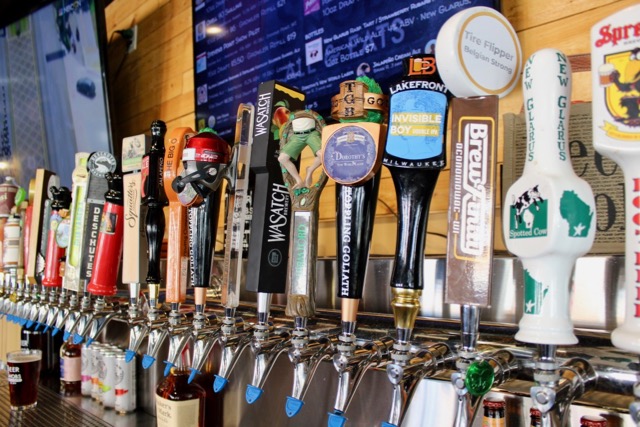 Berger’s passion for great beer started years ago. It began with drinking and advanced as he took on home brewing.

"Everywhere I went, I drank craft beer," he says. "And one year I decided I wanted to home brew. Once you start, it’s a sickness. You find yourself on Craigslist buying more and more equipment – fermenters, ingredients – and all of your time gets sucked up in brewing."

But Berger, who still brews in his spare time, says the pastime has given him a great deal of respect for what brewers do.

"If your beer is just OK, you aren’t going to make it in this business," he notes. "And there are so many places out there that are making great beer."

As a result, Beer Snobs features 24 domestic beers on tap, plus a variety of more unusual brews in bottles and cans. In fact, the bar and restaurant boasts the largest craft selection in Hartland and one of the biggest in the area.

"I’ve gotten to know the market over the years, so I know what will sell and what won’t," says Berger. "Overall, we focus primarily on simple, straightforward beers. Oso’s Big O and Spotted Cow are among our best sellers. But IPA’s are still a big piece of our business, increasingly the the hazy New England style, and the Kentucky Bourbon Ale has caught on, as well. We have one guest who always asks for cherries in his; it’s a little like an old fashioned."

Customers are also always invited to try something new.

"When someone comes in, we like to talk with them about what they like," Berger explains. "And we’ll give them samples of things we have on tap. Usually within three or four, we hit the mark in terms of finding them something they’ll like."

And there are always new things to try. After all, taps change out every week or so as the kegs are emptied. Even better, every time a keg is killed, the customer who purchased the last draw is rewarded with a Beer Snobs T-shirt. It’s a tradition Berger says they’ve observed since day one, and one they record with photos on their Facebook page. 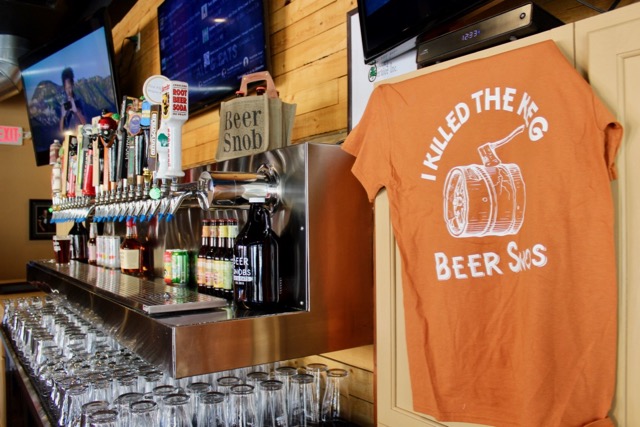 Beer lovers who’d like to get to know more about a brewery’s offerings are also invited to regularly scheduled "Meet the Brewery" events, which are held in the restaurant’s adjoining event space (a room which seats between 30 and 50 guests and can be secured for parties, rehearsal dinners and the like). 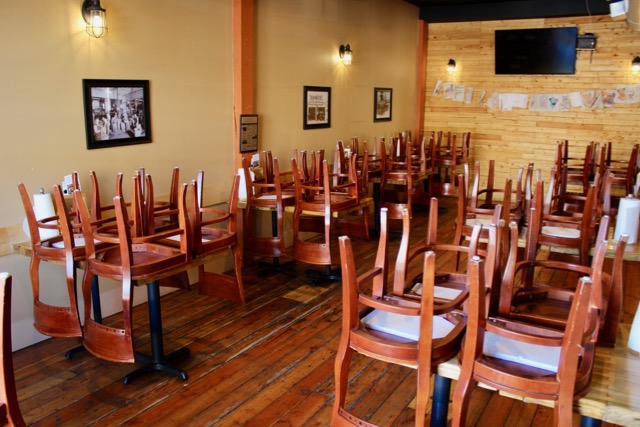 During each event, a representative from a brewery is invited to speak about their brewery and beers, which are sampled out to guests free of charge. After the event, guests who purchase one of the brewery’s featured beers goes home with a branded pint glass. The events are free, but Berger says they always ask for donations to the local food pantry.

"It’s rewarding for me because when I go and deliver the food that we’ve collected, I see the gratitude on their faces," he says. "And I often wish I could take our guests with me, because giving back just feels good."

Berger says that, as popular as their beer selection might be, the restaurant’s food is equally (if not more) popular. The simple menu includes pub fare staples, including appetizers, pizza, sandwiches and burgers (at least one of which is creatively topped with macaroni & cheese).

Mac n cheese burger with Bear Republic Red Rocket to chase it down.

The pizza, Berger says, is traditional Wisconsin style thin-crust, available with a variety of toppings. Guests are also invited to build their own pizzas with as many toppings as they like for a set price.

"We have customers who come in and order every single topping on their pizzas," he says. "We always joke that we have to drag it out on a fork lift"

"We served rye bread on the side for years, but people weren’t eating it," says Berger. "So we looked for an alternative. Our U.S. Foods rep actually told us about a place up North that was serving doughnut holes. And since we switched, we don’t throw anything away."

Berger says that, from the beginning, the vision for Beer Snobs was to create a casual dining establishment with great food and great craft beer.

"We also wanted to create a place where people felt welcome and well served," he says. "We’ve learned at every turn. Our guiding principle has always been, if we were the customer, how would we want it to be? And that’s driven everything that you do. When we train our bartenders, our servers and our hostesses, we really emphasize that aspect. And I’m here every day so I’m always able to make sure that happens."

Berger says to underscore that commitment to great service, he answers every review personally on Yelp and Trip Advisor.

‘Sometimes there are issues," he says. "But I always say that, for us, it’s not about IF you have a problem, it’s how you handle it. And that really defines how we approach everything. For us, the most effective advertising comes from people who visit and then tell their friends about the great experience they had."