The proposal selected last summer by the City of Milwaukee for the redevelopment of the former Schlitz tied house - long known as Humboldt Gardens, Mint Lounge and Zak's - at 2249 N. Humboldt Ave. is (potentially) moving forward, albeit slowly.

The proposal selected last summer by the City of Milwaukee for the redevelopment of the former Schlitz tied house – long known as Humboldt Gardens, Mint Lounge and Zak’s – at 2249 N. Humboldt Ave. is (potentially) moving forward, albeit slowly.

Developers Todd Hutchison and Kyle Mack recently filed a Certificate of Appropriateness application with the Historic Preservation Commission seeking permission to make changes they deem necessary for pushing ahead with a plan for first-floor retail and up to three condo units.

The three-story, 7,800-square foot building was designed by Charles Kirchhoff and constructed by the Schlitz Brewing Co. in 1890.

According to the application, "over the winter, while Todd and Kyle were working on securing a first floor tenant and financing for the building’s redevelopment, a significant portion of the southern brick facade fell from the one-story portion of the building damaging neighboring property."

That portion of the building was constructed to house bowling lanes.

Years ago, before the building was in the city’s real estate portfolio, where it arrived via tax foreclosure, the cream city brick veneer collapsed on the east-facing portion of the same part of the building.

"The City of Milwaukee determined that it was necessary to tear down the one-story structure due to significant degradation and safety concerns. At that point, the City of Milwaukee offered to sell the building to an LLC that Todd and Kyle were to create without having all of their financing in place, with the understanding that (the buyers) would replace the roof, tuckpoint and repair all exterior masonry, secure the exterior openings in a weather tight manner, gut the interior down to the studs (there is significant water damage inside the building and the structure needs to dry out) and maintain the building according to City codes until financing was approved for the building." 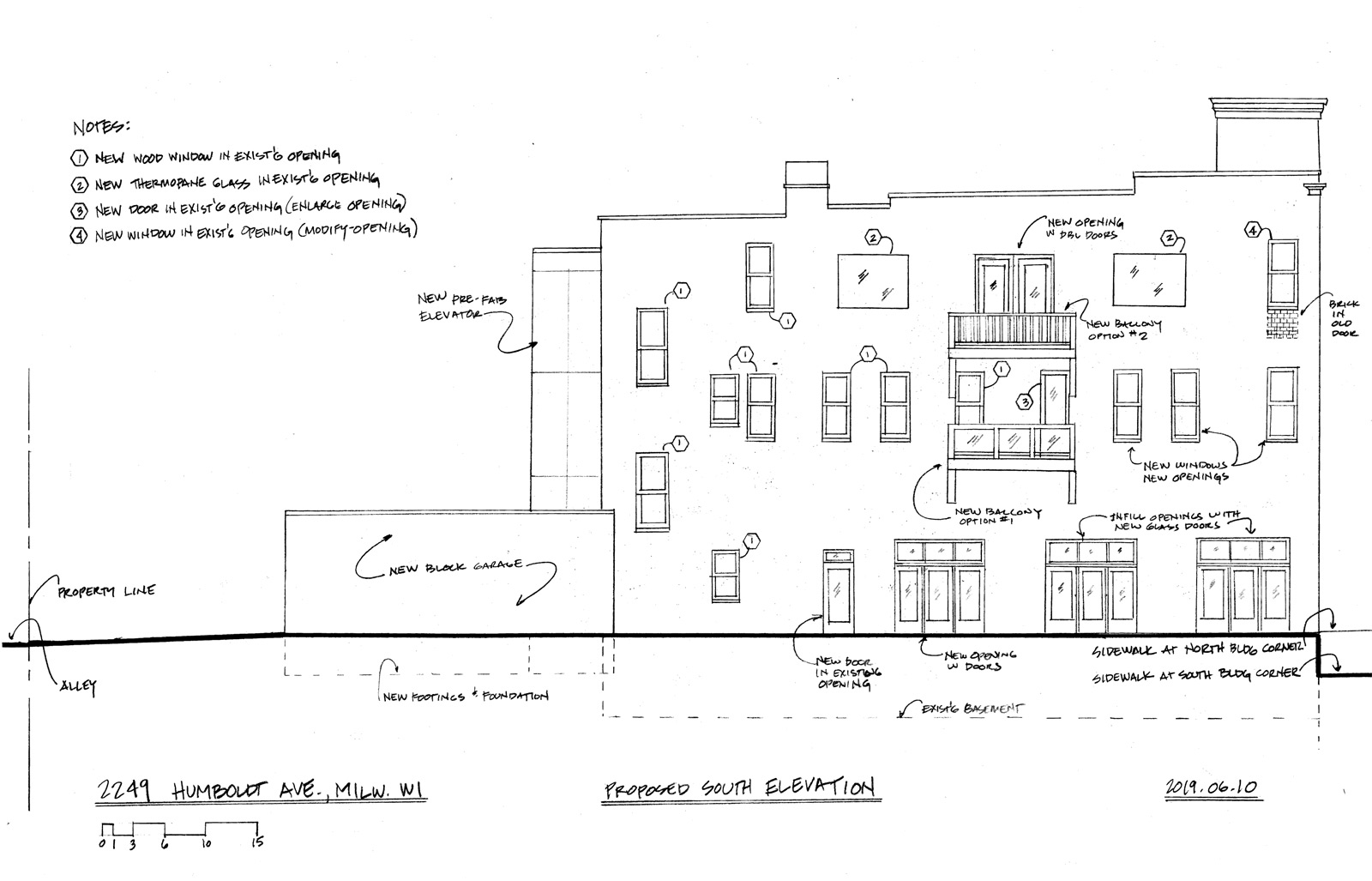 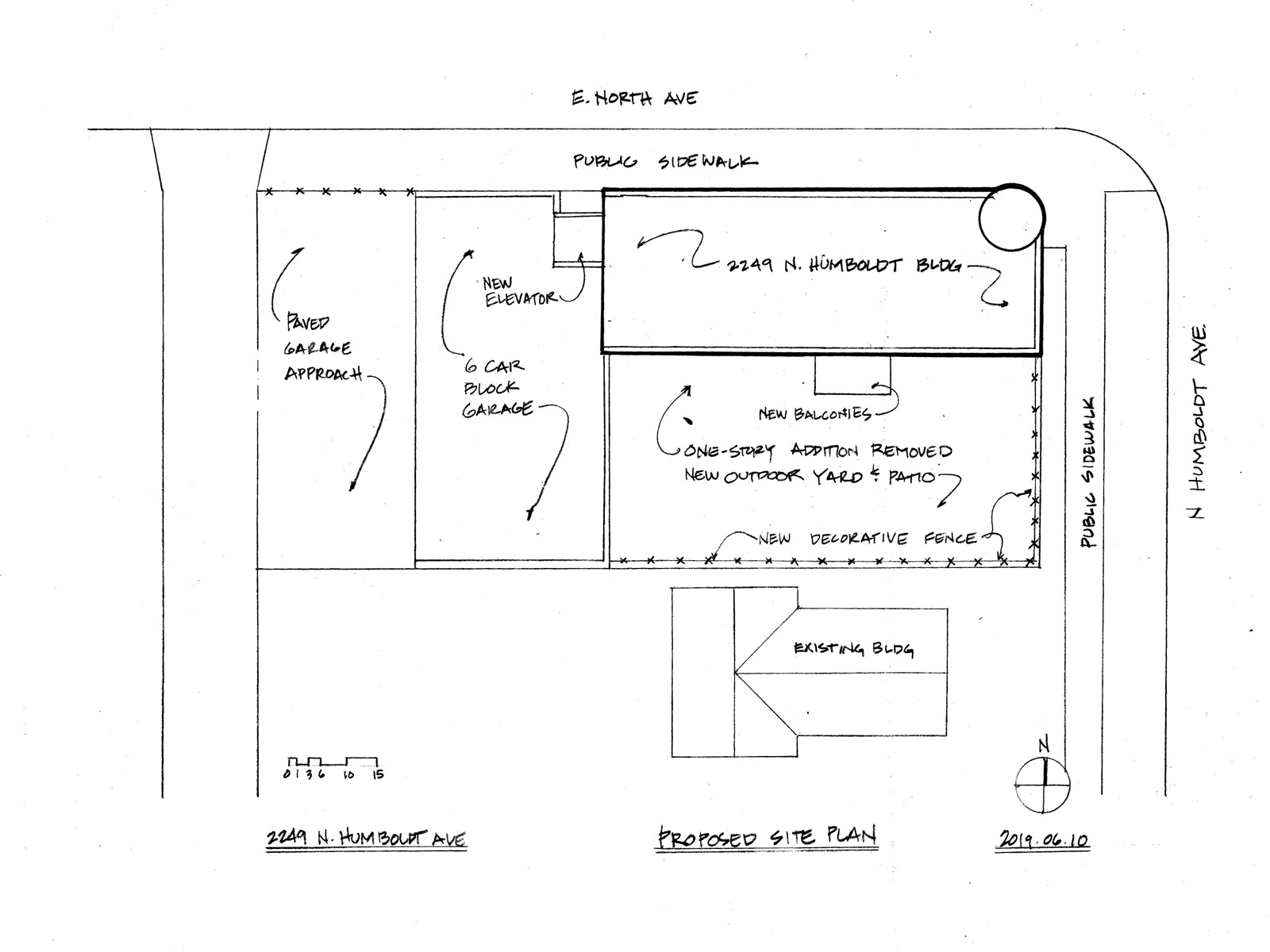 The estimated cost for making the building weather tight is around $150,000, according to the application.

Before they complete their purchase, the prospective owners are seeking approval from the Commission for a parking garage for up to six cars, a private patio on the site of the one-story structure, two balconies on the south side of the building, additional window openings, an elevator tower on the west side, new windows and a new roof, as well as scraping, washing, tuckpointing and painting of the exterior brick. 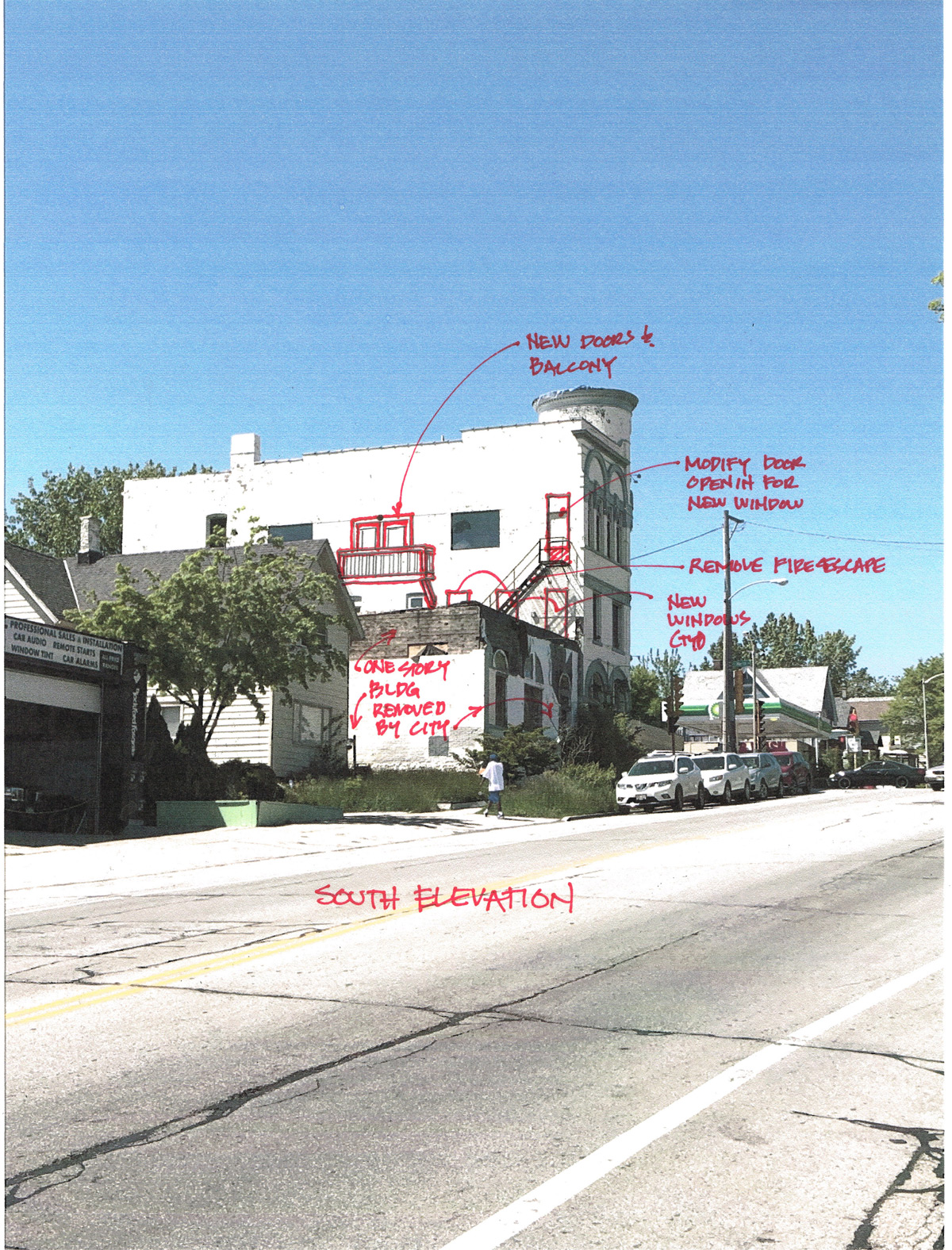 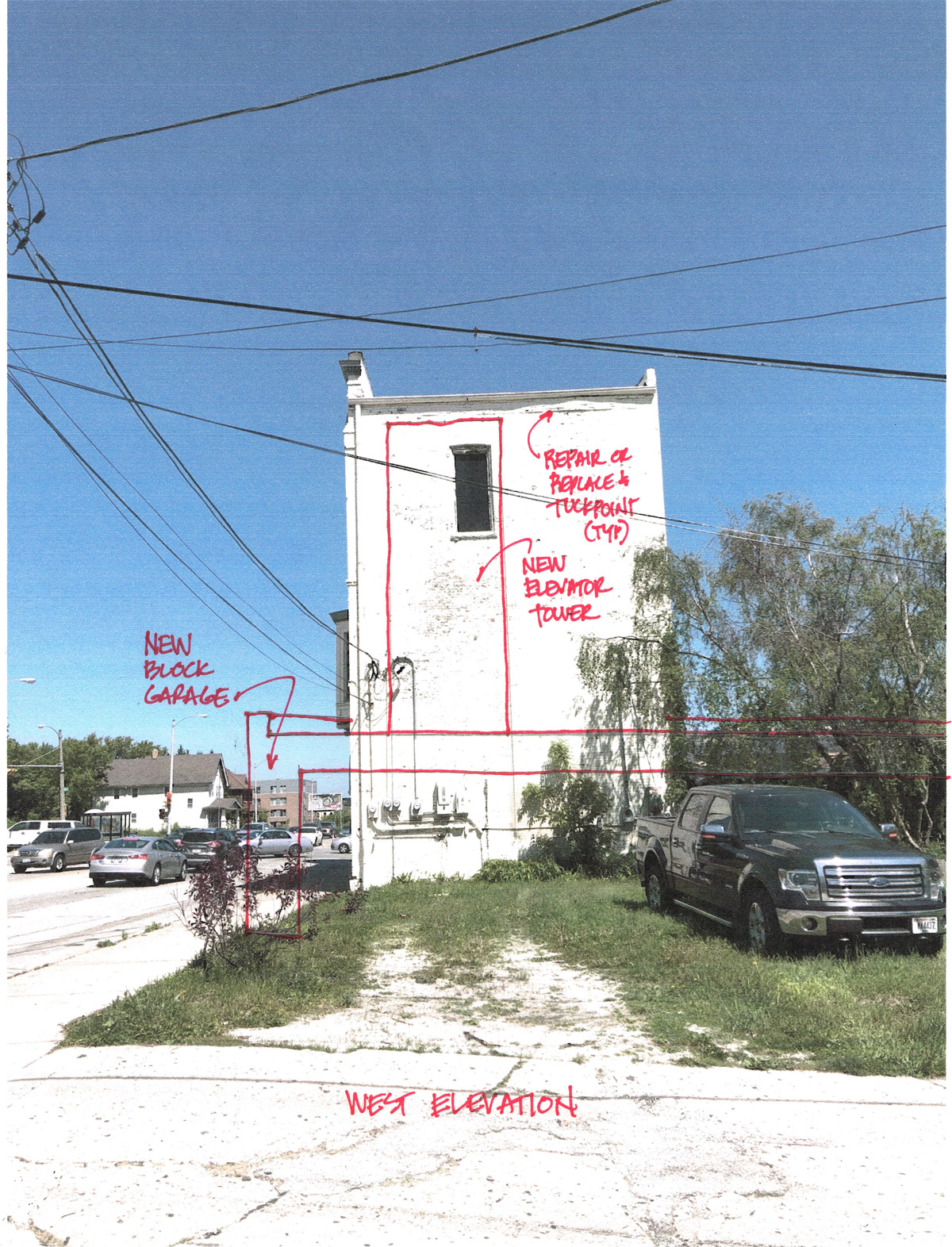 Such permission is required from the Historic Preservation Commission because the building was designated a historic property by the City of Milwaukee in January 2000.

"There’s apparently some concerns with a back portion that’s not in good shape: does it need to be demolished, how much does that cost, what’s the impact on the neighboring property. So, there are some issues that need to be sorted through, but we’re still interested in having that building brought to new life."

According to a report in BizTimes Milwaukee, the prospective buyers estimate work to get the building renovated at around $1.2 million.

With condos priced at $300,000, there is a shortfall in the financing math on the project.

"For years I’ve been really fond of this building, and we’ve been looking for a way to save it," Hutchison told the business magazine. "I’m still leery about taking ownership. Construction costs continue to go through the roof.

"The longer it goes on the less and less likely it is we’re going to be able to make it work," Hutchison added. "We haven’t given up just yet but we’re doing our best to try and make it work."