The night Turner Hall got doused with 1,000 liters of Faygo

When OnMilwaukee senior writer Molly Snyder found out the Insane Clown Posse was coming to perform at Turner Hall, the self-described "experience junkie," and amateur sociologist, knew she had to go and witness the sticky mayhem for herself.

In the early ‘90s, I went on a couple of mini "tours" with the Grateful Dead. I traveled to shows in Chicago, Indiana, Kentucky, Colorado and maybe a couple of other states I’m forgetting. It was, like the stereotype suggests, a hazy time.

While on tour, I ate some decent grilled cheese sandwiches in the parking lots of music venues and learned how to make a roach clip from the white stopper part of a Grolsch beer cap (if you don’t understand that reference you are truly a good kid), but I realized early on that I wasn’t really a Deadhead.

I was, however, fascinated by the culture of Deadheads. So I retired from tagging along after Jerry and started to read everything I could about the community of people who religiously follow the Dead.

As a person raised without religion by parents who were a former nun and a practicing Jew, I was always intrigued by spiritual groups – particularly of the culty variety – and I found those who worshipped musicians to be similar to those who worshipped a God or Goddess.

Eventually, I found photos and articles about Juggalos – devout fans of the Insane Clown Posse (ICP) – and proceeded to completely tumble down the internet’s infinite rabbit hole.

Juggalos (or Juggalettes for the ladies) are also devotees of other hip-hop/horror core bands on ICP's Psychopathic Records label. Their signature look sometimes includes clown/corpse face paint and wearing clothing with a "Hatchetman" on it. They share expressions like "Whoop! Whoop!" and "Family! Family! Family!" and "Down with the clown." Juggalos have an annual festival called The Gathering Of The Juggalos which, from what I can tell, is like a grosser, poor man’s version of Burning Man. 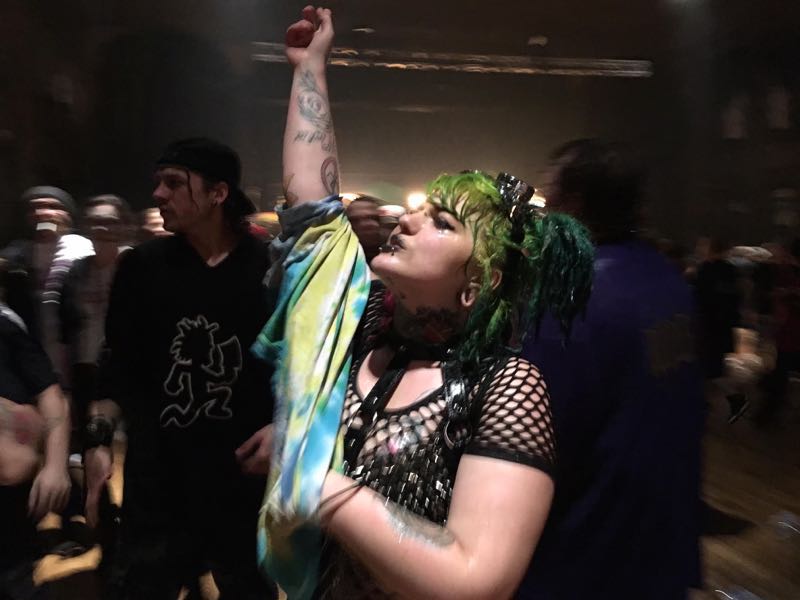 Juggalos also have a favorite drink and nifty party trick: shaking, spraying and dumping 2-liter bottles of Faygo soda. Faygo, like ICP, is a product of Detroit, and it's cheap, which is important because most Juggalos are poor, white folks from the Midwest. Insane Clown Posse members Joseph Bruce and Joseph Utsler, who perform in the guise of "wicked clowns" Violent J and Shaggy 2 Dope, grew up in Detroit and created a community – a family – derived from rap, embracing poverty, a mythology they call the "Dark Carnival" and all things Detroit.

In the midst of my Juggalo obsession, I wrote a story for OnMilwaukee's annual satirical April Fools page, which features all "fake" articles for one day, about a Juggalo bar opening in Walker's Point. (To this day I hear people talking about it as if it were true.) A couple weeks later, I found out ICP was coming to Turner Hall on their Riddle Box Tour, and knew I had to go.

My friend Jay Stamates is the co-owner of Jim’s Time Out, a wonderfully divey Downtown bar near Turner Hall, and he offered to have an informal ICP after-party. I've planned a lot of quirky events in my life, from a cheese carving and polka music event to something called a "Poodle Party," but this was on par to be the quirkiest of all.

We made fliers and posted to Juggalo Facebook pages about the after-party, making it clear we weren’t ridiculing anyone – just wanted to dip in and out of the culture for one night and one night only. It was important to me that I did not come across as mocking them in any way. I was curious and fascinated, but not poking fun. It was a cultural experiment. With Faygo. 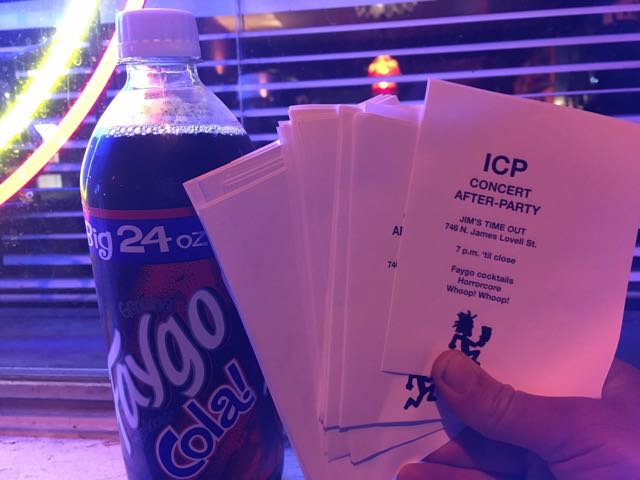 The night of the show, Jay, of course, brought bottles of Faygo – various flavors – to Jim's and loaded the jukebox with songs by ICP and related bands. We sat at the bar and had a drink (not a Faygo mixer; that would come later) and then my friends, Libby and Tandy, headed off to Turner Hall for the show with me and my partner, Royal. 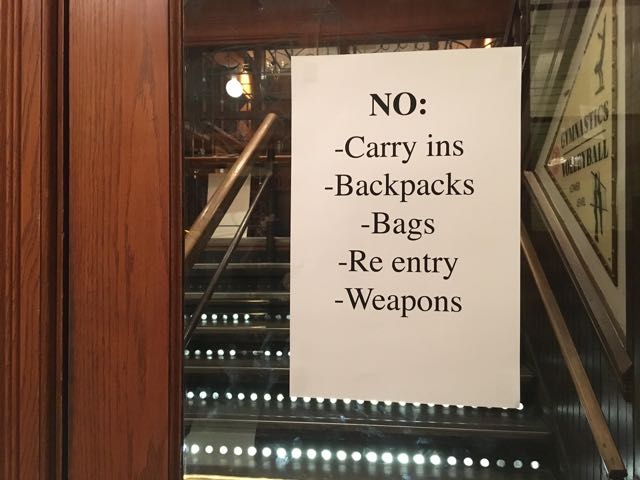 It was the first time I saw signs on Turner’s doors reminding patrons what the rules were and the first time I got frisked at that venue. We got inside the ballroom just as ICP had come on stage and were greeted with a pungent smell of body odor. There were small pools of Faygo on the floor and Faygo two-liters flying through the air, bouncing off windows and walls and the heads of Juggalos. Tandy said, "I just got Faygo in my ear!" 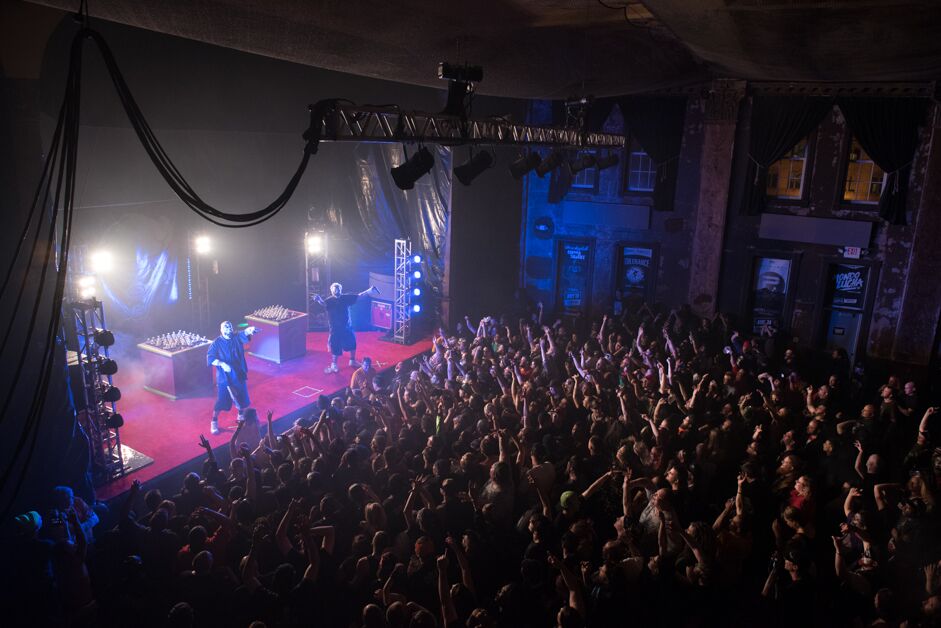 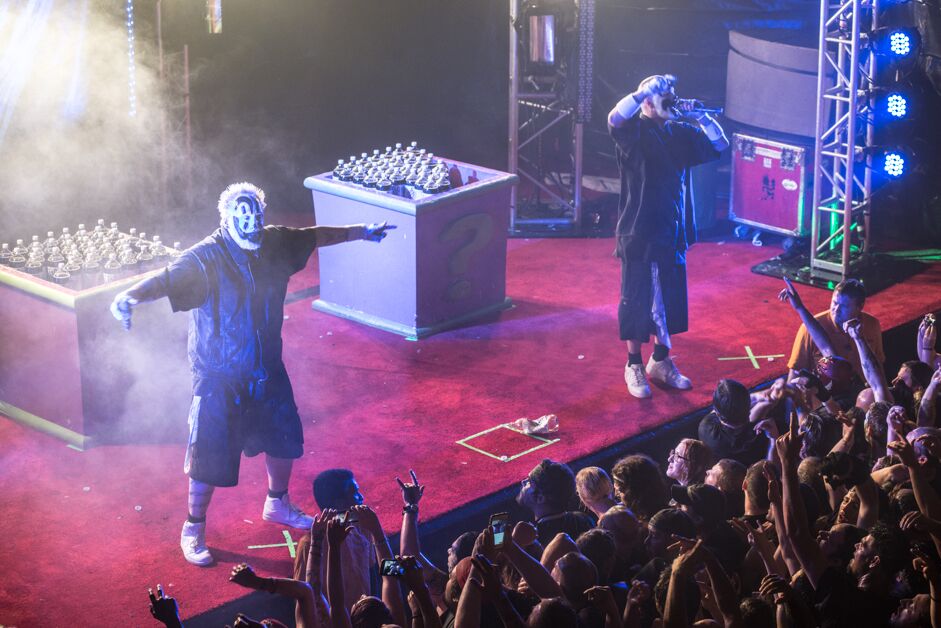 Many of the fans had their faces painted, much of which had been smudged or Faygo’d off at this point, leaving them looking like they had applied their clown makeup wasted – or maybe they had. Although the fans are primarily male (perhaps because of some questionably misogynistic lyrics), the females in the crowd – some of whom are full-on Juggalettes and some simply shadowing their sweethearts – are not afraid to show off their body, regardless of size. Cut-off-at-the-midriff T-shirts and ripped fishnet stockings were common on larger women, which was refreshing to see.

The majority of the Juggalos knew the song lyrics and shouted them while staring at the two rappers and fist pumping into the air. Royal said even the men standing at the urinals were staring straight ahead, chanting every last word. "I lived my life in the gutter/And this gutter is who I am/Take me back home to my gutter/And that's where I won't ever leave, again." 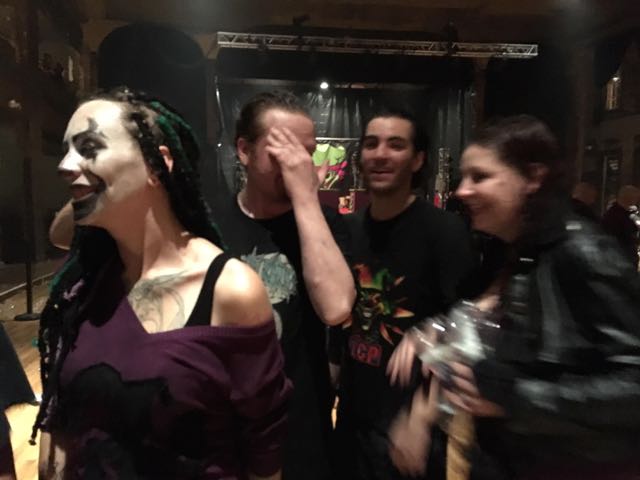 But most remarkable and forever stained on my memory is the sight of rivers of Faygo on the floor of Turner Hall. According to Pabst/Riverside/Turner employee Andy Nelson, the band brought in 70 cases of Faygo, but were told it had to be diet soda, which isn’t sticky. The soda was on stage with the band in two separate large crates and Violent and Shaggy grabbed bottle after bottle, sprayed it into the crowd and then flung the empty containers into the air.

By the end of the show, there wasn’t an inch of space on the floor that wasn’t wet and many of the fans were drenched in Faygo; swarms of people with stringy hair and clothing stained with soda and carnival makeup filled the space. One woman puked liquid onto the floor while someone was pouring a two-liter over her head and someone else standing next to her stopped chanting lyrics long enough to yell, "F*ck yeah!!!" 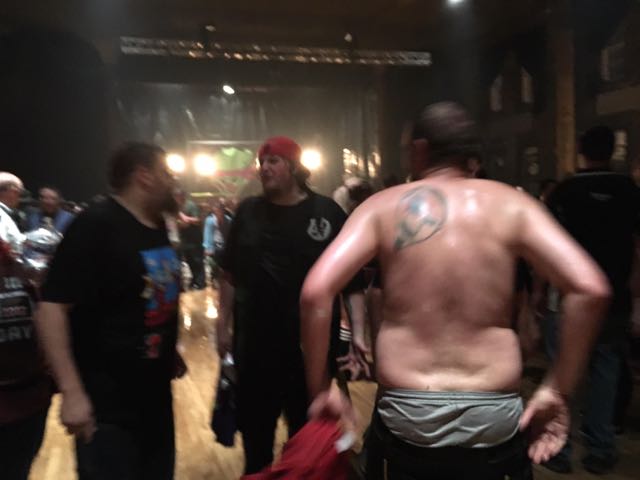 Marc Solheim, who also works at The Pabst/Riverside/Turner, was standing in the back next to us at one point and was completely unfazed by the band and the Faygo-ing. He said it wasn’t as bad as some jam band fans who "buy a beer to drink and a beer to throw."

However, not all venues are as soda-friendly as Turner Hall. According to a post on the ICP webpage, The Loft in Lansing, Mich., cancelled the second of two sold-out concerts because of "concerns about Faygo." The post went on to say, "... this morning they said ICP could perform the Riddle Box Show as scheduled ... but only if there was no Faygo! Well ... as every Juggalo knows, it ain't a f*cking Wicked Clown show without Faygo!" 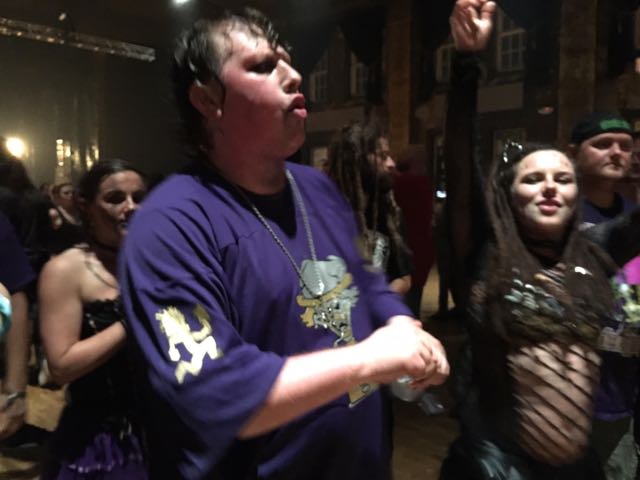 When the lights came up, there were hundreds, maybe 1,000, crushed Faygo bottles littering the floor of Turner and cleanup began before everyone was even out the door. Tandy, in exchange for drinks at Jim's, handed out all the fliers for our ICP after-party and even tried to get Marc to bring a couple to the band.

We headed back to Jim’s realizing that most of the crowd was from somewhere else and was driving back after the show or were too wasted to really comprehend what we were offering, but we still had hope.

In the end, exactly three Juggalos came to our ICP after-party.

I finally drank a vodka mixed with Faygo Redpop and interviewed one of the Juggalos, Andrew (last name withheld to protect the guilty), who told us about how he and his face-painted friends went to a fancy Downtown restaurant and had the cops called on them because they creeped out a guy in the restroom.

Although Andrew had been down with the clown for a long time, it was his first ICP concert.

"It was non-stop eruption of emotion," he said. "The only show I can compare it to was Rage Against the Machine at Alpine Valley in like 2007. Seriously, I've never seen anything else like it."

Unfortunately, Andrew ended up getting as twisted as an animal-shaped balloon by the end of the night and Libby, who is genuinely a really nice person, drove his passed-out ass home to West Allis.

As for me, I think I quenched my thirst for Juggalo culture. Or maybe that's just the Faygo cocktails talking. 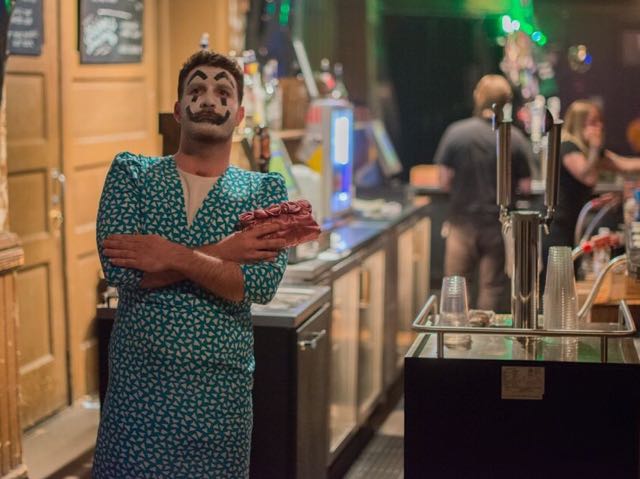 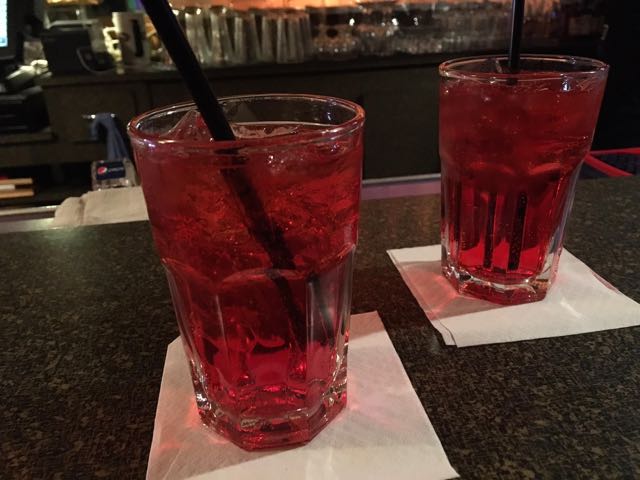 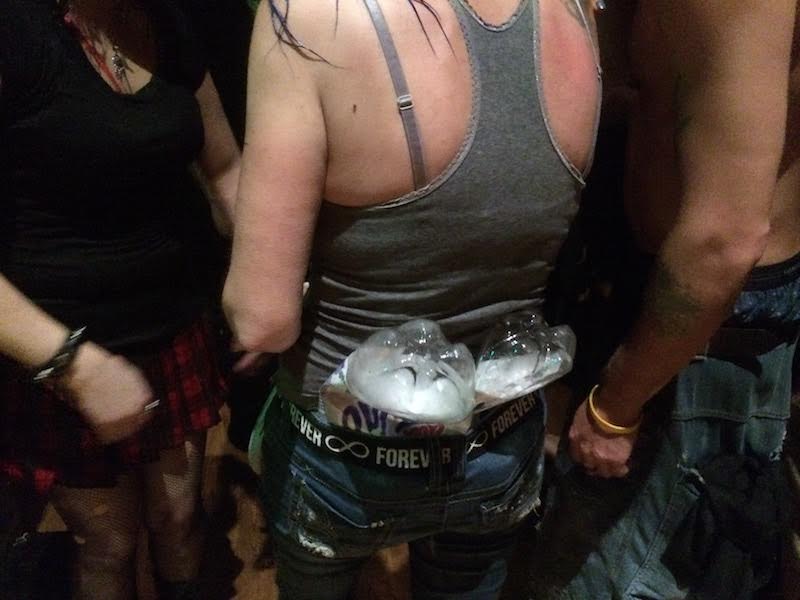