The distinctive blue box with the yellow lettering has risen where Drexel Avenue meets I-94 in Oak Creek. But while the exterior of the giant new furniture, home and meatballs emporium looks darn near ready, there's still a ways to go on the inside. We went inside to see.

The distinctive blue box with the yellow lettering that shouts "IKEA" has risen on the horizon where Drexel Avenue meets I-94 in Oak Creek. But while the exterior of the giant new furniture, home and meatballs emporium looks darn near ready, there’s still a ways to go on the inside.

We went inside the huge store – slated to open this summer – on Tuesday to take a look at its progress and get a tour from store manager Samantha Gravina. 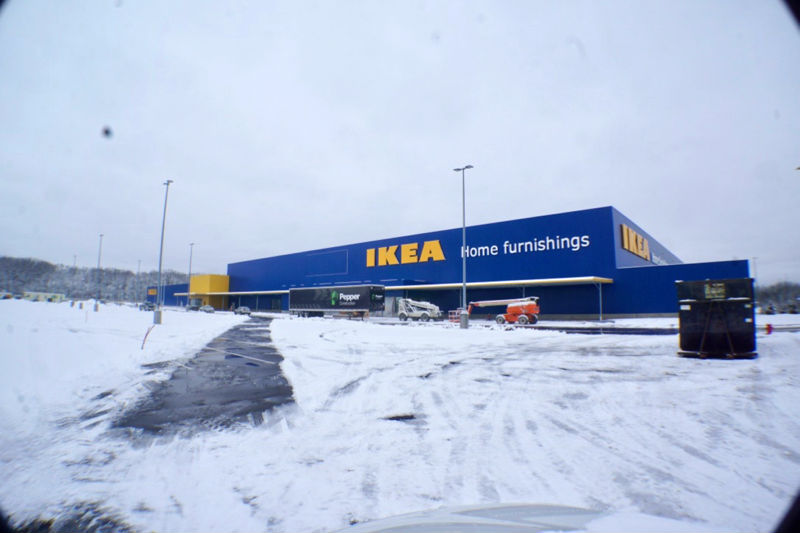 A Chicago native, Gravina has worked for IKEA for 18 years, including managing the Swedish company’s store in Bollingbrook, Illinois.

Gravina says the construction of the store is currently on time, and a more specific opening date will be announced in the coming months.

"The project team, normally about six to eight weeks before grand opening, will confirm a date," Gravina says. "We're not there yet. We rely on them to tell us where they're at. They're (saying), 'we're on track, we're doing great.'"

"You really feel like you're walking a neighborhood through various different room settings and homes," says Gravina as we pass the skeletons of walls that will delineate the different room displays.

"These rooms (offer) a good representation of the product when it's finished," she says. "So, you'll be able to decide to go off the path or not, but you'll be invited into whether that style meets your preference. We also set up our rooms to be specific: Are you living with kids? Are you living alone? Are you just getting started? Are you already married and established? What is your need? We try to tailor our room sets to the function of those groups. So it's not just furniture, it's also providing to make your life a little bit easier." 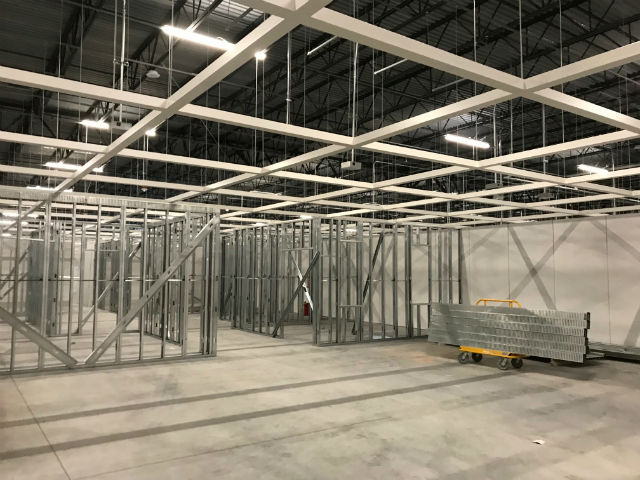 These settings, Gravina says, are not uniform across the company's stores, but, instead are tailored to each location's community.

"We did 50 home visits in the area. People let us into their house, and we talked about, 'what's your need,' 'what do you do here in Wisconsin that's different?' And we try to tailor the displays to help meet those needs. So, like the bars in the basement, it's a commonality here, so it's something that I know we're going to go after. We'll try to show you what you could do, not make you who we are. But observe who you guys are." 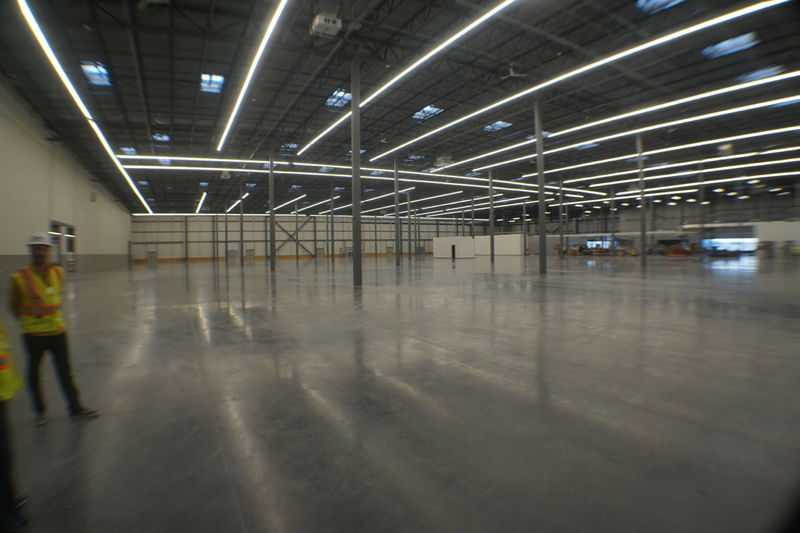 The self-service area will soon get its tall shelving units. (PHOTO: Andy Tarnoff)

As for the food, Gravina says, "We have the restaurant – which is about 350 seats – (there will be) full-service meals, soups, salads, sandwiches, meatballs, salmon – also our fan favorite – and desserts. That will also be where we'll host special events like crayfish parties, some of our Swedish festivals.

"Then on the way out we'll have a bistro that will serve cinnamon rolls, hot dogs, pizza, some more of a quick bite, if that's what you're looking for, and before the cash lanes will be the Swedish food market. So you will be able to take a lot of stuff home with you: meatballs, gravy, salmon paste, everything Swedish. 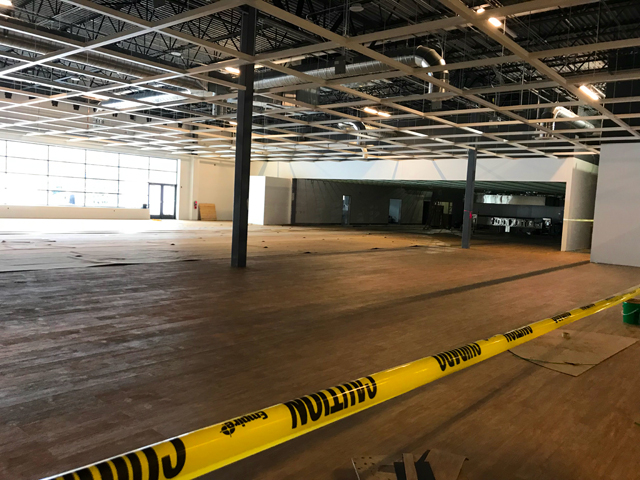 The flooring was just installed in the 350-seat restaurant and events area.

Although the store is similar in design to three built last year, this one will likely be unique among the 40 IKEA shops in the United States.

"They all vary somewhat," says Gravina. "Obviously by market and what they think the market potential is, based on volume. We're about 290,000 square feet and that's pretty typical of what we're building right now.

"All three of those stores were identical. They used the exact same footprint. They took the learnings from that – and also just Sweden comes up with newer, better ways, different things – and they switched it for here. So we are similar, but not exactly. Right now, we're the only one being built this year, so we will probably be the only one with this footprint."

Gravina says that she's already been hiring staff for the store, which will host a job fair in late February and will ultimately employee about 275 people. 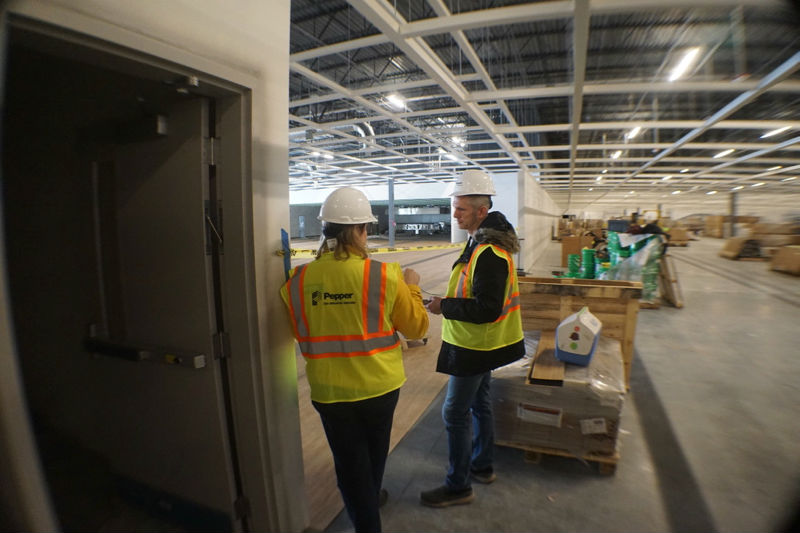 "We had a hiring blitz over the weekend," she says. "So these were people who went online and applied, and we hired 56 people in two days. There's a lot of interest in working at IKEA which we're really excited about. But the company offers great benefits. You're considered full time at 20 hours-plus with us – 401k, medical, vacation, sick, paid holidays, even our part timers get that.

Though the panels are not yet installed, the building's roof will get a massive solar array that Gravina thinks will be the largest on a retail building in the state. The company, adds IKEA Public Affairs Manager Tish Bracy, also owns two wind farms – one in Illinois and another in Texas – that already generate more power than the company's U.S. stores and distribution centers consume.

"The goal is for at least 90 percent of our facilities to be energy efficient by 2025. So we're really working hard to do that now," Bracy says. "We're giving back to the grid already, but they're constantly looking for ways we can keep improving."

IKEA sets opening day in Oak Creek, and it's sooner than expected