Work continues in Walker's Point on a 10-barrel brewery and taproom, announced last November, that will be an outpost for Minneapolis' Indeed Brewing. We stopped in for a look around and an update from co-founder Thomas Whisenand.

As the brewing boom continues in Milwaukee, craft brewers from beyond the city limits have also been joining in the fun.

Later this month, Door County’s Hacienda Beer Co. will open on the East Side, and work continues in Walker’s Point on a 10-barrel brewery and taproom, announced last November, that will be an outpost for Minneapolis’ Indeed Brewing.

Aside from a dumpster in front, it’s hard to see that work is progressing inside the single-story industrial building at 530 S. 2nd St., but crews have been prepping the area in front that will house the brewery, as well as the taproom behind it and, in the way back, an area with tables that will have a big garage-door style opening to embrace the warm weather, when we have it.

"We were looking in Milwaukee and were sold on Walker's Point pretty quickly," says Indeed co-founder Thomas Whisenand, as we walk through the space. "We were looking at a spot on 1st and National to lease, but we wanted to buy." 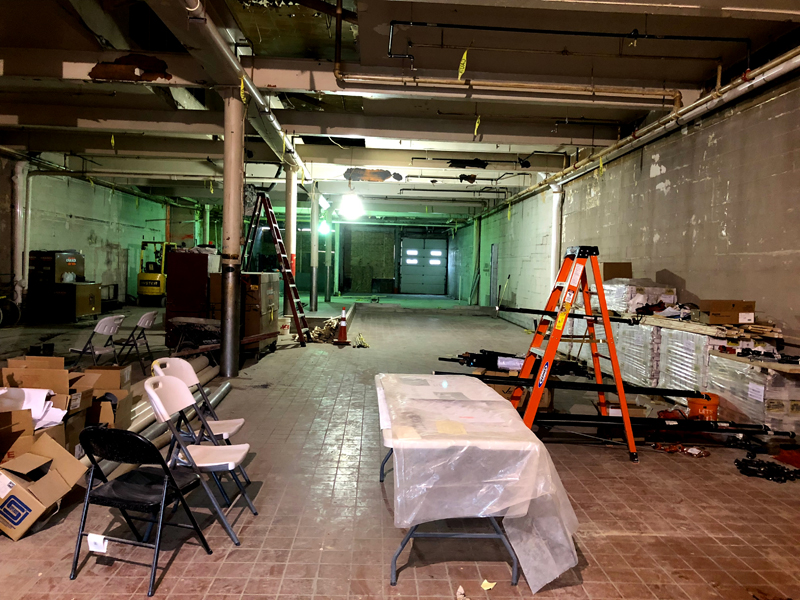 That desire to own its own place led Indeed to this low-profile building, erected in 1943.

"It was kind of easy to overlook," says Whisenand. "We were thinking, from the (sales) flyer on it, ‘that doesn't look like a suitable spot for retail.’ But then we got in here and we were like, ’whoa.’ We really liked this little spot here, with Anodyne right there and Milwaukee Brewing Company moving out – you know, a successful (brewery).

"And you've got some really good restaurants nearby that have been successful and open for a number of years, like Morel and Movida and Camino. It just has a feel very similar to what we have in Northeast in Minneapolis."

Waukesha’s WM Sprinkman will soon be installing a 10-barrel brewing system in the space, which customers will see as they walk past it toward the taproom, says Whisenand. Prep work has begun in that spot and the floor will be tiled in the next week or so.

"We’ll have 10 fermentation tanks, three bright tanks here," says Whisenand. "We’ll have the same things as back in Minneapolis, so we'll have a separator, a centrifuge for clarification. The brewery is going to be designed to be kind of our pilot innovation brewery.

"Minneapolis is a busier production brewery. This is a much smaller system and we can get much more innovative, much more nimble, try things out down here, and then maybe move them into Minneapolis eventually. 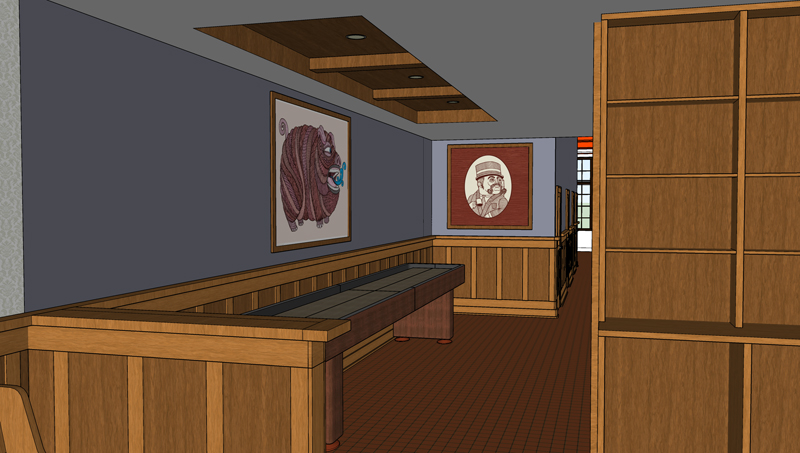 Whisenand says that the Milwaukee brewery will also make some of the same beers that are produced on a larger scale in Minneapolis because all the beer served in the taproom will be brewed on-site.

"Day Tripper Pale Ale is our biggest seller," he says, "and it will be served in this taproom. It will be made here."

The Minneapolis brewery has a canning line, but the Milwaukee brewery will not, and Whisenand expects that while growlers and crowlers will be filled here, there won’t be package sales of six-packs, at least not initially.

Currently, Indeed beers are sold only in Minneapolis and in some parts of Wisconsin and North Dakota. 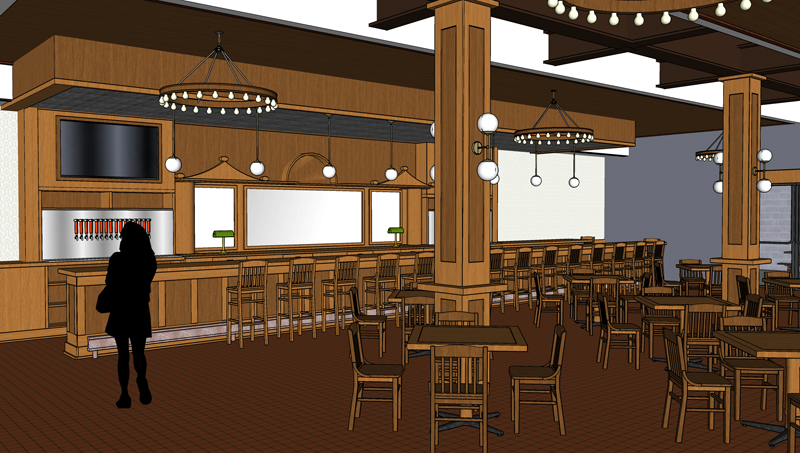 Milwaukee, he says, offers an opportunity for growth, but the kind of small-scale, steady growth Indeed is seeking.

"In Minnesota we can only have one taproom," Whisenand explains. "And 95 percent of our business, volume-wise, is outside of the taproom. But the taproom is a very high-margin, high-revenue part of the business, and so as we looked at our business we said, ‘how can we grow and do it in a way that's smart?’ And we said, ‘first of all we would like to have more taproom business and we can't do it in Minnesota, so what about Wisconsin?’

"We want to distribute beer in Wisconsin and be successful with it, but Wisconsin is a really tough state to be successful in, especially if you are from out of state. People from Wisconsin love Wisconsin products. So, the second part was to find a way to be relevant in Wisconsin. Building a brewery seemed like a good way to do that."

Whisenand says Indeed sees Wisconsin as integral to its long-term growth, because, he adds, Wisconsin is, "the only state that borders Minnesota that has any people in it.

"We don't have any plans for Chicago or Illinois or Michigan or anything in that area but if we do get our business to the point where we want to be there ... We’ve watched a lot of other breweries span a lot of states, and it's really hard to do that in a responsible way that really is looking long-term. But that's the kind of business that we are trying to build."

Whisenand says that Indeed sold about 15,000 barrels of beer last year and will probably nudge up to about 16,000 this year. 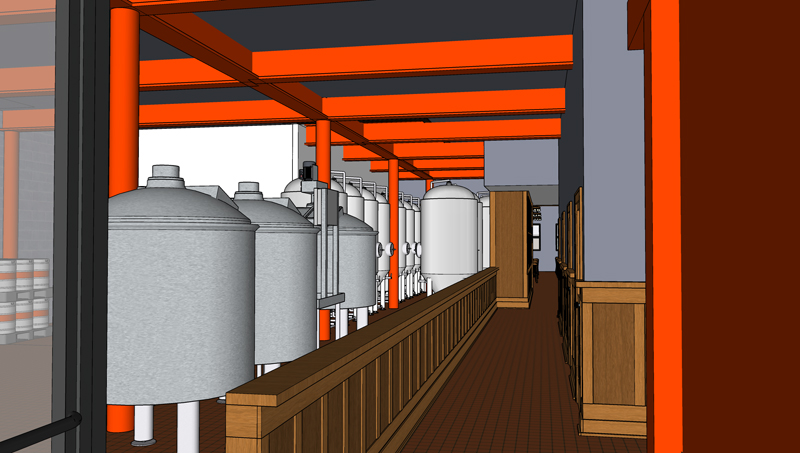 "Nothing crazy, like people who go from 16 to 32," he says. "We're growing, and I think more importantly we're growing internally, which is kind of the stage that we're at right now. Doing this will help with that."

The taproom – which will boast a vintage back bar that Whisenand was told was originally installed in the taproom at Hamm’s Brewery in St. Paul – will have a game room area, with shuffleboard, too.

In the back is a space that will have table seating and a big door that can be opened when the weather is good ... sort of like a patio, but with a ceiling and walls. 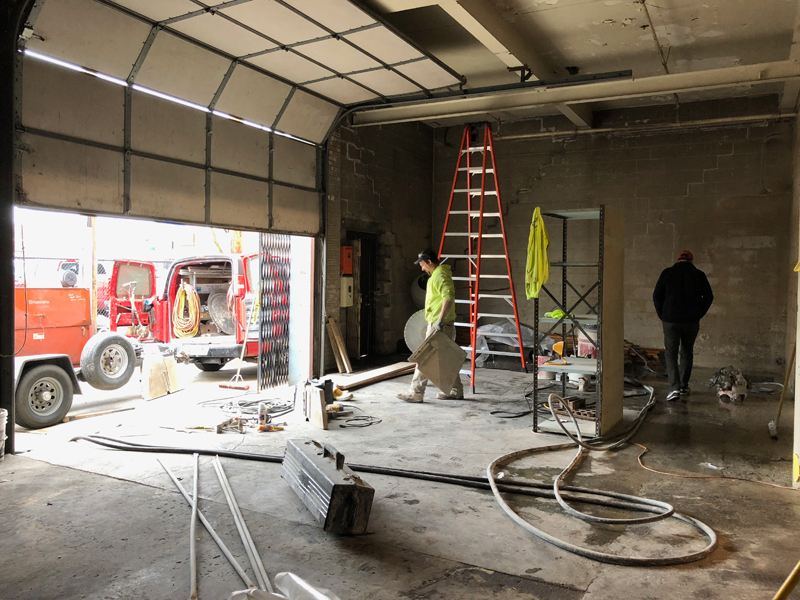 There is a small second-story but only in the front. Behind it, there is a clerestory like you’d see in a Gothic church. The fenestration is there but the 46 window openings are currently covered. Indeed will reopen those to bring light into the space, which has no windows on either side wall. 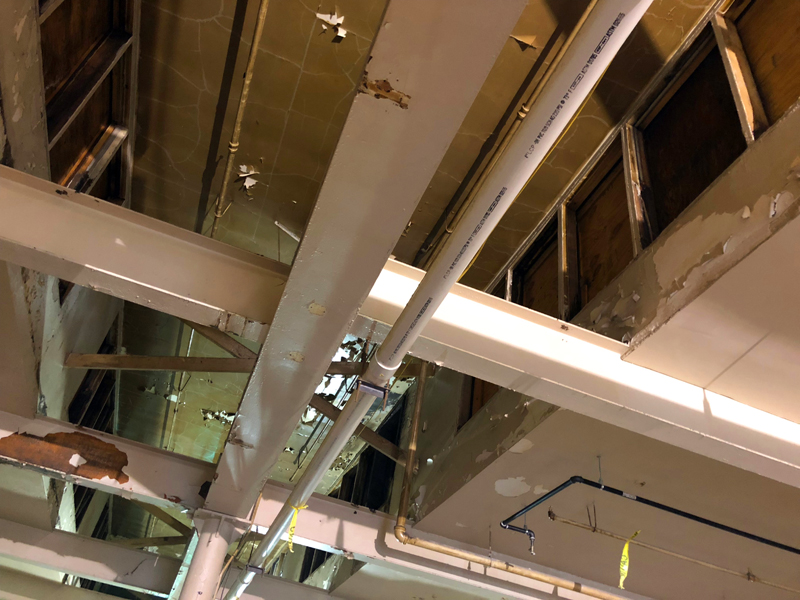 Because the building is built so solidly – Whisenand jokes that it must’ve been used for the Manhattan Project – there is the potential to add a roof deck, though that is not in the short-term plans.

Neither is a kitchen.

"There are a lot of good restaurants nearby," says Whisenand. "We talked to Fixture the other day, and nothing’s close or finalized, but they might deliver pizza over here. We might have other take-out options, or we might sell curds from Clock Shadow (Creamery, next door) or something like that. Snacks, but no kitchen."

Indeed hopes to open by mid-August, when the Minneapolis brewery celebrates its seventh birthday.

When it opens, there will be a few faces familiar to (and with) Brew City.

"(He) worked for Indeed in Minneapolis for two years early on and has been at New Belgium in Fort Collins (Colorado) as a brewer for the past three years," he adds. "He's relocating to Milwaukee."

Also moving to Milwaukee is lead brewer Patrick Nickelson, who has worked at Indeed for three years and has family ties here.

Whisenand says that Indeed is hiring in Milwaukee, but also relocating some employees.

"There are some people in Minneapolis that are interested in moving down here, which I think is really cool," he says. "It's interesting to see to some of our staff are interested in coming down here and I think it's a couple different things. Minneapolis is getting more and more expensive, and it's kind of starting to hit the ceiling, where Milwaukee feels like it is full of opportunity.

"It's a cool thing, and it's kind of a duality thing to for Indeed. We're built up and we're getting more structured. I don't want to say ‘corporate,’ but more organized, and this will be a little bit "wild west" for a little while; a kind of figure it out and get it done type mentality, so we're excited about that, as well."

Whisenand, whose girlfriend is from Milwaukee, has been spending a lot of time shuttling back and forth between the two cities lately.

"I've been really fortunate to be able to spend time here, and then go back. I've been going back and forth so much that I don't really know where I live right now (laughs)," he says.

"Minneapolis and Milwaukee are very complementary cities; there’s a strong connection. There's a lot of back and forth, and there's also a friendly rivalry between the two. I think it's something that we can kind of embrace and champion."