In search of the perfect pizza: Fixture Pizza Pub

Rick Rodriguez says he doesn't think he's ever written about a pizza place as new as Fixture Pizza Pub. In this installment of his pizza blog, he gives the lowdown on the space, the food and a few other interesting facts about the owners and offerings.

I don’t think I’ve ever written about a pizza place that was as new as Fixture Pizza Pub, which opened to the public on July 5 at 623 S. 2nd St.; but I attended their soft opening as a guest of a friend and was pleased with the food and service on that visit.

Some of the space was left empty for future use, but I walked around to explore a bit and ask questions, being the nosey blogger that I am. My friend introduced me to Jake Taylor, who co-owns Fixture with his brother Josh.

I asked my favorite question, "why pizza?" The answer was simply, "because who doesn’t love pizza?" Fair enough. I guess it’s the same reason OnMilwaukee gave me the green light on this idea for a blog.

Jake Taylor shared some of the ideas they have for the near and distant future, including in indoor bocce court. It likely won’t be regulation size for the available space, but I think it’s a better idea than putting in a video game. We have enough of those around town, don’t we?

I admired the design and décor and heard whispers that the work was done by Milwaukee’s 360 Designs, who were seated at the table behind me, so I walked over, interrupted them from the fun and relaxing time they were enjoying, and introduced myself. I put on my art and interior design expert face and asked what their inspiration was for the design. They totally bought it and actually answered my question.

They wanted to produce a classic look with a bit of industrial mixed in. The exposed brick walls and light fixtures hanging above the bar help with the industrial look, while the reclaimed wood from an old burned church and an impressive painting, by local artist Clive Promhows, combining colors that look faded with black and white images in the background help provide the classic look.

Booths and high top tables provide most of the seating and are supplemented by the stools along the bar. Speaking of the bar, there is a solid line-up of spirits, wine, craft beer and cocktails available, if you’re into that sort of thing.

As far as food goes, we did not experience a bad bite. We started with the garlic cheese bread and eggplant fries. Both were solid! The garlic bread was crisp and soft and topped with perfectly melted mozzarella cheese. The eggplant fries were very lightly dipped in batter, fried, and generously seasoned and served with a tasty marinara dipping sauce and lemon wedge. 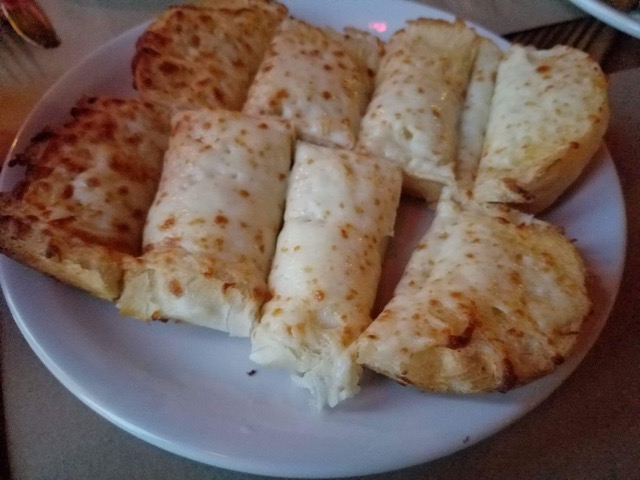 After a bit of a wait, our pizzas arrived and were timed to allow us time to enjoy each one fresh out of the oven.

We started with a thin crust topped with sausage, mushroom, and onions, the most popular pizza ordered in Milwaukee, according to many pizzerias I’ve visited. As soon as it arrived, I smiled. The sauce was placed over the cheese, something I’ve only seen done one other time. The Taylors grew up with a similar style pizza and wanted to offer it, while making some minor adjustments to the sauce and dough recipes to make them their own. 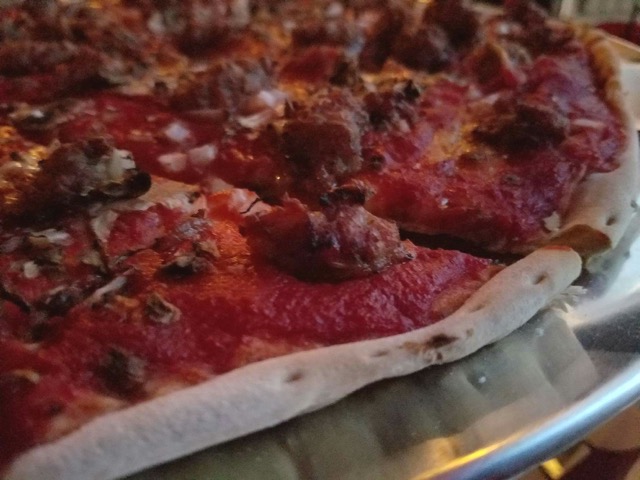 The sauce was a nice balance of sweet and spicy, with neither being a prominent taste. If I had to pick one, I think my taste buds would lean a bit toward the sweet side. The important thing to me was that it tasted good and there was plenty of it. Some of you who have been following this blog a while know I like enough sauce on a pizza that when I bite into a slice, it leaves sauce on both sides of my mouth. This pie provided that.

Finely diced onions, fresh mushrooms, and large chunks of slightly tangy and tender Italian sausage, from Chicago’s Greco &amp; Sons, rested on top of the sauce. The pizza was heavy from the sauce and toppings and each slice held up very well, barely flopping, if at all. The crust is made with pizza dough made from scratch in-house. Each rectangular cut slice featured an airy crust that was crisp and still strong enough to hold the toppings and sauce.

Next up was a sausage and pepperoni deep dish pizza. This time the cheese was over the sauce. The crust was at least an inch and a half thick, and the pizza was cut into pie slices. The crust didn’t have buttery texture that some Chicago style deep dishes have, but also wasn’t dry, like a few of the deep dish crusts I’ve had in town. 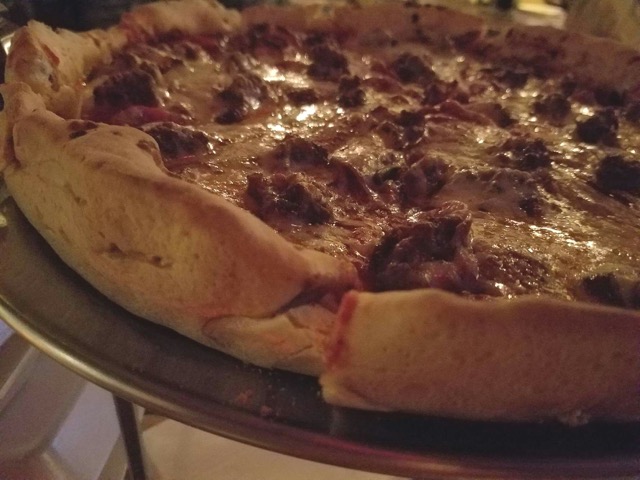 The pepperoni was slightly spicy, as was the sausage, and the crust was crisp with a softer, chewy center, and each slice held the heavy toppings strong. This was another solid pie, so thumbs up from me for the thin crust and the deep dish, which is pretty rare to find in the greater Milwaukee area.

The Taylors selected the name Fixture from a list of possible options because they liked the different ways it could be used, but primarily because they want to be a "fixture" in the neighborhood. Give that a minute to sink in, if you missed it.

An example of the neighborhood affinity can be found in the names of the nine specialty pizzas, which cost $16 to $22 and are named for Walkers Point businesses, with each business providing input on the toppings.

Sabbatic is a bar across the street and is also a pizza at Fixture topped with extra red sauce, pepperoni, and cream cheese. Another bar, Walker’s Pint, has a pizza topped with ground beef, taco sauce, cheddar, diced tomato, lettuce, green onion, sour cream, and crushed tortilla. The WP (Walkers Point) Tattoo pizza is topped with pepperoni, chicken, bacon, and pineapple.