In search of the perfect pizza: Scotty's Bar and Pizza

It's not often Rick Rodriguez writes about reader-selected spots. But the words "thin crust," "good pizza" and "small bar" were repeated by enough people that he felt a visit to Scotty's was warranted.

Since the readership of this pizza blog has grown to double digits, I’ve had one or two folks offer their suggestions of pizzas I should try. Most of them I’ve already written about, but once in a while, I’ll add a suggestion to my list, and sometimes I’ll be intrigued enough to check one out.

Such is the case with Scotty’s Bar and Pizza, 3921 S. Clement Ave. The key words "thin crust," "good pizza" and "small bar" were repeated by enough people that I felt a visit was warranted. I stopped in on a Saturday afternoon with a friend to find a full bar and an empty dining room. We grabbed a table and were soon greeted by Shay, a bartender who was playfully sassy and added fun to our dining experience. She was great!

Neither of the owners were there on my visit, but I was able to speak to Gary Tiedke by phone. He and longtime friend Marcie Rone bought Scotty’s Bar and Pizza 15 years ago. Tiedke owned a bar in the past and currently owns a tile company that his son manages. Tiedke said Scotty’s had such a great reputation, he felt it made sense to buy the business when it was for sale.

I peeked into the kitchen through the ordering window in the dining room and saw the two Blodgett ovens used to bake the pizzas that are made fresh. I was told that the pizza dough is made from scratch and delivered several times per week by Canfora Bakery, also located in Bay View. Canfora also makes the seeded French bread rolls that Scotty’s uses for its burgers. In fact, most of the pizza toppings are sourced from local businesses, including vegetables from Layton Fruit Market and the Italian sausage made specifically for Scotty’s by a local butcher.

There are two small dining rooms in the back and a game room adjacent to the bar. The walls are filled with old radios and other collectibles, such as clocks and metal signs representing gas stations, auto racing and classic cars. I literally enjoyed staring at the walls, while waiting for our pizzas.

Scotty’s pizza options do not include any specialty pies, but you can build your own medium or large thin-crust pizza using any of the 10 toppings available. Cheese pizzas start at $10.90 for the 13=inch and $14.90 for the 17-inch. Additional toppings are $1.25 and $1.50, respectively.

The rest of the menu features appetizers, burgers, sandwiches, soups, nachos, tacos, shrimp, scallops, spaghetti and Gary’s homemade lasagna. Each night features a different special, such as the Friday fish fry with cod or perch and homemade potato pancakes and their popular chicken fry on Saturdays and Sundays. Scotty’s Bar and Pizza also offers a children’s menu for kids 12 and under which includes a mini pizza, grilled cheese, chicken nuggets, hot dog, mac 'n' cheese and SpaghettiOs.

We ordered a sausage, mushroom and onion pizza as well as a pepperoni pizza, which arrived as a pepperoni and mushroom pizza. It wasn’t a deal breaker though, so we didn’t send it back. I’ll accept responsibility for that one for ordering it as "cheese and pepperoni" while not listing the cheese when I ordered the sausage, mushroom and onion. She likely thought I ordered a second topping that sounded like mushroom. I should have just said pepperoni; my bad. The important take away here is that Shay felt bad and discounted the pizza for us. 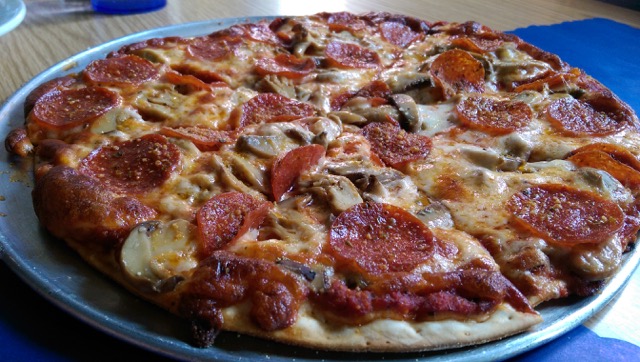 The crust on both pizzas was almost perfect for me, very thin with a crispy cracker texture and no cornmeal. Kudos to Canfora Bakery on the pizza dough they make for Scotty’s!

Both pies were topped with the same sauce, which I found to be a bit on the spicy side – the way I like it – and there was definitely the right amount of sauce applied. I had sauce all around my mouth after each bite! That’s what I’m talking about! Like most pizzerias, Scotty’s adds its own seasoning blend to a canned base.

Even though I’m not a fan of canned mushrooms, these were fine. The pepperoni was good. It was slightly spicy – I would not have minded a spicier pepperoni – but I liked it. The pizza was good, but I think it would have been better without the canned mushrooms. 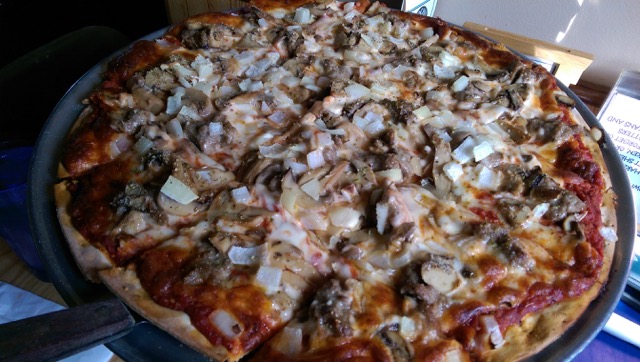 Despite the canned mushrooms, I enjoyed the pizza. The onions were diced thin, and the sausage was among the very best I’ve had on a pizza. The chunks of Italian sausage were large and tender, with a great flavor complemented by the mild taste of fennel seeds. The onions, canned mushrooms, sauce and Italian sausage all worked well together, but there is no doubt the sausage carried this pie.

After we finished, I looked over at the table next to us, envying those guests with the burgers on French bread and crinkle cut fries in the baskets. We had pizza left over, so there was no way I could eat a burger on that visit. If we had another diner or two with us, we would have ordered the chicken fry special, too. Do you see where I’m going with this?

I’m going back to Scotty’s Bar and Pizza to get one of those burgers on seeded French bread. Then I’m going to go back again and get the chicken fry, and probably a fish fry another time. You can also bet that I will be going back for a sausage and pepperoni pizza. I hope that Shay is the bartender. I hope she reads this and sees I poked a little fun about the pepperoni and mushroom pizza. Most importantly, I hope she is in the same fun and sassy mood to dish it right back at me!