Get ready for the best Sunday hot ham ever at Iron Grate BBQ Co.

Your Sunday morning tradition just got even better. Iron Grate BBQ Co. is launching a new Sunday morning offering: hot ham and Texas toast. And it promises to be some of the best you've ever had.

The Sunday tradition of ham and rolls in Milwaukee is about to get even better thanks to the launch of a new offering at Iron Grate BBQ Co., 4125 S. Howell Ave.

Beginning on Sunday, Dec. 17, the restaurant will offer hot ham and rolls Texas toast for pick-up between the hours of 8 and 11 a.m. And believe me when I say that this ham is gonna be worlds better than the warmed deli ham you can get at the grocery store deli. 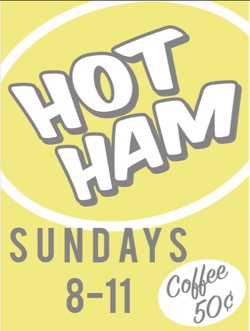 "This is really about offering something cool and unique that’s geared toward the neighborhood," says Iron Grate owner and chef Aaron Patin. "We want to continue doing things the right way, and doing things that no one else is taking the time to do."

Ham pick-up will take place at the carry-out window (and the big yellow sign) located adjacent to the Iron Grate BBQ Co. patio. The ham itself will be thinly sliced and sold for $14 per pound; and, rather than the more traditional rolls, it will be accompanied by Iron Grate’s signature Texas toast (which is perfect for building amazing ham sandwiches).

Piping hot Anodyne coffee will also be available for 50 cents per cup.

Patin says that Sunday hot ham is just the beginning of a series of more spontaneous specials that will be available at Iron Grate. In fact, he says he’s currently shopping around for a digital menu board that will allow him to more efficiently advertise those specials at the restaurant.

There's also still a few more days left to order your holiday ham from Iron Grate. They are offering 8 to 10 pound brined, hickory smoked hams that are primed and ready for reheating. Hams are $80 each and feed up to 15 people.

Hams can be ordered through Dec. 19 by calling (414) 455-1776 or emailing IronGrateBBQ@gmail.com. Hams will be available for pick-up during regular business hours on Dec. 21 and 22 (unless alternative arrangements are made).