Underneath all the makeup to create the famously deformed face of Sloth from "The Goonies" was an equally famous face, especially to those in Milwaukee: John "The Tooz" Matuszak, actor, two-time Super Bowl winner and Oak Creek native.

For many born in and around the ’80s (the dreaded M-word: millennials) "The Goonies" is a classic, with that line and the character behind it – Sloth, Chunk’s big and big-hearted pirate-inspired companion – essential to its iconic status. But underneath all the makeup to create that famously deformed face was an equally famous face, especially to those in Milwaukee: John "The Tooz" Matuszak, actor, two-time Super Bowl winner and Oak Creek native.

"The dude was every kid in Oak Creek’s hero," remembered Christian Kerhin, president and CEO of Attivo Technologies, who grew up in Oak Creek during the ’80s. "As a kid, he was just the epitome of machismo and sheer testosterone and presence. He would walk in, and you were just like, ‘Holy sh*t.’"

According to his 1987 autobiography, outstandingly titled "Cruisin’ with the Tooz!," it wasn’t always that way.

As Matuszak tells it, when his family moved from the Downtown area to Oak Creek, his classmates would make fun of his awkward "beanpole" size, inspiring him to bulk up and become an athlete. After a football stint at the University of Missouri was cut short by off-field issues, he eventually grew into a football star at the University of Tampa and was the number one draft pick by the Houston Oilers in 1973. He bounced around a few teams – Houston, then Kansas City, then Washington – before landing with the Oakland Raiders, playing defensive end and helping the team win Super Bowls XI in 1977 and XV in 1981.

"He was a great football player," said 620 WTMJ radio host Gene Mueller, who often chatted on-air with Matuszak as the morning show co-host on 94.5 WKTI. "He was a beast; he was a crazy man. I didn’t know if he was just getting in or just getting up, but that was life with ‘The Tooz.’" 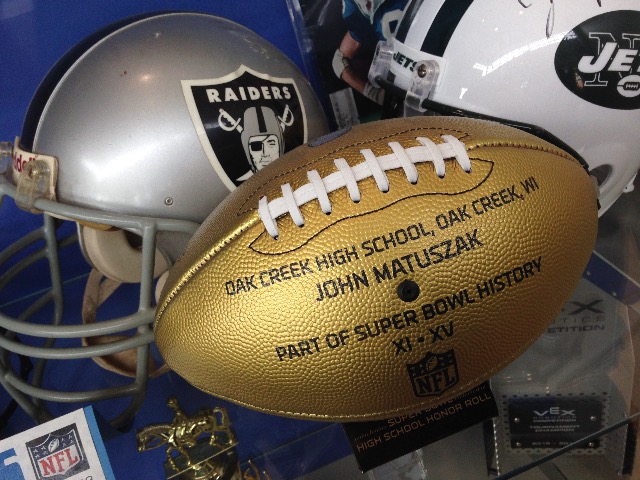 That "Tooz" reputation found a tenuous home with Oakland; according to a 1989 piece in the Los Angeles Times, a then 22-year-old front office worker was just one of those tasked with living with Matuszak and making sure he didn’t get in TOO much trouble.

Eventually it wore out, and he retired in 1983. By that time, though, he had already found a new home in Hollywood, trading out lines of scrimmage for lines of script. His first big role? A football player, naturally, in "North Dallas Forty" in 1979, where he delivered a heated rant to the team’s owner – complete with the fairly prescient line, "Every time I call it a game, you call it a business, and every time I call it a business, you call it a game." Matuszak would pop up a lot over the ’80s, both on the big screen ("The Ice Pirates," "One Crazy Summer") and small ("Miami Vice," "The Dukes of Hazzard").

"He was in the first or second scene (of a ‘M*A*S*H’ episode), and I looked upstairs and was like, ‘Whoa, Matuszak’s on TV!’ Nobody had any idea because obviously you didn’t have social media or all these other things," Kerhin recalled. "So I ran upstairs, got my brothers and all just hunkered down."

However, his most recognizable role came as Sloth in 1985’s "The Goonies" – though it’s also his most unrecognizable thanks to the layers of transformative, deforming makeup. In Kerhin’s case, he didn’t even realize it was his hometown hero while watching the movie.

"It was after the movie – I didn’t stay for the credits – that somebody was like that was John Matuszak, and I’m like, ‘No sh*t?’" he laughed.

Even though Matuszak left Wisconsin for the on-field and on-screen lights of California, he never truly left his roots behind. His family still lived in Oak Creek, so he came back to the Midwest often – Kerhin guesses about five or six times a year – hitting plenty of the local taverns and leaving behind plenty of stories.

For instance, Milwaukee bartender Paul Kennedy remembers an early ’80s Bucks playoff game on the televisions at Major Goolsby’s being aggressively interrupted by "The Tooz," who demanded the song that was playing when he first walked into the bar to be played again. Kennedy ended up creeping out before he was noticed and making his way to the East Side – and so apparently did "The Tooz."

"I ended up at my friend Dan's house, which was directly across the street from Wolski's … and we heard a commotion outside and noticed police lights," he remembered. "Looking out the window, we could see that the police had a sports car blocked off by squads on either side, and the car was going the wrong way down Pulaski Street. One of the occupants of the car jumped out of the passenger side and started screaming at the police. Guess who? It was ‘The Tooz’! Apparently I wasn't the only one having a good time after leaving Major Goolsby's."

WMSE station manager Tom Crawford recalled a time in the early ’80s, watching from a friend’s porch, when The Tooz got kicked out of Bay View Bowl and didn’t take the news lightly.

"He runs into the middle of the road, and he’s standing on the center line, stopping cars – getting into the huddle position and stopping cars," he shared. "Cars are honking at him; he’s kicking at the cars. One guy stops his car and goes, ‘Hey, what’s wrong with you?’ His girlfriend gets out and goes, ‘That’s John Matuszak; are you out of your mind?! Get back in the car!’ (Matuszak) starts running after the guy, who gets back into the car and takes off down KK."

According to Crawford, Matuszak eventually decided to head down the road and make his way to The White House – by foot, "walking the center line in the road, swinging at cars, south on KK and down the hill." Despite their curiosity, Crawford and his friends decided not to go to The White House to see what would happen next. 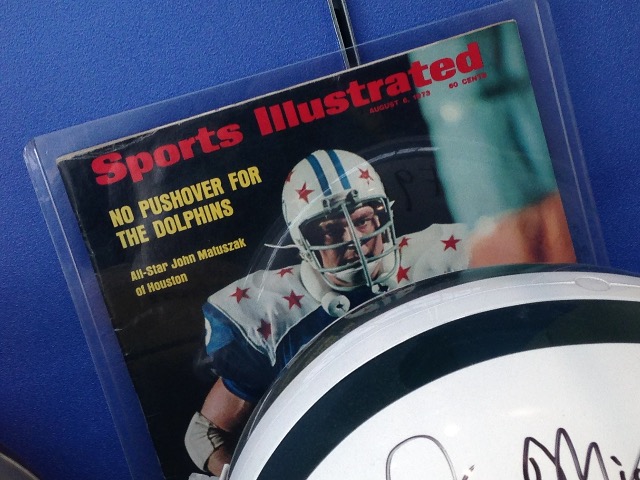 "The Tooz" on the cover of Sports Illustrated (PHOTO: Matt Mueller)

Kerhin remembers a slightly gentler version of Matuszak, who would drop by the American Legion Post 434 in Oak Creek, the town hot spot, to grab a drink during his visits back home. Though perhaps "gentler" isn’t quite the right word.

"Any time he was there, he got into a fight," Kerhin said emphatically. "It wasn’t like he was looking for a fight. It got around Oak Creek so fast that he was in town, hanging at the Legion Post, that dudes would come in and they would challenge the mountain. Every single time. And every single time, he’d be like, ‘Listen, there’s kids in the bar. If you wanna take it outside, that’s fine. Dick (the manager), keep the kids inside; they don’t need to see this.’ All I remember was them walking outside, and he’d walk back in less than a couple minutes later, and he’d be like, ‘Dick, just call the ambulance.’ I kind of felt bad for him in a sense." 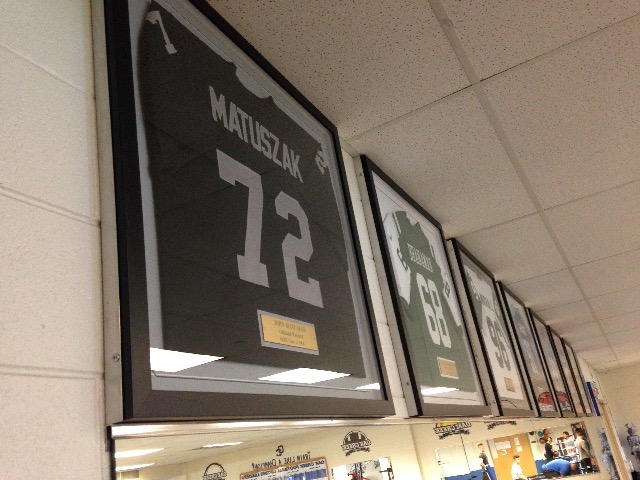 Though he wasn’t particularly generous to his challengers, Kerhin – who lived right across the street from the Legion Post on Shepard Avenue – remembers he was extremely generous to the Oak Creek kids who would go from house to house eagerly spreading word of his arrival, gathering to see their local hero (they were allowed in the bar at the time). After those fights, Kerhin said Matuszak would talk to the kids and sign autographs.

Sadly, despite several attempts at detoxing, Matuszak’s hard-living lifestyle would catch up to him, dying in Hollywood on June 17, 1989, of a massive heart failure brought on an accidental overdose of propoxyphene, a prescription drug. He was 38.

Just like in life, he returned home to Oak Creek, where he’s currently buried at Holy Sepulcher Cemetery – a site of pilgrimage for some local "Goonies" fans who, for the past four years, have met at Franky’s Newport, 939 E. Conway St., to journey to the star’s final resting place. They’ll do it again this August. Oak Creek High School also hangs his Raiders jersey on its weight room wall, as well as a football and an issue of Sports Illustrated with "The Tooz" on the cover. 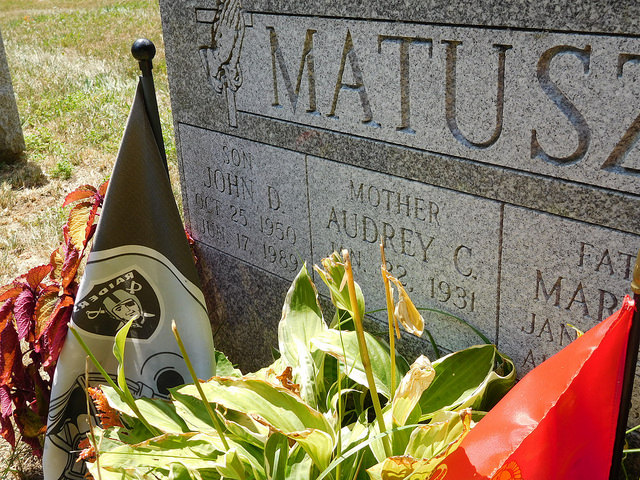 Matuszak left more behind than just stories as crazy as they are cherished. He left behind an impressive football career and an indelible cinematic creation – one that he doesn’t receive much credit for since his face is hidden but one that needed his outrageous big-hearted presence on screen just as much as it needed his outrageous burly brawn. He also left behind multiple charitable donations for Cystic Fibrosis, a disease that took the lives of two of his brothers and a sister.

After his tragic death, his legacy was plunged into sadness. "There has been some attempt to put a last gentle Hollywood glow on his life, to suggest he’d numbed himself out because of the pain of football injuries, but it’s sadder than that," wrote the LA Times, before outlining a life of insecurities, occasional violent tendencies and addictions. "The tragic real life of Sloth from ‘The Goonies’," says the headline from a Yahoo profile written just last year.

Many of those in Milwaukee and Oak Creek who remember Matuszak acknowledge the struggles that took him over, the unfortuantely human part of this almost mythical local legend. But they also remember so much more.

"To every boy growing up in Oak Creek in the late ’70s throughout the ‘80s, he was everybody’s hero; every kid wanted to grow up and be John Matuszak," Kerhin said. "They wanted to kick everybody’s ass, and they wanted to go bed with every single woman. And he embodied all of that and more. He may have had his own demons and his own proclivities, but it was all forgiven."

"He was always funny – very self-effacing and very modest," Mueller said. "He liked being a star, but he wasn’t A star."

Added Crawford, "When he walked in, everyone went (gasps) ‘The Tooz just walked in!’ And he looked around like, ‘Knock it off. Dudes, continue; carry on!’ That’s the way he acted.

"The one thing I loved and respected about him was that he partied working class. He didn’t party rock star. He partied like a working class guy who made it. Yeah, he became ‘The Tooz,’ but look where he chose to drink. He drank at Bay View Bowl, at Kneislers, at Nearly Normal. He drank at a corner bar in Oak Creek, because that’s the place where his dad drank. He had profound respect for his roots. I mean, at Kneislers, there he was with a shot and a beer. How Milwaukee, how southeastern Wisconsin and how Wisconsin is that?"