Milwaukee writer Jeanette Hurt's new book, "The Joy of Cider: All You Ever Wanted to Know About Drinking and Making Hard Cider" is part history, part how-to, part cocktail recipe book and part reportage on the current craft cider scene, and it's packed full of color photos, too.

With more than 900 cideries producing more than 1,600 brands of cider these days, cider – the kind with alcohol, that is – is experiencing a boom.
"The category did reach more than $500 million in retail sales last year," reported Beverage Daily, "already making its impact 10 times bigger today than it was 10 years ago."

Much of that cider is now made in Milwaukee, after MillerCoors moved all its cider production to the 10th Street Brewery in February.

But, still it seems to have something of an image problem. Milwaukee writer Jeanette Hurt’s new book, "The Joy of Cider: All You Ever Wanted to Know About Drinking and Making Hard Cider" – published by Skyhorse Publishing – may go a long way in setting the story straight. 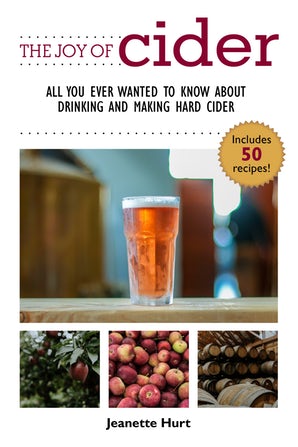 We caught up with the author to ask her about the world of cider and "The Joy of Cider."

OnMilwaukee: First off, I was struck by the discussion in the book of the term "cider beer," which I've never heard. Can you explain?

Jeanette Hurt: It's actually a thing. Or rather an imagined thing on the part of some consumers who don't know exactly what cider is. When I first started writing about cider, I interviewed Ambrosia Borowski, who manages the Northman cider bar in Chicago, and she told me that people come up to the bar all the time, asking to order "cider beer."

The thing is, despite its phenomenal growth, cider is still something people can't quite get their heads around. Is it a beer? Is it a wine? What is it?

People know what beer is, they know what wine is, and they know what hard liquor is, and within the last 10 years, all of a sudden, you're seeing this thing called cider. If you go into stores, it's often sold right next to the beers, it comes in cans, and you can order it on draft at bars. So, with those points of reference, some people think it's a type of beer – like an IPA or a stout – so they call it "cider beer."

People also often confuse cider with Redd's Apple Ale, which is a type of beer. Adding to the confusion, many modern cider makers create these unusual flavored ciders – Hidden Cave Cidery in Madison, for example, creates some really interesting flavors like hibiscus juniper, salted caramel and Cascade Hopped – just like craft brewers do. So that might also affect people's perceptions of cider.

But it's also not just the consumers. It's the professionals. I was recently at a local gastropub chain that has this amazing beer menu, and on their board, they listed The Mitten, from Michigan, as a beer on tap. The Mitten is a dry cider made by Virtue Cider. I think it was genuine confusion because they have a whole cider section on their menu.

And that's another thing – cider is often listed under the beer section of bar menus. There's nothing wrong with that, but that could also mix people up.
But cider is fermented fruit juice – like wine – not a brewed alcoholic product like beer. Actually, the only difference between hard cider and apple wine is the ABV.

What cider producers and cider aficionados are trying to do is to get cider recognized in its own category (under sales, it often falls under a category of beer so that also probably muddles things further). But to answer your question, yes, people do order "cider beer."

Is the cider boom still expanding or has it leveled out a bit now? Has the hard seltzer explosion cut into cider sales?

In some ways, sales have leveled out, but where cider is growing is in the smaller, craft producer segment. That's where the biggest growth of cider is occurring.

Local producers are growing their base by marketing cider as a locally made product. Local producers, across the country, usually (but not always), make their ciders with locally grown apples. Unless they own their own orchards, they usually use culinary apples, not cider apples, because that's what they can get their hands on at an affordable price, but a cider made in Wisconsin will be different from a cider made in Washington.

And that's important to note because when you're traveling, if you have the opportunity to taste local ciders, you should because a lot of these are just not distributed here, and our local ciders aren't distributed much beyond our state borders. And this is a little bit off topic, but cider has, for most of its history, been a local drink.

Since apple seeds do not grow up to be the exact replica of their parent trees, apples have changed and evolved to where they're grown, and that's one reason why cider became the drink of choice of the colonies - you could grow them practically everywhere, and the trees became unique to their regions.

I do think that hard seltzer may have impacted some casual drinkers of cider, but people who like good wine or enjoy a great craft beer, they'd be more likely to drink cider than hard seltzer.

What's the latest trend in ciders?

Rose ciders have been hot for a while – there's even a new category for judging them in the international cider competition. And cider spritzes – like wine spritzes – are growing in number and popularity.

Here in Wisconsin, I think the smaller producers are doing some really interesting things. Besides Hidden Cave, Upstream Cider does this wild fermented cider that's similar to a Spanish sidra, and it's crazy good. Gershon's does some really interesting ciders, and AeppelTreow has been making cider for practically forever, and then you've got Island Orchard barrel-aging ciders and creating some intriguing apple-related booze products. Restoration Cider has its own restaurant onsite. Here in Milwaukee, Lost Valley even makes their own canned ciders.

If we're looking more regionally, Virtue Cider of Michigan, is growing its presence, and its owner, Greg Hall, used to be the brewer at Goose Island. He is looking to expand to the West Coast, but he wants to get an orchard out there to make cider from his own orchard ... should be interesting to see what he does.

Do you have a favorite style or brand of cider?

That's like asking a parent who their favorite child is. I love so many different ciders, and while I love to support the littler gals and guys of cider, I do drink bigger producers.

Milwaukee has really become a major cider center in terms of production thanks to MillerCoors moving all of its cider production here. Do folks here and abroad know about this? And does that translate into popularity of cider in Milwaukee?

I don't think that's well known outside of here, and I do think this does translate to the popularity of cider in Milwaukee because you find it all around town. At the beer gardens in the summer, if you're not a beer drinker, and you really don't like the wine selection, their ciders are a fantastic option – and that's usually what I order when I head to the South Shore beer garden in summer.

Because of them, for example, you'll have the choice of not one, but two, ciders at the beer gardens, and while I'd love to see even more choices, two is a lot better than one, and they sometimes change the flavors they offer.

I also really think that for a larger producer, they put more care into their actual cider production. And, the sugar content is much lower than some of other national brands.