Kady Gibowski, executive chef at Cafe at the Plaza, is addicted to cake. She can dance a mean "worm," and she cooks up some of the best spaetzle in the city.

Kady Gibowski is addicted to cake. She’s also pretty well known for both her karaoke skills and her ability to successfully dance "the worm." Incidentally, she also cooks up a pretty mean breakfast spaetzle, which you can sample any morning of the week at Cafe at the Plaza.

Gibowski, who grew up about 40 minutes north of Milwaukee in the Village of Newburg, has both personality and charm. But, she also has a culinary pedigree which includes a degree from Le Cordon Bleu in Minneapolis. As part of her program there, she completed an internship at the Wisconsin Room at The American Club in Kohler. Subsequently, the worked at the LaFayette Club on Lake Minnetonka and the Ozaukee Country Club, where she began as a pantry cook and moved up to executive sous chef.

"At that point, I felt ready," she says. "I wanted to have my own kitchen." So, in March of 2014 she accepted the position as executive chef at Cafe at the Plaza, where she serves up breakfast and lunch – as well as dinner service on Thursday through Saturday evenings.

When Gibowski isn’t cooking, she loves to attend festivals and concerts. She says she loves anything outdoors with food and entertainment. She also spends lots of time with her 3-year-old nephew.

OnMilwaukee: What initially sparked your interest in food?

Kady Gibowski: My mom and dad are just great cooks, and I was always right there with them, (even if) it was making a boxed cake.  Once I was old enough to experiment, my parents would come home to find me in the kitchen, creating new recipes. Food has always been a huge event in my family; everything centered around food.

OnMilwaukee: When did you know you wanted to do it professionally?

Gibowski: Probably when I was in eighth grade.  We did a project for social studies where I had to study a country and make a food from that country, and I realized that I was super passionate about the research, and that made me realize I should just do it.

I worked at No No’s (in Newburg) all through high school – dishwasher, hostess, busser, server, cook.  By the end I was more or less running the line. The owner was super supportive. She wanted me to go to culinary school, and even though I was young she really gave me a chance.

OnMilwaukee: Cafe at the Plaza has been serving dinner since June. How has the transition been –  from serving only breakfast and lunch – to offering dinner too?

Gibowski: To be honest, I was a bit skeptical of the change at first because we’re so well-known for breakfast and brunch. I was also really excited to have a morning schedule. But, I did miss the creativity that I used to have when I created evening menu items.

The reception has been great. We get a lot of neighborhood people who come in and then go out and tell their friends about the experience.  So, we get more and more new and repeat customers all the time.

OnMilwaukee: And it sounds like there’s been quite a bit of renovation at the Cafe, as well?

Gibowski: Yeah, the kitchen has been renovated, including the installation of a new hood. The last assembly was from the 1950s, so it was overdue.

We’re currently working on creating an event space at the hotel, which will have a bar and multiple amenities for meetings and parties.  We’ll also be rolling out a banquet menu in the upcoming months.  We’re also renovating the prep kitchen downstairs, and that’s really going to be a great help in improving efficiencies overall.

OnMilwaukee: What's your favorite thing on the menu right now?

Gibowski: I have to say the pork and spaetzle because, well I have a German background. Spaetzle is something I made at the country club, switching it up to accompany veal and other dishes. It was such a big favorite. I contemplated how to turn it into breakfast – and that worked out well. You just add bacon and eggs, and voila!

Someone was visiting from Germany and inquired about the "spaetzle for breakfast;" he seemed so surprised, but was delighted with it. That was just the biggest compliment I could ask for. 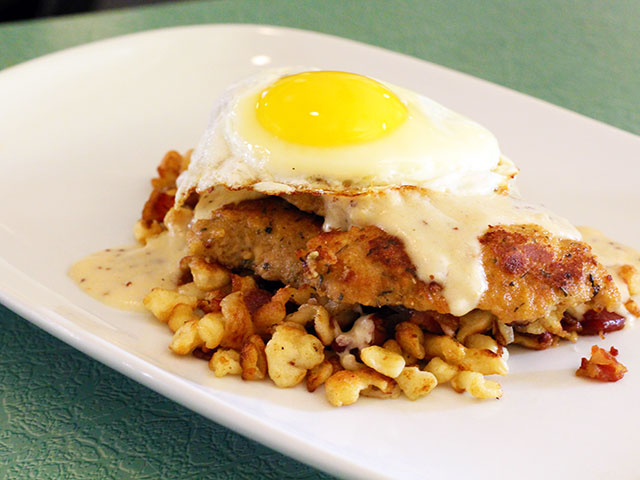 
OnMilwaukee: Do you have a signature dish?

Gibowski: I don’t think I do. I do have a couple of cuisines I love to cook. Anything Mexican is my favorite; it’s my favorite thing to eat, so I love to cook it.  I also love the super fresh flavors of Mediterranean food – the citrus, the fresh vegetables and fish. I love the brightness of the cuisine.

OnMilwaukee: Do you have any favorite places to eat out in Milwaukee?

Gibowski: Oh, yeah. When my boyfriend and I go out, we tend to keep it pretty casual, saving finer dining more for special occasions.  Some of my favorites are Vanguard, Cafe Lulu and Conejito's – love their mole. We did just eat at Morel last week, and it was fabulous.

OnMilwaukee: What's your overall impression of the Milwaukee scene?

Gibowski: I think we’ve had a reputation for being a little bit slow to come into the trends. Compared to Minneapolis, for example, they’re considered to be a really food forward city. I think we’re just getting there, maybe in the past couple of years.  And I think that’s changing. People are coming up from Chicago and seeing what we have. We’re really "in it" now.

OnMilwaukee: Who are the chefs who've been most influential in your career?

Gibowski: I would have to say that Chef Darwin from the country club was really hugely influential; he really helped mold me into who I am today.  He really influenced the management end of how I work. He was persistent and consistent in the processes he used; and he drove that home to me, since I was supervising the rest of the staff. He also helped to teach me the numbers side of things, inventory, all the behind the scenes chef stuff that no one really thinks about, but that we all have to do.

On the celebrity side, I really really respect Rick Bayless. As I said, I love Mexican food, and I ate at Frontera Grill … probably one of the highlights of my dining experiences.

I also secretly love Chris Kimball on "America’s Test Kitchen." He’s so nerdy, but so intelligent. And he doesn’t screw things up because it’s scientifically tested. I actually really hope I can see him when he’s in Milwaukee in November.

OnMilwaukee: Do you have a favorite cookbook? What do you like about it?

I would have to say the "America’s Test Kitchen" book(s). I also absolutely love "The Flavor Bible." It’s just great for inspiration. If you have an ingredient and you don’t know quite where to go with it, it’s a great reference. And I’ve never tried a flavor combination from it that didn’t work. Love it.

OnMilwaukee: What would you consider the biggest development in the culinary arts over the past 10 years?

Gibowski: I think the most obvious is the local food movement. And I’m really happy that it’s been brought to light in the past ten years because it’s healthier for everyone. I’m happy that it’s becoming simply an expectation that that’s how restaurants operate. I can’t really think of many places I go that doesn’t really use local products.

Post-molecular gastronomy, we’re also getting back to the basics. And that’s exciting for me because it’s not really something that I’m excited about or am going to pursue. I like simple, basic, down home cooking.

OnMilwaukee: What kitchen utensil can't you live without?

Gibowski: I don’t know if this is really a utensil; but the Vitamix is huge. I do so many sauces, soups and purees, and I don’t know what I’d do without it.  A secret: we actually make our hollandaise in it, and it works like a charm. We go through so much here; I’m never going back to the old way again.

OnMilwaukee: What is your favorite guilty dining pleasure?

Gibowski: I have a horrible, horrible sweet tooth. I’m talking bad.  My nickname is Cakey because I love cake. And I’ll eat it in any form, whether it’s from Pick 'n Save or something better from a place like Classy Girl Cupcakes.  I’ll even eat Little Debbies if they’re available.

OnMilwaukee: If you could cook for anyone in the world, who would it be? And what would you serve?

Gibowski: I would have to say Anthony Bourdain because he is real and he’s not going to sugar-coat anything. So, it would be a really good test to see how good I really am. I also think he’s really cool, and I’d love to hang out with him.  He has an amazing repertoire; he’s been everywhere and tasted   I’m pretty sure he would like my spaetzle.