Someday, Timothy Matthew Flores would love to be the first Asian American to play Evan Hansen on Broadway, but currently, he is thrilled with his role as Prince Chulalongkorn in "The King & I."

Someday, Timothy Matthew Flores would love to be the first Asian-American to play Evan Hansen on Broadway, but currently, he is thrilled with his role as Prince Chulalongkorn in "The King & I." 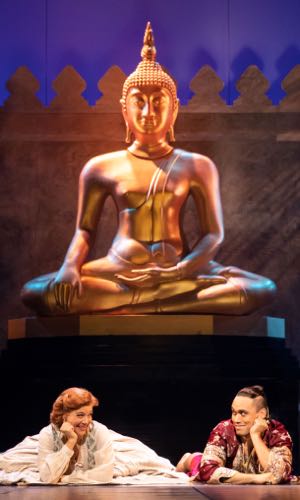 Rodgers & Hammerstein’s "The King & I" is set in Bangkok in the 1860s and tells the unconventional and tempestuous love relationship that develops between the King of Siam and Anna Leonowens, a British schoolteacher whom the King brings to Siam to teach his multiple wives and children. The Tony Award-winning show features classic pieces such as "Getting To Know You," "I Whistle a Happy Tune," "Hello Young Lovers," "Shall We Dance" and "Something Wonderful."

To prepare for the role, Flores says it took a challenging amount of physical and mental effort. "Eating right, exercising and getting a lot of sleep are just as important as doing rigorous amounts of research to stay true to the character. I feel particularly committed to portraying this person as he was because he was a real person and he deserves as much respect and authenticity as I can give."

Flores says portraying the character of Prince Chulalongkorn has helped the 20-year-old learn more about himself.

"I like the character’s sense of confidence and I think that we have a lot of differences that bring out things in me that I never knew I had," says Flores. "I really love his character development throughout the show and how he reminds us that people can change through time."

This is Flores’ first professional tour and it will last five months. After the tour, Flores, who was born in Brooklyn, New York, will return to Mount Mary Manhattan College where he is a sophomore.

"I’ve always wanted this. I could sing before I could talk," says Flores, who started performing at the age of 7.

Flores says he looks forward to visiting Milwaukee because he’s already been informed of our great food offerings.

"I am really enjoying being on tour because I get to see different places and things in the nation that I never even knew existed," says Flores. "My number one thing to explore in a new place is the food – something I heard Milwaukee has a lot of. And that’s the best thing ever."