Capitol Court shopping center opened in 1956 at the intersection of Capitol Drive, 60th Street and Fond du Lac Avenue. But when you ask people what they remember about it, they rarely talk about the stores. They'll talk to you at great length about the Kooky Cooky House.

Editor's note: According to Gino Salomone, the man who saved what remains of the original Kooky Cooky House, the nostalgic Milwaukee holiday attraction will be displayed outside Cedarburg City Hall this season. In preparation, enjoy this history of the attraction built for Capitol Court shopping center, which originally ran on Nov. 24, 2016. And while you’re at it, check out this illustrated look at the early days of Capitol Court.

Capitol Court shopping center opened in 1956 at the intersection of Capitol Drive, 60th Street and Fond du Lac Avenue. But when you ask people what they remember about Capitol Court, they rarely talk about the stores.

They’ll talk to you at great length about the petting zoo, the Kiddie Land amusement park, the Christmas train and the legendary Kooky Cooky House. 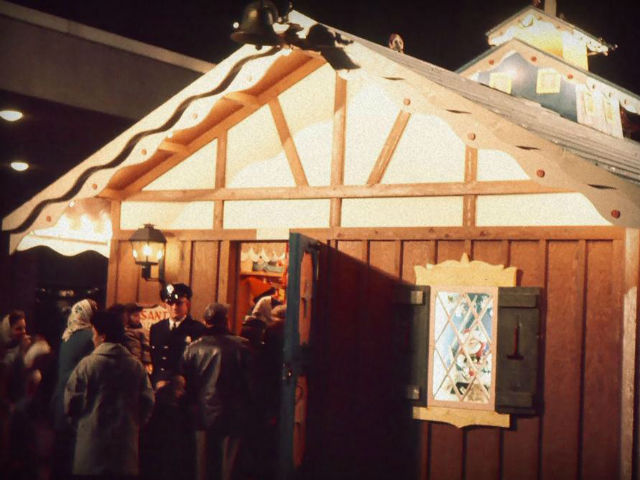 While a square-headed metal Boss Robot manned the Looneyvac Control Panel, visitors were treated to zany sights and sounds straight out of a Rube Goldberg cartoon. Life-sized gingerbread men, wearing chef hats and aprons, stirred cookie dough in gigantic mixing bowls. On a magical conveyor belt, sheets of dough were pounded by boxing gloves and stamped into gingerbread man shapes before entering a massive oven. On the other side, Tonka trucks delivered freshly-baked cookies to Santa and "Dusseldorf the Delightful Dwarf," who handed them out to children. 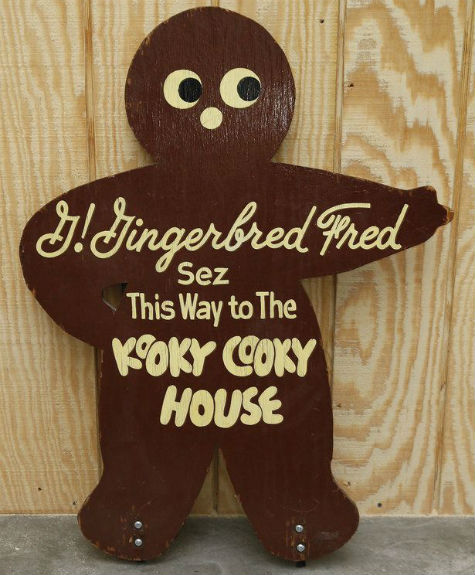 The house, designed by a group of clever Capitol Court carpenters for the shopping center’s manager, opened in 1960. Seven days a week, visitors waited in long, cold, outdoor lines to see inside the house, often until 9 or 10 o’clock at night.

Milwaukee’s original Candy Cane Lane filled the center court with elaborate lighting and giant wooden candy canes on oversized toy blocks. People came from miles around to see the annual lighting ceremony at Gimbels, where "Wisconsin’s largest Christmas tree" was illuminated with over 10,000 lights that were visible over a mile away. Candy canes, jingle bells, hot cocoa and coloring books were often given out free to families. Today, some of those coloring books can still be found on eBay, selling at collectible prices. Over 100,000 cookies were given away every Christmas season. 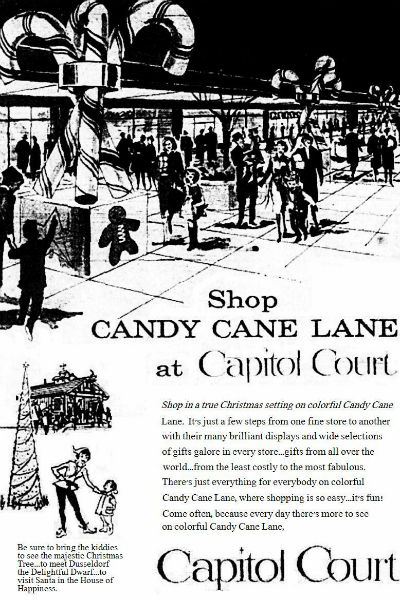 Although Capitol Court was the other side of the universe for my Oak Creek grandparents, they wouldn’t miss Christmas at Capitol Court for the world. "It wouldn’t feel like Christmas without it," my grandmother says, even now. 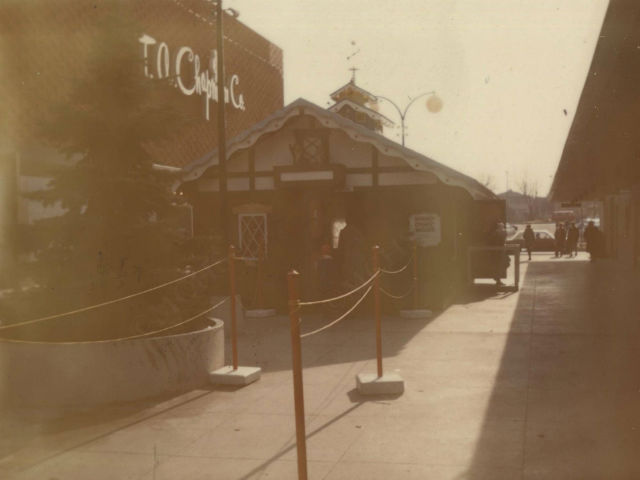 Unfortunately, many of Capitol Court’s outdoor traditions were retired after a 1978 remodeling that enclosed and modernized the mall. The legendary Christmas tree – actually an iron framework covered in pine boughs – was dismantled and discarded. The Kooky Cooky House went into storage, where it would suffer three decades of neglect and decay. Boss Robot spent his final years being batted around in the Capitol Court break room. The cookie oven was eventually donated to Pius XI High School. Despite a veteran employee’s best efforts to protect the House, most of the other pieces eventually disappeared. By 2001, only the walls and roof remained.

When Capitol Court was demolished, Milwaukee radio producer Gino Salomone rescued the surviving pieces of the Kooky Cooky House. They were transported first to the Kallas Honey Farm in 2001 and later to the Milwaukee County Zoo in 2003. Hoping to reconstruct the house as a zoo attraction, Salomone studied photographs and film footage. In the meantime, the remains were accidentally moved to an outdoor location, exposed to extreme weather and damaged beyond repair.

Nothing could discourage his efforts to recreate the magical experience. On Saturday, Dec. 13, 2008, Salomone, along with WKLH radio personalities Dave and Carole and comedian John McGivern, recreated the Kooky Cooky House at a Riverside Theater charity benefit show. 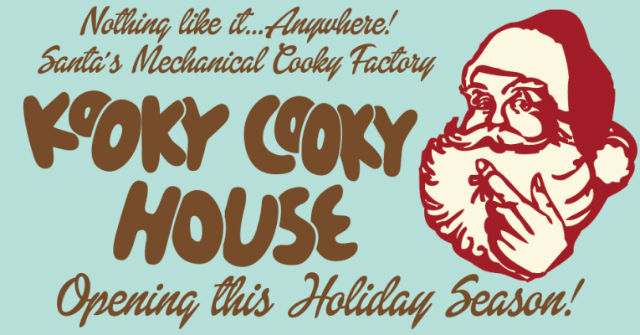 Unbelievably, surviving pieces of the original house turned up in 2012, and the Hartford Area Chamber of Commerce incorporated them into a holiday exhibit that now attracts over 3,000 annual visitors.

Meanwhile, Gino Salomone worked with Discovery World to recreate the Kooky Cooky House as an indoor exhibit. Using only archival films, diagrams and photos, the 16’x24’ cottage was completely reconstructed with modern precision. If you watch the rare video footage of the house, you’ll understand why this was such a tremendous undertaking.

The new house, decorated with vintage toys of the 1960s and 1970s, opened to rave reviews on Nov. 28, 2014. Nostalgic Baby Boomers who visited the Kooky Cooky House as children are now introducing their grandchildren to this tradition.

"The Kooky Cooky House has been extremely popular since opening at Discovery World," said Paul Fladten, public relations manager for Discovery World. "We’ve seen more than 40,000 visitors tour the iconic cookie factory over the past two years – including more than 20,000 guests in 2014 and almost 22,000 more attendees in 2015." 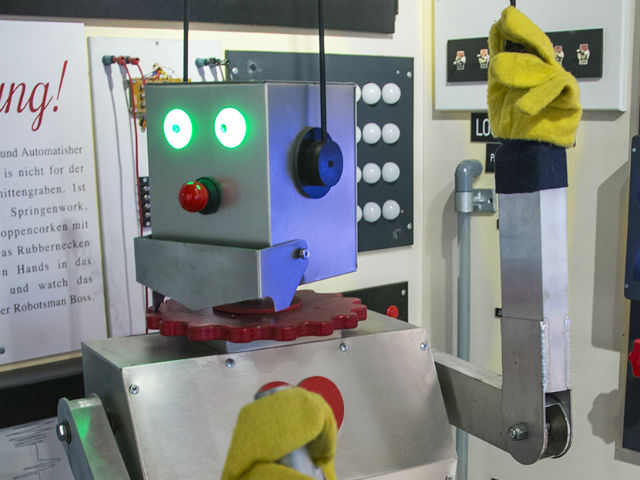 Some things never change: All guests still receive a free gingerbread cookie, courtesy of Bartolotta Restaurants. But since it’s the 21st century, the Kooky Cooky House has its own website and is also active on Facebook and Twitter.

"We’ve had numerous grandparents visit with their families and tell us about the sense of nostalgia they feel," said Fladten. "For us, the holiday attraction has been one of the few exhibits that brings extended families to our museum together each and every holiday season."

"The Kooky Cooky House appeals to younger generations because it is fun, it celebrates a magical time of the year, and because it is so different than anything else you see during the holiday season."

After so many Milwaukee holiday traditions have vanished, it’s truly remarkable that the Kooky Cooky House is still with us today. It’s really a strong statement about what happens when the right people in Milwaukee believe in a cause, no matter how lost that cause might have seemed at the time.

"This year, we hope to see 25,000 people walk through the Kooky Cooky House," said Fladten.  "After all, who wouldn’t want to visit a robot creating cookies in a magical workshop filled with vintage toys?" 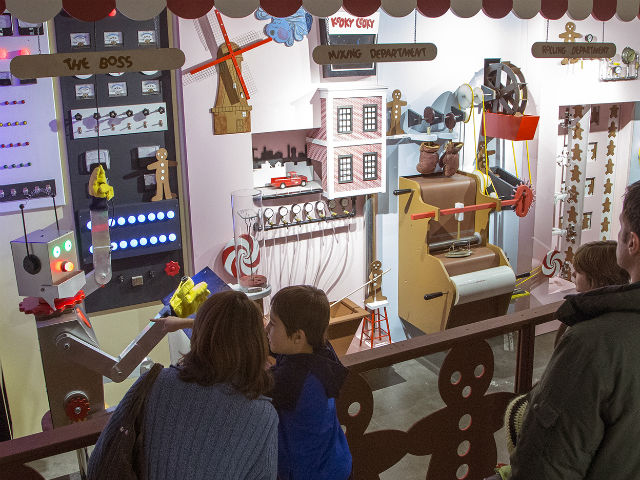