Today, a neighbor of Lake Park on Milwaukee's East Side launched a web site focused on the threatened Ferry & Clas bridge that spans Ravine Road in the park.

Today, a neighbor of Lake Park on Milwaukee’s East Side launched a web site focused on the threatened Ferry & Clas bridge that spans Ravine Road in the park.

The pedestrian bridge and the road below were closed in 2014 after inspectors discovered cracks in the concrete span and soil erosion around the bridge’s supports. Although the bridge was later reopened to foot traffic, it is once again closed while the county considers options for repairing or replacing the bridge, which was designed by Milwaukee architects George Ferry and Alfred Clas, and opened in 1905.

"I have no professional connections to the bridge, or to Lake Park," says site creator Rebecca Silber, who works as a graphic designer.

"My only connections are personal – as a neighbor, and as an artist who appreciates historic buildings and structures. This website is completely neutral, and meant to be used as a resource – that was my true intention in creating it. I wanted to get information out there, to those who may not have information about the Ravine Road Bridge."

Silber's web site contains history, news and photographs of the bridge, links to articles on other sites, and a "Get Involved" section with links to local legislators. 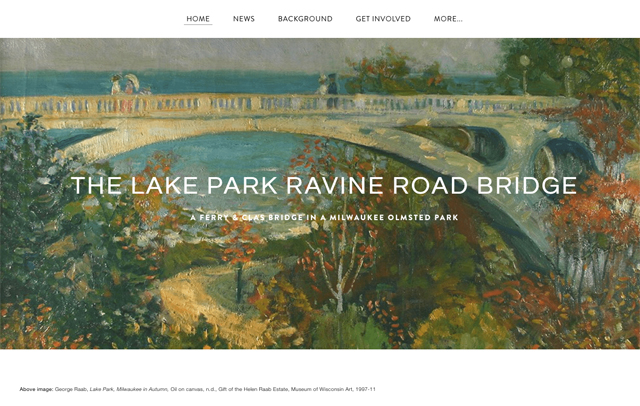 Silber said she created the site when she realized how many questions she herself had about the bridge and its closing.

Some of the options for the future of the bridge include repairing the existing structure, or building a new bridge in a similar style. Silber, like most, has a preference.

"My personal hopes are that the current bridge can be preserved. I would be extremely sad if the bridge was destroyed," she says. "Its design and engineering is historically significant and it’s believed to be one of the only bridges on which the renowned Milwaukee architects collaborated.

"I really am new to this whole bridge situation, we moved over here in October 2015. And then the bridge was fenced off and closed and that got my attention. I am certainly not the only person who was unaware of the goings on surrounding the bridge. My hope is that more people become aware of the bridge’s status."