Leon's wasn't the first custard stand, but it was one of the most influential

Leon Schneider wasn't the first to open a custard stand in Milwaukee, but he was one of the most influential. Even today, nearly a quarter century after Schneider's death, his Leon's drive-in on South 27th Street is a draw for locals and Milwaukee visitors alike.

Enjoy this excerpt from the book, "Milwaukee Frozen Custard," written by Kathleen McCann and OnMilwaukee's own Bobby Tanzilo:

Leon Schneider wasn’t the first to open a custard stand in Milwaukee, but he was one of the most influential. Even today, nearly a quarter century after Schneider’s death, his Leon’s drive-in on South 27th Street is a draw for locals and Milwaukee visitors alike.

Schneider was born in St. Paul, Minnesota, but his father, Joseph, was a tradesman whose work forced the family to move often during the Depression. Landing in Milwaukee, Leon attended Boys Tech High School.

"When Paul Gilles opened [Gilles Frozen Custard] in 1938, my father was his night manager," recalled his son Ron Schneider, who took over operation of Leon’s when Leon retired. 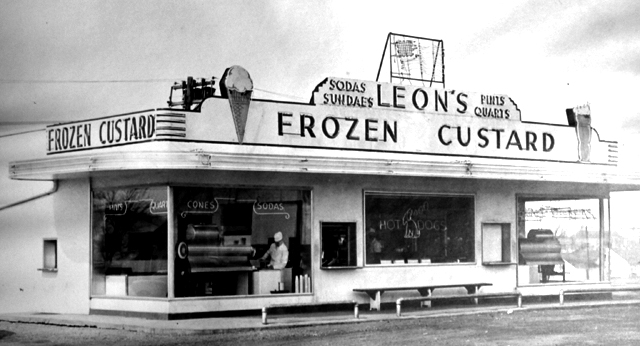 "My father had a day job; he was a cookie salesman. I think he worked for National Baking. After that, he ended up traveling with a carnival, selling frozen custard out of a concession trailer. I think he did that for two seasons. Their circuit was from the Gulf Coast to the Canadian border and then back. They did that twice a season. They’d play a fair, and then they’d move on to the next one and the next one."

Leon’s Frozen Custard opened on May 1, 1942, in a 30-by-20-foot building that was expanded in 1946. In 1955, it was augmented with the canopy and fluorescent lighting that you can still see today at the drive-in, which hasn’t changed in any marked way since then.

"He lived in Wauwatosa. He chose 27th Street because it’s U.S. 41 – it’s the highway. You’re coming and going to Milwaukee, and 41 is the way you went. He figured he needed the traffic. That’s still true today. You’ve got to be where people can find you. It’s impulse buyers. Traffic is exactly what you want."

Leon kept things simple, starting out with vanilla frozen custard, adding chocolate in 1948 and butter pecan four years later. These are the only three flavors that are regularly served (a fourth rotating flavor is added on weekends).

"When he opened the store here, his dream was [to] take home 200 bucks a week," said Schneider. "That was his dream. He never dreamed it would become as successful as it did." 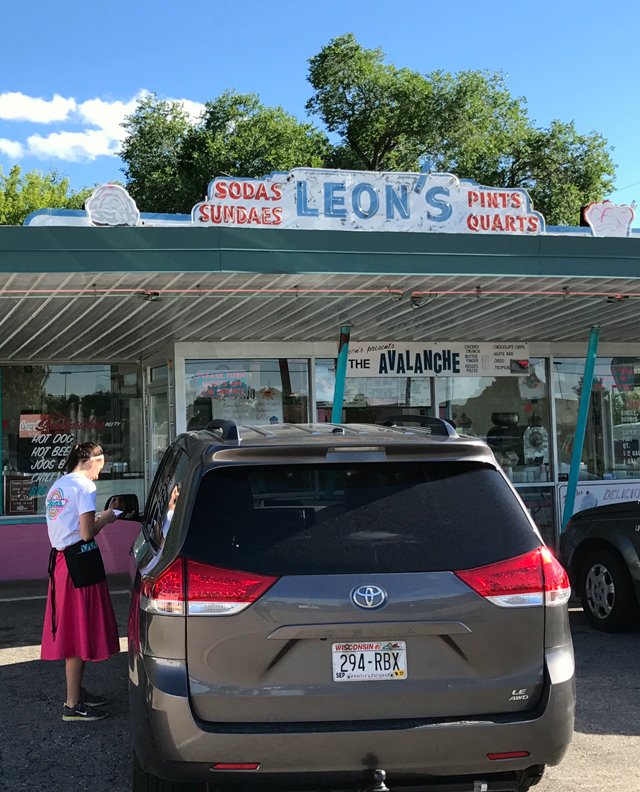 In 1947, Schneider gave his mother, Anna (Duex) Schneider, permission to open a Leon’s Frozen Custard in Oshkosh (pictured above) with his brother Jack, an arrangement that decades later would lead to a trademark infringement lawsuit. But for many years, the two locations looked similar, used nearly identical machines, bought the same mix from the same supplier, used the same bags and had employees wear the same hats.

In the late 1940s, Leon opened another Milwaukee store, at Oklahoma and Clement Avenues in Bay View (which became Park Frozen Custard, 1122 West Oklahoma Avenue), that lasted but a few years. He also had a stand in Sheboygan, at Calumet Drive and North Avenue, and another at 2929 Roosevelt Road in Kenosha (now a drive-in called Andy’s, pictured below). Leon even opened a Leon’s right across the street from the original Leon’s on 27th Street to help accommodate the brisk demand.

"His initial dream was to have Leon’s Frozen Custard located the complete length of Highway 41, from northern Wisconsin all the way down to Miami," said Schneider. "We had five stores years ago. Trouble is, my dad found instead of running a custard stand, he was running a shuttle service to make sure all the stores had employees." 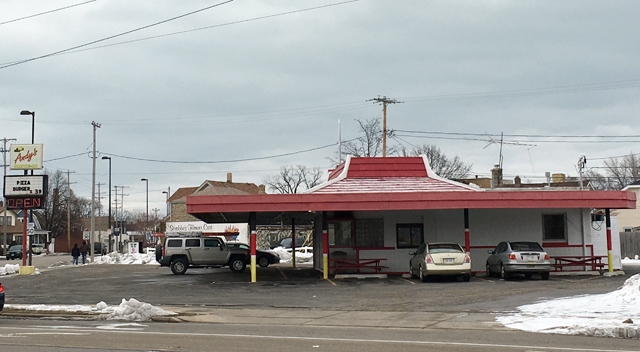 Much like the owners of the groundbreaking Kohr’s company in Pennsylvania, Leon and his son have been eager to help prospective drive-in operators get up and running, presumably in the hopes of selling them machines. Among those Leon helped was Elsa Kopp of Kopp’s, the founders of Trudy’s and the Town Pride stands and Al Lach of Al’s. When a permit was pulled to build the Kitt's Frozen Custard stand on Capitol Drive in 1952, Schneider's name appeared on it.

"People [wanting to open a stand] would ask for help, and he’d help them," Schneider told Agri-View.com. "He’d be hired to scout a location and he designed the building and equipment and trained management."

But it wasn’t always just business, according to Karl Kopp, Elsa Kopp’s son and owner of Kopp’s.

"Leon Schneider was just a saint," he said. "He was just a churchgoing, good man. He would help you do this and do that. The other thing that he did, that probably a lot of people don’t know, is … my dad was sick [with Parkinson’s disease]. Nobody could help him. Leon said, ‘I know a doctor in Iowa. Maybe he can help. He’s a really good doctor.’ Me, my sister, my dad and Leon all piled in Leon’s car and we drove to Iowa."

Today, Schneider said he is willing to train potential competitors in how to run a successful custard stand.

"I offer two weeks of training here in the store, for two people. I say, ‘You come down here, and you’re going to start at the bottom and learn exactly the way we do it, just like we train an employee. Then, as we go along, you can ask me questions, take notes. When you’re done, you should be able to move into your store and open up. Then, once you’ve been trained, if you call me with a problem on the phone, I can help you on the phone."

Some believe that this assistance, which mirrors similar help provided by other custard stand owners in Milwaukee, is part of why frozen custard has become such an ingrained tradition in the city.

"[Leon] would welcome the competition," said Schneider. "He felt that the more people who did a good job with the product, the more the product would become known. This would help us. A bad store down the block does us no good, because if that’s the first place the customer stops to try frozen custard, [and he] eats lousy product, when he’s driving by here, he’s not going to stop."

Despite periodic rumors that Leon’s is closing – so strong in 1994 that the daily newspaper ran a front-page story debunking the idea – Leon’s stands strong. And even on a winter’s day, folks belly up to the window to order frozen custard.

What’s the secret to Leon’s success?

"We never strayed from our original premise, which is sell frozen custard … and do it as well as we can," Schneider told the Milwaukee Journal in 1991. "That’s our focus."

The authors of "Milwaukee Frozen Custard" will do a book talk on Thursday, Oct. 19 at 7 p.m. at Historic Milwaukee, 235 E. Michigan St. Details can be found here.