You may recognize some of these "little landmarks," while others may seem less familiar, but I bet they'll help jolt your memory into thinking about some of your favorite places that might not qualify as full-on Milwaukee landmarks, but are definitely notable places in town.

A while back, I posted an illustrated collection of some of the "little landmarks" I enjoy most in Milwaukee. That list led to requests for more. Next, I discussed these posts with Nate Imig at Radio Milwaukee, which led to still more requests.

So here are six more little Milwaukee landmarks – according to me. You may recognize some of them, while others may not seem as familiar, but I'm guessing they'll help jolt your memory into thinking about some of your favorite places that might not qualify as full-on Milwaukee landmarks, but are definitely notable places in town.

In no particular order... 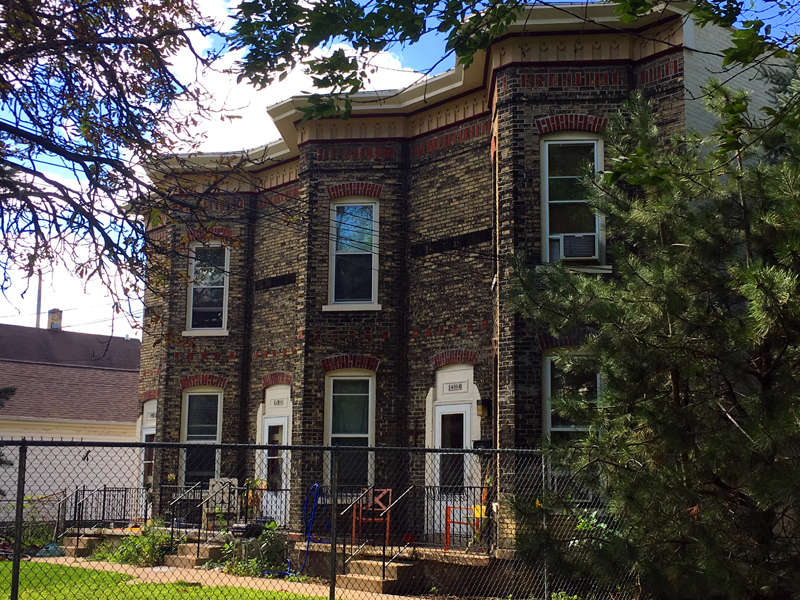 This row of brick townhouses in the shadow of the Allen-Bradley Clocktower on the near South Side has always piqued my curiosity because it is in a backyard behind a pair of wood frame houses, the back running along the alley. I've been unable to find architects for the front houses in this tract, but the row houses were designed by Andrew Elleson and were built in 1883. The first frame house (the one to the north, 1409 S. 3rd St.) went up in 1889 and the one that's now called 1411 S. 3rd St. followed two years later. All were built (perhaps as investment properties because it's not clear he lived in any of them) by George G. Campbell, hence the name, Campbell Row. In addition to registering numerous patents for things like early diving equipment, Campbell's Oregon Street foundry (Gardiner Campbell & Sons -- George was one of the sons) made the bell for City Hall. 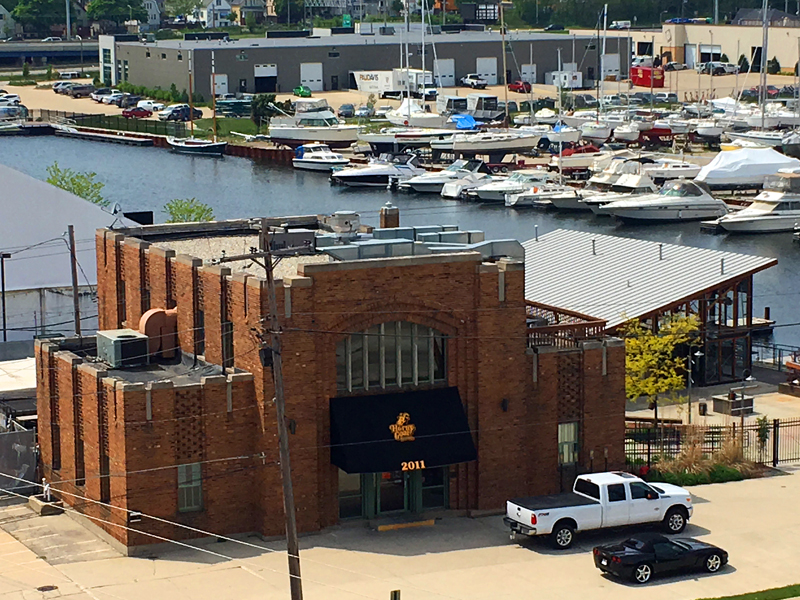 According to MFD Deputy Chief and historian Jim Ley, "The idea of a high pressure station was to boost water pressure in the area because of a poor water system after a large fire on Aug. 14, 1929.  There had been similar stations out east." A historic designation report notes, "The singular purpose ... was the replacement of Fireboat No. 17 in a heavy industrial area, where the streets and river were crossed several times by bridges and railway tracks."

The Depression quashed plans to build a second such station on the North Side of town. Anyway, by 1948, Ley says, the station was only used to fight seven fires and so it was closed in 1950 and, after selling the pumps, used for training. In 1962, MFD gave the building back to the city and 19 years later it was designated a National Historic Landmark. At the moment, it is empty. 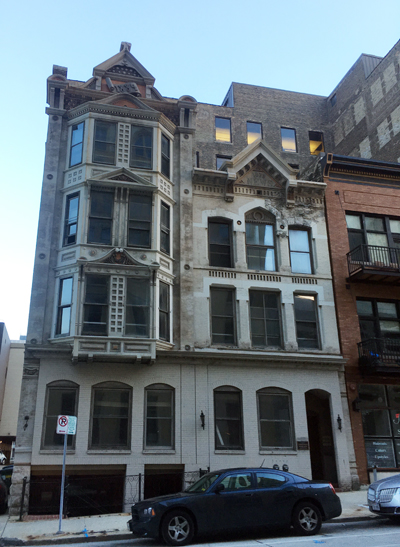 The two buildings at 216-22 E. Mason St. are remnants of a block that used to be called Newspaper Row. Across the street, the old Milwaukee Sentinel building also still stands. The three-story Victorian Gothic building to the east was built for the Milwaukee News – as the sign up top notes – in 1879 (five years after influential local writer and publisher William George Bruce got his start with the paper). The News was one of more than a dozen newspapers and magazines once headquartered on the block, hence the Newspaper Row name. The Journal of Commerce and the Milwaukee Daily Journal each also occupied the building for a time.

The building to the left in the photo was erected in 1884 for lawyer Samuel Howard, and the Wisconsin Legal News was briefly headquartered there. It originally had a first-floor walk-up over an English basement, which survives. The  buildings – conjoined in 1970 – sold a couple years ago for just under $300,000. 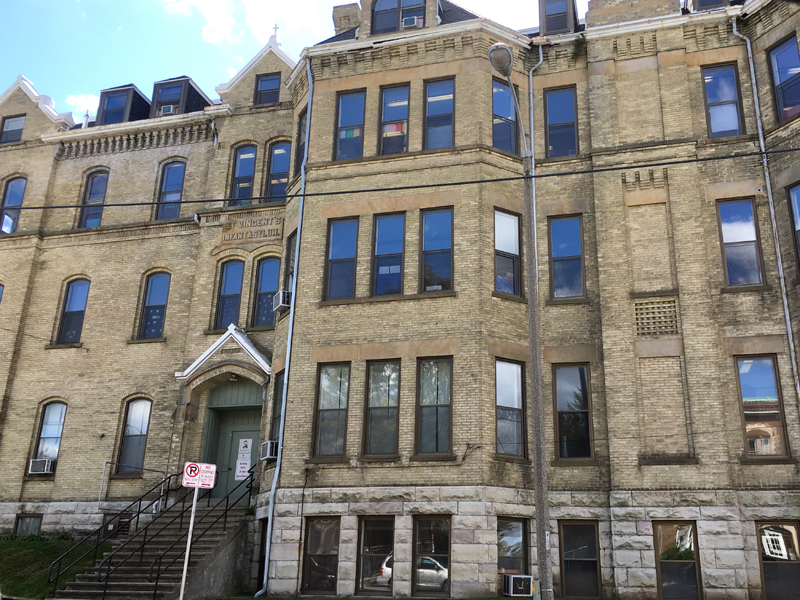 It's pretty hard to miss Charles A. Gombert's Gothic Revival home for the St. Vincent's Infant Asylum, 809 W. Greenfield Ave., erected in 1879 for the Daughters of Charity of St. Vincent De Paul, which was founded two years earlier and previously housed at 413 Virginia St.

The large building, which appears to have had at least three additions (1890, 1894 and 1900 and at least one – most likely the eldest – drawn by Edward Townsend Mix, who died in 1890) was home to as many as 500 children, whose parents were unwilling or unable to care for them, at a time. The Archdiocese of Milwaukee has records of the many "inmates" of the asylum, which became the St. Vincent Group Home in 1959. Today, the beautiful cream city brick building is home to La Causa's Early Education and Care Center. 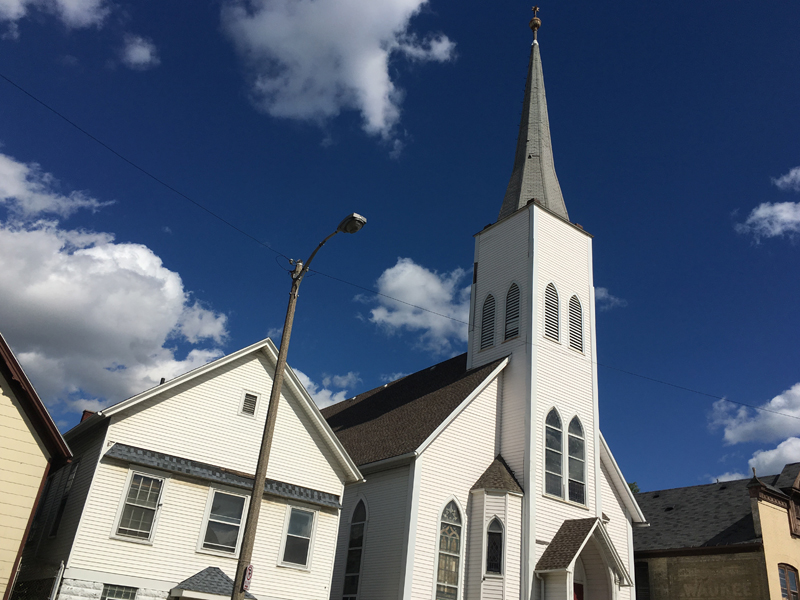 This one, 1418 W. Greenfield Ave., is a bit of a personal landmark, as my grandparents lived a block west of here and as a kid, driving in from New York for family visits, I'd wake up groggy right as we'd exit 94 at Greenfield Avenue and first I'd see the A-B Clocktower and, I'd know we'd arrived when I saw the distinctive white steeple of this old clapboard church and school. Nowadays, I can see it from my office and it takes me back every time.

At that time, I had no idea that my great-grandparents were confirmed and married there, and my grandfather – like his mother – baptized there, too.

According to "Memoirs of Milwaukee County: From the Earliest Historical Times," published in 1909, "In 1884, Rev. Heinrich Noehren organized on the south side an Evangelical church (in the German Evangelical Synod of North America) which later came to be known as Zion church. The society first erected a schoolhouse on property it had purchased on Greenfield avenue between Ninth and Tenth avenues, and used the building for services until its resources allowed the erection of the present church edifice."

The balloon-frame Zion Evangelical Church was erected in 1887 and additions were made in 1905 and 1908. The school, mentioned above, just west, pre-dates the church by four years and it, too, had an addition in 1905, and again in 1948. Today, they are home to the Pentecostal Church of God. 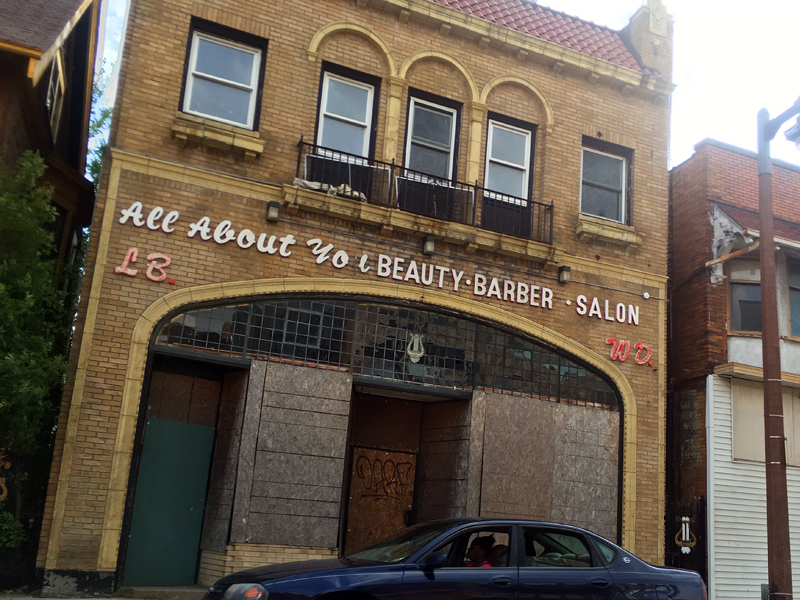 I haven't found much about this attractive vernacular storefront on 38th and North, but I always admire the small glass squares that make up the broad arched window above the entrance and display windows and the Mediterranean tiled roof motif, as well as the stone pilasters between the windows in the flat above. I especially like the way they terminate over the flanking windows in the center trio. Built in 1923 by Luebtow Realty, this has served as a music shop, a grocery store, a furniture store, a restaurant and a hair salon during its lifetime. Currently owned by the City of Milwaukee, it appears to be vacant at the moment.