Swanson's book takes us back to "Lost Milwaukee"

You may have read Carl Swanson's historical vignettes of old Milwaukee here at OnMilwaukee or on his blog, Milwaukee Notebook. Many of his excellent articles are now collected in "Lost Milwaukee," a book published in paperback by The History Press.

You may have read Carl Swanson’s historical vignettes of old Milwaukee here at OnMilwaukee or on his blog, Milwaukee Notebook.

Many of his excellent articles are now collected in "Lost Milwaukee," a book published in paperback by The History Press (which, disclaimer, has also published my books of Milwaukee history). 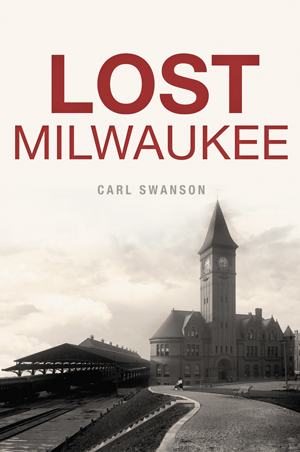 Swanson has an eye for a great story and a good eye for detail, too. His research skills are ace and he weaves a good yarn. He’s been especially keen to recreate the bygone life along both banks of the Milwaukee River north of Downtown, where all sorts of activity once occurred on stretches that are now returned to woods.

I love Swanson’s work and that’s because, in part, I think we have many of the same interests, and occasionally that means our work overlaps – we both wrote about the old Grand Theater on Holton Street, for example – but not as much as you might think.

But mostly I love it because I always learn about Milwaukee history from Swanson’s articles, which aren’t dry or encyclopedic. Instead, they’re engaging and eminently readable.

In "Lost Milwaukee," Swanson divides his work into sections, like "Settlement and Growth," "Entertainment," "Machine Shop to the World" and, of course, "Lost River Landmarks." The book is essential reading for anyone interested in Milwaukee history.

I asked Swanson about the book and his work and here’s what he had to say...

OnMilwaukee: Have you always been interested in history? What got you started writing it?

Carl Swanson: I love storytelling and true stories have a special fascination. They show us our community, our values, and who we are as a people. I find the process of writing helps me organize and focus collections of facts into stories that reflect the rich, vibrant nature of Milwaukee.

How do you choose your subjects? What sort of things pique your interest?

The more I know, the more I want to learn about my city. I’ll give an example. I frequently walk along the Milwaukee River and I’ve passed through Pleasant Valley Park countless times. I thought it nothing more than a rather unappealing few acres, of ragged trees and undergrowth.

Then I learned it was once a famous beer garden. People arrived here by steamboat. Steamboats! And, just across the river, there was a huge amusement park. And that park was next to a bike trail that was formerly the route of one of the fastest passenger trains in the world. The picture keeps unfolding and becoming more detailed.

Have all the pieces in the book been on the blog or are some written especially for the book?

Most of the 42 essays that make up "Lost Milwaukee" appeared originally on my blog. When the History Press asked me to write this book, I assumed it would be fairly simple – the writing was basically done, right? Wrong! After revising, expanding, editing, indexing, double-checking my sources, and rewriting some more, it would have been just as easy to have started from scratch!

Do you have some wish list things you've always wanted to do?

Closed factories, abandoned movie theaters, boarded-up houses with quirky architectural details, it's a big list and I’m adding to it all the time. At the same time, there is an urgency about it because every building that’s torn down feels like a story that will never be told.

I feel like there's more interest and perhaps more popular history being put down on "paper" than perhaps ever before. What are your thoughts on the status of historical work in Milwaukee these days?

This is a fantastic time to explore and learn about Milwaukee. Have a question? Throw it on one of several large and active Facebook groups. Join a society. Above all, take advantage of Doors Open. You will be blown away by the level of enthusiasm and love for Milwaukee that’s out there.

What do you think future generations will find fascinating about our era?

I’m better at looking back than I am at seeing the future but Milwaukee is certainly at a turning point. One of the chapters in my book borrows the city’s former nickname, "Machine Shop to the World." And for most of our city’s history that was as accurate a one-sentence description as you could find.

But it’s no longer true. Between the 1979 and 2000, Milwaukee County lost 47 percent of its manufacturing employment – about 100,000 lost jobs. That’s a staggering number and the fallout is all-too-evident in many neighborhoods. I hope future generations will look back and say this was the point where we pulled ourselves together and embraced what we will become.