History was made at the 2016 Pardeeville Triathlon last weekend, as Team Black Men Run out of Madison became the first African-American diabetic sprint triathlon team to finish a triathlon event, reports Madison365.

History was made at the 2016 Pardeeville Triathlon this past weekend, the third race in the Wisconsin Tri Series that took place in the Village of Pardeeville, 35 miles north of Madison. Team Black Men Run out of Madison — with members Anthony Curtis, Joseph Roy and Aaron Perry — became the first-ever African-American diabetic sprint triathlon team to finish a triathlon event.

"He brought it home!" Perry tells Madison365. "And once he crossed the finish line, we knew that we earned a little slice of history. It was really great because I saw the guys really step up and really understand that this was bigger than us. This is the type of accomplishment that could really help a lot of people struggling with diabetes or just struggling with chronic health conditions overall."

Diabetes remains one of the most serious health problems that the African-American community faces, and Perry says that he wants the triathlon team’s photo to represent the new faces of diabetes. Curtis is a UW-Madison police detective, Roy is a web developer and Perry is an author, keynote speaker, radio host and fitness guru.

"We hope that with our accomplishment last weekend at the triathlon people of all ages — children, teenagers, adults – would see African-American diabetic men all over the age of 50 making this history," Perry says. "We were hoping that the ministry of that would help any and every child, teenager, and adult newly diagnosed with diabetes understand that they could live a very healthy lifestyle if they would just commit to that. That was the overarching goal that we hoped would come out of this."

Perry founded Rebalanced-life Wellness Association in 2007 and has been working with businesses, corporations, community-based organizations, health educators and the faith community to create an awareness of the major health concerns affecting African-Americans and to actively promote a healthier lifestyle.

Perry doesn’t just talk about fitness; he steps up, and he does everything with the men he helps — running, riding the bike, swimming. "That really brings that whole point home of not just walking the walk but talking the talk," he says. "I think that’s critically important to be out there with the people that you want to reach. I think that’s one of the fundamental reasons why as a grassroots organization we are having success." 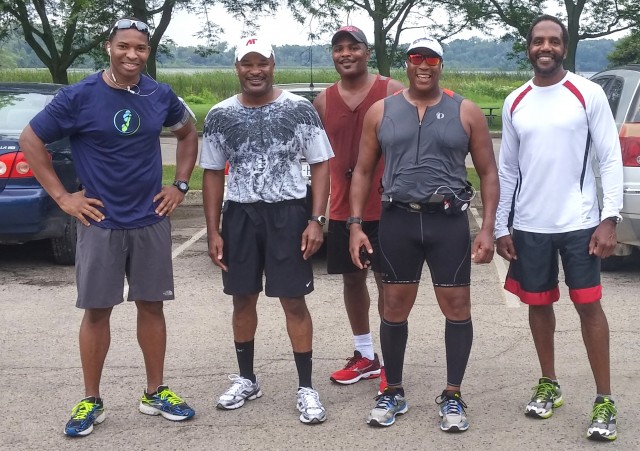 Madison’s Black Men Run group gets ready for another outing.

Last weekend’s accomplishments were just another in a series of "firsts" that Perry has accomplished and is planning to accomplish in health and fitness. In 2005, Perry became the first African-American diabetic man to ever finish an Ironman. He says that he started planning for last weekend’s historic event way back in 2008.

"I found that because there weren’t many African-American men out training for Ironman and that I was, in essence, forced to train with others on their schedule which was often in conflict with my own schedule," Perry remembers. "If you want to do this, it’s best to train with a group. In 2008, I thought: wouldn’t it be great if I could have guys in my social group train for a triathlon … that way our schedules and lifestyles closely mirrored each other?"

At first, he had trouble convincing men to join him.

"I think, initially, people saw that I did the Ironman, and they thought I was some sort of freakish athlete," Perry says. "They soon realized that I am just an average man with great determination. My struggles are the same as yours. As they came out to my events, they realized that ‘I can do this, too.’

"I kept doing my men’s health event, and I kept talking about disparities and the stage we were at in Dane County having some of the poorest health outcomes for black men," he continued. "Over the years, I kept pushing it and pushing it. I knew that if I kept talking about these health and fitness issues as a diabetic, that it would slowly catch on with other men. That’s exactly what has happened over the last year and a half."

Perry has brought Black Men Run, which originated in Atlanta, Georgia, and has 50 chapters throughout the United States, here to Madison. Black Men Run meet regularly in Madison to run around town, to talk about health and fitness, and to bond.

"Black Men Run has gained the attention of many, many men in our community," Perry says. "It’s a great group of men."

"Hats off to all of the organizations that are out spreading the word [about health and fitness issues], but what we’re really realizing is that you have to go beyond just putting pamphlets in the library and hoping that people see it," he adds. "My Rebalanced-life Wellness Association organization is a grassroots organization, and earlier this year, we organized the largest group of African-American men to run a 5K event – the Shamrock Shuffle."

Perry also organizes the annual "Soul Stroll" for Juneteenth and the "We’re Off to a Good Start," a yearly physical activity and nutrition kickoff program. The goal of that event is to empower black men ages 10-81 to get healthy and to keep their New Year’s resolutions by developing attainable goals they can stick with all year long.

"We are getting a lot of requests from people in cities like Milwaukee, Green Bay, Racine and Beloit who are asking us to share some of the things we are doing in Madison with them," Perry says. "That’s really consistent with our vision to help lead Dane County as the healthiest in the state for black men to live. We are turning this into a statewide healthy competition among communities in which black men live."

Running tips from a pro

Where do you run, Milwaukee?