Top Milwaukee and state officials agreed Wednesday that Wisconsin must move as quickly as possible to replace all of the estimated 176,000 lead pipes providing drinking water to homes and business in the state, Madison365 reports.

Virginia Tech University professor Marc Edwards, who led the effort to test lead-contaminated drinking water in Flint, Michigan, told about 250 people attending a symposium at Marquette University that, "No one that has a lead pipe, I don’t feel, can ethically ever be told their water is safe to drink." 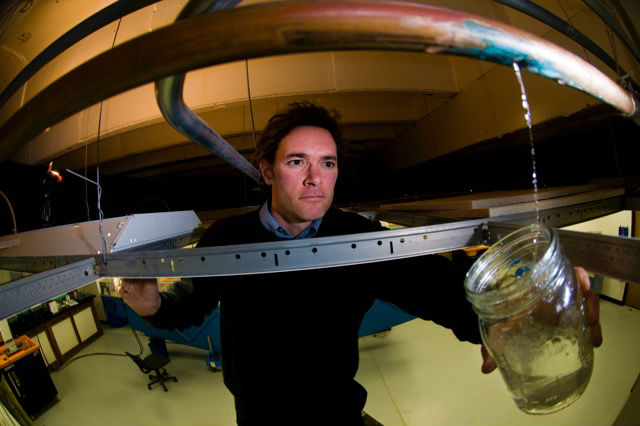 Royal noted that Milwaukee and the state figured out how to pay for a $500 million new basketball arena for the Milwaukee Bucks but seem baffled by how to remove lead pipes from the ground that may be contributing to the high rate of lead poisoning among the city’s children.

"We’re talking about whether it’s economically feasible to save our children in Milwaukee," he said, adding that the incidence of lead poisoning here is higher than in Flint. 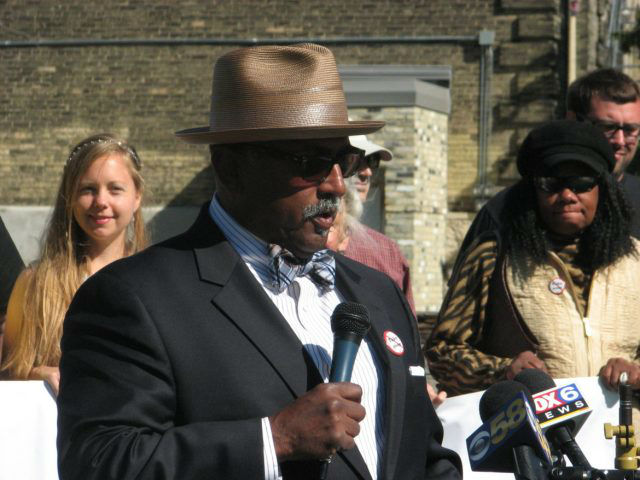 Fred Royal, president of the Milwaukee chapter of the NAACP, speaks at a rally in 2015. Royal spoke at a symposium at Marquette University Sept. 7, 2016, challenging Milwaukee Mayor Tom Barrett to take strong action to reduce the danger of lead in the city’s drinking water. (PHOTO: Brendan O'Brien/Milwaukee Neighborhood News Service)

Barrett declined to be pinned down on how much the city would spend to remediate the problem, promising "we’re going to be as aggressive as we can." He acknowledged the current approach of placing corrosion inhibiting chemicals in the drinking water to keep lead from flaking off of aging water pipes is a "Band-Aid" approach.

In the meantime, both Barrett and Edwards suggested residents should install filters costing as little as $30 or use bottled water for drinking and cooking. Both agreed filters are effective, if maintained, but the long-term solution is to remove the pipes altogether.

The Wisconsin Center for Investigative Journalism reported in February that the lead water lines serving homes, businesses and schools in the state pose a risk to consumers and that the existing federal and state laws fail to protect the public from lead in water. On Wednesday, Edwards called the current regulations "a total sick joke on the U.S. population." 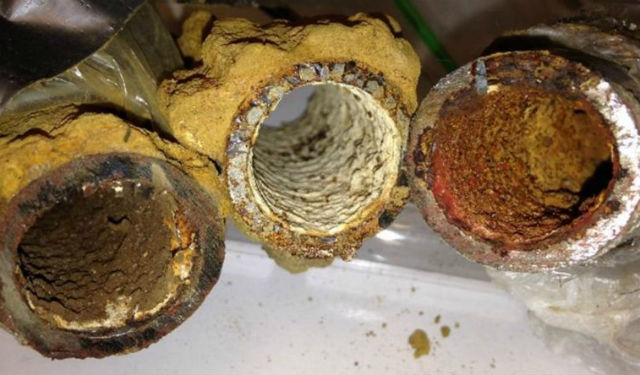 Lead from corroded pipes in Flint, Michigan, is partially to blame for a public health crisis in the impoverished community. After the city switched its drinking water source in 2014 to the highly corrosive Flint River, there was a spike in lead poisoning among Flint’s children. Studies show 4.9 percent of Flint children tested have lead poisoning compared to 8.6 percent of Milwaukee children tested. (PHOTO: Siddhartha Roy/FlintWaterStudy.org)

In the wake of the Flint disaster, the Wisconsin DNR issued grants totalling $14.5 million to 38 communities for full replacement of both the property owners’ portion and the city’s portion of lead service lines; $2.6 million was allocated to Milwaukee. Barrett chided Stepp for failing to give Milwaukee a larger portion of the funding given that the city has 40 percent of the estimated lead service lines in Wisconsin.

Stepp said her agency had to balance the needs of Milwaukee against those of other communities around the state with lead service lines, including Ashland, Beloit, Kenosha, Janesville and Racine.

"There are lots of areas of Wisconsin outside of Milwaukee that are suffering from these same challenges," she said.

The panel did agree on this much: Replacing just the publicly owned portion of lead service lines will not solve the problem.

While such partial pipe replacement is required under some circumstances by the federal Lead and Copper Rule, that can actually make the situation worse. Researchers say lead can be released when those pipes are disturbed and when new copper piping reacts chemically with old lead lines. Leaving the property owners’ portion in the ground, Edwards said, "will poison children for generations." 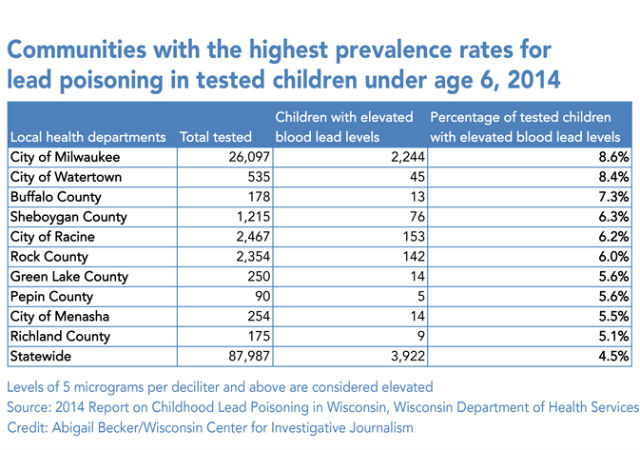 A test last year of six Milwaukee homes found levels of lead in the drinking water increased – in some cases astronomically – after the city did partial lead service line replacements during water main repairs. One home, for example, measured up to 328 parts per billion of lead after the replacement, compared to the baseline measurement of 6.5 ppb. While no amount of lead is considered safe, the U.S. Environmental Protection Agency has set 15 ppb as an action level, meaning steps should be taken to reduce lead in the water.

Barrett said the city has suspended all water main repair work in areas with lead service lines except in cases of emergency.

The testing also showed that even samples taken sequentially from the same tap can have radically different readings. At one home, lead concentrations in 12 samples ranged from 2 ppb to 199 ppb, according to the study.

Because of that extreme variability, Edwards said, testing for lead is almost useless. "No matter how much you sample, I will never ever say that water is safe," he said.

Statewide, nearly 4,000 children, or 4.5 percent of those tested, were diagnosed as lead poisoned, according to 2014 state Department of Health Services figures, the most recent available. Among them were 2,244 children in Milwaukee. In that round of testing, 8.6 percent of Milwaukee children tested came up lead poisoned compared to 4.9 percent in Flint. 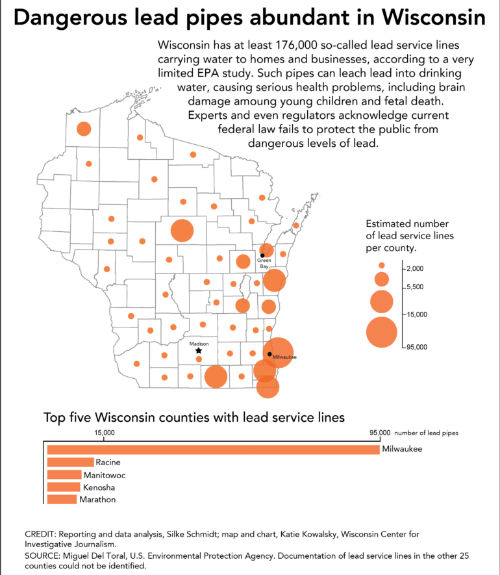 Lead’s effects are severe and permanent. Reduced intelligence, learning disabilities and developmental delays have all been attributed to lead exposure in young children, particularly those under age 6 whose developing brains are most vulnerable.

A 2013 study of Milwaukee fourth graders linked childhood lead poisoning to disruptive behavior at school. Researchers have found a greater likelihood of violent crime in adulthood among children in Cincinnati who were lead poisoned. Edwards also found an association between lead exposure in pregnant women in Washington, D.C. and an increased risk of fetal death.

The EPA has estimated that drinking water accounts for about 20 percent of average lead exposure, but as much as 85 percent of exposure for infants consuming formula made with tap water.

During a keynote speech, Edwards called the dangers posed by lead pipes a "government-made problem," noting that cities including Milwaukee for many years required builders to use lead plumbing.

He also lambasted the "culture of corruption" at the EPA and the U.S. Centers for Disease Control and Prevention, which he said falsely assured residents in Flint and during a 2004 lead crisis in Washington, D.C. that their water was safe. He noted that eight people have been indicted so far in the Flint water disaster and predicted more criminal charges will be forthcoming.

Stepp, whose agency has been criticized for failing to crack down on polluters, said the problems in Flint convinced her Wisconsin must do more to protect residents from lead in their drinking water. She congratulated Edwards for his "courage" in bringing the Flint situation to light.

"If there’s any silver lining to Flint, Michigan, it’s this: It’s that people like you, everyday people, and policy makers at the state and federal levels are, for the very first time, talking about drinking water in a really serious way," she said.

– Dee J. Hall, a co-founder of the Wisconsin Center for Investigative Journalism, joined the Madison365 staff as managing editor in June 2015. She worked at the Wisconsin State Journal for 24 years as an editor and reporter focusing on projects and investigations.