OnMilwaukee has learned that not only was a prison nurse ready to testify that she was the one who put the hole in Steven Avery's blood vial, but that holes like that are not only common, but the way the vials are supposed to work.

By Jessica McBride Special to OnMilwaukee.com Published Jan 13, 2016 at 9:06 PM
For more "Making a Murderer" coverage, including the case's unanswered questions and other potential suspects, click here.

The prison nurse who originally drew Steven Avery’s blood and put it into the vial featured prominently and dramatically in the Netflix "Making a Murderer" documentary "would testify that she was the one who put the hole in the vacutainer tube at issue," a court document obtained by OnMilwaukee says.

The nurse, Marlene Kraintz, wasn’t called to testify because the prosecution didn’t think the defense had raised the blood hole theory at trial strongly enough to warrant rebuttal. This runs in contrast to the Netflix documentary, which presents the defense finding the hole in the Avery blood vial as a virtual "eureka" movement to advance its framing theory. They would later claim that it was law enforcement officers who sneaked into the Clerk of Courts office to remove Avery’s blood from the old vial and plant it in Teresa Halbach’s car.

Furthermore, two national experts – including the chair of the committee that writes the industry standards on drawing blood samples – told OnMilwaukee that such blood vials are supposed to have holes pierced in their rubber stoppers. According to the experts, that’s how the blood gets into the vial.

Not only is it not uncommon, but it’s the way the vials – in this case, according to court records, a purple-stopped Vacutainer – are supposed to work. According to Dennis Ernst, director of the Center for Phlebotomy Education, in Corydon, Ind., there are two ways to use such vials. The first method involves the nurse drawing blood with a syringe and then sticking the syringe into the rubber stopper top of the vial to put the blood in the tube. The second way uses what is called a "tube holder adapter," a device with needles on both sides. One needle goes into the person whose blood is being drawn, and the other needle goes into the tube stopper to insert the blood.

"If it’s properly filled, that stopper will always have a pierced marking," said Ernst, who is also the chair of the national committee that writes the industry standard on phlebotomy – the practice of blood drawing – and drawing samples.

The second expert, Danielle Black of the National Phlebotomy Association in Landover, Md., agreed with Ernst.

"That’s with any tube," said Black, who both works as a phlebotomist and also trains people in phlebotomy, when asked if it would be common to see a hole in the top. "You pierce the rubber stopper." Both experts also said the same was true back in 1996 when the Avery blood was originally drawn.

Ernst said that the only way such a blood vial would not have a hole is if the medical professional violated standards and did not properly insert the blood in the tube and instead just "dumped it in there." He said that phlebotomy is a largely unregulated field, but he reiterated that if the blood is drawn properly, "The stoppers are pierced."

"The tubes have a vacuum in them by the manufacturer that pulls blood into them when the stopper is pierced by a needle attached to a syringe," he said. With the other device, he noted, "One needle pierces the skin, and one fills the tube. You can always tell it’s been punctured."

Black concurred. "You will see that small piercing imprinted on it," she said of the stopper.

Neither expert had seen the documentary, but Ernst expressed surprise when told it featured a blood vial with a stopper hole as if that is something unusual to find.

"How can that happen when there are plenty of experts to testify to that?" he asked. "Piercing the stopper of the tube is the recommended and the only way those tubes should be filled."

That's not, however, how it plays in the popular documentary. When Avery defense attorney Jerry Buting finds the hole pierced in the top of the blood vial at the Manitowoc County Clerk of Courts office, he calls it, "a red letter day for the defense."

In the same scene, Buting also says that the laboratory that processed the 1996 vial does not put such holes in blood vials. But Ernst and the other expert both said the holes are pierced in the vials at collection stage – by, say, a nurse – when the blood is drawn, not when it’s later analyzed in labs.

At the same time, of course, this doesn’t eliminate the possibility that someone could have planted blood by removing it another way from the 1996 Avery tube – putting a syringe into the already existing vial hole, for example, or by removing the cap (which a prosecution expert testified had been removed). However, the documentary doesn’t explain to viewers how common such holes are.

Furthermore, the documentary makes a big deal of the seal being broken on the vial's packaging (it was kept in the Manitowoc County Clerk of Courts office and was evidence related to Avery’s earlier wrongful conviction case for a sexual assault). However, a review of court records in the case shows that the court was told by the defense that then Manitowoc County DA E. James Fitzgerald and members of Avery’s defense team met and opened packages of evidence in the 1985 court file with the court’s approval to determine what to send out for additional tests. On June 19, 2002 at 12:25 p.m., Fitzgerald opened the box with the blood vial in it and closed it again two minutes later. It was believed the evidence tape seal was broken at that time, the court records say.

The defense was trying to point out the seal was already broken so someone could have easily accessed the vial later. They said it had just Scotch tape reapplied, but when they opened it for review, it was sealed with nothing – including no tape.

The statement about Kraintz is contained in a Jan. 16, 2007 filing made in court by the prosecution team in the Avery case. They were seeking to rebut the defense motion seeking to use the blood planting theory. OnMilwaukee discovered the document while undergoing a comprehensive review of the court file at the Clerk of Courts office on Wednesday. 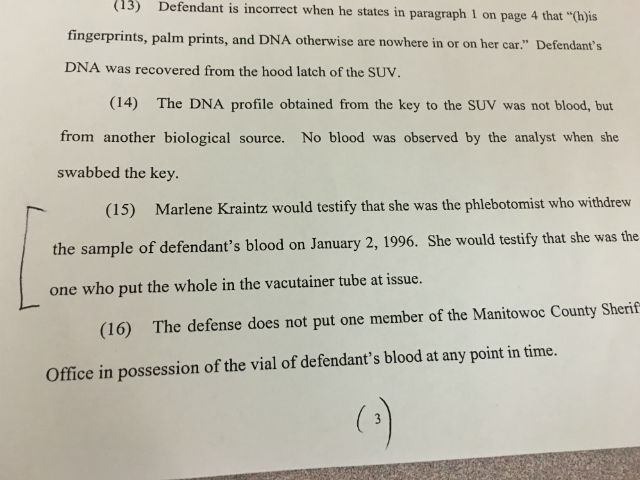 The prosecution motion was in response to a defense motion seeking to allow a blood planting theory that had stated that "M. Kraintz took the Avery blood at the prison in 1996."

The defense had contended, "There is no legitimate explanation for the needle hole in the cap that we know," in the court documents. They also contended that the planter "could have just removed the cap."

Asked why Kraintz was not called to testify, then DA Ken Kratz said Wednesday, "We did not believe that the defense had raised the issue significantly enough (at trial) claiming that there was any tampering done to the blood vial. Although the documentary suggests that the hole in the vial of blood was significant, everybody at the time knew and certainly the filmmakers had to know that the hole in the vial was put there by the nurse who drew the blood."

Kratz said that Kraintz had told the prosecution team that she put the hole in the vial top when she drew Avery’s blood.

In his closing argument, the defense attorney said, "The vial of blood has a hole – what appeared to be …a hole in the middle right there, which is where professionals would gain access to the blood if they need it." They then said the vial topper was "taken off."

This matched the testimony of an FBI expert who had said the vial’s top was taken off. However, this is the same expert the defense tried to discredit for testifying that the EDTA present in the blood vial was not present in the Avery blood found throughout Teresa Halbach’s car.

OnMilwaukee asked Avery defense attorney Dean Strang for a comment. A local PR firm representative responded for Strang, noting, "Due to traveling, Mr. Strang is not available for comment; however, that is also the type of detailed case questions that he is not addressing in media interviews."