In a new exclusive "Making a Murderer" report, OnMilwaukee has discovered that one of the jurors in Steven Avery's murder trial was a volunteer for the Manitowoc Sheriff's Department. Carl Wardman was an official and very active volunteer, Sheriff Robert Hermann said.

By Jessica McBride Special to OnMilwaukee.com Published Jan 06, 2016 at 5:26 PM
For more "Making a Murderer" coverage, including the case's unanswered questions and other potential suspects, click here.

Carl Wardman was an official and very active volunteer for the Manitowoc County Sheriff's Department at the same time he was serving as a juror on the Steven Avery murder trial, Sheriff Robert Hermann confirmed to OnMilwaukee on Wednesday.

According to the court file, Wardman was a regular voting juror in the Avery case and was not one of the two jurors excused before deliberations. The jury was not sequestered.

Hermann – and court transcripts – also confirmed that Carl Wardman's son, Chris Wardman, worked as a Manitowoc County Sheriff's Department supervisor in the jail during the trial. He was a sergeant for the department at the time his father served on the Avery jury, ultimately finding Avery guilty of murdering photographer Teresa Halbach.

This matters, at least to some, because Avery’s defense focused on allegations that officers with the Manitowoc County Sheriff’s Department had framed Avery and planted evidence.

Furthermore, the Netflix "Making a Murderer" documentary about the case focuses on that narrative: the same department was also involved in Avery’s earlier wrongful conviction case, for which he spent 18 years in prison before being exonerated by DNA evidence.

According to the court transcripts of the jury selection process, Wardman disclosed his volunteer work and son's employment, but neither the state nor the defense made a motion to strike him. He was quite open about his ongoing Sheriff’s Department ties, saying at one point that he wasn’t sure he wanted to be a juror because, "I like what I do for the Sheriff’s Department. I hate to miss it."

Asked whether he actually had a squad car that he drove around as a safety volunteer, he said, "Yeah. It says ‘volunteer’ on the side."

In jury selection, Wardman was asked if his sergeant son "had any involvement in the Steven Avery case?"

This may have been because, during questioning, Wardman, who used to work in a foundry, said that he had been arrested once for OWI 10 years ago, during which an officer from another agency took $3 cash he had and then lied under oath about Wardman "robbing" him, suggesting Wardman might be open to a framing defense despite his ongoing ties to the Manitowoc Sheriff’s Department. Asked if he thought officers could plant evidence or alter evidence, he said in jury selection "depends if they didn’t like him." He also said he had "no opinion" about Avery’s guilt or innocence and that he believed he could give Avery a fair shake.

He also said he believed that police officers are capable of lying under oath, and that he had not talked to his son about the Avery case. "No," he said. "But he had to take training or something for some kind of gizmo they’ve used. Other than that, no." He said he was referring to a stun belt, according to the court transcripts obtained by OnMilwaukee.

"Do you think that, um – do you think the police officers would come into court and lie?" Wardman was asked during jury selection. "Yeah," he said. "Because they can get away with it. Some judges believe them." Juries, too, he agreed.

When he worked for the department

Wardman said of his work for the Sheriff’s Department, "We go on—uh, out on patrol and we check, uh, houses and that, if people have went on vacation, and abandoned cars, and just keep our eyes open." He said he did this once a week.

"I take it you’re still doing that today?" he was asked during jury selection questioning.

"Yes," he said, once a week for four hours. Asked, though, if he had met or become familiar with members of the Department, he said "Not – not right now, no," because he had just started. He said he got his assignments from a book.

A review of the jury selection process shows other jurors were struck for cause for various reasons, including exposure to media coverage of the case. And others because they knew people in law enforcement. OnMilwaukee will have a full report on the jurors’ backgrounds Thursday.

Sheriff Hermann said of Wardman's volunteerism for the department, "He applied 9/17/06," and added that Wardman likely started with the department in October 2006 (court transcripts say November). He said Wardman worked four hours as a volunteer in 2006.

In 2007, though, the year that the Avery trial occurred, Wardman worked 301.5 hours as a Manitowoc County Sheriff's Department volunteer and was one of the department's most active volunteers in terms of hours, said Hermann. Wardman is still a volunteer, said Hermann, and he sees Wardman "pretty regularly" when he does things like taking squad cars in for service.

Hermann said that he did not have the specific dates that Wardman worked in 2007, just that he worked a total of 301.5 hours – more than most volunteers that year.

To be a volunteer for the Sheriff's Department as Wardman was and still is, applicants' backgrounds are checked, said the sheriff. Those who become volunteers are given a volunteer shirt and hat. They sometimes drive a vehicle that resembles a squad car that has the word "volunteer" on the side, but does not have a siren and has amber, not blue, lights, said the sheriff. The volunteers are not paid but are usually recognized at a dinner and with a certificate. He said they have access to the Sheriff's Department premises.

"They can come in and are buzzed in," he said. "They can get down into the basement where they can pick up keys or talk to the shift commander and get their assignment."

"Basically what we do is we have them check residences if people are gone," the sheriff said of the safety volunteers. "They check on disabled vehicles and things like that. A lot of it is moving our vehicles around for service."

Hermann, who was an undersheriff at the time of the trial, said he can't remember for sure whether he knew at the time of the trial that Wardman was an Avery juror. Asked whether this gave Wardman a bias, the sheriff pointed out that both defense attorneys and prosecutors are able to strike jurors and that the defense did not strike Wardman. The sheriff also defended his department, saying that he was certain officers had not planted evidence of framed Avery.

Wardman is the juror whom alternate juror Richard Mahler said earlier this week had a son who worked for the Manitowoc County Sheriff's Department at the time of the Avery trial. However, details and the son’s rank and the father’s volunteerism were not previously reported.

Chris Wardman’s online resume says he was a "Corrections Sergeant / Supervisor February 2004 to July 2010" with the Manitowoc County Sheriff's Department. From 2000 to 2004, Chris Wardman worked as a corrections officer for Manitowoc County Sheriff's Department. His resume says that he was "handpicked by Administration for the development, implementation and management of the Inmate classification system."

The caption under the photo says: "Carl Wardman, left, and Donald Hammel pose with the Manitowoc County Sheriff's Department volunteer car. They are among between 40 and 45 volunteers who help the department keep the community safe."

Here is how the story appears in the newspaper's archives: 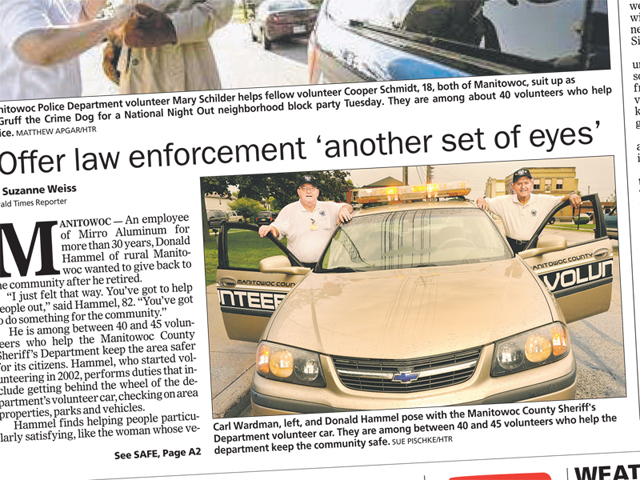 OnMilwaukee obtained Carl Wardman's name from the juror list provided by the Manitowoc County Clerk of Courts Office. Here is how it appeared on that list:

Carl Wardman's phone number is disconnected, so he could not be reached for comment. Chris Wardman, who now works in law enforcement for a Florida college, did not answer his phone or respond to email or voicemail seeking comment.

The Manitowoc Herald Times Reporter news story focuses more on the other man in the photo, but it describes the volunteer program. It quotes Hermann as saying of the volunteers, "They're another set of eyes out there. If they see anything, they call us." The article says that more than 5,000 volunteer hours were donated to the department since 2011. It said that the department's Care Call program makes use of "volunteers to call residents living alone or recovering from surgery. Volunteers also help with local parades, deliver ballots to polling places, do house checks, make sure tagged vehicles get removed for roadsides, help with jail-and bail fundraisers, airport events and the department's booth at the Manitowoc County Fair."

According to the article, a deputy inspector said, "There's a lot of things they do that wouldn't get done without them. They have become more of an integral part of our regular operation, making sure squads are where they're supposed to be – for service or installation of equipment." 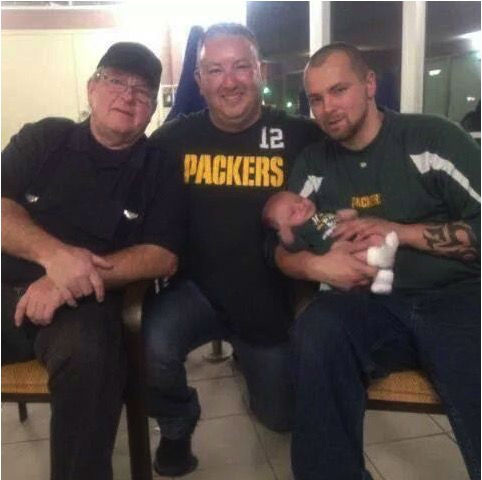 Carl and Chris Wardman appear together in a family photo on Facebook. Chris Wardman also discusses his Sheriff's Department history on his LinkedIn site. According to that site, Chris Wardman is now acting manager of public safety for a college in Florida.

It also says he worked as a sergeant for the Manitowoc County Sheriff's Office from January 2000 through July 2010. He writes: "My duties included acting as shift supervisor and sworn officer for the corrections department, including the juvenile detention center. Keeping peace and order within the corrections facility and juvenile detention center, performing background investigations of potential new employee's, sitting on hiring committee review boards, acting as lead member of the Cell Extraction and Removal Team (CERT), performing shift and department training, escorting prisoners to and from court, escorting prisoners to and from other correction facilities, completing performance reviews, corrective training and discipline as needed."

His online resume says that from 2004 to 2010, when a supervisor with the Sheriff's Department, his duties were to "Coordinate operations of correctional facility by supervising and scheduling six to 10 full and part time correctional staff." He also listed the following duties: