What does the first "Making a Murderer" doc show?

Before there was "Making a Murderer" on Netflix, there was "The State of Wisconsin vs. Steven Avery," a short film by the same documentarians. So what does it show?

By Jessica McBride Special to OnMilwaukee.com Published Jan 13, 2016 at 4:16 PM Photography: Jimmy Carlton
For more "Making a Murderer" coverage, including the case's unanswered questions and other potential suspects, click here.

Before there was "Making a Murderer" on Netflix, there was "The State of Wisconsin vs. Steven Avery," a short film by the same documentarians.

So what does it show? That’s hard to say, considering nobody seems to be able to get their hands on it.

The Columbia University Film Festival website from 2008 describes the short film as "a documentary about an exoneree who strives to hold law enforcement accountable for taking eighteen years of his life."

An attempt to reach the filmmakers through Netflix's public relations office was not returned. Meanwhile, the head of the fest for Columbia University didn’t return a request to see it either. 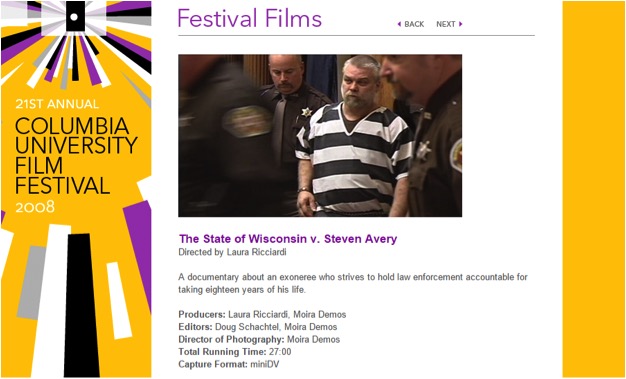 The director of Industry Outreach and Columbia Film Festival Film Program – where it screened in 2008 – did not return a request to watch "The State of Wisconsin vs. Steven Avery" or obtain the script. Meanwhile, a message sent to an email address listed for one of the filmmakers on the 2008 documentary's website bounced back.

Former prosecutor Ken Kratz said he asked to watch the short doc as a condition of speaking to the filmmakers when they contacted him in 2013 to say they had struck a deal with Netflix. They refused, Kratz said, so he didn’t do the interview.

He thinks the earlier short film, which was made a year after the trial, would shed light on the filmmakers’ "agenda." Although they largely framed the later Netflix series around the Avery family and Avery’s defense team, the documentarians have denied creating an advocacy piece in media interviews. They say they tried to present the main pieces of the state’s evidence in the documentary, which Kratz disputes, and they say the former prosecutor wouldn’t talk to them.

"You didn’t see them following the prosecution around," said Kratz. "What does it show? It could show their real agenda. If it’s straight down the middle, then I will be the first to apologize."

The short film ran 27 minutes long versus the 10 hours that Netflix devotes to the topic. It was directed by Laura Ricciardi, one of the two filmmakers behind "Making a Murderer." The other documentarian, Moira Demos, produced it along with Ricciardi, as well as served as co-editor and director of photography.

The filmmakers were graduate students when they read an article on the Avery case and headed to Manitowoc to obtain scads of riveting behind-the-scenes footage as the case was proceeding through the criminal justice system.