The timing of a couple press releases today brings up the question of whether or not the images showing a revamped The Shops of Grand Avenue embrace diversity.

A pair of press releases I received this morning resurrected the question of whether or not early design renderings, images of a future Milwaukee, embrace diversity.

This morning, a statement from KINGFISHmke.com – which calls itself "Milwaukee's Independent Voice" – appeared in my inbox with the headline, "White Millennials Will Get Grocery Store and Urban Blacks Will Not," and bearing the byline of Bob Graf.

The post balked at last week's reports of a potential new grocery store in the Plankinton Arcade.

"I found this interesting since there is the 'Public Market,' a major food destination downtown along with a major grocery store at East Pointe Market Place near downtown on Juneau Ave. Also, I have come to understand that when the word 'millennials' is used to describe young adults living and working downtown it actually means white upper middle class young adults.

"Few, if any, low income Black and Hispanic young adults are considered 'millennials' and live downtown. Downtown white 'millennials' have cars to get out to grocery stores in the surrounding neighborhoods and soon will have their own publicly funded downtown streetcar, primarily financed by deferring revenue away from public education, to get around downtown from home to work to shop and to entertain."

Graf added, "Residents of North Central Milwaukee live in what is considered a 'food desert,' a lack of major food stores and many do not have cars or other forms of adequate, reliable transportation.

"So the lesson to be learned seems to be that in Milwaukee if you are white, hungry and have money and transportation there will be many places to shop and eat. If you are black, hungry and have little money or transportation you will not have many places to shop and eat. White downtown 'millennials' will get their grocery store and urban blacks will not."

The timing of that email with one that followed soon after, showing renderings of the plan to revamp The Shops of Grand Avenue, caught my eye.

Consider this before and after series included in the renderings ... 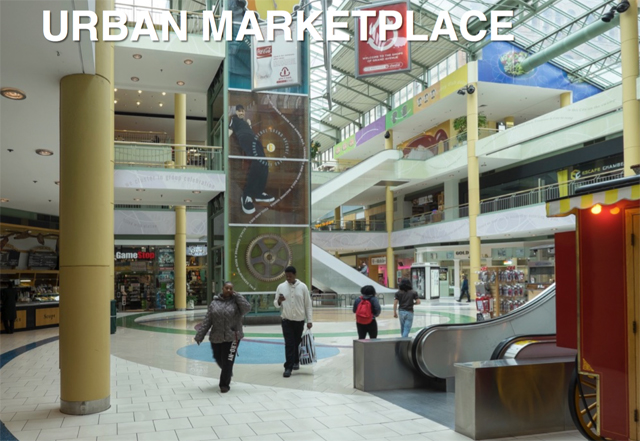 I realize, of course, that these images were created to emphasize different things – the present and the future, the reality and the hope or expectation – other than just diversity. Also, obviously, one scene is quite empty and the other considerably more populated. But while a more populated mall is a win, certainly a more populated and diverse mall is a bigger victory.

Some of the renderings, like this one, are a bit more diverse... 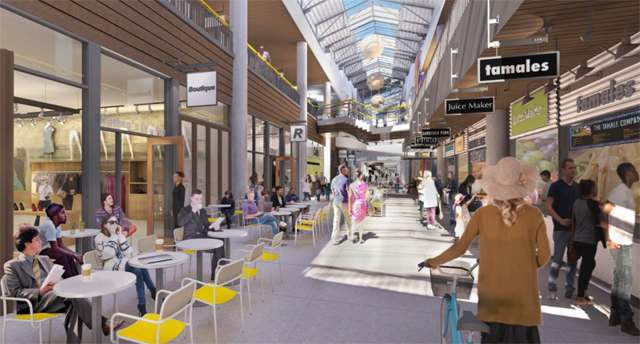 Looking at the renderings, I'm excited for the mall to come alive again, but I'm also reminded of what Mary Louise Schumacher wrote last November in The Milwaukee Journal Sentinel in a post about the noticeable whiteness of renderings created for the lakefront makeover:

"The humans are uniformly happy and somehow familiar, like old acquaintances you can't quite place. They cheerily glide in sporty sneakers, chat on cellphones, point at fireworks and eat baguettes.

"They are also, far more often than not, white. ... This new class of renderings reinforce an iconography of white privilege."

In fact, the mall renderings are considerably more diverse than those lakefront images were.

"I think the renderings do a great job of capturing the diversity of people who will potentially inhabit the new space," Matt Cordio, co-founder of Startup Milwaukee, told me via email this morning. "Grand Avenue has a potential to be one of the most diverse developments in the city and I'm glad that the architect and ownership group is thoughtful of that.

"The mall has to appeal to a broader and more diverse group of customers, there is a reason why the mall is currently dead. There has to be something for everyone and the lack of variety in the current tenant mix doesn't attract many people who don't work or live nearby."

If we remember that real diversity is a mix of races, genders, ages, social and economic classes, and ethnicities, Cordio makes a valid point.

"Currently I live in Walker's Point but don't have a compelling reason to visit the mall given the current mix of tenants," he said. "The mall has the potential to attract a wider array of people from across the city as it diversifies the mix of tenants in the space. NEWaukee night markets, one of the most diverse events in the city, take place on the doorstep of Grand Avenue Mall and have proven that people care about Wisconsin Avenue. You just have to give them a compelling reason to visit the space.

"With the easy access to public transit and its central location, this project has the potential to be one of the few places where Milwaukeeans can unite regardless of race or socioeconomic backgrounds. If you travel to urban marketplaces in other countries, you quickly realize what an important role these spaces play in bringing people of different socioeconomic backgrounds together. Due to the location and accessibility, this project has the potential to be even more vibrant and diverse then the Milwaukee Public Market."