This is the first in a new bar series called "Hidden Gems." Debra Mickey opened Mamie's, 3300 W. National Ave., in 1981 and has continued to improve the space - indoors and out - ever since.

In 1981, Debra Mickey – who was the single mother of a young son at the time – bought Mamie's Bar and Grill, 3300 W. National Ave., on a land contract. Mickey remains the sole owner of the bar, which celebrated its 35th birthday last August.

Mickey grew up in the bar business. Her parents owned three bars on the North Side – two of them were also called Mamie's – which was her mother's first name.

When Mickey first bought Mamie's, she didn't have a lot of money to decorate, so she went to antique stores and rummage sales in search of vintage signs and other old, interesting items.

"I didn't want to look at neon bar signs and beer cans lined up on the back bar all day. I wanted stuff in my bar that was different," she says.

Over time, customers donated items to the collection, including two vintage bikes and carriages that hang from the ceiling. There's also a camping cot and a vintage ironing board suspended from the ceiling. The most noticeable decoration at Mamie's, however, is the working stoplight that she purchased a decade ago from BBC Lighting, 2015 W. St. Paul Ave. 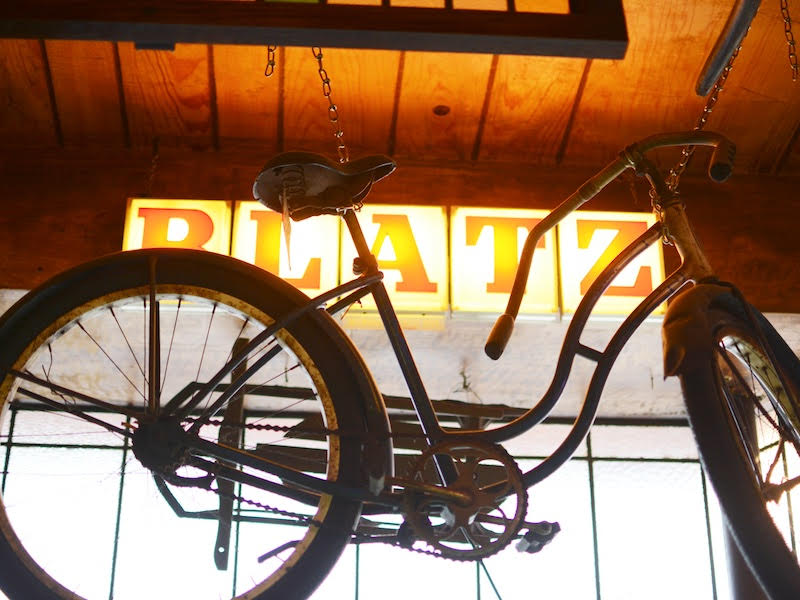 "I had a Charlie McCarthy doll in here for a while, but it was freaking out customers so I had to move him out of here so he wasn't 'staring' at anyone," says Mickey.

Mamie’s, which opens daily at 6 a.m. to accommodate third shift workers in the neighborhood, boasts a full bar but serves primarily domestic beer. Some of the specials include $2 domestic bottles on Saturdays, a large pitcher for $6.50 on Mondays and Thirsty Thursdays, which invite customers to drink all they want for $10 from 8 a.m. to 10 a.m. and again from 8 p.m. to 10 p.m.

"Mamie's has always opened every day at 6 a.m.," says Mickey. "We used to get a lot of railroad workers in here." 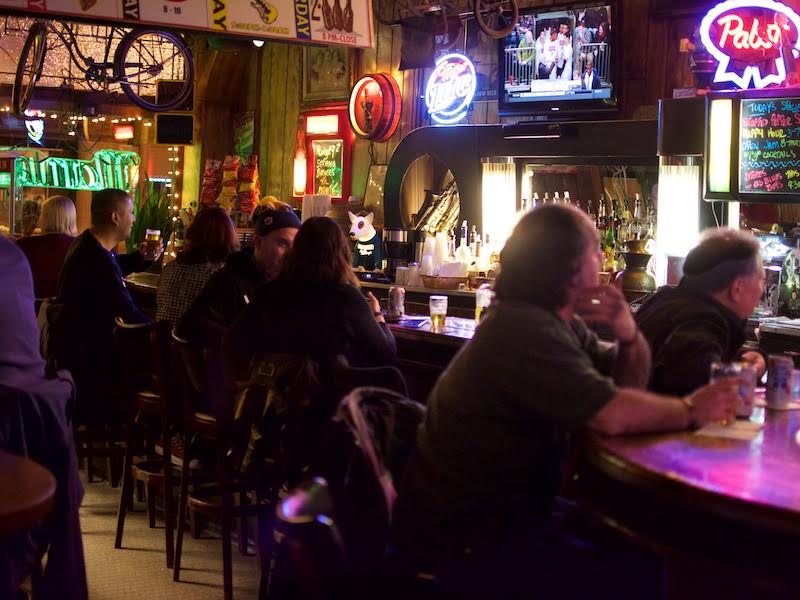 Although home to a jukebox stocked with gems from Otis Redding to Taylor Swift, Mamie's hosts live blues Tuesday and Friday nights (Tuesday is an open jam) featuring some of Milwaukee's most prominent blues musicians. 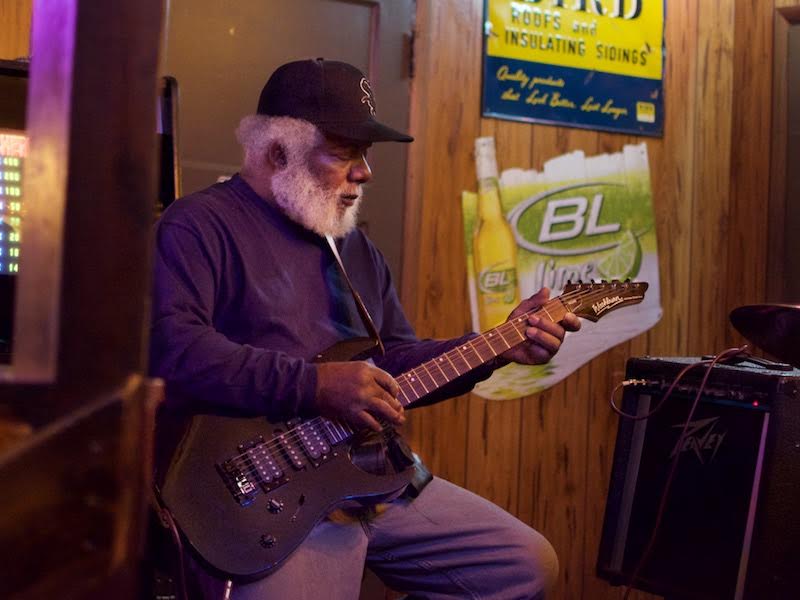 Mickey has received calls from blues musicians all over the country who are interested in playing at Mamie's and heard about it word of mouth – Mamie's rarely advertises. The issue, however, is money.

"Recently, a guy called me from Austin and said he had to play at Mamie's before he dies," says Mickey. "But then he told me what he wanted to play and I said, 'I only got 22 bar stools and a handful of high-tops, so if you're ever just passing through Milwaukee and wanna play for a couple of hours, give me a call.'"

Although she appreciates live music, Mickey herself is not a musician. "The only good time for me to sing is closing time to get 'em out," she jokes. 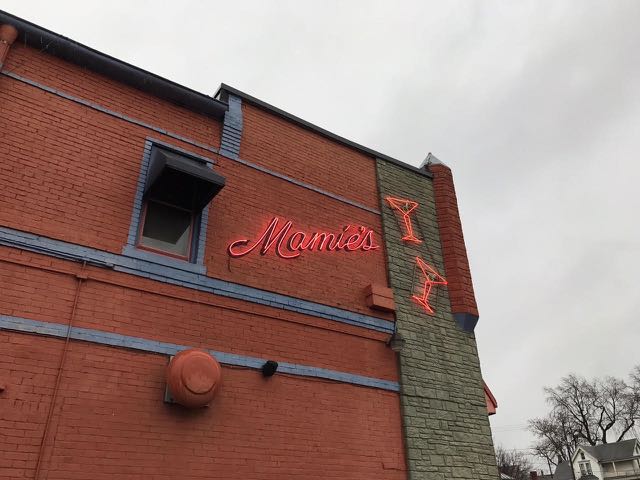 Mickey originally conceived Mamie's as a country bar. Thirty years ago, she hired a country-western band to play on a Saturday night, but she got a call from one of the band members on Thursday, saying the band had broken up.

"I called a friend and asked if he could find me a band in two days," says Mickey. "He said he could get me a band, but it 'won't be country and it won't be white.' Hell, I didn't care, I just knew a lot of people were showing up to hear live music."

When the band walked in, an African American Motown / blues band called The Misfits, the crowd went silent.

"We had a full house, but suddenly you could hear a pin drop. This was clearly not a country band, but once they started playing a couple of songs, everything went into motion and that was it. We were a blues bar," says Mickey.

Mickey said she recently admitted to a member of the Misfits that her crowd had no idea they were playing, and she purposely didn't tell anyone because she wanted to have a lucrative night and was worried no one would show up if they knew the original band cancelled.

"Then he told me the Misfits probably wouldn't have shown up had they known it was going to be a country music crowd," says Mickey.

But what happened that night 30 years ago is what continues to happen today. Mamie's is one of Milwaukee's truly diverse bars with people of all ages and nationalities sitting together in the same space.

"We got 'em from (age) 21 to 85 and all walks of life," says Mickey. "Last night I sat back and was looking at my crowd and it still amazes me: blacks, whites, Croatians, latinos. And I'm not trying to pat myself on the back, but my customers know I don't put up with any bullsh-t and so it's real comfortable in here."

Michele Behling has worked as a bartender at Mamie’s for 25 years. She credits Mickey and her customers as her reason for staying for so long.

"I love the boss – she calls it what it is," says Behling. "And it’s really friendly here. I never feel like I have to watch my back." 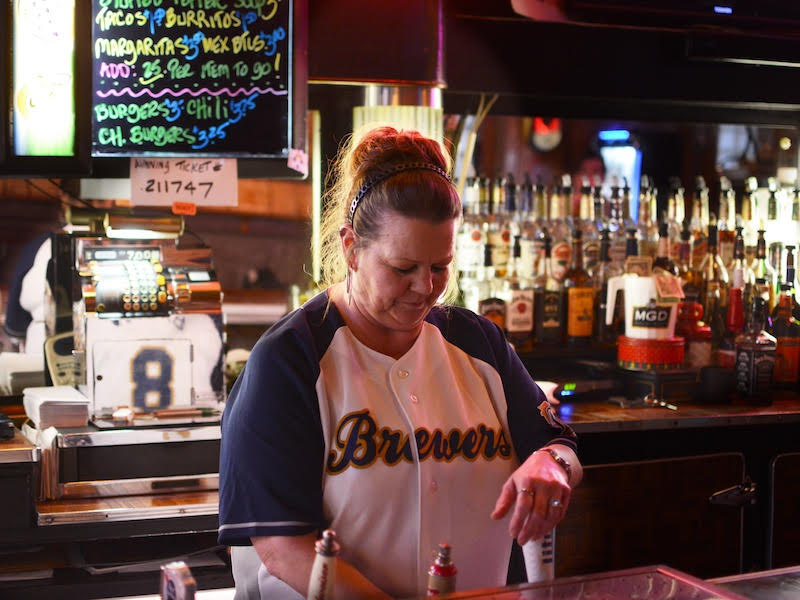 This August, Mickey will host her annual outdoor bash for the 36th anniversary on Mamie's beer garden perched under the massive vintage neon sign that is the original attraction for many of Mamie's customers (including the author of this article).

Next month, Mickey plans to have the building painted. "She needs a little lipstick," Mickey says.

According to Mickey, the neighborhood has changed a lot over the past decade and continues to improve.

Jim Locke is one of those customers. He started coming to Mamie’s in 1981 – the year the bar opened.

"I like this place because it has a lot of variety, no drama," says Locke. "I like to sit here, talk to people, drink my Miller. Well, except when I’m drinking Jack Daniels." 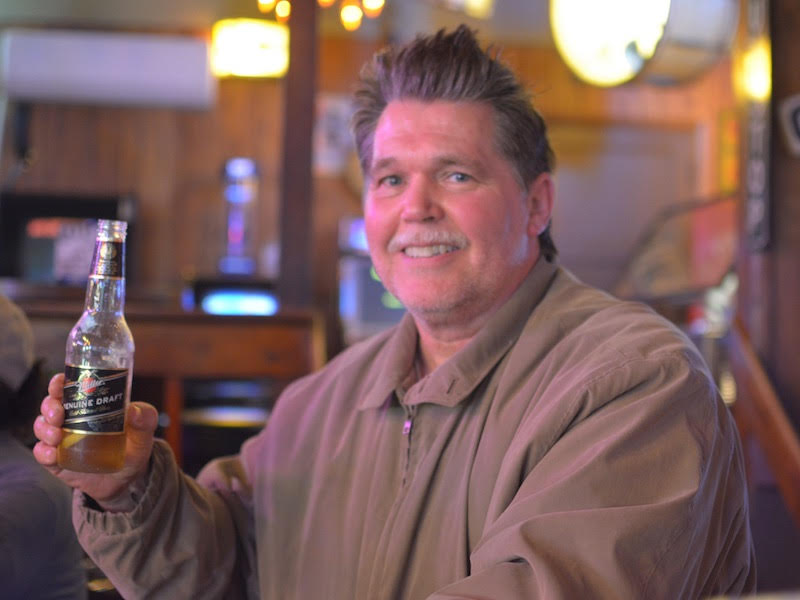