"Manlife" explains Lawsonomy through the eyes of a passionate follower

Remember driving by the "Lawsonomy" sign on I-94? There's a fascinating story behind it. Check it out during the Milwaukee Film Festival.

Like many Milwaukeeans, I drove by the "University of Lawsonomy" sign on I-94 in Racine County hundreds of times as a kid to or from an event in Chicago or to visit my grandparents in Ottawa, Illinois.

There was also a building on the land, behind the curious and weathered sign, with "study natural law" painted on the roof. Because it was prior to the internet, I could only wonder where and what the University of Lawsonomy was – it certainly didn’t look like a campus setting. But by the time we passed the Bong Rec Area, I was snickering about that instead.

When I found out that local director Ryan Sarnowski was debuting a documentary about Merle Hayden – a man who devoted his life to Lawsonomy, once lived on the land in Racine County and erected the sign – I knew I would be at the premiere, front and center.

The 95-minute documentary called "Manlife" – which premiered at the Milwaukee Film Festival on Saturday – does an incredible job of telling a rather involved story in a pleasant and coherent way. "Manlife" allows us to tag along with Hayden, a peaceful man of passion and purpose, as he spreads the word and curates what seems to be a massive collection of newspapers, flyers, books, recordings and other physical archives about Lawsonomy.

Lawsonomy is a concept, a way of life, maybe even a religion or cult, founded by Alfred Lawson, a self-taught man who started out as a major-league baseball player and was later an aviator, economist and philosopher.

Lawsonomy, a combination of personal health, religion and economics, was based on what Lawson called "natural laws." Among these many laws: if man will act right, he can have knowledge; character is formed by unselfish acts; and God permits inactive creatures to perish.

Lawson also believed money should be freely distributed to the people by the government. During the Depression, this notion (known as "direct credit"), was embraced by penniless Americans across the country, but after the economy improved, many of the members of Lawson's Direct Credits Society returned to supporting traditional capitalism. Lawson retained some followers of his more esoteric personal philosophy.

Hayden, however, never wavered in his commitment to Lawson. For more than 80 years, he lived his life by the principles of Lawsonomy and continued his attempts to recruit new members. 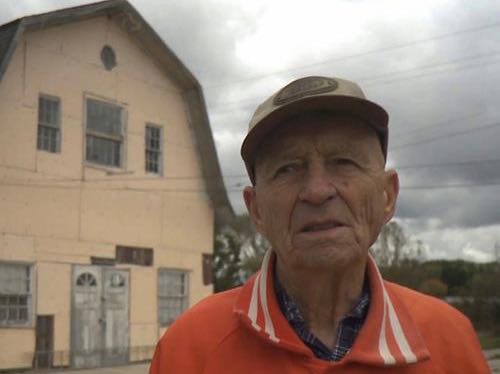 Every year, he attended the air show in Oshkosh to share information about Lawson’s contributions to the aircraft industry, which were many, and Lawsonomy as a lifestyle.

Although Hayden found few like-minded individuals at the air show – on camera, they seem courteous or mildly interested at best – he does meet friend Jim Newman, a much younger man who helps him set up and operate his booth.

"Manlife" also chronicles Hayden’s relationship with his high school sweetheart, Betty Kasch, with whom he reconnected on Classmates.com when they were both 80 and after Margie, fellow Lawsonomist and Hayden's wife of many years, passed.

Kasch is not a believer in Lawsonomy, but she attends the air show with him a few times and tolerates his lifestyle – but really just wishes he would move full-time with her to Florida. Kasch, who has passed since the filming of "Manlife," adds warmth and humanity to Hayden’s life as well as the film.

Although Hayden is kind to Kasch – and spoke highly of his deceased wife – his first love was always Lawsonomy.

It would have been easy for "Manlife" to portray Hayden – who passed away this summer – as an extremist or a kook, but that never happens. His intelligence and wit is highlighted enough to see him as a rational-thinking man. Plus, in light of a world teeming with hate, violence and apathy, Hayden comes off a harmless hero, a man who did not have children and yet was determined to make the world a better place for future generations.

"Manlife" screens as part of the Milwaukee Film Festival on Tuesday, Oct. 3 at 6:30 p.m. at The Times Cinema and Thursday, Oct. 12 at 1 p.m. at the Oriental Theatre.