Unlike the headline of this story, Matt Cook's latest book of poetry, "Irksome Particulars," does not include a single rhyme. Phew.

Unlike the headline of this story, Matt Cook’s latest book of poetry, "Irksome Particulars," does not include a single rhyme. Instead, Cook offers exactly 100 short, succinct prose poems – witty and insightful snippets – that for many are part of the human experience, but probably not identified until now.

"That’s the hard part, I suppose, how do you transform your daily experience into art?" says Cook, who served as Milwaukee’s Poet Laureate from 2015 to 2017.

"Irksome Particulars" is Cook’s fifth book and he spent three years writing it. The poems read with such ease it seems as if they floated into his head, fully formed, but in reality he spent years crafting the right words.

And snap they do, although Cook’s poems are far from flip. They are short but powerful, leaving the reader chuckling, nodding, wondering or distressing.

An example of chuckling

"Sometimes you scroll past an unreadable
article about injustice to instead savor
the obituary of a gruff but lovable
character actor."

This poem speaks to anyone – all of us – who’ve scrolled through Facebook and clicked on fluff instead of weightier or more heartfelt material. We can’t help ourselves. Cook realized this and made an abstract action suddenly very tangible – and funny.

An example of nodding

"You begin to think you’re living in the
Golden Age of Minor Acquaintances One
Tries To Avoid on the Street."

Residents of "Smallwaukee" know that sometimes – or more than sometimes –we just don’t have the desire to chitchat with someone we barely know. The longer we live in the same place, the worse this becomes. More and more people look familiar or are actually people we’ve met once or twice, maybe even chatted with in a bar, yet we have zero interest in conversing with them. Another mood, another day – perhaps. Perhaps not.

An example of wondering

Sometimes you talk to a customer service
representative in such a roundabout way
you end up telling him what you were for
Halloween.

Although this experience is one most of us probably didn’t have, it doesn’t matter because, well, it’s hilarious. It also makes us wonder how he got to the place with a stranger on the phone that inspired him to reveal his Halloween costume. Furthermore, what was it? Creepy clown? Sexy plumber? Bedsheet ghost?

An example of distressing

You’re aware that weather patterns gen-
erally moved from west to east. You’re
aware that the progress of human civiliza-
tion generally moved from east to west. It
occurs to you, therefor, that civilization
foolishly, advanced into the wind.

These six lines remind us, gently and yet forcefully, that we’re doing it wrong. Completely and utterly wrong, since the beginning of time and it’s never going to change. This poem feels both tragic and soothing because it reminds us at least there are other people moving through life, walking straight into the wind, but dreaming of a different path.

"I’m pretty sure I’m talking to myself, but I’m hoping the poems speak to the outside world," says Cook. 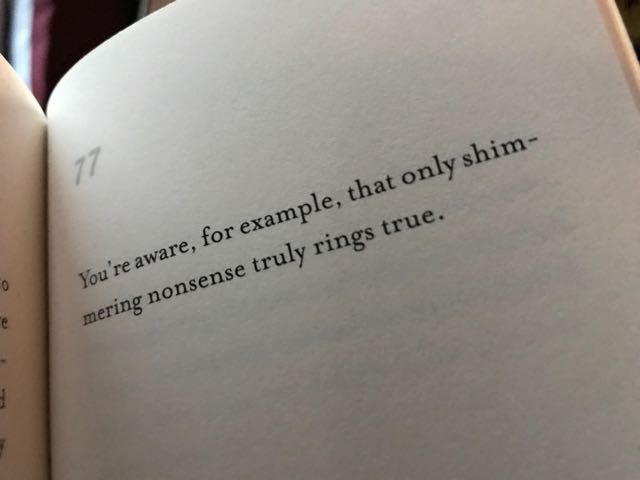