Food, by its very nature, tells a story. Vegetables tell the tale of the soil in which they are grown. Family recipes relay food traditions passed on from generation to generation. In kind, Mazorca - a new taco truck in Walker's Point - tells a story through tacos.

Food, by its very nature, tells a story. Vegetables tell the tale of the soil in which they were grown. Family recipes relay the stories of food traditions passed on from generation to generation. And when chefs create menus, their dishes weave yarns about where they’ve come from and what they’ve experienced.

In kind, Mazorca – a new taco truck that’s made a home base at South 1st Street and West Pittsburgh Avenue in Walker’s Point – tells a story through tacos.

Mazorca owner Jesus Gonzalez was born and raised on Milwaukee’s South Side. His parents came to the U.S. in the mid-70s from a small farming community in the state of Jalisco, Mexico. And, Gonzalez says, he was brought up in a culture that valued food, as well as the stories it told.

"Food was always central to our lives," he says. "It was a means of communicating with one another. When I was growing up, my mother and grandmother made tortillas for us on the weekends. They grew up in poor families where they ate simple food: tortillas, beans and maybe cheese made from their cows. And they made tortillas by hand because it reminded them of where they were from." 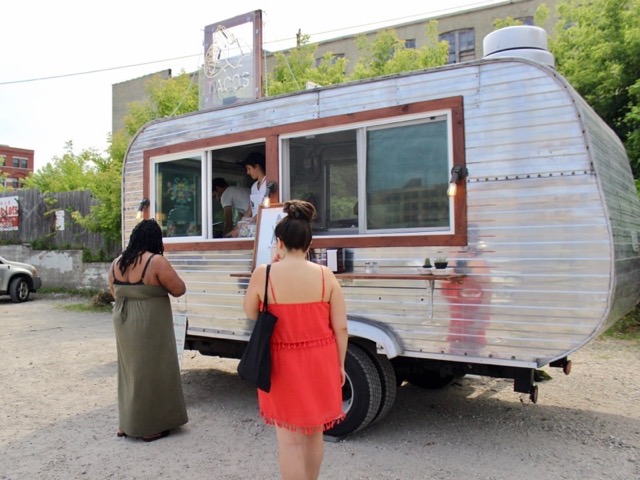 So, it only made sense that, as Gonzalez began thinking about his future, he turned to food for inspiration. He took on work in some of Milwaukee’s best kitchens, including Cubanitas and Coquette Cafe. He staged at Sanford. And he talked to chefs about their experiences, gleaning advice along the way.

"When I was 17, I interviewed Juan Urbieta [of Ristorante Bartolotta]," he says. "I was looking for wisdom, for advice about what I needed to be successful in the restaurant industry."

Once he graduated from high school, Gonzalez told his parents he was moving to New York. At the time, his siblings were attending college at Marquette University, and his parents wanted him to stay home. "But I knew what I needed to do," he says of his decision to attend the Culinary Institute of America in Hyde Park.

Six years later, after earning his degree, interning in the Basque region of Spain, traveling to the Sichuan province of China and landing a job in New York as a restaurant consultant with Chipotle, he says he knew it was time to move back home.

He returned to Milwaukee last February and set his sights on launching a food truck. With the money he’d saved he bought a 1950 aluminum Ball trailer on Craigslist and converted it into a kitchen. From there, he worked with Michael Cerda, a South Side artist, to create the logo for Mazorca, a word which refers to the corn that’s been cured on the stalk in preparation for making it into masa. Glass artist Tom Galbraith designed the neon sign that sits atop the truck.

"It was my turn to tell my story," Gonzalez says. "And as I thought about how to do that, I wanted people to understand what I represented. There aren’t a lot of people in Milwaukee who are really telling my story. As Mexican people, we always have other people telling our stories, and I wanted that to change."

Tacos with a tale

In turn, the Mazorca menu has become Gonzalez’s story. And it all begins with the tortillas.

"We make the corn tortillas ourselves," he says. "It’s only the poor in Mexico who make their own tortillas because they can’t afford to buy them. And that story is one my mother and grandmother shared with me. In that way, it’s simple food that tells the story of humble beginnings."

Gonzalez says he’s been inspired by the work of Chef Dan Barber, who has pushed beyond the farm to table movement to strengthen the connection between ingredients, the way they’re grown and the flavors they produce.

"In the beginning, I hoped to find a way to source corn locally for making tortillas," he says.

He reached out to a farmer in Lake Geneva, who walked him through the process of what it would take to work together to plan out a corn crop for the following year. He also began working with the Culinary Breeding Network, an organization whose members are engaged in developing and identifying varieties and traits of culinary excellence for vegetables and grains.

"The goal," he says, "Is really to be able to eventually source corn for our tortillas from plants that are native to Wisconsin."

For now, he’s using masa produced by El Rey to make tortillas on the truck, each one hand pressed and griddled to order.

Among the four tacos on the Mazorca menu is the al pastor made with adobo marinated pork that’s cooked on a trompo and crisped on a flat-top grill. It’s topped with avocado and cilantro salsa and served with a slice of pineapple on top. ($2.75).

Bistek features thinly cut sirloin that’s been marinated in beer, cumin, garlic and onions before being seared and piled on a tortilla with housemade frijoles de la olla (white beans cooked in broth with aromatics), tomatillo salsa, onion and cilantro ($2.75). "In Mexico this is a really authentic way of serving a bistek taco," he says. "It’s simple, but so good." 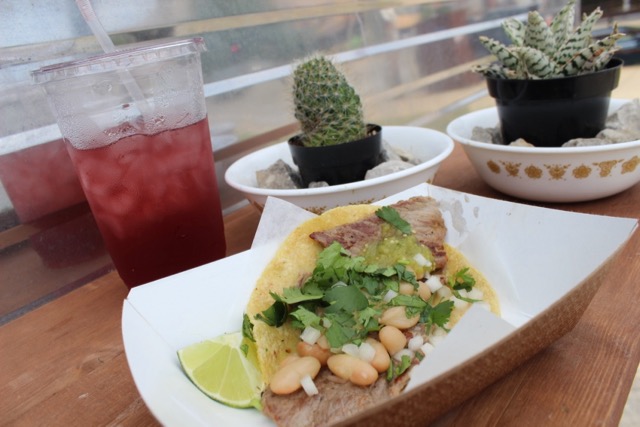 Birria is made with pulled beef that’s been braised in an adobo featuring ginger, chocolate and sesame seeds. The liquid from the braise is reduced to make a sauce that’s served atop the taco along with pickled red onions and cilantro ($2.50). 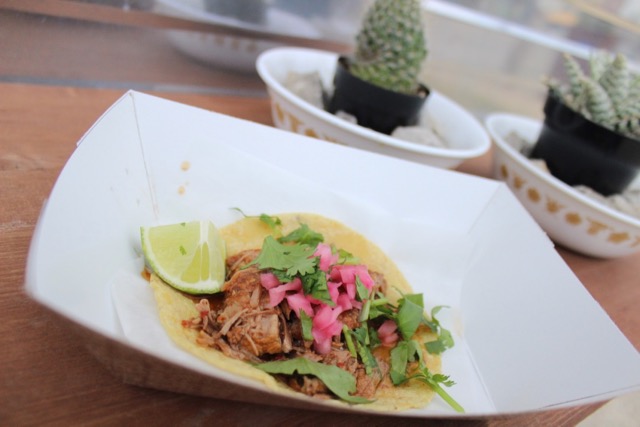 A vegetarian taco features Muenster cheese ("I just love Muenster," says Gonzalez), which is melted and topped with guacamole, tomatillo salsa and cilantro. The same taco can be made vegan when the cheese is subbed out for beans ($2.50). 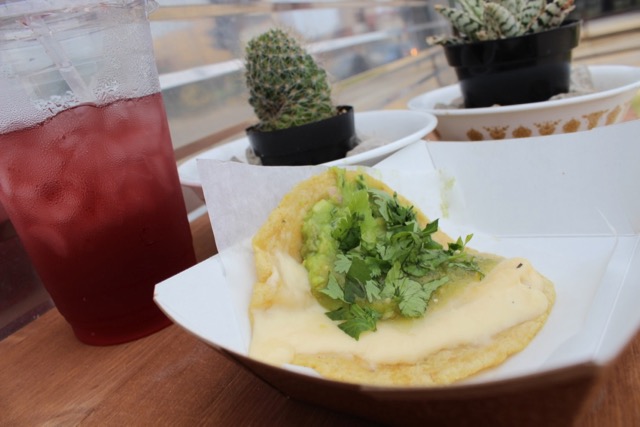 The truck also offers chips and guacamole ($4), along with housemade hibiscus agua fresca and horchata ($2.50/$3) and Mexican sodas including Coke and Squirt ($3).

"Every now and again, someone will ask me if the food we serve is ‘authentic,’" Gonzalez says. "And my answer is this: It’s authentic to me, a Mexican who grew up in Milwaukee. It’s my interpretation, my story."

Gonzalez says that for him the food truck is just the beginning. Some day, he says, he’d love to own a brick and mortar restaurant. In the meantime, he foresees expanding Mazorca’s offerings, particularly the vegan and vegetarian options. "I have so many ideas I want to share with Milwaukee," he says. "But, it’s going to take time."

At the forefront of Gonzalez’s goals, however, is to represent his culture and ensure that his story becomes a part of the evolution of the Walker’s Point area.

"I love what’s going on in Walker’s Point," he says. "There are so many great new restaurants, and there are a lot of eyes on the area. But this is our neighborhood. And we need to have a place in that development. My hope is that Mazorca plays a role. This food truck is not for me. It’s for the community."

Mazorca serves tacos Monday through Thursday 11 a.m to 10 p.m. and Friday and Saturday 11 a.m. to midnight. Customers who’d like to place an order for pick-up can call (414) 550-7644. You can also share in more of the Mazorca story by following them on Facebook and Instagram.