Eat and drink on the cheap with MealSteals app

Half off at Riverwest Pizza on Mondays? Free lunch at Old German Beer Hall when you buy a beer? Those are deals you can expect from the MealSteals app, a new tool which helps users discover places to eat and drink while saving money at the same time.

Half off everything at Riverwest Pizza on Mondays?

Free lunch at Old German Beer Hall when you buy a beer?

Or how about free golfing at Fore?

Those are the sorts of deals you can expect from the MealSteals app, a snazzy new tool which helps users discover new places to eat and drink while saving money at the same time.

MealSteals currently offers users free access to deals from over 100 area businesses, including food trucks, bars and restaurants. Deals can be anything from happy hour offerings, events, daily or weekly specials, or even "flash deals" which are only available for a limited time. The app also features exclusive deals only available through MealSteals.

Milwaukeeans Ben Bourgeois and Brian Kopp are the masterminds behind the free app, which they say was built for "spur of the moment decisions."

"In the end, we built this for us," notes Bourgeois. "Both of us have inconsistent schedules, and we’re indecisive. I can’t tell you how many times when I’ve been sitting with my friends, and nobody knows what we should do. But the app actually shows us all the places we could go and the things we could do."

"Most happy hour apps pull specials off of the web," notes Bourgeois. "But we hand the keys over to businesses and let them control their own accounts. That gives us a higher level of accuracy as well as offering the restaurant more flexibility to create special deals."

Once they have an account, businesses also don’t need to wait for their deals to become active.

"The app also functions in real time, so once a restaurant puts a deal in, it goes live immediately," Bourgeois explains. "So there’s no waiting. There’s nothing stopping a savvy business owner from posting new things every day or multiple times a week. They can experiment."

Logging into the MealSteals app at 2 p.m. on a Monday offered up food deals from nearly 20 restaurants and bars. There were drink specials, happy hour offerings and even lunch deals. And many were at venues I that wouldn’t necessarily be on my regular radar.

Even better, the app gave me a variety of ways to look for deals. Using "map view," I was able to access all the deals within 15-20 miles of my current location. I could also see those same deals as a simple list or filter down to access all food or beverage specials. And for each deal, I could see how much longer it was available.

Take for instance, this deal from Transfer Pizzeria. 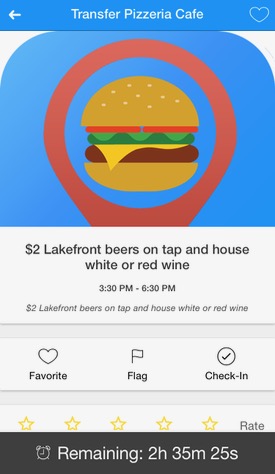 A few days later, I logged on closer to 4 p.m. and found offers from over 60 different venues, including Burnheart’s, Camino, The Irish Pub, Sake Tumi, Hi-Hat and McBob’s.

Clicking through to various bars and restaurants, I was also able to see all of their listed specials, even those for other days of the week. Even better, I was able to mark certain restaurants as "favorites" so I could access their deals more quickly and easily. 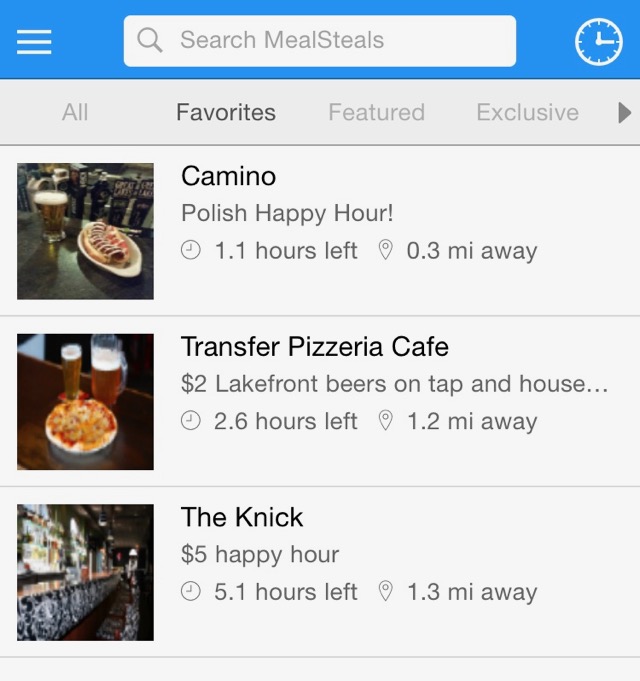 The app defaults to "real time," which means you can view specials that are happening in the moment. However, I also discovered you can change the time setting so that it views deals up to eight hours in the future, making it easy to plan an outing with friends later in the day.

And redemption? Well, typically I’ve found it’s just a matter of showing them the page on the app.

Bourgeois says they’re constantly looking at improvements for the app, particularly those which create a better experience for users. He says one of the next updates – which could launch within the next month – will be push notifications for deals from places users have identified as favorites.

"Because you can favorite particular spots, it keeps the app from being overly intrusive, since you won’t get notified about spots unless you have favorited them," he notes.

He says the goal is to keep the app fresh and fun. So they also hope to be able to add spiffs for users who regularly redeem offers found on MealSteals.

"From the beginning, we’ve wanted to gamify the app to make it more fun for users. So we’re looking at ways to award points to users for checking in at various spots," he explains. "And then, the idea would be that they’d be able to redeem those points on our web site or app for swag or gift cards from area establishments."

On the eternal quest to stock up on Buffalo Trace? New app oughta help