Just across from the vacant, Milwaukee County-owned space on the corner of Old World 3rd Street and Juneau Avenue, the Menominee Tribe and Hard Rock International held press conference in the Aloft hotel to commit $220 million to a Downtown arena project that would house the Milwaukee Bucks. If...

Just across from the vacant, Milwaukee County-owned space on the corner of Old World 3rd Street and Juneau Avenue, the Menominee tribe and Hard Rock International held press conference in the Aloft hotel to commit $220 million to a Downtown arena project that would house the Milwaukee Bucks. If, their plan for a Kenosha casino is approved.

On Jan. 23, Gov. Scott Walker rejected a plan by the two groups to establish a casino in Kenosha. Four days later, Walker proposed $220 million, spread over 25 years in "jock tax" funding for the new multi-purpose arena.

On Feb. 3, Walker proposed his budget to the state legislature, including the money to be funneled to the arena project, and met with stiff opposition.

Menominee Indian Tribe chairman Gary Besaw and Hard Rock International chief executive officer Jim Allen said this is where their project comes in – notably because the duo said their initial proposal to the governor in October included a promise that 2.5 percent of gross gaming revenue would be paid out to aid in the broader economic development within the state.

Besaw said the language in the compact said the 2.5 percent would go into a trust to be used for public projects, and he and the tribe believe the construction of a new arena would fit that language. 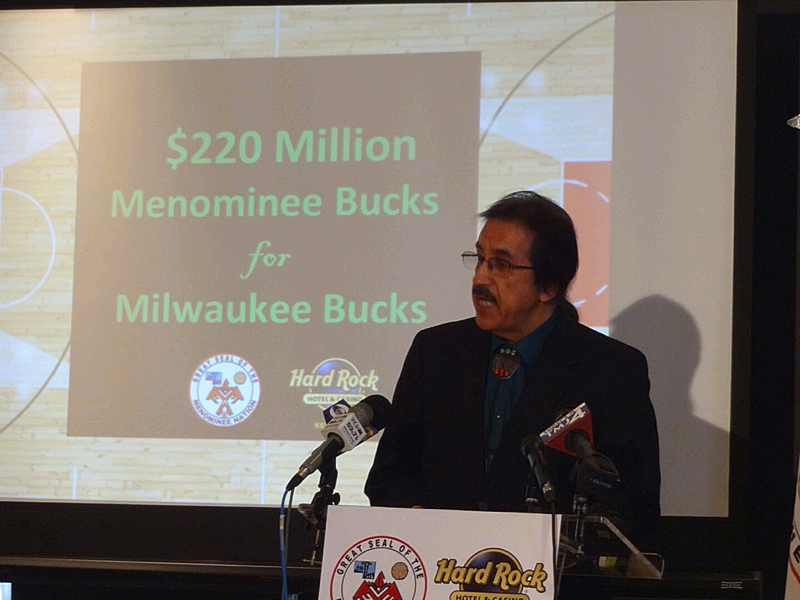 "In fairness, we’re not sure if the governor was aware of that – obviously we were dealing with staff members," Allen said.

"So, we don’t look at this as a bribe in any way shape or form. What we do know now is for this opportunity for the team to stay here was not as significant an item as it was back when we started these negotiations."

"We’ve seen the consternation with the original proposal by the governor, so we know they are looking for a way (to pay for it)," added Besaw, who believes project will garner support in Madison. "And we’ve seen it from both sides of the aisle. They say we do not want to use public, taxpayers money, on a private arena. So they come forward and they say that."

State Rep Robin Vos (R-Burlington), who supports the casino proposal and opposes the budget provision that would direct $220 million toward a new arena, issued a statement this morning in support of the plan, and distancing himself from Walker's decision.

"I commend the Menominee Tribe for not giving up on creating thousands of jobs in Racine and Kenosha counties. I continue to support the tribe’s efforts to get approval for the Kenosha casino. This proposal is an exciting opportunity and could be a win-win for everyone involved.

"However, even if you believe this proposal is a game changer, we must come to terms with the real possibility that the governor may never reverse his decision."

The Potawatomi tribe has long opposed a new casino in Kenosha, and is a major sponsor of the Bucks and the BMO Harris Bradley Center.

A person claiming to be a member of the Schreiber & Associates staff was in the lobby of the Aloft handing out a Charlie Sykes treatise on this idea as media filed out of the press conference. It was printed out at 8:07 a.m. on Tuesday and titled, "Menominee Arena Offer Likely DOA."

Allen and Besaw admitted that they had not talked to anyone involved with the Bucks ownership group about this plan, allowing only that they had "scheduled conference calls." Allen could not say whether or not the ownership group led by Wes Edens and Marc Lasry had even been briefed on it.

"We certainly respect the ownership of the Bucks not wanting to be in the middle of this particular conversation at this point," Allen said. "We looked at it as a potential challenge for the governor that we could be helpful to eliminate further burden on the taxpayers."

A message to Bucks spokesman Jake Suski was not immediately returned, although Bucks president Peter Feigin is scheduled to speak at 1:30 p.m. regarding a separate and unrelated Bucks corporate partnership.

There is no indication that Edens and Lasry have asked for this money, or that they would even want to be involved in such a deal brokered between the state, Hard Rock International and the Menominee.

Besaw also said the tribe would not seek primary naming rights to a new arena with this proposal.

No arena site has been determined yet, and in fact, no specific funding plan has been unveiled, either. What is known is that the Bucks owners have committed $150 million to the project, and former owner Herb Kohl has gifted $100 million.

The owners have estimated that a new arena could cost in the neighborhood of $500 million, and that some public funding will be required to make the project happen.

According to Besaw, Walker has until Feb. 19 to truly spike the idea of the casino in Kenosha. After that, Allen allowed that Hard Rock may shift its focus to land located in Illinois, and potentially northern Illinois.

Besaw and Allen admitted that they have not been able to meet directly with the governor and that a meeting is not scheduled.

"We received calls on Monday after the governor’s decision," Allen said. "(From) individuals and elected officials and specific real estate ownership in the state of Illinois.

"The major gaming companies, whether it be ourselves or Caesar’s or other companies (the media) have not talked about ... everybody understands the demographics are here. I believe that facility is going to be built, whether it’s on the Wisconsin side of the border, which we are sincerely here today hoping the governor will reconsider, or on the Illinois side of the border.

"But it’s going to happen. And this is the only proposal that backstops the taxpayers of Wisconsin and backstops the Ho-Chunk and the Potawatomi tribes. If people think that’s not happening, I can assure you, my opinion is, it will happen. Hopefully it will be on the Wisconsin side of the border."