Thanks to reader David Williamson sharing some postcards from his collection, we're featuring a mix of restaurants from southeastern Wisconsin as well as a mud baths lounge in Waukesha that has been back in the news recently. Enjoy this walk down memory lane.

In the past, I’ve shared some vintage postcards showing how our parents and grandparents enjoyed themselves in their Milwaukee, including at restaurants and at bars.

This time around, thanks to reader David Williamson for sharing some of these postcards from his collection, we’re featuring a mix of restaurants from southeastern Wisconsin as well as a mud baths lounge in Waukesha that has been back in the news recently.

Enjoy this walk down memory lane. 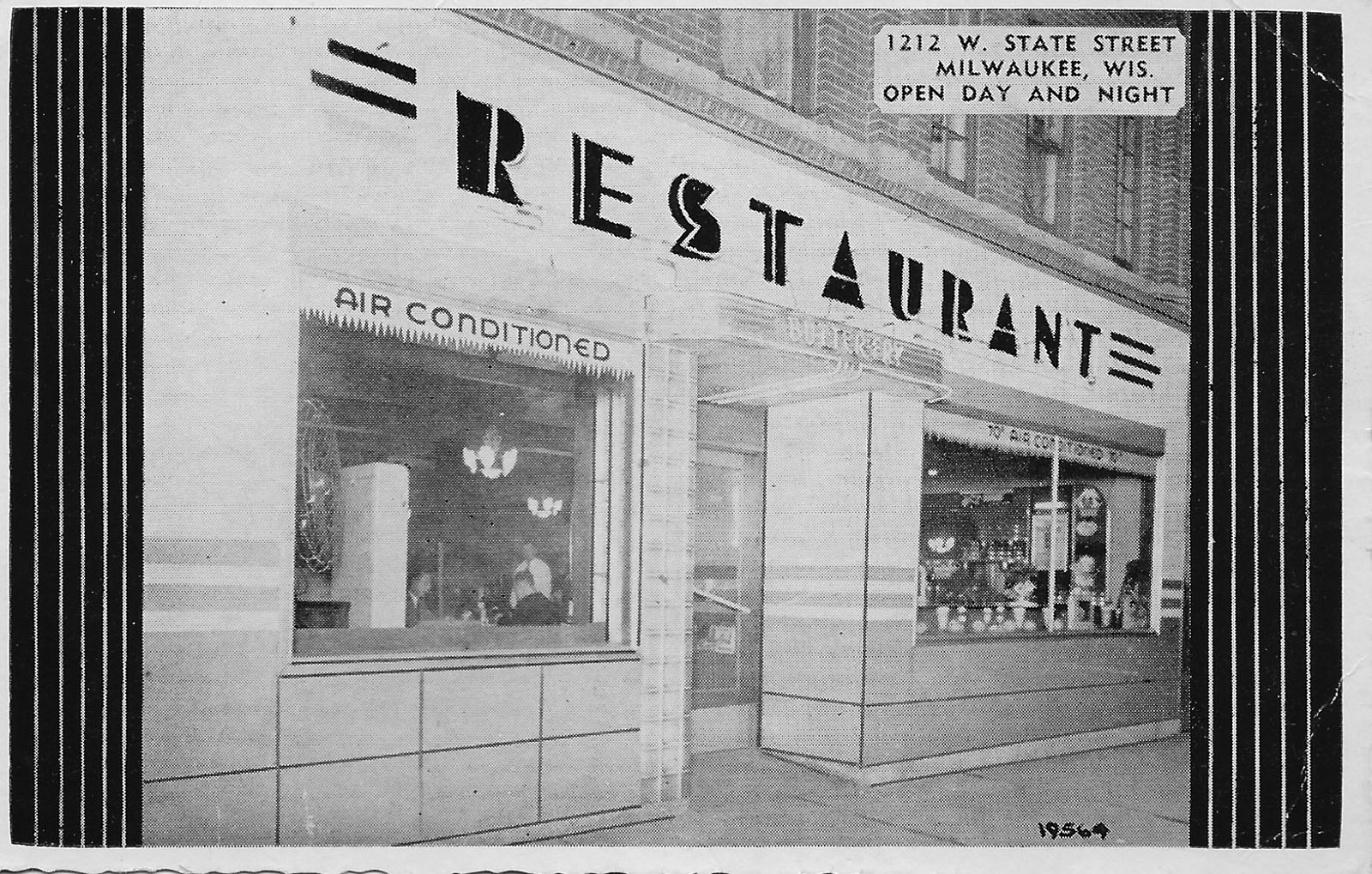 According to the flipside of this gem, "Mr. (Mike) Siegel, restauranteur (sic) for a generation, established the Butter-Fry in ‘31," and described the 16-booth, six-table restaurant – where "sea foods in season" were a specialty – as, "a cozy place where old friends meet. Bring the family here Sundays for turkey, duck and chicken dinners." Later, the restaurant – which survived into the 1970s – was run by George Copoulos. The building – which later housed the Lucky Spo, then the Old Cape Cod restaurant and Marquette bar O'Paget's – is now gone. 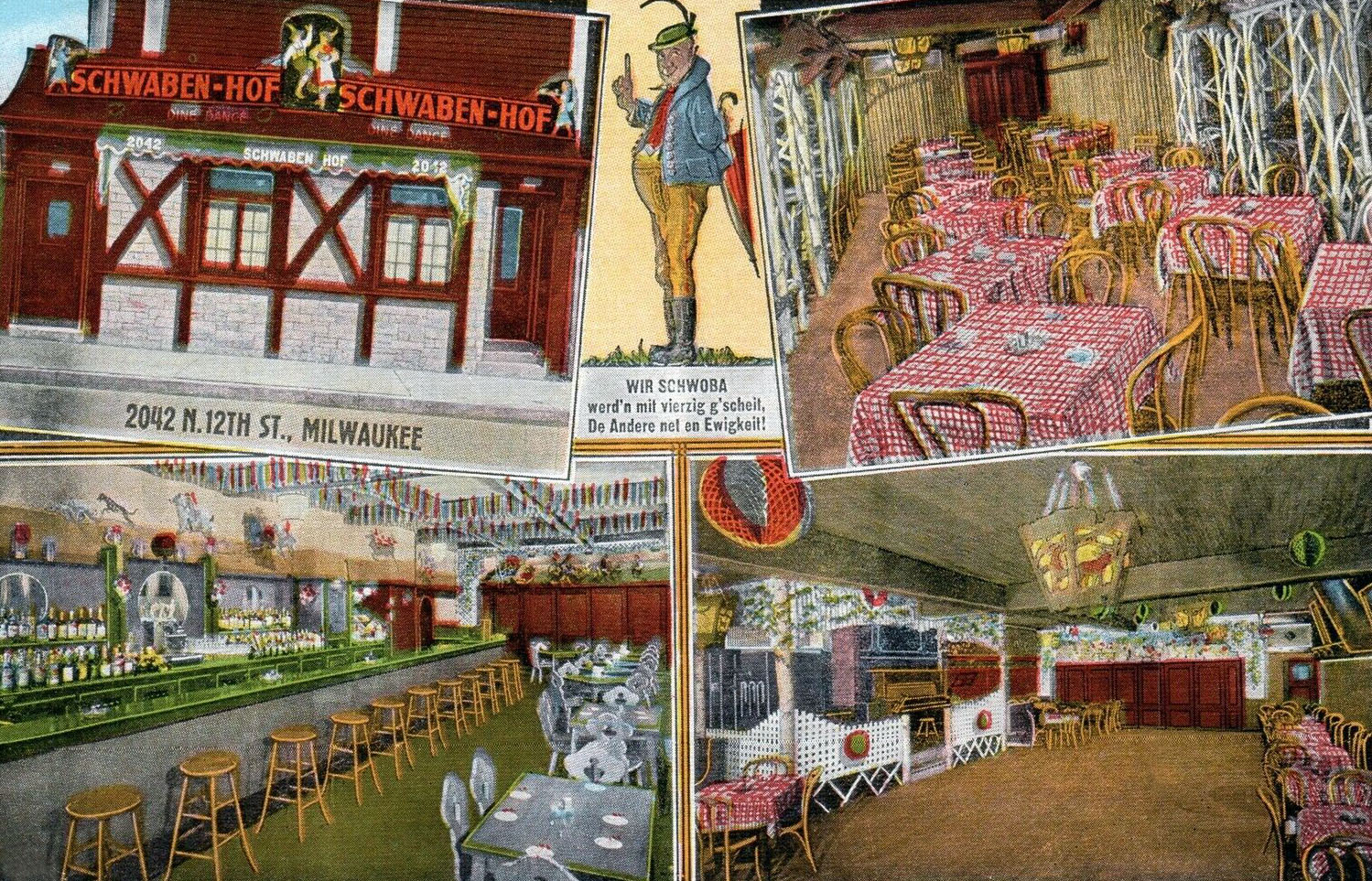 Now razed, the original Schwaben-Hof was on 12th and Lloyd. Thankfully, another version of the same same name survives plating up fish and chicken frys in Menomonee Falls. This card boasts, "we’ve a quaint little, funny little, pleasant little entrance hall that leads away from one one and into ours, and into serenity. Leave your cares outside. Your only worry will be which of our famous dinners you’ll want most. Pleasant lasses will serve you deftly, a dinner never to be forgotten." It closed in 1956 and the building – now demolished – was later home to the 2042 Club and then the O’Bee Funeral Home. 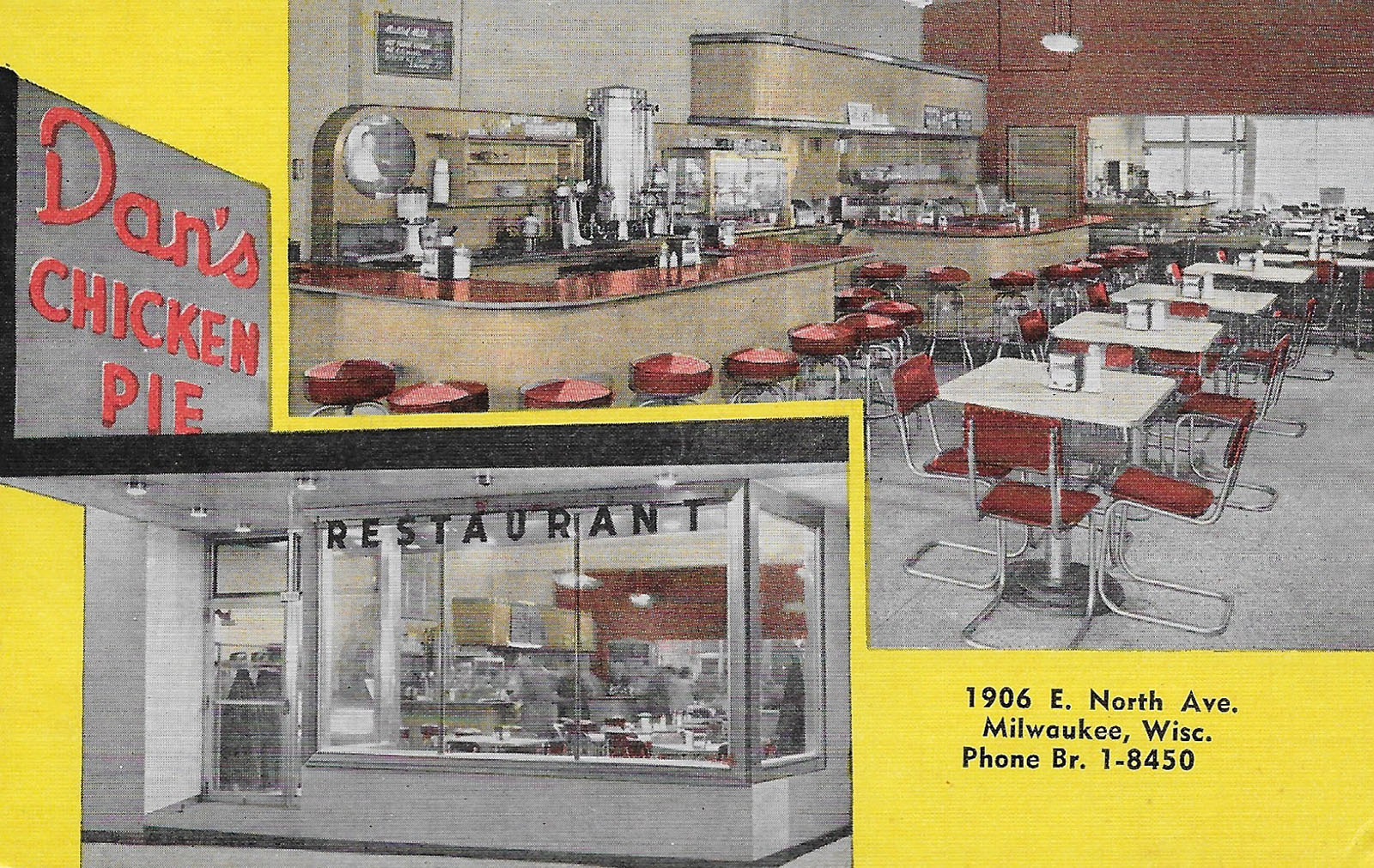 Long ago replaced by first one Milwaukee Public Library branch and then, more recently, another, Dan’s Chicken Pie looked like a gem of a mid-century modern restaurant with sleek chairs, formica tables and streamlined Art Deco influenced fixtures. Not only was the chicken pie a bargain at 35 cents, but, according to this card, it was, "open day and nite ... we never close."

What had been home to Riverview Market, Fred Matson’s butcher shop and Kustra’s Market in the 1930s gave way in the early 1940s to Dan’s Chicken Pie "modern" air-conditioned restaurant, which moved from its location around the corner at 2317 N. Murray Ave. Despite its name, it was owned and operated by Russian immigrant Dennis Bondar (aka Bondarenko) until his death in 1955.

"The restaurant was open 24 hours, and I think he worked it off of ACs Spark Plug, which was the UWM (Kenilworth) building, because it was going 24 hours," says Bondar's grandson Bernie, who owns Wolski's. "And then, when the '60s hit. He had started in the building where Palermo Villa was and then he bought that corner probably in the '20s.

"He was open a long time. Then AC Spark Plug closed, and fast food was coming in, Big Boy and all that, and so the restaurant was struggling."

Bondar's grandmother – a Wolski – did all the cooking.

"She did all the baking, she baked all the pies, she would clean the vegetables, and then, I learned, everything goes to the stock pot to make stock for the next day's soup. That was pretty neat.The Chicken Pie survived another six years or so before making way for the The Cove and then the library.

This postcard says, "You're making a BIG mistake if you don't try our delicious food. Said the members of the New York Opera Co., 'It's the best food in the whole country,' First a few members tried our food, then the entire case ate here during their three weeks (sic) Milwaukee appearance." 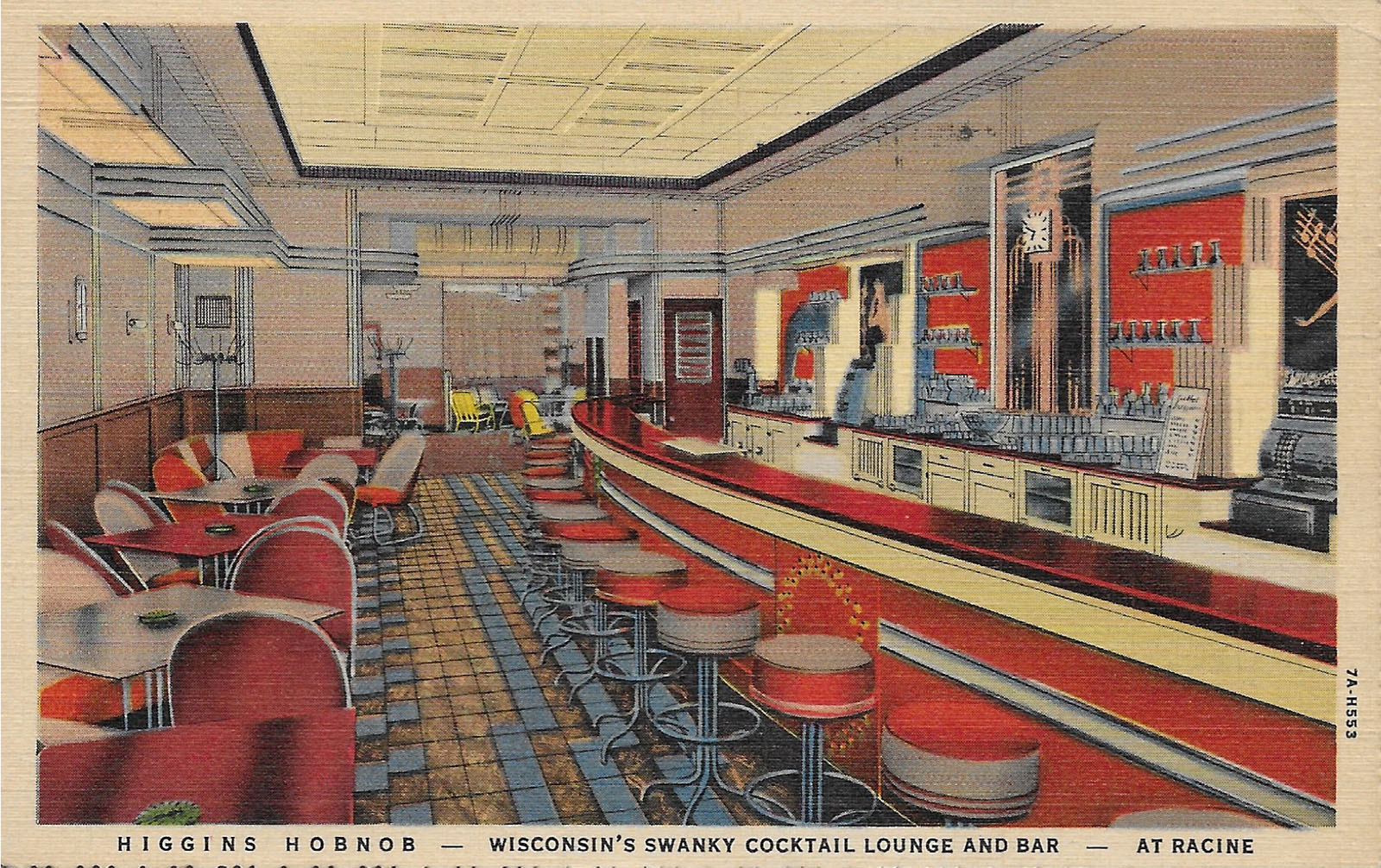 This late 1930s postcard shows the original Hobnob, run by Bill Higgins, and it was a gem. In 1954, the Hobnob became a supper club along the shores of Lake Michigan on Sheridan Road between Racine and Kenosha and that’s where it still operates today. 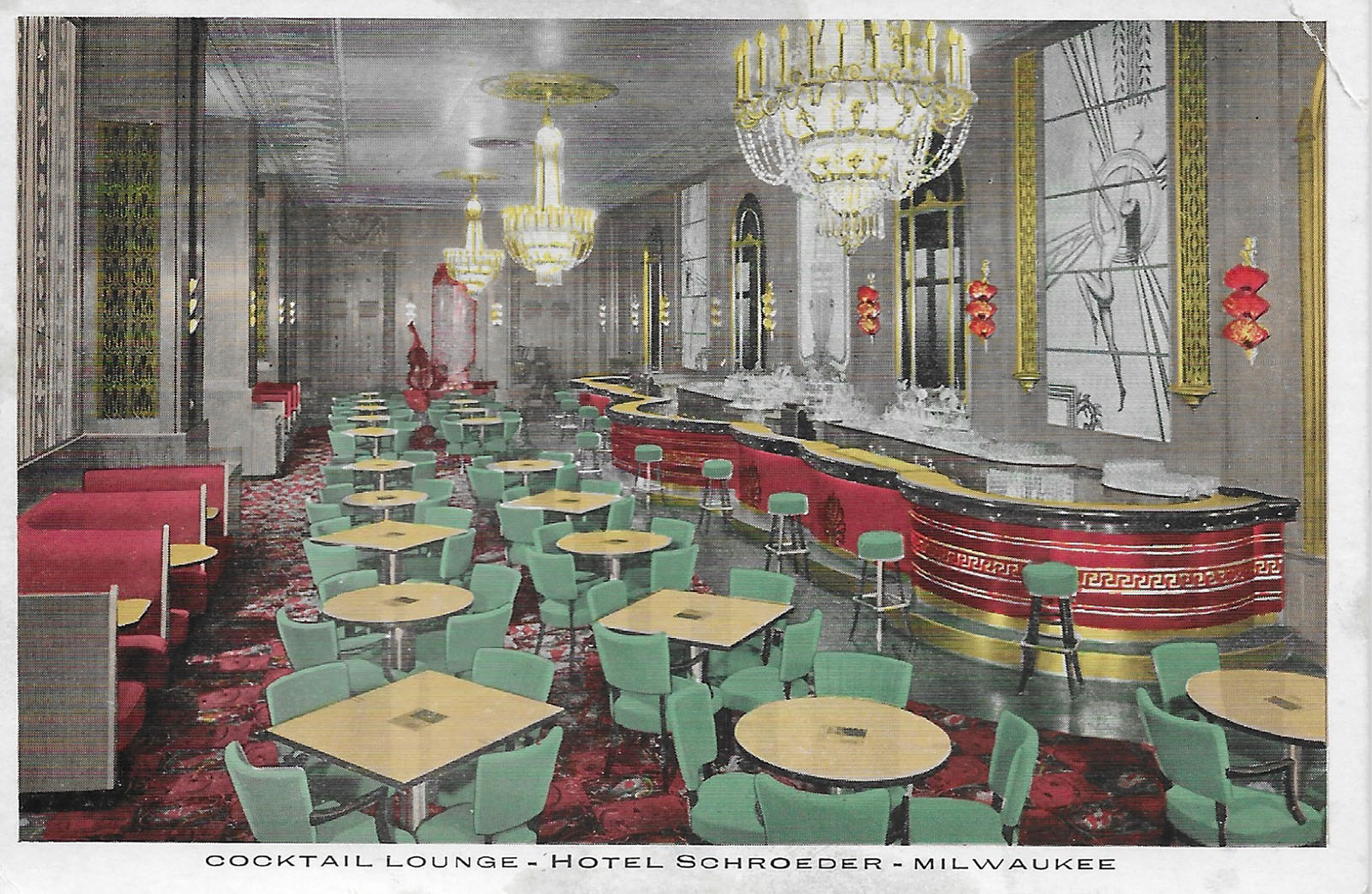 The hotel that magnate Walter Schroeder opened in 1927 became the Marc Plaza in the 1960s and has now long since become the Milwaukee Hilton City Center, which, thankfully, retains much of its original glory, as you can see in this Urban Spelunking story. The cocktail lounge survives up on the mezzanine, with its mirrors and chandeliers – part of what the postcard referred to as, "a quarter-million-dollar Empire setting – though, sadly, that 82-foot serpentine bar is now gone. 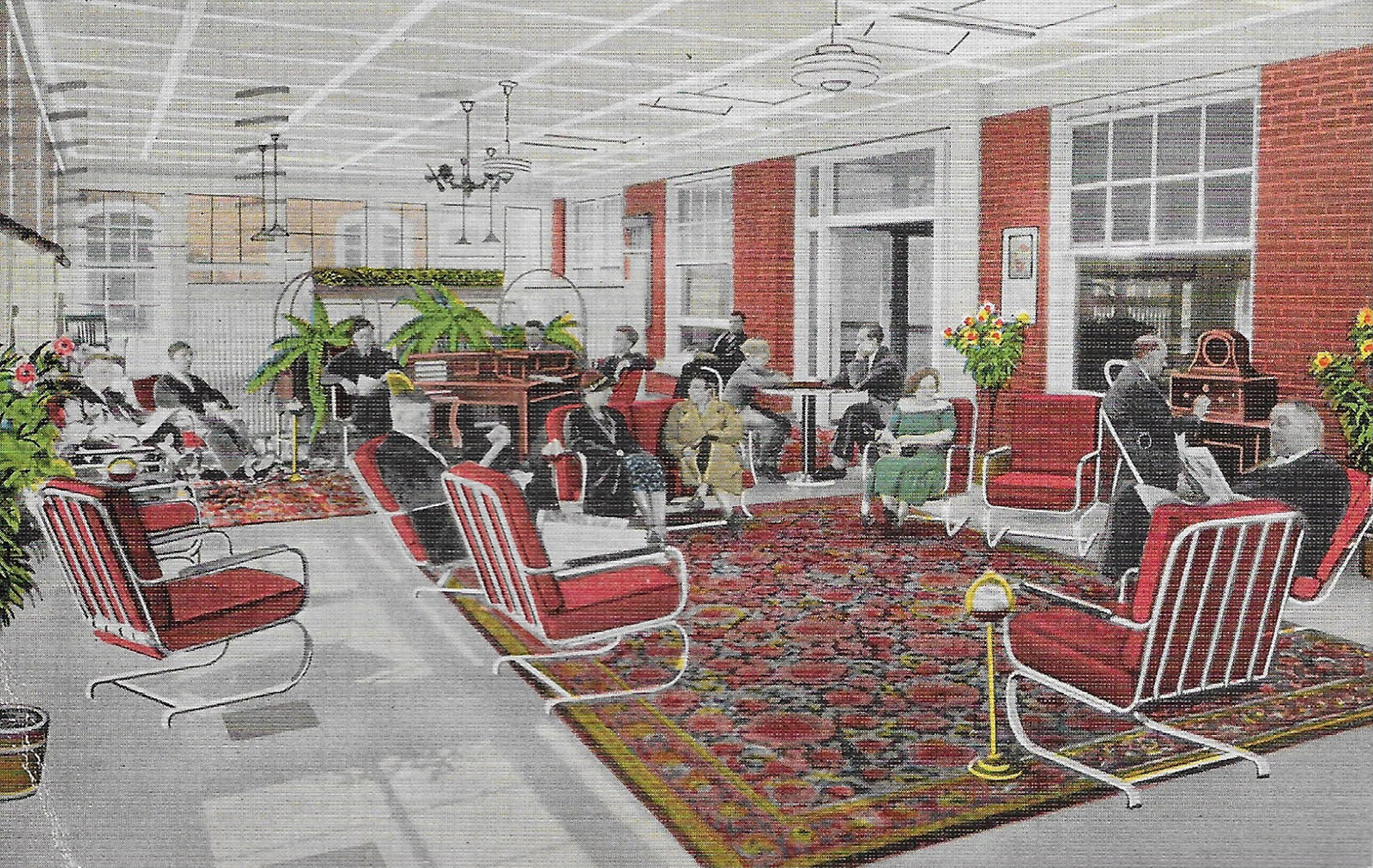 Waukesha was long known for the restorative powers of its supposedly healing spring waters, which led to the construction of resorts like the 200-acre, 150-room Moor Mud Baths in 1911, where folks would come to relax and take to the waters and mud in hopes of improved health. "All (rooms) with running hot and cold spring water," boasts this linen postcard. "Our bath departments are the most modern in the world. Our system is exclusive with us, as we control patents on the Weber Moor (Mud) Bath Couch (Capacity 24 Moor Mud Baths per hour)." In the solarium, folks could relax in the warmth of the sun and presumably, with a beverage of choice.

A few years ago, the baths building survived the threat of demolition but that threat has reappeared and there’s now a movement to save the building, which closed in 1961 (and became home to Mount St. Paul College). You can learn more about that the Save the Moor Mud Baths Facebook page.