You know him from TV and might even own one of his T-shirts, but David Gruber has done a lot more than you might know for Milwaukee.

When attorney David Gruber moved to Milwaukee in 1980 to attend Marquette University Law School, he describes his first experience as "a rude awakening" and "the biggest shell shock of my life."

Gruber, who was born and raised in New Jersey and got his undergraduate degree from the University of Delaware, showed up for his initial day of class in a T-shirt, shorts, flip flops and a bandanna tied around his head to keep his shaggy hair out of his eyes.

"I went to a large, liberal East Coast university for five years and then I walked into a relatively conservative law school where everyone was wearing a suit and tie, or at least a sports jacket," says Gruber. "My first thought was ‘Wow, who doesn’t belong here?’ And the answer was me. I had not done my homework. I had no idea what I had gotten into."

And yet, the whole law thing seems to have worked out OK for Gruber. And joking aside, over the past 40 years Milwaukee has become his home and the scene of his passions.

For more than 30 years, Gruber has owned and operated Gruber Law Offices in Downtown Milwaukee and thanks to his ubiquitous advertising campaign and "One Call That’s All" tag line, he's garnered local celebrity status.

"It (the ‘one call that’s all’ tag line) developed a life of its own. Who knew it would become something people say to me 100 times a week? Not me. People still send me videos of it being said in all different languages. Someone once told me it was the first words ever spoken by their child. This was never my intent, but it couldn’t have worked out any better," says Gruber.

Gruber owns the Wisconsin copyright to "One call, that’s all," but there are five other lawyers in the country who also legally retain the catchy line. "Pretty much all of us are good friends. In fact, in a couple of weeks, three of us will be together in California," says Gruber. "But I get phone calls and emails from well-intentioned friends and clients who tell me they were in Las Vegas or New Orleans and another lawyer stole my line."

Gruber Law Offices T-shirts have also become a pop culture phenomenon. Gruber says he’s received photos from all over the world, including China, Italy and tropical islands, of people wearing his company shirt. He says he’s easily printed more than 100,000 shirts and both clients and non-clients continue to request them on a daily basis.

"I’ve given clients checks so large you’d choke on the number, but they don’t smile until we give them the T-shirt," says Gruber.

But for Gruber and his clients, the cultural breeziness and presence of the slogan and the apparel are the only lighthearted aspects of what are usually very grim situations.

"What I do is the most serious thing in the world. Two days ago, I dealt with a case that involved a death. Before that, someone who suffered an amputation," says Gruber. "I meet a lot of really, really nice people under miserable circumstances."

Gruber says the majority of his clients were involved in car accidents and they need help navigating insurance claims.

"These insurance companies are not interested in paying anyone any money and most people don’t know what to do. They’ve gone through terrible sh-t and now they can’t work and don’t have a car and don’t know what to do. That’s where we step in," says Gruber. "We do things morally and ethically, but we go very hard. We represent people from every part of the city, every walk of life." 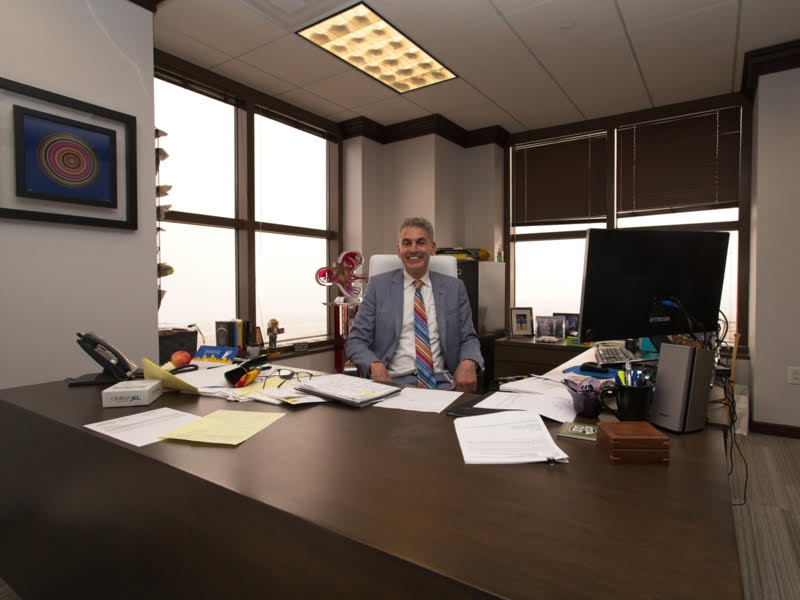 In his office, Gruber has numerous photos of his family – which includes his wife and son, who both personal injury attorneys at his firm – and his daughter, a physicians' assistant in the pediatric oncology center at Children’s Hospital of Wisconsin.

"She’s the one with the soul of gold, unlike the rest of us lawyers," says Gruber.

But Gruber is quick to speak highly of his son, too. "People say he’s a nicer, smarter and humbler version of his dad," says Gruber. "And I agree. I’m so proud of both of my kids. And of the many young people on our staff. I really love millennials in general. They have their own strength, their own way of doing stuff. We have to evolve. We have to try to change every day and be more flexible."

Gruber says it doesn’t require hard numbers or statistics to know that the over-focusing on cell phones has generated more business than most personal injury attorneys know what to do with.

"The carelessness and the recklessness has never been at a higher level. I attribute a great deal of it to the cell phone," says Gruber. "A lot of accidents happen  to people walking down the street, not paying attention. It's not just people behind the wheel. I kid you not, if you stood on the corner of Water and Wisconsin for eight hours and watched how people are walking and driving around, you would never want to leave your house again."

When Gruber isn’t working, he enjoys spending time with his family. He and his wife, Nancy, raised their family in Whitefish Bay and today live in Fox Point. "We love to go out," he says. "We love people. It’s who we are."

They also enjoy attending concerts – Billy Joel, Pink Floyd and Bob Dylan are favorites – and going to as many sporting events as humanly possible.

"I’m a Brewers, Bucks and Packers fanatic," says Gruber. "But I wasn’t always. Remember, I’m from Jersey – 10 miles outside of New York City – so I grew up wearing Mets pajamas and listening to games on my transistor radio. But the Wisconsin teams earned it. They grew on me pretty quickly."

Gruber played basketball in college and later coached little league and youth basketball. He still works out every day.

"It’s a cliche, but so much of what I have learned about the ups and downs of life came from sports," says Gruber.

The Grubers also contribute generously to numerous charities, including the MACC Fund, Operation Dream and numerous breast cancer prevention organizations. His mother, Bernice, fought breast cancer for 37 years before she passed away from the disease.

"My mother was a professional do-gooder. She volunteered for everything in our community and she passed that along to me and my sisters," says Gruber. "It’s a privilege to help people – especially kids. And that doesn’t just mean donations, that means spending time, too."

Gruber says at this point, he has no plans to retire, as long as he can continue to slip away for trips to Las Vegas, New York, Nashville and Charleston. "I love to travel and to take time for family and sports, but I really don’t think I’m the retiring type," says Gruber. "It took me a while, but I finally learned how to behave in public."