Meet the East Side's Julie Krawczyk, a programmer by day and cat and kitten saver by night. Julie is total All-Star material, giving everything she does 100 percent effort, and she tried to get a feline for the Milverine. 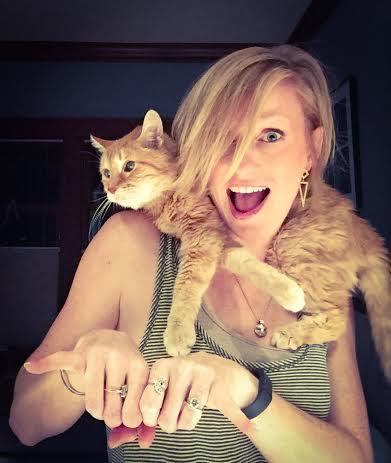 OnMilwaukee / Too Much Metal: What do you do for work and play?

Julie Krawczyk: My day job is writing code; I'm a computer programmer. That pays for my night "job" which is taking in and fixing up Milwaukee's homeless cats and kittens. I take them off the street, fix them up and flip them to new owners. Kind of like flipping houses only much dirtier, cuter and a negative income.

OnMilwaukee / Too Much Metal: What side of town do you live on?

Krawczyk: East Side for life!

Krawczyk: Because I'm good at it I guess. I know what to do when most people don't. When someone finds kittens / cats living in their neighborhood or under their porch – or strays – it's hard to know where to start. But I know the ropes now and I have a great network of resources and help, so now it's my gig. I help people to help the animals they find.

Besides that, though, it's rewarding of course. Turning some animal's life around and upgrading his / her situation, that's pretty cool. I get to see the life these guys get after I found them covered in flies, skin and bones, eating garbage, living in a junk yard, etc. I get to see photos of them lounging in some giant picture window seat or snoozing in a plush pink personalized bed or cuddled up sleeping on their 7-year-old human's neck. And I can remember where I found each of them and think, "you used to live in an abandoned garage, and now look at ya."

OnMilwaukee / Too Much Metal: What is your favorite or least favorite smell in Milwaukee?

Krawczyk: Least is whatever is under the 27th street viaduct. It smells like my cat's breath after she eats Fancy Feast. Nasty. It's a very odd smell to be in the air. Didn't think you'd get a cat-centric answer to that one did you?

Best is the smells of summer coming. The first grass cutting, the first neighbor's barbecue. Even the stinky beach air, because it means it's summer.

OnMilwaukee / Too Much Metal: What is your hope for Milwaukee?

Krawczyk: Well since this is an animal-related week, I'll say some of my animal-related hopes are coming true. I had schemed and hoped for a low-cost spay / neuter clinic in Milwaukee, and the Wisconsin Humane Society just opened one in July, so that's a dream come true. $75 per cat or $105 per dog. This will help a lot of lower income folks be responsible pet owners and fix their animals, hopefully cutting down on unwanted litters living as strays or entering the shelter system.

Our Animal Control agency (MADACC) was a mess, but it's improving steadily. It used to be that a stray cat entering MADACC had less than a 50 percent chance of getting out of there alive after their seven-day hold. It's still not perfect but now it's about 70 percent by my quick calculations. It's an upward climb but they're really working on it.

Also the Trap Neuter Return service for Milwaukee alley cats is now much less restrictive and anyone that wants to help their neighborhood cats can use it. If you have alley cats in your area that you want to help, WHS will neuter them for $25. Then they can return to their alleycat lives, but now with less procreation.

So I guess my hope is more trending in this direction. Better options for homeless and stray pets. More live outcomes in shelters and animal control, even for the weird ones, the mutants, the seniors. The better these organizations get at their jobs, the less I have to run interference to keep them out of there. Put me out of business, Milwaukee. That's what I want.

OnMilwaukee / Too Much Metal: What is your favorite season and why?

Krawczyk: Summer, no question. I like warm. I need at least eight more weeks of summer. I love how busy it is and seeing everyone out and about. Winter is hibernation. Summer is social. Polish Fest kicks it off. You haven't done Polish Fest unless you've done it with our crew of Polskas. I never miss Locust Street Festival. I look forward to Riverwest 24 probably the most. That's my holiday – I take off work and just get in there. It's such an infectious enthusiasm. I thrive on enthusiasm and try to surround myself with enthusiastic people if I can. RW24 has buckets of it. It really shows off what this city and the Riverwest neighborhood is all about.

OnMilwaukee / Too Much Metal: If you could high five one Milwaukeean, whom would it be?

Krawczyk: I saw a lot of other All-Stars say "Milverine" for this answer and I have the perfect, cat-related Milverine story! I once tried to adopt a kitten to Milverine. True story. I had heard through the grapevine that Milverine's cat had just died and he wanted a kitten. I thought, "My god, this will be my magnum opus if I can adopt a cat to the Milverine!"

Through the magic of Milwaukee connections, I actually got his phone number from Too Much Metal Fred. I called up Milverine but, sadly for me, he had already adopted a kitten. Lucky for that little kitty though. But maybe that kitty needs a buddy.

But If I could high-five some Milwaukeeans it would really be all the people out there doing stuff. Getting off the couch to help someone or something else. The folks that don't say, "I can’t because...." They say, "Hang on, I will think of a way."

Also, all of my wonderful kitten fosters, rescue friends and allies, and kitten socializers that keep my head above water. I have so many great people that jump in when I need it. Bringing food or litter, advising on illnesses or behavior, scooping and scrubbing, or just playing with kittens when I need a break. I'd be nothing without them. I would at least be very, very tired and grouchy without them. Thanks, guys!