Miracle, a Christmas-themed pop-up cocktail bar concept created by Greg Boehm in New York City in 2014, is back this November and it will appear at darn near 100 locations worldwide. One of those is The Tin Widow in Milwaukee.

Miracle, a Christmas-themed pop-up cocktail bar concept created by Greg Boehm in New York City in 2014, is back this November and it will appear at darn near 100 locations worldwide. One of those is The Tin Widow in Milwaukee.

This year, Miracle – which launches on Black Friday, Nov. 23, and runs through Christmas Eve – will bring back favorites like the Snowball Old Fashioned and Run Run Rudolph, as well as debut new recipes like the Christmas Carol Barrel.

"The growth of Miracle and the love that guests have for this concept has been completely amazing," said manager Joann Spiegel in a statement.

"Our partners across the world continually overwhelm us with their creativity and festive good spirits, and we can’t wait to see what’s in store for all of our locations in 2018." 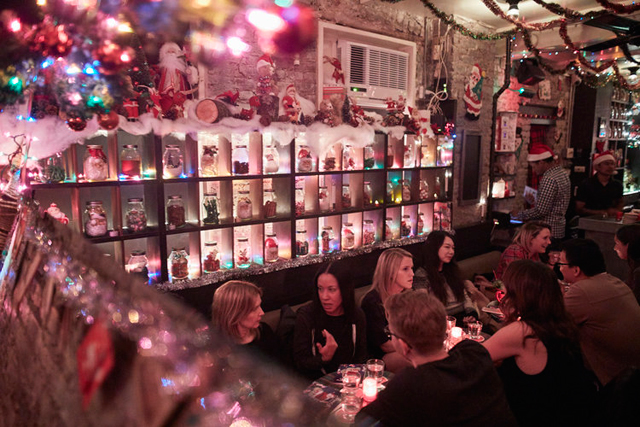 Spiegel, along with bartender Nico de Soto of Mace and Danico, created the recipes for the holiday cocktails on offer at all Miracle locations. A complete menu is below.

Boehm created Miracle when, at his mother’s suggestion, he stopped construction on a planned East Village cocktail lounge called Mace, to do the holiday-themed pop-up instead.

Miracle was so successful that by last year it had expanded to 50 locations, and this year there are more than 80.

All Miracle cocktails are served in custom Cocktail Kingdom glassware, from mugs to coupes, highballs and rocks glasses. At some venues, the glassware will be for sale and 10 percent of the proceeds will benefit Action Against Hunger.

Here's the Miracle cocktail menu for 2018: