If you want to know about fruitcake, just ask Sister Georgeann Krzyzanowski, Mount Mary University's resident fruitcake maker. She's been making the popular cakes for years, carrying on a more than 35-year tradition.

One of my favorite quotes about fruitcake comes from a Washington Post article from 2012 which relays the story of fruitcake-making monks at the Holy Cross Abbey in Virginia.

"Most people hate it because someone told them they hate it," says Ernie Polanskas, the monastery’s head fruitcake baker.

And I’m fairly certain he’s right. After all, a well made fruitcake is a delicious treat – a buttery sweet cake that’s spicy and rich and (if you’re lucky) soaked in spirits like rum or brandy. And yes, even a good fruitcake will tend to be heavy, but that’s largely due to the sheer amount of fruit each one bears.

Of course, if you want to know about the heft of a fruitcake, all you have to do is ask Sister GeorgeAnn Krzyzanowski, director of buildings and grounds at Mount Mary University. She’s currently the resident fruitcake maker, a job that’s been carried on at the university for over 35 years. 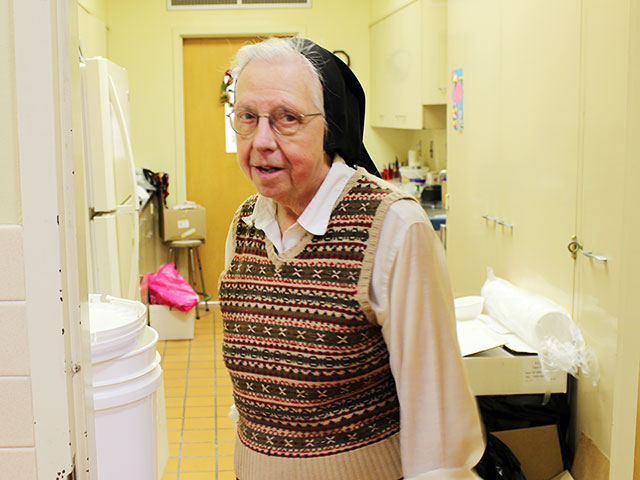 Sister Krzyzanowski, who just finished up the last of her fruitcake making last week, says she’s never been a baker. In fact, she says, she never did much cooking at all. However, all of that changed when she took a job as assistant to Sister Mary John Van Vonderen. Sister Van Vonderen was the first to bake a batch of Mount Mary fruitcake, a recipe she developed with the help of former College Food Service Director Tom Schmitz.

"She and I made fruitcake together for years," says Sister Krzyzanowski, "And then I took over after she retired at the age of 95. And since then, it’s just become a tradition."

The sale of Mount Mary’s fruitcakes has also become quite the fundraiser. In spring of 2008, $25,000 in accumulated proceeds from the sales of the fruitcake were used to endow the Sister Georgeann Fruitcake Scholarship, a scholarship which supports single mothers or returning students who are pursuing their degrees in education.

The recipe for the fruitcake – which is rich and moist and flavored with, not only pounds of fruit, but also almond paste – is a long-held secret. But we sat down this past week to chat with Sister Krzyzanowski, who pulled back the curtain (just a bit) on this holiday favorite.

It’s a near certainty that one of the things which makes Mount Mary’s fruitcakes so special is the fact that they’re made in small batches and kneaded by hand.

"The only thing mixed with a machine is the dough," says Sister Krzyzanowski. "But we knead in all the fruit and nuts by hand. If we made them in a mixer, we’d need a paddle as big as an oar. Each batch weighs at least 100 pounds."

But that heft is explained once you consider the ingredients, which Sister Krzyzanowski says each batch includes 40 pounds of mixed fruit, plus 15 pounds of raisins and nine pounds of walnuts.

And construction of the cakes includes particular attention to detail.

"One thing that takes the longest to do is to separate the raisins," notes Sister Krzyzanowski. "They come in a 30-pound box, solidly packed. And we separate them all, remove all the twigs and stray leaves. And then we soak them in a rum mixture. It’s a very sticky job." 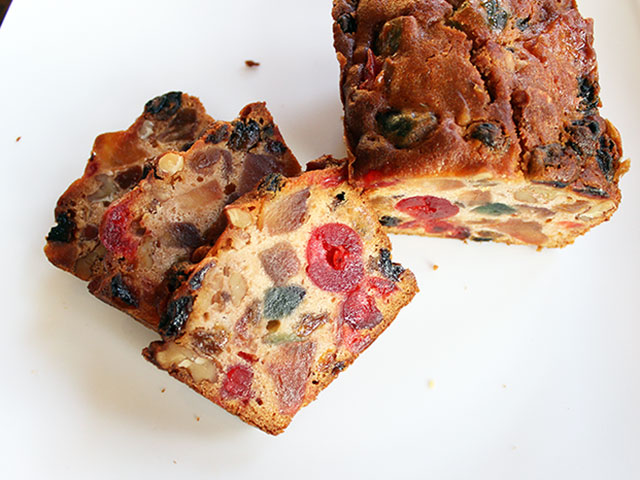 Tricks of the trade

Although Sister Krzyzanowski didn’t divulge too many of the secrets that go into baking the fruitcake, she did note a few very special ingredients, including "a brandy emulsion which is added to the dough to give it flavor."

And she’s learned a lot about fruitcake making over the years, some by trial and error.

"You have to leave the butter out overnight so it can soften," she says. "Trust me. One year, early on, I forgot. Have you ever mixed concrete? That’s what it was like."

There are also little details that seem to give the fruitcake its special character.

"The directions in the recipe say to bake the cake immediately," she says, noting that she never follows the directions. "But if you do that, it doesn’t have the opportunity to really gel together. If you don’t chill it, it just crumbles." 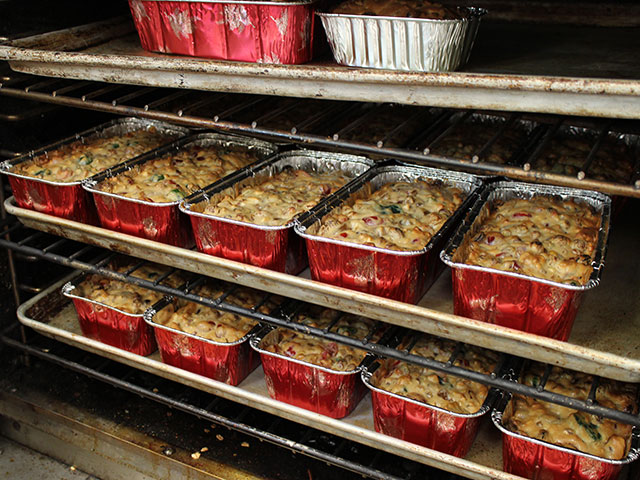 The most popular fruitcake around

"People have said that they do not like fruitcake, but they will eat this one," says Sister Krzyzanwoski. "It’s a dense cake, but very tender and enjoyable to eat. And people come back, year after year to order them."

One such customer is the nephew of Sister Ruth Hollandbach, former Mount Mary University president.

"Ever since she’s been gone, he orders twelve of them," she tells me, "And we ship them to him in St. Louis."

According to hand-written records kept by women who work the Mount Mary switchboard, fruitcakes have traveled to Arizona, California, Connecticut, New Mexico, Pennsylvania, Washington, Hawaii … and even to the Vatican.

And although she says she doesn’t keep track of exactly how many she makes, it’s rumored that Sister Krzyzanowski makes upwards of 700 fruitcakes per year.

"This year was a record year," she noted in 2015."I’m told we’ve never sent out this many fruitcakes ever before."