Fall offerings at MOVIDA showcase synchronicity between bar and kitchen

Cocktails have been historically overlooked as potential pairings for food. But in recent years, as craft cocktails have become a more popular choice for bar and restaurant guests, most quality bar programs have synced their operations to reflect a responsiveness to dishes on the menu.

When most people think of pairing beverages with food, they’re usually envisioning wine and beer. In fact, cocktails are often overlooked as potential pairings, relegated to before or after dinner options.

And there’s likely a good reason for that. Historically there’s been a disconnect between restaurant cocktail programs and the food that’s being served to guests. But in recent years, as craft cocktails have become a more popular choice for bar and restaurant guests, most quality bar programs have synced their operations to reflect a responsiveness to dishes on the menu.

One of those places is at MOVIDA, where the new fall cocktail menu was created specifically to be in tune with the flavors coming out of the kitchen.

"The kitchen and the bar really work together on every menu," notes general manager Cas Olejniczak. "The dinner menu will typically be designed before the cocktail menu, and then the bartenders incorporate flavors into the seasonal cocktail menu that really mirror the flavors of the dishes.

"Each individual bartender is really given options in terms of the cocktails they create. And then those are fine tuned and tweaked with Dan [Berres], our beverage director. That fine tuning is really what makes the cocktails as expressive as they are. And it’s all of what makes MOVIDA so beautiful."

"We start with cocktails we’re really excited about, and then we bounce ideas off of one another. It’s very collaborative, but we’re also able to show off our personal styles."

"We infuse the vodka with lapsang souchong black tea that’s been smoked with pine," says Yost. "The almond from the amaretto and orgeat balances the citrus and binds the drink with a bit of creaminess. For a winter-style cocktail, it’s pretty refreshing."

The cocktail is served on a plate with ignited lemon zest and tea, which provides an additional aromatic element. And it makes a great pairing for the empanadillas on the tapas menu, which contain cinnamon braised pork cheek and are served with a toasted cumin aioli ($12) 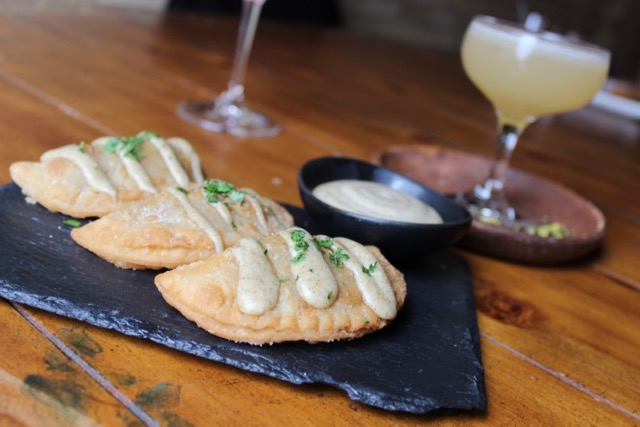 "The pork cheek is so tender and rich," says Yost. "The toasted cumin mimmicks the smoke in the cocktail while the citrus element adds a bit of acid to cut the richness of the dish."

It’s also a good match for the pulpo (octopus) served with grilled pineapple, confited fingerling potatoes, arugula and mojo picon ($13), or even the exceedingly popular skate wing that’s served alongside polenta and sofrito.

"The acidity and spice is a great match for the rich seafood," says Olejniczak.

The versatility of "The Comrade" isn’t unusual. In fact, Yost says they make it a point to create cocktails that aren’t disruptive to the dining experience.

The versatility of bubbly

"The drinks are built in such a way that the transition from food to drink isn’t a hurdle," he says. "You want dramatic flavors that are distinct; but we want cocktails that are really cohesive both as a group, but also with the food."

One of the super versatile cocktails on the menu is the Red Feather, a riff on the French 75 that uses Broker’s gin, lemon, orange, cranberry, Cava and Bittercube Blackstrap bitters to create a cocktail that’s both refreshing and reminiscent of the autumn ($9).

"It’s very indicative of Thanksgiving," says Olejniczak. "It’s also very versatile. And that’s a combination of the gin and the bubbles."

It’s delicious enjoyed alongside fried foods like the jamon or mushroom croquetas ($10/11), the empanadillas ($12). 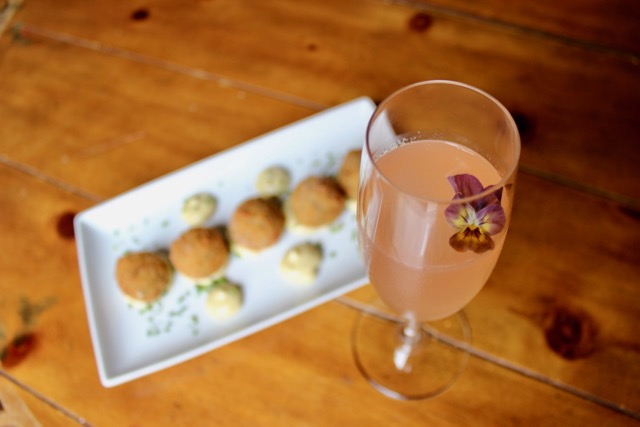 And even new fall desserts – like sangria crema with orange and berries ($6), pumpkin cheesecake ($9) and caramel apple bread pudding ($7) – find a match on the cocktail menu in the form of a creation called "Shot in the Dark" featuring Cruzan Silver and Blackstrap rum, lavender, espresso, orange, Warre’s Ruby Port, Aquafaba, Bittercube Corazon bitters and cocoa ($10).

The drink is sweeter and has dessert-friendly flavors like floral lavender, rich cocoa and bright orange which match up with both the fruit and spices in the desserts.

"It’s also somewhat interesting," notes Olejniczak, "Because it’s a cocktail normally finished with whipped egg whites. But, we’ve made it vegan by using aquafaba – the water from soaked chickpeas – for the cocktail."

Whipped aquafaba has long been used by pastry chefs as a substitute for eggs or egg whites, and it’s a technique that’s growing increasingly popular in bars across the city, particularly those with access to a kitchen in which chickpeas are used.

"The one thing that makes MOVIDA’s cocktail program distinct is how tight knit our team really is," says Yost. "We all have the opportunity to challenge ourselves. I’ve had the chance to really find myself through the drinks I create; and when that happens, it’s really gratifying. The names of the bartenders who created the cocktails is right on the menu, and we love it when we have the opportunity to either help guests decide what to drink or chat with them about what goes into the cocktail they’re enjoying."

MOVIDA is open seven days a week from 4 to 10 p.m.; it also offers happy hour all night on Mondays and Tuesday through Sunday from 4 to 6 p.m. You can view both the new cocktail and food menus at MOVIDA.com.