A new Milwaukee Public Museum would also be home to a new Betty Brinn Children's Museum thanks to a proposed alliance between the two Downtown facilities.

A new Milwaukee Public Museum would also be home to a new Betty Brinn Children's Museum thanks to a proposed alliance between the two Downtown facilities.

The Boards of Directors of both museums have both voted to collaborate to form an alliance that would allow a new facility to be home to both.

The Milwaukee Public Museum has been discussing the need for a new facility for a number of years.

"While the details of the alliance between MPM and BBCM remain to be ironed out, this marks the first critical step in what will be a years-long process to create a space where our community can enjoy two world-class museums under one roof," said Dr. Ellen Censky, President & CEO of the Milwaukee Public Museum in a statement late Wednesday morning.

"MPM has been working toward a new museum for several years now, and while we still need to finalize where that new museum will be located, we are thrilled that this alliance will enable Betty Brinn Children’s Museum to colocate in that space."

The two museums would remain separate entities, and the Brinn Museum would rent its space in a new building.

According to the statement, "MPM and Betty Brinn Children’s Museum will both benefit from being located in a new, custom-built space."

There has still not been a proposed site announced, though many suggestions have been floated, including adjacent to the Domes in Mitchell Park, the lakefront and the site of the former Bradley Center, among others.

In summer 2018, the museum released a series of theoretical designs and that December UWM architecture students even proposed a combined MPM/Brinn Museum on the site of the Marcus Center for the Performing Arts parking garage along the river (pictured below). 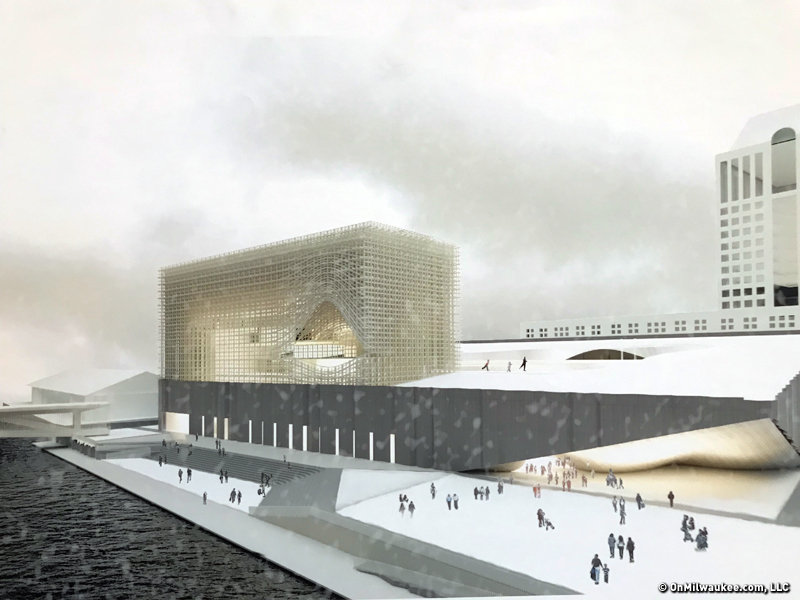 According to the MPM website, however, the museum is homing in on a site:

"MPM has narrowed its search and identified a potential site for its new museum, and this partnership will enable Betty Brinn to colocate in that new space. Due diligence on this site has begun to determine if it could support a new museum. Until due diligence is complete, and a contract is in place, we will not have additional information to share specific to site."

"We could not be more excited as we look to the future and see all the potential that this alliance with the Milwaukee Public Museum will mean," said Brian King, executive director of the Betty Brinn Children’s Museum.

"Colocating these two organizations will benefit our community by providing an even richer, more diversified museum experience for visitors of all ages, and making the visitor experience easier for families throughout Wisconsin."

The statement said that leadership from both museums will work together, "to determine the details of the alliance and to envision how it can further strengthen both organizations’ abilities to inspire curiosity and learning for those in Milwaukee, Wisconsin and beyond."

Additional information about the proposed partnership can be found at: mpm.edu/alliance.